Abstract: Ultimobranchial gland in fishes is associated primarily with calcium regulation. The study was aimed to find effect of an organophosphate pesticide dimethoate on serum Ca2+ and ultimobranchial gland in freshwater catfish Heteropneustes fossilis. Fish were exposed to dimethoate at 2.24 mg/l (75% of 96 h LC50) for short-term (24, 48, 72 and 96 h), and 25% of 96 h LC50 (1.00 mg/l) for long-term (6, 12, 24 and 36 d). The blood samples collected at assigned durations from the anaesthetized fish were used to measure serum Ca2+ levels. At the same time UBG were also extricated from the fish by removing the tissues adjoining esophagus, liver and sinus venosus of the heart for subsequent histological examination. A significant (P<0.05) increase in serum Ca2+ levels of fish following 24 h and 6d dimethoate exposure was observed. However, after 48 h and 12 d the Ca2+level gradually begins to decline exhibiting significant (P<0.0001) hypocalcaemia after 96 h and 36 d in the exposed fishes. The histological examination of exposed fish glands exhibit significant changes in their cellular activity, staining property, nuclear diameter and nuclear volume, vacuolization and degeneration. It is concluded that dimethoate severely hampers the calcium homeostasis in Heteropneustes fossilis; therefore the pesticide should be cautiously used near aquatic bodies.

In vertebrates, calcium plays vital roles in variety of biological functions – cell signaling, neural transmission, muscle contraction, blood coagulation, enzymatic co-factor, membrane and cytoskeletal functions, secretion, bio-mineralization, cell adhesion, acid-base balance, and initiation of many endocrine events. Serum and extracellular calcium concentrations in mammals are closely regulated within a narrow physiological range (between 2.25 and 2.75 mM). Applications of pesticides in agricultural have increased tremendously in recent years and through rain water these pesticides reach aquatic bodies, inadvertently exposing fish and other organisms. Adverse effects of pesticide on fish have been studied by many workers [1, 2, 3]. The pesticides cause disruption in calcium regulating endocrine glands and other vital organs of the fish [1, 2, 3, 4, 5].

The Ultimobranchial gland (UBG) is one of the calcium regulating glands to develop in all jawed vertebrates. It develops embryologically from the epithelium of the last or "ultimate" branchial pouch. The response of UBG after calcitonin administration has been reported in fresh water teleost Cyprinus carpio [6] and Heteropneustes fossilis [7]. Environmental contaminants affect the activity of UBG and thus interfere with the Ca2+ homeostasis in the fish body. There are only limited reports on the effects of toxicants on the UBG under experimental condition [8,9,10,11,12]. Suzuki et al. [13] have reported that tributylin inhibits osteocalcin activity and disrupts calcium metabolism through an increase in plasma calcium and calcitonin levels in teleosts.

In present study, the histopathological alterations in the ultimobranchial glands of freshwater catfish Heteropneustes fossilis were investigated after dimethoate exposure.

2.1. Collection and Handling of Fish

The adult fish comprising both sexes were collected from local ponds and carefully brought to the laboratory, avoiding any injury during transportation. Fish were treated with 0.05% KMnO4 solution for 2 minutes to remove any cutaneous infection. The fish after treatment were kept in plastic tank of 500 L capacity for 14 days to acclimatize under laboratory conditions. They were fed on alternate days with fish-food prepared from wheat flour mixed together with crushed soybean and mustard cake and dried prawn powder in ratio of 3:1:1:1. Food was given in the evening. The leftover food and water from the tank was removed and replenished with fresh water in the subsequent morning. Feeding was stopped 24 h prior to the toxicity test. Fish were exposed to natural photoperiods and were kept at room temperature. The physicochemical parameters such as dissolved oxygen (DO), temperature, pH and hardness (as CaCO3) of the test media were recorded daily according to the standard methods on water quality assessment provided by APHA [14].

The experiments were carried out in glass aquaria of 15 L capacity in static laboratory conditions. The fish approximately of uniform length (17.4 ± 1.14 cm) and weight (27.14 ± 1.95 g) were selected for the bioassay. Fish were not given any food during the experiment.

After determining the LC50 values, fish were exposed to dimethoate for biochemical examinations of serum electrolytes levels and histopathological study of endocrine glands. The fish were subjected to sub-lethal concentration of dimethoate 2.24 mg/l (75% of 96 h LC50) for short term (24, 48, 72 and 96 h), and 25% of 96 h LC50 (1.00 mg/l) for long term (6, 12, 24 and 36 d) exposure. A set of control was run concurrently. Ten fishes from each duration (exposed and control) were randomly selected and anaesthetized with 0.03% MS-222 (tricaine methane sulfonate), and blotted with dry absorbent paper for collection of blood. The blood samples collected in citrated tuberculin syringe directly from the bulbus arteriosus were used to measure serum Ca2+ levels. Serum Ca2+ levels were measured using Erba Mannheim diagnostic kit (Erba Diagnostics Mannheim GmbH, Germany).

For histological examination of the UBG, the tissues from the oesophageal region adjoining the heart (sinus venosus) and connective tissue together with a portion of liver were removed and fixed in Bouin’s fluid. After routine dehydration and embedding in paraffin wax serial sections were cut at 5-6 µm, stained in Haematoxylin - Eosin and mounted in DPX.

To determine the average nuclear diameter of the gland cells, 50 nuclei were randomly selected from every fourth section of the gland and their diameter was measured with the help of oculometer under oil immersion (x1000). In total over 200 nuclei were always measured for each gland. The nuclear volume (NV) was calculated by the formula-

Student's t-test was used to analyze the statistical significance between control and dimethoate exposed fish. All data were presented as mean ± SD of ten specimens and values at P< 0.05 were accepted as significant. 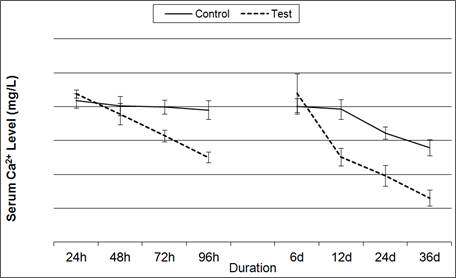 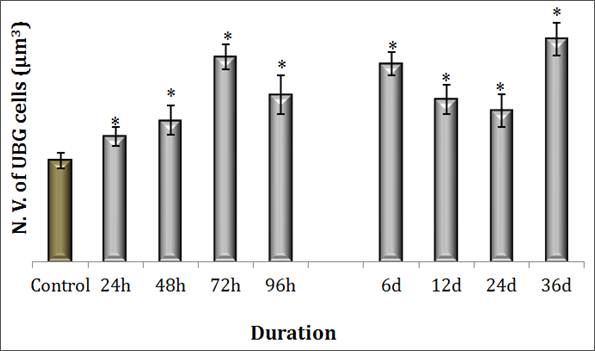 The UBG in Heteropneustes fossilis are present on the abdominal surface of the oesophagus and spread on the septum separating pericardium and viscera. It is located around the oesophageal wall (Fig. 3, 4). The gland comprises a solid parenchymal tissue formed of compactly arranged cell cords which sometimes enclose a lumen or follicle with few disintegrating cells. The cell cords are lined by a thin basement membrane. The cells exhibit differential staining capacity: a large population of darkly stained cells and lesser number of light stained cells (Fig. 4).

In short-term dimethoate exposure the glandular cells of UBG exhibit hypertrophy and an increase in the population of lightly stained cells, after 24 h of treatment (Fig. 5). Following 48 h the UBG exhibits cellular hypertrophy and hyperplasia and dilation of blood capillaries. The population of lightly stained cells is increased as compared to darkly stained cells and the cells show vacuolization and nuclear pycnosis (Fig. 6). After 72 h the nuclei of the glandular cells exhibit further hypertrophy. The cell cords can be recognized by showing shrinkage, appearance of lumen and invasion of connective tissue in between the cords. There is reappearance of darkly stained cells in the gland and blood vessels exhibit further dilation (Fig. 7). The UBG of 96 h exposed fish exhibits reduction in nuclear volume (Fig. 2). There is cellular hyperplasia associated with severe vacuolization leading to follicular degeneration at places. The number and staining capacity of darkly stained cells has increased (Fig. 8).

In long-term experiment, the UBG exhibits nuclear hypertrophy and abundance of light staining cells and increased dilation of blood vessels show after 6 d exposure to dimethoate (Fig. 9). Following 12 d dimethoate treatment the cytoarchitecture of the UBG cell cords is disrupted and there is reappearance of dark staining cells. The light stained cells undergo disintegration and finally collapse in dark masses of cellular debris due to which the nuclear volume records a minor decrease (Fig. 10). After 24 d exposure the gland reorganizes and exhibits a large population of darkly stained nuclei and the nuclear volume undergoes further reduction. The gland shows vacuolization and dilation of blood capillaries. The central portion of the gland shows complete disintegration and collapse of cells (Fig. 11).The ultimobranchial cell cords following 36 d exposure exhibit complete collapse and disintegration. It is very difficult to recognize the cell and measure the nuclear volume. At places where the size of nuclei could be measured, exhibited hypertrophy. The blood vessels show dilation (Fig. 12). 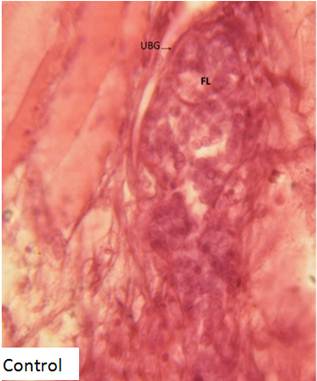 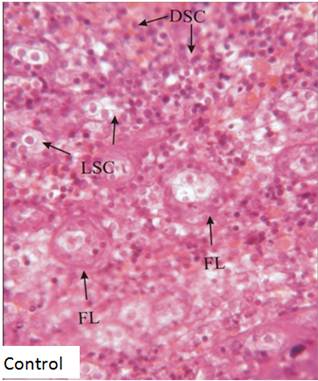 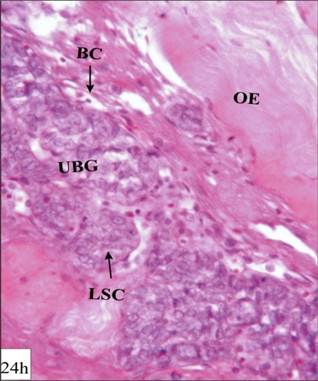 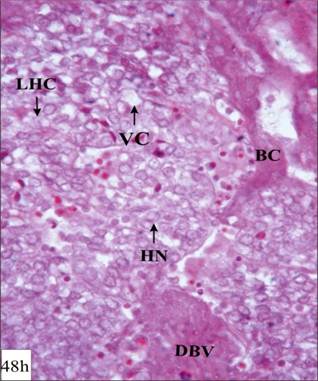 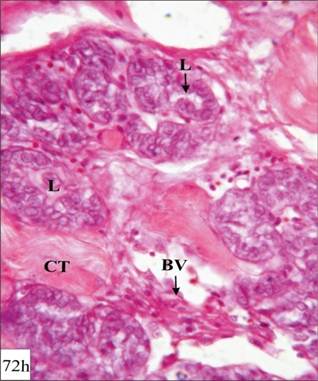 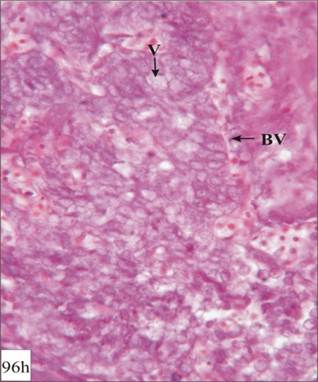 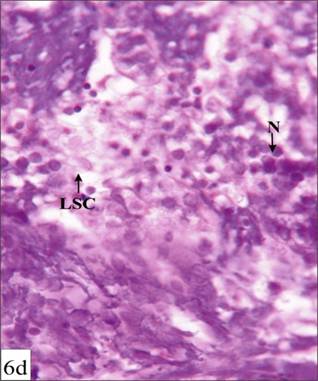 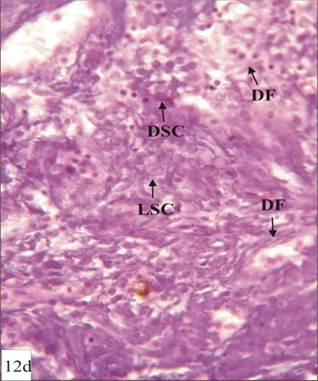 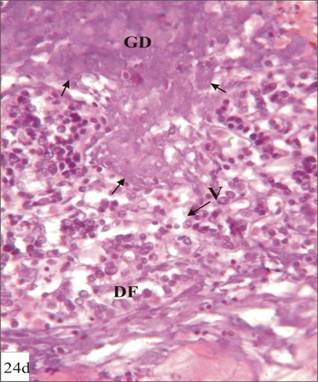 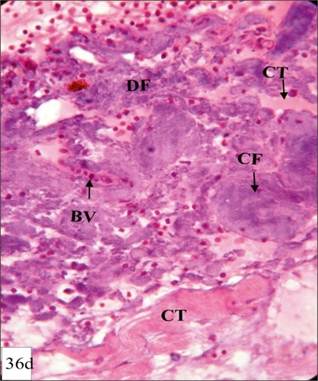 Dimethoate exposure induces hypocalcemia, hyperphosphatemia and hypermagnesemia after short term (75% of 96 h LC50 = 2.24 mg/l) and long term (25% of 96 h LC50 =1.00 mg/l) treatment in Heteropneustes fossilis. Initial increase (at 24 h and 6 d) in calcium level (Fig. 1) may be due to mobilization of calcium from its storage depots (bones and muscles) in order to maintain Ca2+homeostasis and to support certain physiological activities [15]. The decline in calcium over time (Fig. 1) may be an indication of exhaustion of the Ca2+depots and its reduced uptake from gills and kidney tissues due damage induced by the pesticide [16, 17, 18, 19, 20]. Hypocalcemia exhibited by the fish during short term and long term exposure to dimethoate in this study is similar to the observations made by earlier workers with aldrin [21] and also with propoxur and formothion [22]. Hypocalcemia and hypophosphatemia have also been observed in teleosts exposed to cypermethrin, deltamethrin, metacid-50, chlorpyrifos pesticides [1, 10, 23, 24, 25]. Velisek et al. [26] have reported no significant change in Ca2+ and Pi levels in common carp when exposed to deltamethrin, however, a decline in serum Ca2+ levels in a freshwater teleost, Sarotherodon mossambicus when exposed to dimecron was recorded [27]. Recently, Prasad et al. observed a progressive decrease in serum calcium level in Heteropneustes fossilis after 48 h (short term) and 7 d (long term) exposure to E. royleana latex which persisted until the end of the experiments [28]. Endosulfan induces an increase in the level of serum prolactin in fish Sarotherodon mossambicus [29]. Damage in gill epithelium inhibits Ca2+ uptake from the surrounding water resulting into hypocalcemia and respiratory distress together with hyperexitability and body tremor in Heteropneustes fossilis [1, 2].

After short term exposure fish to sub-lethal concentration of dimethoate 2.24 mg/l (75% of 96 h LC50), the UBG shows signs of hyperactivity (hypertrophy and increased NV) up to 72 h (Fig. 2-7). Thereafter, the gland exhibits degenerative signs such as decline in NV and severe vacuolization (Fig. 2, 8). In long term exposure of dimethoate (25% of 96 h LC50 =1.00 mg/l), the UBG gland also undergo hyperactivity after 6 d (increased NV) thereafter the gland exhibits signs of degeneration (the cell cords are disrupted and light stained cells collapse in dark mass of cellular debris) and ultimately the gland disintegrates ((Fig. 9-12). There are reports which confirm our observations that pesticides affect the activity the UBG and cause damage to the gland. Srivastav et al. reported no change in the UBG of Heteropneustes fossilis up to 72 h and 14 d exposure to deltamethrin [8]. However, they reported reduced activity (reduced staining response, decrease in NV, degeneration and vacuolization) of UBG only after 96 h and 28 d of exposure. Similar observations have been made in the UBG hypo-activity of Heteropneustes fossilis exposed to cypermethrin [10] and cadmium [11] for short-term and long-term durations. UBG of chlorpyrifos treated fish exhibits no histological change up to 48 h (short term) and 14 d (long term) but after 72 h and 21 d of chlorpyrifos exposure, the gland exhibits signs of degeneration (reduced staining and decreased NV) which become exaggerated after 96 h and after 28 d with vacuolization and degeneration [9]. The calcitonin of ultimobranchial gland of fish is well known for its hypocalcemic or anti-hypercalcemic action [30,31]. The initial hypercalcemia observed in the present study induces the UBG to secrete more calcitonin and due to which the UBG remains continuously active and gradually becomes exhausted showing collapse of the gland.

Pesticide induced physiological stress manifests in the form of biochemical alterations. It may be concluded from the present study that dimethoate is highly toxic to fish Heteropneustes fossilis and adversely damages the homeostatic balance of body electrolytes, especially Ca2+ and severely affect endocrine glands. Histological damage in ultimobranchial gland results in altered Ca2+regulation after prolonged exposure.

Authors are thankful to the Principal, Kamla Nehru Institute of Physical and Social Sciences, Sultanpur, for providing required research facilities.