Micropropagation is the technique of rapidly multiplying the stock plant material to generate a number of progeny plants, using advanced plant tissue culture methods [1,2]. This method is used to multiply novel plants, such as genetically modified, bred of conventional plant, plants that do not produce seeds etc. [3,4]. The potato (Solanum tuberosum L.) is one of the vegetable plant belongs to Solanaceae family. Conventionally, potato is propagated using tubers that have low multiplication ratio of about 1:4 [5,6]. The current progression in tissue culture techniques, specifically micropropagation led to a new method of propagation through in vitro techniques [7]. The micropropagation medium used for propagation of potato is termed as potato micropropagation medium (PMM). It contains ammonium nitrate and potassium nitrate as the source of nitrate; kinetin and indole acetic acid as the plant growth regulators. Apart from this, it also consists with mineral salts, vitamins, and amino acids, which are required for the proper growth and development of propagated potato tuber [6,8]. Despite lots of advantages of micropropagation technique, it is a costly approach and required extensive care at every step. Therefore, an alternate approach is required, which can enhance the nutrient value and propagation capacity of PMM used for potato micropropagation. Recently, biofield energy treatment has been studied in the several fields and reported as an alternate method for alteration of numerous properties of living organisms and non-living things [9,10].

Biofield energy treatment is the part of energy therapy. The National Institute of Health/National Center for Complementary and Alternative Medicine (NIH/NCCAM) considered the healing energy (putative energy fields) treatment under the subcategory of energy therapies [11]. These energy therapies (healing touch, magnet therapy, bio-electromagnetic therapy etc. involve low-level of energy field interactions [12]. The human body is an incredible biological quantum "machine" possessing the bioenergetics field that has incredible potential. The human bioenergetic field consisted with energy structures like bio-photon [13]. These energy structures contain information, which regulate and help all the system of human body to communicate and work coherently [14]. In the healthy condition, these biophotons are coherent and work with the natural frequencies of our body and the Earth. In diseased condition, these biophotons aren’t ordered, resulting in communication problems among our cells, organs, and energy systems [15]. It is evidently seen in the cancer cells that are so discordant with rest of the cells of the body, resulting in uncontrolled growth and endangering the survival of the body [16]. The practitioners of energy medicine manipulate and balance this bioenergetic field via harnessing the energy from the Universe [17]. Thus, the biofield energy treatment is the process in which, the human harness the energy from environment or universe and transmit to any living or nonliving object on the Globe. Mr. Trivedi is known to possess a unique biofield energy treatment, known as The Trivedi Effect®. Recently, Mr. Trivedi’s biofield energy treatment is reported to increase the overall growth of plants and quality and quantity of plant products like ginseng, blueberry, tomato, etc. even in the absence of pesticides and fertilizers [18,19]. The biofield treated plants exhibited an early tendency of germination, rooting, and rapid maturation. The contents of chlorophyll (a and b), and total chlorophyll were also found increased in the treated plants as compared to the control [20]. Moreover, the biofield treatment has also reported to alter the physicochemical and spectral properties of organic products such as beef extract and meat infusion powder [21].

The control sample was kept without treatment while the treated sample was handed over in sealed pack to Mr. Trivedi for the biofield energy treatment. Mr. Trivedi provided the biofield energy treatment to the treated group via his unique energy transmission process without touching the sample, under standard laboratory conditions. Subsequently, the treated and control samples were evaluated by various analytical techniques such as XRD, DSC, TGA-DTA, UV-vis, and FT-IR spectroscopy.

The XRD study of control and treated PMM samples was done on Phillips (Holland PW 1710) X-ray diffractometer. The system was equipped with copper anode and nickel filter while the wavelength was set to 1.54056Å. The percentage change in average crystallite size (G) was calculated with the help of following equation:

The latent heat of fusion and melting temperature of control and treated PMM were determine with the help of Pyris-6 Perkin Elmer differential scanning calorimeter. The analyte samples were heated at the rate of 10ºC/min under air atmosphere with flow rate of 5 mL/min. An empty pan, sealed with cover lid was used as a reference pan. The melting temperature (Tm) and latent heat of fusion (ΔH) were obtained from the DSC thermogram.

The TGA-DTA analysis of control and treated PMM samples was carried out on Mettler Toledo simultaneous TGA-DTA analyzer. The analytes were heated under air atmosphere from room temperature to 400ºC at the heating rate of 5ºC/min. The onset temperature of thermal degradation and temperature at which maximum weight loss occur (Tmax) in samples were obtained from the TGA-DTA thermogram.

The spectra of control and treated samples were acquired on Shimadzu UV spectrometer (2400 PC). The spectrometer was equipped with quartz cell of 1 cm, a slit width of 2.0 nm, and the wavelength was set to 200-400 nm.

The FT-IR spectroscopy of control and treated samples of PMM was carried out to determine the effect of biofield energy treatment on molecular level like dipole moment, force constant, and bond strength in chemical structure [22]. The samples were prepared by crushing with spectroscopic grade KBr into fine powder and then pressed into pellets. The spectra were obtained from Shimadzu’s Fourier transform infrared spectrometer (Japan) in the frequency region of 500-4000 cm-1. 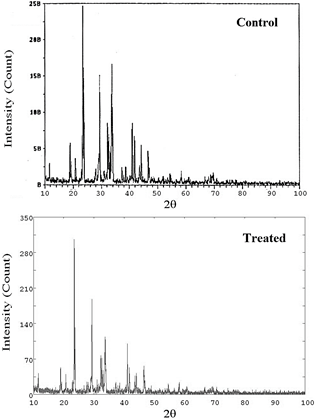 Based on this, it is speculated that biofield treatment might supply some thermal energy to PMM molecules. This might lead to increase the average crystallite size of the treated sample as compared to the control sample.

This might lead to increase the ΔH of treated sample, as it required less energy for phase transition from solid to liquid with respect to the control. Previously, our group has been reported that biofield energy treatment has altered the value of ΔH in lead and tin powders [10]. 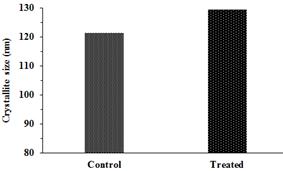 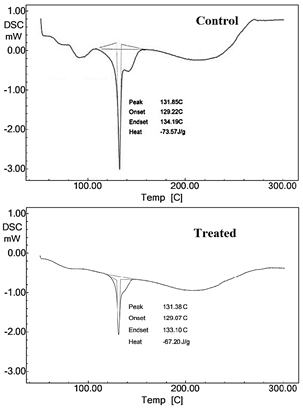 The TGA-DTA thermogram of control and treated PMM samples are shown in Fig. 4, and data is presented in Table 2.

FT-IR spectra of the control and treated PMM are shown in Fig. 5. The PMM is composed with several mineral salts, vitamins, amino acids etc. Due to these different components, it contains several functional groups such as nitrate, sulfate, acids, aromatic ring etc. The FT-IR spectrum of control sample showed the vibrational peak at 3132 cm-1 that might be attributed to aromatic =C-H stretching. The peak was appeared as broad that might be due to overlap with the O-H stretching vibrations. In treated sample, the =C-H peak was observed at slight upstream region i.e. at 3161 cm-1. The stretching frequency of any bond is directly proportional to the force constant and inversely proportional to reduced mass [28]. Therefore, it is presumed that biofield energy treatment might increase the dipole moment of =C-H bond as compared to the control sample. As a result, the force constant and bond strength of =C-H bonds might increase as compared to the control.

The FT-IR spectrum of control sample showed the IR peaks at 1760 cm-1 that was assigned to N=O bond [29]. This might be due to nitrate (potassium and ammonium) component of PMM. The peaks at 1398 and 825 cm-1 were attributed to asymmetric and symmetric vibration of NO3 group, which is also due to the presence of potassium nitrate and ammonium nitrate as a source of nitrogen in PMM. In the FT-IR spectrum of treated sample, these vibrational peaks for N=O stretching, asymmetric NO3 and symmetric NO3 stretching appeared at 1760, 1400, and 825 cm-1, respectively. The result showed the similar pattern of the vibrational frequency of nitrate group in both control and treated samples. The IR peaks at 1679 and 1141 cm-1 in control sample were attributed to C=O stretching and C-O stretching, respectively may be because of glycine present in PMM [30]. These peaks were appeared at the same frequency region in treated sample. The vibrational peak at 1622 cm-1 in both control and treated sample might assigned to aromatic C=C stretching.

The IR peaks at 956-1004 cm-1 were assigned to S=O stretching, which might be due to presence of different sulfates salts such as zinc sulphate, cupric sulphate magnesium sulphate, manganese sulphate, ferrous sulphate etc. in PMM [31]. The peaks due to S=O bond in different sulfates are appeared at similar region i.e. 954-1001 cm-1 in the treated sample. The IR peaks at 603-663 cm-1 region were might be due to the Ca-Cl stretching in both control as well as treated samples of PMM [32]. Overall, the FT-IR study showed shifting of wavenumber of =C-H vibrations that might be due to increase of the force constant and bond strength of =C-H bonds in treated sample as compared to the control. The reset of vibrational peaks were observed at the similar region of IR frequency in both control and treated samples. 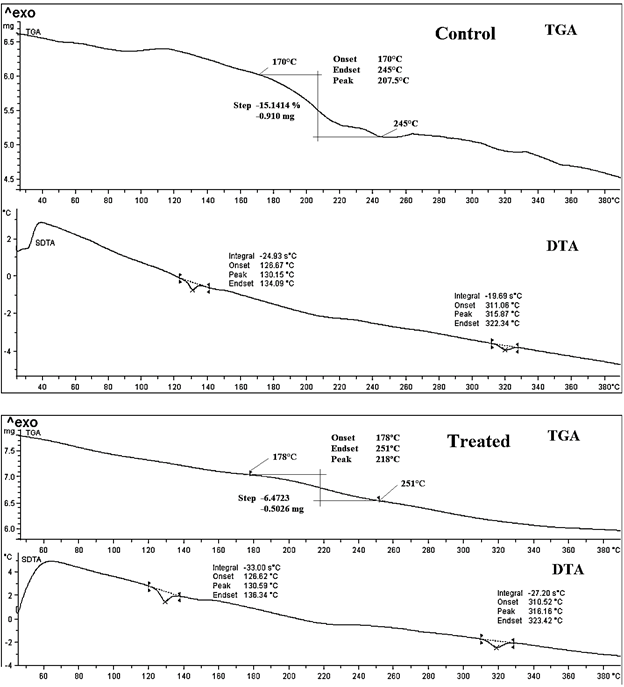 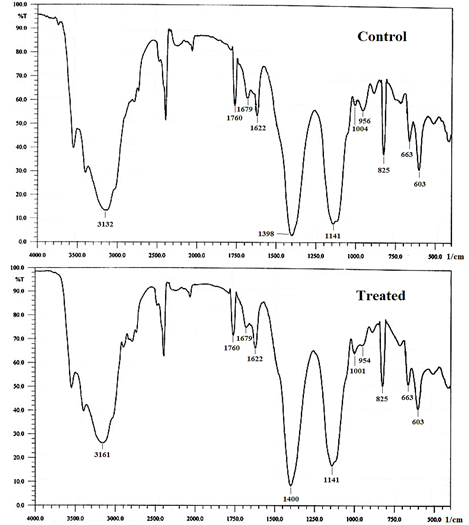 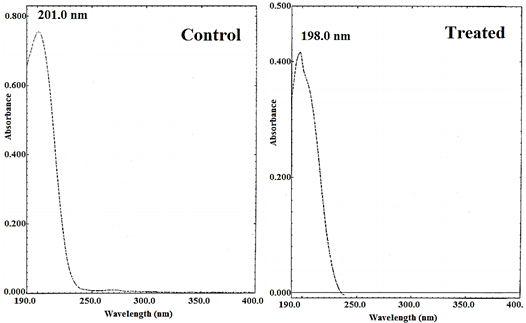 The compound absorbs UV waves due to transition of electrons from stable state i.e. highest occupied molecular orbital (HOMO) to excited state i.e. lowest unoccupied molecular orbital (LUMO). When the HOMO-LUMO gap was altered, the λmax was also altered correspondingly [22]. Based on this, it is presumed the HOMO-LUMO gap in treated sample has been increase, which required higher energy to overcome the electronic transition and thus the λmax was shifted to higher energy (blue shift) as compared to the control.

Overall, data suggest that Mr. Trivedi’s biofield energy treatment showed the considerable impact on the physical, thermal and spectroscopic properties of PMM. Based on this, it is expected that Mr. Trivedi’s biofield energy treatment can modulate the physicochemical properties of PMM so that it could be utilized as a better growth medium for the micropropagation of potato.

The authors would like to thank the Trivedi Science, Trivedi Master Wellness and Trivedi Testimonials for their support during the study. Authors would also like to acknowledge the entire scientific team of MGV pharmacy college, Nashik for allowing the instrumental facility.