Abstract: This paper focused on analysis of fatty acids of erythrocytes and blood plasma in patients with multiple organ dysfunction syndrome. For the study, fatty acids ethyl esters, obtained during sample preparation from blood plasma and erythrocytes, were analyzed by capillary gas-liquid chromatography. Statistical analysis was performed using the Mann-Whitney U test (p<0.05). The conducted research has shown that blood plasma of MODS patients has a decreased relative level of polyunsaturated fatty acids and saturated stearic (C18:0) acid, while there is a significant increase in relative content of monounsaturated fatty acids. In conditions of an increased level of monounsaturated palmitoleic (C16:1) and oleic (C18:1) fatty acids in blood plasma, only the level of palmitoleic (C16:1) acid is increased in erythrocytes. The disorder of lipid composition constancy of erythrocyte membranes is also manifested by a change in the content of saturated palmitic (C16:0) and polyunsaturated linoleic (C18:2) fatty acids. The changes revealed in fatty acid composition of erythrocytes may indicate systemic modifications of cell membranes in multiple organ dysfunction syndrome. The changes in blood plasma fatty acid composition in patients with multiple organ dysfunction syndrome is mainly caused by activation of lipolysis in fat depots.

Despite the considerable number of publications related to the general and specific mechanisms of multiple organ dysfunction syndrome (MODS) pathogenesis, up to the present time in the laboratory practice related to the work of the intensive care units, there are no early markers, clearly indicating the beginning of the disease process, the final stage of which is formation of systemic dysfunction [1-6].

In addition, currently there are no clear biochemical indicators which could be used to reliably establish the severity of MODS, as a result there are difficulties of creating a clinical forecast which is often based on a variety of clinical and functional criteria, and this constitutes the complexity of adequate and timely diagnosis and treatment of MODS [1-6].

In this connection, a promising solution is to create a system of early diagnosis of hypermetabolic syndrome, accessible to every intensive care doctor, enabling therapy correction prior to the development of decompensated multiple organ dysfunction [7,8].

Apart from that, the methods of correction of metabolic disorders accompanying MODS are not sufficiently developed [4,8,9].

At the same time, in the aspect of lipid metabolism research, it is important to study the composition of fatty acids (lipid acyl groups) which make up the structural basis of most lipids and are involved in the metabolic processes, the formation of cell membranes, the process of oxygenation of lipids and eicosanoid synthesis [10].

Objectives: analysis of fatty acids of erythrocytes and blood plasma in patients with MODS.

The blood of 17 practically healthy volunteers aged 38.4±3.3 was used for the control purposes.

The preanalytical stage consisted in the separation of cell components and blood plasma by centrifugation at 5000 rpm for 5 min.

Next, the erythrocytes were rinsed twice in a рН-balanced isotonic solution. Then fixed amounts of blood plasma and erythrocytes were used to obtain solutions of the derivatives of fatty acids and fatty aldehydes through acid ethanolysis followed by extraction with hexane [11].

In order to do this 0.5 cm3 of erythrocyte mass or blood plasma were added to 5 cm3 of ethanol and concentrated (38%) hydrochloric acid (8.75:1.25 in volume). Lipid ethanolysis reaction was carried out at 60ºC for 1 hour in an oven. Thereafter, the samples were cooled at room temperature for 20 min. Next to each sample we added 1 cm3 of hexane for extraction. The extraction was carried out for 10 minutes with gentle stirring. The samples were then left for 15 minutes for the complete separation of hexane and alcohol layers. The extracts were placed into quartz capped vials. Prior to the analysis the samples were stored at -20ºC, and the shelf life was no longer than 1 week.

Next, we carried out an analysis of various acyl moiety (fatty acids) of lipid molecules which were present in the hexane extracts in the form of the corresponding ethyl esters.

The separation of the analyzed compounds was performed using a capillary column which was 60 m long with the internal diameter of 0.56 mm, with the silicone stationary phase SE-30 (the sorbent film thickness was 0.25 micrometers).

The chromatograms were produced with the use of a non-linear program of heating the column thermostat. At the first stage the separation continued for 30 minutes in the isothermal mode at 150°C. Further, the temperature in the column thermostat was raised in several stages (2 and 4 degrees / min) to 260°C.

The quantification of individual fatty acids was carried out by the method of normalization (the peak area in the chromatogram corresponding to a specific fatty acid, was represented as a percentage of the total area of fatty acid peaks).

The area of the peak of a particular fatty acid corresponded to its mass percentage of the total amount of fatty acids (C14:0 to C22:6).

The obtained data was presented in the form of the means of the compared groups and corresponding values of the confidence interval at p=0.05. The normality of the distribution of the values of the variables in the analyzed samples was confirmed by the Kolmogorov-Smirnov and Shapiro-Wilk test (p=0.05).

The evaluation of the significance of differences between the samples was performed using Mann-Whitney U test, which enabled us to handle the samples with a small number of patients [12]. The differences were considered significant at p<0.05.

The study was carried out in accordance with the standards of Good Clinical Practice, the principles of Declaration of Helsinki and was rationally planned minimizing invasive procedures for the examined subjects, since the necessary data could not be obtained without involving people.

The research was conducted to obtain new data on the studied pathology and to achieve the results aimed at improving diagnosis and treatment; it was based on laboratory data and in-depth knowledge of the problem. The expected benefits of research outweigh the potential risk which was minimal and did not exceed the risk that exists when performing routine diagnostic procedures related to biochemical analysis of blood.

Patients with MODS had marked changes in the composition of plasma fatty acids (Figure 1).

Significantly decreased was the relative content of polyunsaturated fatty acids (PUFAs) such as linoleic (C18:2), dihomo-γ-linolenic (C20:3), arachidonic (C20:4) and docosahexaenoic (C22:6) acids, moreover, the relative level of saturated stearic (C18:0) acid was reduced. At the same time there is a significant increase in relative content of monounsaturated fatty acids. Thus, the relative level of oleic (C18:1) and palmitoleic (C16:1) fatty acids in blood plasma is on average one and a half times higher as compared to the value in the control group (Table 1).

Taking into consideration these results, we can conclude that fatty acid composition of blood plasma in MODS patients is shifted toward fatty acids composition characteristic of fat tissue and muscle tissue triglycerides; there is a quantitative domination of monounsaturated oleic (C18:1) fatty acid, but the saturated stearic (C18:0) acid, and especially polyunsaturated fatty acids are significantly less represented [13-15].

Thus, the specificity of fatty acid composition in MODS patients is related to activation of intracellular lipase system. Fatty acids are released into the systemic blood circulation after having being vacated by adipocytes, myocytes and other cellular elements containing neutral fats, which leads to a significant increase in monounsaturated acid level in blood plasma. Since the activation of lipolysis in adipose depots is mainly caused by stress, the levels of monounsaturated fatty acids may reflect the activity of stress reaction to some extent.

Given that the monounsaturated fatty acids in the case of MODS enter the bloodstream primarily from adipose and muscle tissues, it can be assumed that their level reflects the degree of hypermetabolism processes in the body. Therefore, a change in the fatty acid composition of plasma can be used to assess the effectiveness of nutritional support.

Disturbances in lipid metabolism in the case of vascular pathology observed on the background of MODS are registered in the results of erythrocyte fatty acid analysis (Table 2). Thus, in the test group of patients, as compared to the control group there was an elevated level of saturated palmitic (C16:0) acid. The elevated level of this fatty acid is combined with the reduced level of linoleic (C18:2) acid and a three times higher in comparison to the value in the control group level of palmitoleic (C16:1) acid (Figure 2).

Furthermore, two patients with extremely marked changes in the fatty acid composition of blood plasma the level of arachidonic (C20:4) fatty acid in erythrocytes was reduced in comparison to the value in the control group to 26.1% and 27.7%.

Thus, the fatty acid composition in erythrocytes reflects a disbalance of the constancy of the lipid composition of cell membranes in the case of multiple organ dysfunction syndrome. 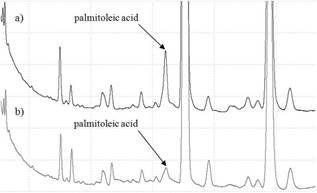 Figure 2. The chromatograms illustrating the level of palmitoleic (C16:1) acid of erythrocytes in multiple organ dysfunction syndrome (a) and in the control group (b).

In general it can be concluded that the blood system decompensation, resulting from critical conditions, require timely metabolic correction aimed at normalization of lipid metabolism. In addition, the identified features in plasma fatty acid composition can be used to develop the criteria for the evaluation of the pathological process. A change in the fatty acid composition of plasma can also be used to assess the effectiveness of the patients’ nutritional support.