Bisphenol A (BPA) is the principal constituent of bottles, metal cans, and plastic food containers. BPA was firstly discovered in 1891 and tested as an artificial estrogen by Charles Dodds in the early 1930s. The occurrence of estrogen-like activity of the xenoestrogen BPA has been recently demonstrated both in environmental and human samples [1]. Previous reports suggest that BPA exposure may stimulate breast cancer progression in vitro [2,3] and animal studies such as in mice [4], rats [5] and rhesus monkeys [6,7]. The synthetic Nonylphenol (NP) has been widely used in manufacturing antioxidants, lubricating oil additives, laundry and dish detergents, emulsifiers, and solubilizers. NP was found that it may interfere with the progress in breast cancer [3,8], ovarian cancer [9,10]. In recent years, BPA and NP extensively are widely found in the environment for its widespread application. BPA and NPare considered weak environmental estrogen, have been shown to stimulate the proliferation of human breast cancer cells, which may induce multiple biological responses and have the ability to influence breast cancer metastasis via through regulating a variety of signaling pathways. However, the underlying mechanism has not been fully elucidated.

Statistics from World Health Organization show breast cancer is the leading type of cancer in women in the worldwide, accounting for 25% of all cases by World Cancer Report in 2014. Previous research show that sex hormones are required for growth and development effects of the reproductive systems and the non-reproductive, and are involved in the biological action of the mammary gland elicited by estrogens and estrogen receptors (ERs) [11,12]. A large quantity of endocrine-disrupting chemicals (EDCs) exert estrogen-like activity and disrupt normal physiological functions regulated by estrogen which can be classified as xenoestrogens, and the xenoestrogens can interfere with estrogen sensitivity and have adverse effects on hormonal and homeostatic systems. Many Xenoestrogens, including BPA and NP, have been traditionally considered to interact with the classical estrogen receptors (ERalpha and ERbeta) [13,14] and the G protein-coupled receptor (GPR30/GPER) [15,16], the nuclear receptors that functions as the master regulator of xenoestrogens regulation. However, while many of whom have not realized that non-nuclear receptor pathways could also mediate cell proliferation signaling until the discovery of tyrosine phosphatase Shp2, a novel membrane receptor, which can enter into the nucleus and play a significant role in endonuclear and extranuclear.

Tyrosine phosphatase Shp2 is a SH2-containing a ubiquitously expressed tyrosine-specific protein phosphatase [17]. Shp2 participates in signaling events downstream of receptors for growth factors, cytokines, hormones, antigens and extracellular matrices in the control of cell growth, differentiation, migration, and death. Activation of Shp2 and its association with Gab1 is critical for sustained Erk activation downstream of several growth factor receptors and cytokines. Our previous research results strongly suggest that tyrosine phosphatase Shp2 mediates the estrogen biological action in breast cancer via Interaction with the estrogen extranuclear receptor. How the Xenoestrogens disrupt endocrine is unclear. In addition, we wanted to establish that BPA and NP, the potential EDCs, may have the ability to influence breast cancer progression via regulating Shp2 and proliferation in breast cancer cells.

Human MCF7 breast cancer cell line was purchased from the Chinese Academy of Sciences (Shanghai, China). The cells were incubated in Dulbecco's modified Eagle's medium (DMEM, Hyclone, USA) supplemented with 10% (vol/vol) heat-inactivated fetal calf serum (FBS), 100 IU /mL penicillinand 100 mg/mL streptomycin. To determine the effects of Xenoestrogens in the media, the cells were pretreated for at least 6 days with an phenol red-free DMEM supplemented with 10% charcoal dextran-stripped FBS prior to experimental treatment.

Total cellular protein was extracted with RIPA buffer at 24 h after the treatment with chemicals of BPA or NP. The cellularprotein samples were stored at −80°C until assaying for phosphatase protein Shp2.

Briefly, the protein samples were separated by 10% SDS-PAGE gel, heated, and then electrotransferred onto nitrocellulose membranes. The membranes were blocked for 2 h with 5% BSA in phosphate-buffered saline (PBS) containing Tween-20 (PBST). The membranes were immunostained with primary antibodies for Shp2 (Santa Cruz Biotechnology, Inc.) overnight at 4°C. And then were incubated with horse anti-mouse IgG secondary antibodies at room temperature for 1 hr. Immunoreactivity was detected by the Western blotting detection kitof ECL (K-12045-D50, Westernbright, advansta, CA, USA).

Data were analyzed by one-way ANOVA using of SPSS 15.0 (SPSS Inc., Chicago, IL, USA). Results were evaluated by as the mean ± SD. Statistical significance was accepted at P < 0.05. 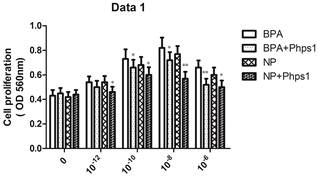 Fig. 1. Histograms demonstrating changes in MCF7 cell proliferation under various concerations of BPA, BPA+Phps1, NP and NP +Phps1. The cell proliferation continually increased from 10-12 to 10-8, and then declined with Phps1 treatment.

These data indicated the Shp2 inhibitor Phps1 was involved in the down regulation of BPA- and NP-induced changes of proliferation in MCF7 cell.

3.2. Changes in Shp2-Expressing in MCF7 Celltreated with Xenoestrogens of BPA and NP

Fig. 2. Characterization of the Shp2expression, as quantified by western blot, under the various concerations exposure to BPA and NP.

It is generally accepted estrogen is responsible for normal reproductive development and fertility, while accumulated exposure to estrogen is a high risk factor in tumorigenesis of the estrogen-dependent organs. EDCs having similar structures to estrogen and may exertestrogen-like activity by interacting with the classical estrogen receptors (ERalpha and ERbeta) [14,18] or through the G protein-coupled receptor (GPR30/GPER) [15,16], which is suspected to promote carcinogenesis by interfering with hormone balance and estrogen signaling [10,15,19]. The previous studies actually have proven these concerns. They are able to exert adverse effects through various mechanisms of action. Moreover, an increasing number of reports show that steady exposure to EDCs may also enhance the risk of cancers [20,21]. BPA and NP are typical EDCs, which are monomers used to a high extent in our life [22]. Experimental laboratory evidence suggests that BPA is harmful to humans, especially relevant to cancers, which is anintense topic of debate[23,24]. BPA exposure is established the contribution to adverse effects associated prostate cancer [25], breast cancer and ovarian cancer [10,19]. It was reported that NP could accelerate cell growth by regulating cell cycle-related genes [26].

It has been well documented that estrogen is a pacesetter of human breast cancer development, and Xestrogens such as BPA and NP are currently under heated argument. This indicates that BPA and NP may stimulate cancer cell growth by a different mechanism. Recently, a new estrogen membrane receptor Shp2 was identified. Tyrosine phosphatase Shp2 has latterly been shown to play a critical role in estrogen signalling and functions in breast cancer development [27-30]. It was also found that Shp2 appears to regulate the Ras-MAPK、PKB/AKT pathway while affecting extracellular-regulated kinase activation by estrogen [29,30], which can bind to the estrogen receptor and IGF-1 membrane receptor, mediated the regulation of estrogen membrane receptor signaling in breast cancer.

Our previous studies suggested that tyrosine phosphatase Shp2 mediates the estrogen biological action in breast cancer [29]. Therefore, in present study, we made further investigation into Xenoestrogen exposure in proliferative activity in MCF7 cells by both MTT assay (cell proliferative activity) and western blot (tyrosine phosphatase Shp2 level). Estrogen-like activity is attributed to EDCs, such as BPA or NP, has been recently demonstrated both in environmental and human samples, but mechanisms of action and diversity of effects are poorly understood. In this study, we used in vitro models to evaluate the actions of BPA, and NP on Shp2 expression. We found that BPA and NP had estrogenic activity and activated functions of Shp2. In addition, both compounds induced the action-mediated response for cell proliferation.

In summary, our results show that exposure to various doses of BPA and NP increase cell proliferation of MCF7 cell and alter tyrosine phosphatase Shp2 expression. These findings emphasize and indicate the involvement of Shp2 in the initiation and development of a variety of breast cancer exposure to BPA and NP.

This work was supported by the Natural Science Foundation of Fujian Province of China (No.2012J01155); the Fundamental Research Funds for the Central Universities.