Abstract: Bacterial leaf blight (BLB) caused by Xanthomonas oryzae pv. oryzae is a devastating disease of rice, the staple food crop of Bangladesh. Under field condition the disease significantly damages the phenotypic characteristics of the plants affecting the yield. An assessment of the phenotypic variations due to the disease in 10 rice lines and 17 rice varieties were studied at the maximum tillering stage in both natural and induced epiphytotic conditions. Along with the indigenous cultivars the test materials including the check resistant and susceptible cultivars were collected from IRRI. Significant differences in both plant height and the number of effective tillers were recorded in the check and inoculated lines and varieties. Among the rice lines, RC222 resulted the maximum reduction in plant height (3.18%) in the inoculated plants whereas RC217 yielded the minimum reduction of 1.27%. Among the rice varieties, Binadhan-8 and Binadhan-10 showed the maximum reduction in plant height (11.43% and 18.22% respectively) for the inoculated plants where IRBB21, IRBB65 and Kumragur resulted 0% reduction. The number of effective tiller among the rice lines, RC251 yielded the maximum reduction of 26.19% in the inoculated plants whereas RC192 showed as minimum as 4.16% reduction. For rice varieties, Binadhan-8, Binadhan-10 and BR-11 yielded the maximum reduction of 52.62%, 50.07% and 50.06% while IRBB21, IRBB65 and Kumragur showed 0 % reduction. The findings of such phenotypic variations may contribute significantly to the selection of best lines and further research to develop the disease free commercial varieties of rice against the disease.

Bacterial leaf blight (BLB) is a destructive disease of rice which is caused by Xanthomonas oryzae pv. oryzae (Xoo.) [1]. This disease is mostly common in rice growing countries in Asia specially where there is irrigated and rainfed lowland [2]. BLB can reduce grain production by 20-50% [3] by affecting the panicle emergence and grain filling. The yield loss can go up to 80% if severely affected which depends on the crop stage, environmental condition and susceptibility [4-7]. Besides different control measures, development of resistant cultivar by breeding technique is the best cost-effective method to approach the disease [8,9].

In this study, an experiment was conducted to ten rice lines and seventeen rice varieties by inoculating with bacterial strain BXO-09 (Xoo.) responsible for BLB disease with an objective to assess the reduction of plant height and tiller number in these rice lines and varieties. For the selection of best rice lines to develop as commercial variety this result can contribute significantly. Moreover, this result may also contribute towards understanding the effect of BLB on the phenotype of the rice plant in terms of plant height and tiller number.

In the experimental field of Biotechnology Division, Bangladesh Institute of Nuclear Agriculture (BINA) the study was conducted. Different rice lines and varieties were taken for the study (Table 1) where the variety IRBB21 and BR-11 were considered as the resistant and susceptible cultivars for check [13-15] respectively.

Table 1. List of lines and varieties of rice used for the study.

2.2. Preparation of Pre-germinated Seeds for Sowing

Collected seeds were heat-treated in an oven set for 5 days at 50°C to break the seed dormancy. The seeds were then soaked in tap water for 24 hours at room temperature, washed and rinsed properly with tap water, placed on petri dishes with moistened filter papers and incubated for 48 hours at 30°C to germinate.

2.4. Sowing of Seeds and Maintenance of Seedlings

Twenty germinated seeds for each lines and varieties were sown in trays following line sowing method. The young seedlings were nursed carefully by following agronomic management practices time to time.

2.5. Preparation of Bacterial Inoculum and Inoculation of Rice Plant

BXO-09, the most virulent strain in Bangladesh [16] was collected from Bangladesh Rice Research Institute. This isolate was maintained and grown on peptone sucrose agar (PSA) medium for 72 hours at 30°C. Then, by mixing the cultured bacteria with 10 ml sterile distilled water, the inoculum was prepared. Prior to inoculation using sterile distilled water, the concentration of bacterial suspension was adjusted to 108 CFU/ml. After preparing the bacterial inoculum, the inoculation of rice seedlings was done following clipping method [17]. After 21 days of inoculation, data was taken for the measurement of phenotypic variation.

Two types of data, plant height and total tillers and effective tillers/hill, were taken in case of measuring the phenotypic variation of rice plant caused due to BLB infection. All these data were taken both from the infected rice plants and uninfected/control plants. Plant height was taken from the ground level to the tip of the main stem at maximum tillering stage of the plant and was expressed in cm. For the measurement of total tillers and effective tillers/hill, total tiller numbers in a hill were counted then total effective tiller numbers in a hill were checked at maximum tillering stage. 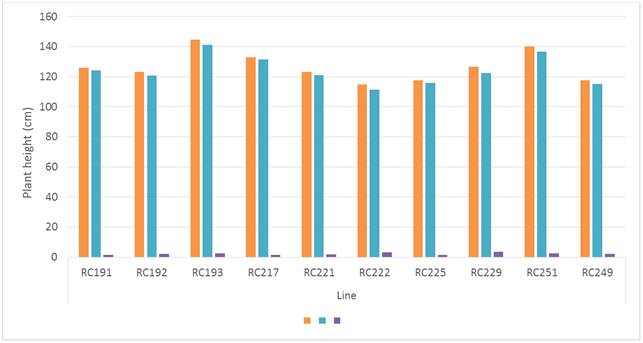 At maximum tillering stage, significant difference in plant height between control and BLB inoculated varieties were also observed. Binadhan-8, BR11 and Binadhan-10 showed maximum reduction in plant height (11.43%, 11.47 and 18.22% subsequently) for BLB inoculated plants where IRBB21, IRBB65 and Kumragur showed 0% reduction from control condition (Table 3). In case of Binadhan-7, Binadhan-11, BR-10 and BR-16, they performed moderate reduction for BLB inoculated rice plants compared to its control condition (Fig. 2). This result is consistent with our previous study which showed that Binadhan-8 and BR11 are the highly susceptible variety [18] and thus may have ultimate effect on plant height and yield generation. Similar findings were observed in another study of Jeyalakshmi et al. (2010) where it was observed that plant height significant varies due different treatments and BLB resistance for that which has direct impact on plant height [12]. 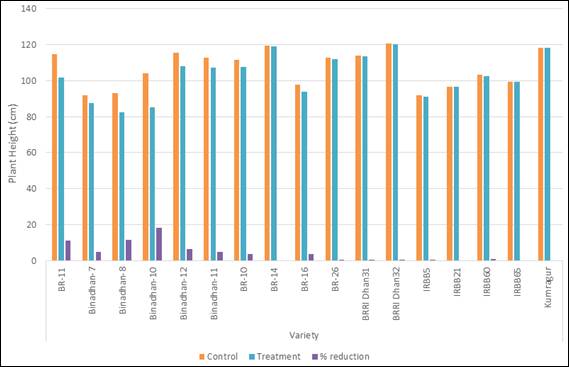 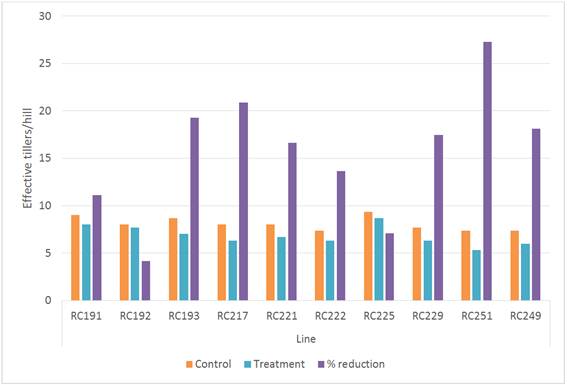 For the rice varieties, Binadhan-8, Binadhan-10 and BR-11 showed maximum reduction in effective tiller number (52.62%, 50.07% and 50.06% subsequently) for BLB inoculated plants (Table 5) where IRBB21, IRBB65 and Kumragur showed 0% reduction from control condition (Fig. 4). This result is consistent with our previous study which showed that Binadhan-8 and BR11 are the highly susceptible variety [18] and thus may have ultimate effect on plant effective tiller number and yield generation. Similar finding was resulted by Jeyalakshmi et al. (2010) where it was observed that plant effective tiller number varies due different treatments and BLB resistance level of the plant [12]. 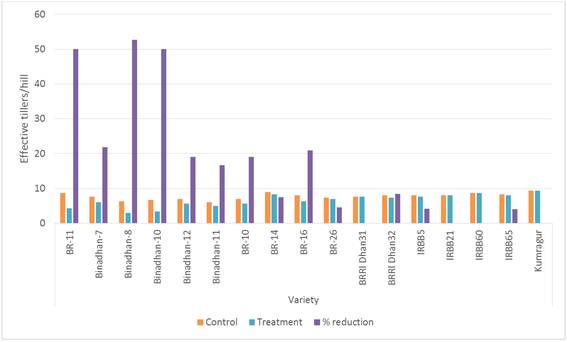 Ten IRRI advanced rice lines and seventeen rice varieties were analyzed to assess the reductions in plant height and effective tiller number due to bacterial leaf blight disease. Rice line RC222 showed maximum reduction in plant height (3.18%) and RC217 showed minimum (1.27%). Also rice variety Binadhan-8 and Binadhan-10 showed maximum reduction (11.43 % and 18.22%) for BLB inoculated plants where IRBB21, IRBB65 and Kumragur showed 0 % reduction. For effective tiller number rice line RC251 showed maximum reduction (26.19%) and RC192 minimum (4.16%). Rice variety Binadhan-8, Binadhan-10 and BR-11 showed maximum reduction in (52.62%, 50.07% and 50.06% subsequently), where IRBB21, IRBB65 and Kumragur showed 0 % reduction among the BLB inoculated rice plants. This result may have significant impact on yield as the plants lost their photosynthetic area to produce grain. Also as the lines are not released as variety yet, this result also contributes to the selection of best lines to develop as commercial variety.