Abstract: Many different biomass of agricultural origin holds remarkable potential for conversion into valuable products thereby presenting a double sharp edge importance of sustainable resource supply and environmental protection. Glutamic acid was produced from rice husk using a novel strain of Corynebacterium glutamicum and effects of parameters optimization such as substrate concentration, temperature, pH and inoculum size were determined during the fermentation process. The wild-type (Novel) strain was inoculated into 13 g/L of the pre-treated rice husk previously added to basal medium (pH 7.2), after which fermentation began. Fermentation broth from each flask was taken aseptically after 96 h and was assayed qualitatively and quantitatively. The acid-treated and alkali-treated rice husk gave the best glutamic acid yield of 10.40g/L and 9.08g/L respectively with the wild-type strain under predetermined optimum fermentation conditions. Out of the four parameters optimized, only substrate concentration was not found to be significant on the performance of the wild-type strain in glutamate production (p ˃ 0.05). Acid-treated rice husk hydrolysate was found to be a better substrate for L-glutamate production by the wild-type strain of C. glutamicum under the optimum fermentation conditions determined.

One of the most importantnon-essential amino acids is L-Glutamate. It is widely used in foods as a flavour enhancer. There is average annual production of about 1.8 million tons of monosodium glutamate via fermentative processes by bacteria of the coryneform group (Nakamura et al., 2006). There coryneforms are commonly found in the soil especially soils that are rich in organic matter. Corynebacterium glutamicum is catalase-producing and break down carbohydrates by fermentative metabolism (Blombach and Seibold, 2010). This organism is also auxotrophic to biotin but secretes L-glutamic acid in response to biotin limitation (Nottebrock et al., 2003). Several different substrates such as glucose, beet molasses and cassava residues are used for the production of glutamic acid. Other cheap agricultural residues such as rice husk and sugarcane bagasse could equally be used as alternative sources of carbon for the production of glutamic acid as reported by Vijayalakshmi and Sarvamangala (2011). Overall, optimum glutamic acid yield is obtained under optimum fermentation parameters irrespective of the strain type; whether wild or mutant forms of any organism capable of producing this particular amino acid.

A total of four differentsoil locations at Samaru village were considered for sample collection to isolate Corynebacteriumglutamicum. A total of eleven soil samples were collected during the period of the study. Five (5) samples from different parts of flower bed around the Department of Microbiology, Ahmadu Bello University, Zaria, and two (2) samples each from paddock, chicken-run and sheep-pen withinSamaru village at a depth of about 10cm. Each sample was packaged in a clean polythene bag, labeled appropriately and then transported to the Department of Microbiology, Ahmadu Bello University, Zaria for analyses.

About 1kg of fresh and fine-textured rice husk was also collected from rice milling station at Samaru village, SabonGari Local Government Area of Kaduna state. The rice husk sample was packaged into polythene bag, labeled appropriately and then transported to the Department of Microbiology, A.B.U. Zaria for analyses.

The method described by Rakesh et al. (2013) was adopted.

A weighed amount of 25g of the fresh rice husk was placed in a 1000mL Erlenmeyer flask and 225 mL of 1.0M KOH solution was added. The flask was cotton- plugged and autoclaved at 121°C for 30 min. The material obtained after treatment was then filtered through muslin cloth and washed several times under running distilled water until no color was visible in the wash water and the pH adjusted to physiological value (7.2). The neutralized residue was then pressed manually to remove excess water and used for the enzymatic hydrolysis (Narasimha et al., 2011). A small portion of the treated biomass was dried in an oven at 70°C for 24 h and was ground to fine particle size in a laboratory mill for the proximate analysis (Rakesh et al., 2013) at the Department of Food Science, Institute of Agricultural Research, Ahmadu Bello University, Zaria.

The method described by Rakesh et al. (2013) was adopted with modifications. About 25g of the rice husk sample was added to a 1000mL flask and about 225mL of 1.0M sulphuric acid was added to the sample. The mixture was autoclaved at 121°C for 30 min and the material obtained after treatment was then filtered through muslin cloth and washed several times under running distilled water until no color is visible in the wash water and the pH adjusted to physiological value (7.2) following calcium hydroxide over-liming. The neutralized residue was then pressed manually to remove excess water and used for the enzymatic hydrolysis. A small portion of the treated biomass was dried in an oven at 70°C for 24 h and was ground to fine particle size in a laboratory mill for the proximate analysis (Rakesh et al., 2013) at the Department of Food Science, Institute of Agricultural Research, Ahmadu Bello University, Zaria.

2.5. Isolation and Characterization of Corynebacterium glutamicum

The following protocols were adopted during isolation and characterization of Corynebacterium glutamicum;

About 25g of each of the five soil samples was separately added to 225ml of sterile distilled water and a tenfold serial dilution was carried out to a final dilution of 10-5 using sterile normal saline. A loopful from each of the 1:102 diluted soil suspensions was separately inoculated onto slants of Loeffler’s medium by streaking. The inoculated slants were then incubated at 35°C for 48 hr. Discrete; well colonies were identified and sub-cultured on modified Hoyle’s medium and incubated at 35°C for 48hr. The isolates were sub-cultured onto nutrient agar slants for subsequent identification and use.

Corynebacteriumglutamicumisolates were primarily identified on the basis of the taxonomic properties such as morphology as well as cultural and biochemical properties (Bergey, 2004).

3. Preliminary Screening of the Isolates for Glutamic Acid Production

One hundred milliliters of screening medium was taken in each 250 ml flask, sterilized and inoculated with 24 hours old bacterial broth culture. Theflasks were incubated on a shaker incubator at 37°C for 96h at 180 rpm. Samples were taken after 96h and centrifuged at 5000rpm for 10 min. Supernatants were then examined for L- glutamic acid.

Qualitative analysis for L-Glutamate was done by paper chromatographic technique as described by Hassan et al. (2003).

About two milliliters of the supernatant from each of the fermented screening medium was taken separately in test tubes and two milliliters of 5% ninhydrin in acetone was added and heated for 15 min in boiling water bath. The tubes were then cooled to room temperature and glutamate was quantitatively estimated by taking readings at 570 nm using spectrophotometer with reference to the standard curve.

About 50ml of the basal medium was mixed separately with 13g each of the acid-pre-treated and alkali-pre-treated substrate (4:1 v/v) in 250ml Erlenmeyer flasks and labeled appropriately. Four (4) ml each of the 18hours-old culture of the wild-type were added appropriately and incubated at 37°C for 96hrs (Ahmed et al., 2013). The qualitative and quantitative analyses of the glutamic acid produced were carried out and results were recorded accordingly.

The glutamic acid produced was qualitatively and quantitatively detected with reference to standard curve.

Data analysis was carried out through a statistical method using SPSS 13.0 software (Levesque, 2007). All the optimization parameters were analyzed by comparison of means through Paired t-test.

Eight isolates were identified; seven of the isolates were confirmed to be C. glutamicum based on cultural, microscopic as well as biochemical characterizations as shown in Table 1.

Various concentrations (1 to 5%) of each of the pre-treated substrates were investigated and it was found that 4% (w/v) of the acid-treated rice husk gave the highest production of glutamic acid (6.37 g/L) after 96 hours of incubation. The alkali-treated rice husk, gave the highest glutamic acid yield of 4.30 g/L at 4% of its concentration after 96 hours of incubation as shown in Figure 2.

Different temperatures (25, 30, 35 & 40°C) were used to determine the optimum temperature for L-glutamate production from wild C. glutamicum with 4% acid-treated and 4% alkali-treated rice husk using 5% inoculum. The maximum glutamate (10.1 g/L) was produced at 30°C. With increasing temperature, a decrease of glutamate yield was found as shown in Figure 3.

The effects of various levels of initial pH (6.6, 6.8, 7.0, 7.2 & 7.4) were investigated by using 4% acid-treated, 4% of alkali-treated and 7% inoculum at 30°C with wild C. glutamicum as fermenting agent. Glutamic acid production of 16.06 g/L and 9.64g/L were observed for acid-treated and alkali-treated rice husk respectively at pH 7.0. Further decrease in glutamic acid yield was found with increasing pH as shown in Figure 5.

Table 1. Cultural, Microscopic and Biochemical Characteristics of the Isolates.

Table 2. Screening for L-Glutamic Acid Production by the C. glutamicumaIsolates.

bData are approximated to 2 decimal places 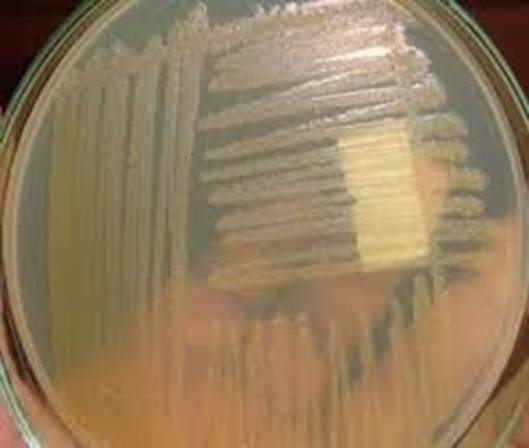 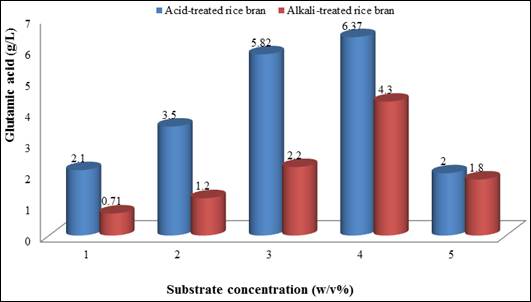 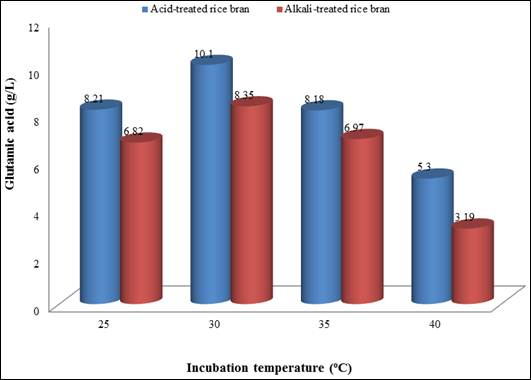 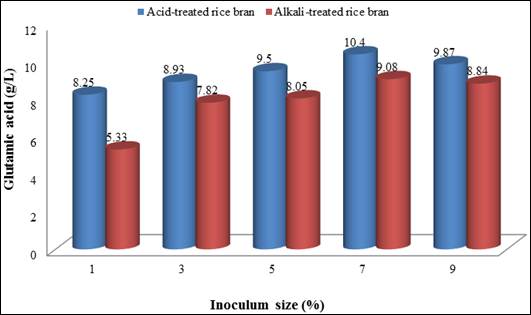 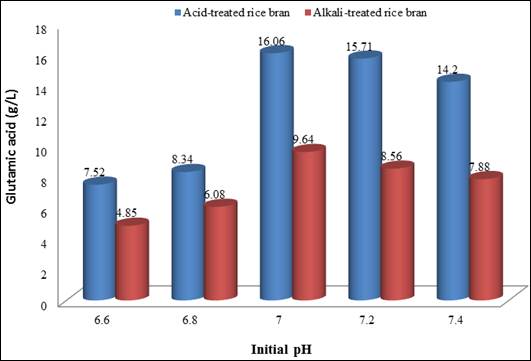 In this study, a total of eleven (11) soil samples from four different locations were used for the isolation of C. glutamicum, of which a prevalence rate of (100%) was obtained with soil from paddock, chicken-pen and sheep-pen whereas soil from flower bed had the least prevalence of 20%. This might be due to the richness in the nutritional composition of the humic soil from the animal houses, whereas, the flower bed might have little organic matter as nutrient to the organism. This agrees with the findings of Zahoor et al. (2012) who reported a higher isolation rate (15.6%) from organically-rich soil than from nutrient poor soil with 5.74%. Out of the seven isolates confirmed to be C. glutamicum and screened for L-glutamic acid production, highest yield of glutamic acid of 0.25g/L was produced bythe isolate from chicken-pen (SFCD2) whereas,isolate named SFSD2 from sheep-penwas found to produce the lowest glutamic acid yield of 0.12g/L. This observed difference in glutamic acid yieldmight be due to the variability and adaptability in terms of the nutritional diversity of C. glutamicum as it is usually associated with the nature of the environment from which they were previously isolated. The highest glutamic acid yield obtained with SFCD2 in this study, is much lower than that obtained by Hadia et al.(2012) who reported a concentration of 1.5g/L after screening. This difference may be accounted for by the higher biotin concentration of 200µg used in this study as opposed to the lower concentration of 50µg used by Hadia et al. (2012).

The results of these present findings showed that the yields obtained with the wild-type from acid-treated hydrolysate (10.10g/L) and alkali-treated hydrolysate (8.35g/L) at 30°C were all found to be significantly higher (P< 0.05) than those obtained at other temperatures. This is because cardinality of temperature plays a very important role in the growth and metabolism of an organism. Thus, growth and metabolic functions at extreme temperatures are greatly inhibited and sometimes become almost impossible. At low temperatures, enzymes get inactivated while membrane lipoproteins which are important in glutamate excretion become hardened. While, at extreme temperatures, enzymes and membrane proteins get denatured and therefore loss their activities. The results of present study are in line with the work of Sthiannopkao et al. (2001).

On the other hand,the yields obtained with the wild-type from acid-treated hydrolysate (16.06g/L) at pH 7.0 were all found to be significantly higher (P< 0.05) than those obtained at other pH, whereas, the yield obtained at the same pH of 7.0 with alkali-treated hydrolysate (9.64g/L) was not statistically significant (P = 0.629) as shown in Figure 4. The reason might be due to the physiological nature of the pH 7.0 at which best metabolic functions are carried out. Extreme pH of the fermentation media might have negatively affected the membrane stability (membrane fluidity), enzymatic activities as well as transport of nutrients for growth and metabolism, hence low yield of glutamate recorded.

Of all the inoculum sizes(1, 3, 5, 7 and 9%) used in this study, the trend of glutamic acid production under pre-determined optimum conditions showed that highestglutamic acid yield(10.40 g/L) was obtained from acid treated substrate than the alkali treated substrate (9.08g/L) by the wild-type strain with 7% of inoculum (p ˂ 0.05). This might not be unconnected with the density-dependent bacterial communication (Quorum sensing) based on which metabolic functions of a microbial entity are determined.

The use of rice husk as a locally available and nutrient-rich raw material when treated with acid could enhance glutamic acid production by the wild-type strains of C. glutamicum, and this would be of economic and environmental benefits through the establishment of cost-effective local glutamic acid industry in Nigeria as well as cleaning the environment of agricultural wastes.