Abstract: Background: Preclinical and animal studies provide considerable hope for stem cell therapy in cerebrovascular stroke. This study was designed as a pilot study to explore this provisional data. Autologous bone marrow derived mesenchymal stem cells were chosen due to their proven angiogenic, paracrine and neuroregenerative functions. Subjects and Methods: The present study included 32 patients with ischemic stroke fulfilling the following criteria: Inclusion Criteria: 1. Patients with established stroke in the distribution of the middle cerebral artery territory. 2. Six months at least after the onset of acute ischemic stroke. 3. CT brain at the onset denoting acute ischemic stroke. Exclusion Criteria: 1. Hemorrhagic stroke. 2. Conditions which mimick stroke,e.g., multiple sclerosis, vasculitis, arteriovenous malformations, trauma, tumours. Patients were randomly divided into control group (11 patients) and study group (21 patients) which was further divided according to the time between the onset of the stroke and the beginning of the study into: Group I : onset of the stroke and the beginning of the study :6-12 months( 12 patients: 6 males and 6 females). Group II: onset of stroke and the beginning of the study :13-36 months (9 patients: 5 males and 4 females). Control Group: 11 stroke patients : 6 males and 5 females. Time from onset of stroke to beginning of the study ranged from 6-30 months. Both study and control group were subjected to thorough clinical and laboratory assessment , CT brain, National institutes of Health Stroke Scale (NIHSS) and th Barthel active daily life (ADL) scale at the start of therapy, and at 1,3,6 and 12 months after the start of therapy. Stem Cell Injection: 10 million autologous bone marrow-derived MSCs were injected via lumbar puncture in the study group. Results and Conclusions: Changes in Follow-up Parameters: 1. Changes in NIHSS score: Control group showed non-significant decrease in NIHSS score starting from the 3rd month. On the other hand, study group showed highly significant decrease in NIHSS score starting from 6th month, more in group I. 2. Changes in ADL score: ADL score showed non-significant increase starting from 3rd month in the control group, while it showed a highly significant increase in the study group starting from 6th month, more pronounced in group I. Intrathecal administration of MSCs is safe and enhances regeneration in ischemic stroke patients.

Stroke is one of the leading causes of death worldwide, with approximately 15 million victims each year. Paradoxically, and despite this high mortality, 76% of stroke patients survive, suffering from variable disability (1).

The pathologic changes occurring in stroke are precipitated by the reduction in oxygen and glucose availability, resulting in apoptosis through a number of mechanisms (2). Subsequent reperfusion causes the egress of inflammatory leukocytes and activation of chemokines such as IL-8 and monocyte chemotactic protein-1 (3). Leucocytes secrete reactive oxygen species and metalloproteinases which may augment tissue damage. Inflammatory response is then limited through local anti-inflammatory mediators such as annexin A1 and lipoxin A4 which promote apoptosis and phagocytosis of resident leukocytes releasing anti-inflammatory cytokines suh as IL-6 and IL-10 (4). This complex pathogenesis opens the door to a variety of proposed therapeutic agents all under trial.

Current therapeutic modalities for stroke is far from satisfactory. The only accepted treatment for ischemic stroke is tissue plasminogen activator administered within 3 hours of the incident (5). Trials exploring the use of NMDA antagonists (6) to block initial triggering of apoptosis, thrombin inhibitors for secondary prevention (7) as well as prevention of leukocyte recruitment through ICAM inhibitors (8 & 9) have been described.

Ideally, therapeutic approaches should target stopping cell death and stimulation of tissue regeneration. The ultimate goal of cellular therapy for stroke is to replace dead neurons, remyelinate severed axons and repair damaged neural circuits (10). The potential of stem cell therapy in tissue regeneration is backed by extensive evidence in animal and human studies. The mechanisms of stem cell induced regeneration include activation of endogenous neurogenesis (11), secretion of trophic factors (12), enhancement of cerebral angiogenesis(13) or transdifferentiation into target cells (14).

Stem cells are a diverse entity with variable sources and functions. Endothelial(15), fetal neural stem cells (16), mesenchymal stem cells (MSCs) (17-20) and induced pluripotent stem cells (21) were proposed as possible therapeutic candidates. However, for ethical and immunological privileges, adult mesenchymal stem cells were the cells of choice. MSCs represent a population of multipotent adult stem cells that can be isolated from many tissues, most commonly bone marrow and adipose tissue. MSCs exhibit a number of properties that make them ideal candidates for cellular therapy. First: MSCs can be isolated and expanded to give the needed therapeutic dose. Second: they show remarkable transdifferentiation ability, even to tissues outside their normal repertoire : osteoblasts, chondroblasts and adipocytes. Third:  they stimulate angiogenesis. Fourth: they secrete a number of cytokines enhancing regeneration and reducing apoptosis. Lastly, they stimulate proliferation and differentiation of endogenous stem cells(17-20).

The aim of the present work is to assess the efficacy of bone marrow-derived mesenchymal stem cell therapy in ischemic stroke patients by intrathecal injection.

1.   Patients with established stroke in the distribution of the middle cerebral artery territory.

2.   Six months at least after the onset of acute ischemic stroke

After signing informed consent, patients were randomly assigned to study and control groups.

Which was subdivided according to the time between the onset of the stroke and the beginning of the study into two groups:

Group I : in which the time between the onset of the stroke and the beginning of the study was 6-12 months. This group included 12 patients: 6 males and 6 females.

Group II: in which the time between the onset of stroke and the beginning of the study was 13-36 months. This group included 9 patients: 5 males and 4 females.

Included 11 stroke patients : 6 males and 5 females. Time from onset of stroke to beginning of the study ranged from 6-30 months, with the same inclusion and exclusion criteria as the study group.

Both study and control group were subjected to the following :

·     Under complete aseptic conditions and local anesthesia, 60ml of bone marrow were aspirated from the posterior iliac spine on preservative free heparin.

·     Mononuclear cells were seeded in T25 flasks in the presence of antibiotics and antimycotics in DMEM. Flasks were incubated at 37ºC in 5% CO2 incubator.

·     After 48 hours, non-adherent cells were removed, complete medium added, and medium was changed every 3 days.

·     Cells were washed, counted and tested for viability.

·     Cell density was adjusted to 2 million/ml

2.6. Characterization of the Stem Cells Injected

MSCs were identified according to the minimal criteria proposed by the International Society of Cell Therapy which are: morphology, immunophenotyping (was done using the MSC identification kit (R&D)) and trilineage differentiation potential.

Under aseptic conditions, 10 million MSCs were injected via lumbar puncture.

Demographic characteristics of the patient and control groups are listed in Table (1).

Table (2) shows the initial clinical evaluation of the study group.

3.2. Characterization of the Stem Cells Injected

Morphology and immunophenotyping of the cells is shown in Figure (1).

Table (3a). Changes in NIHSS score in Control group over the follow-up period.

Table (3b). Changes in NIHSS score in Study group I over the follow-up period. 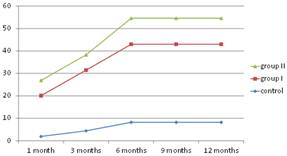 Figure (2). Difference in Percentage of change in NIHSS score between patients and control.

Table (4a). Changes in ADL scores in the control groups over the follow-up period.

Table (4b). Changes in ADL scores in the Study group I over the follow-up period.

Table (4c). Changes in ADL scores in the Study group II over the follow-up period.

Comparing the three study groups, the percentage of changes in NIHSS and ADL scores are shown in figure (3). 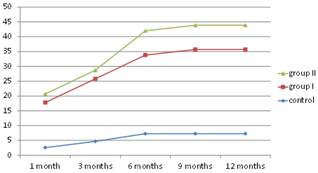 Figure (3). Difference in Percentage of change in ADL score between patients and control.

Current management of ischemic stroke focuses on preservation of tissue perfusion through recanalization or tissue plasminogen activator administration. Approach to neuronal repair is essential to minimize disability after ischemic insult (22). Cellular therapy is emerging as a potentially important line of therapy in both neuroprotection and neuroregeneration. The use of MSC is superior to other bone marrow cells such as CD34+ve cells and endothelial progenitors in many aspects: easier isolation protocols, more efficient expansion, in addition to the wider spectrum of activity covering all of the mechanisms of cellular induction of neuroregeneration (23). MSCs are also superior to neural stem cells as they are autologous, eliciting no immune response. Moreover, MSCs can function as stimulant of angiogenesis, anti-apoptotic and paracrine action; which is not applicable with neural stem cells.

A number of clinical trials were designed to evaluate the efficacy of cellular therapy in ischemic stroke. These trials explored a number of variables namely cell type, source, route of administration and cell dose. Cell types used were mesenchymal stem cells ,CD34+ve cells, neural stem cells, endothelial and mononuclear cells.  Source of the cells were allogenic, or autologous cells , bone marrow, umbilical cord blood or adipose tissue. Route of administration is either systemic intra-arterial, intra-carotid, or intracerebral. Cell dose ranged from 2 to 20 X 106 (23, 24)

In a trial to reach consensus on cellular therapy for stroke patients, STEPS I and II guidelines were proposed regarding clinical trial setting: patient selection, cell type, dosing and route of administration in stem cell therapy for stroke (25) .

This study was designed to evaluate the safety and short term efficacy of autologous bone marrow derived mesenchymal stem cell therapy delivered intrathecally in cases of ischemic stroke. In this study, evaluation was done using NIHSS score an ADL scale. Collective patient group showed improvement in NIH+SS and ADL scores starting from first month and steadily improving until stabilizing starting from 6th month. This improvement showed statistically significant difference from the control group. However, the improvement was not significant in group II (chronic group). when studied alone.

The difference in therapeutic improvement between acute and chronic groups may be due to the weaning of the inflammatory and apoptotic signals in the chronic phase, which form the main chemotactic molecules enhancing homing and proliferation of injected stem cells.

The mechanism of therapeutic action of stem cells in neuronal injury is most probably a combination of functions: reduction of apoptosis and hence inflammatory response, stimulation of endogenous neurogenesis, induction of angiogenesis and formation of new neuronal connections (23) in addition to the paracrine action (26).

In this work, the choice of bone marrow derived MSCs was because of the extensive literature documenting their effectiveness in all the proposed mechanisms of actions in neuroregeneration (27).

MSCs were isolated from autologous bone marrow as this is the least invasive and safest source (28).

The intrathecal route of administration was chosen because of the simplicity, safety, and proven efficacy in other cerebral trials (29).

The only trial reporting the use of intrathecal route for cell delivery is that of Reabinovich et al (2005) who used a poorly identified cell population consisting of a mixture of immature nervous and hemopoeitic cells (37).

No adverse events were encountered, apart from mild headache which responded to regular analgesics