Abstract: Polyphenol oxidases (PPO) are group of copper proteins, widely distributed phylogenetically from bacteria to mammals that catalyze the oxidation of phenolics to quinones which produces brown pigments in wounded tissues. PPO was isolated and partially characterized in white and yellow bitter yam (Discorea dumentorum). Extracts were partially purified using ammonium sulphate. The effects of optimum pH and temperature were investigated, while thermal and pH stability was also determined. The substrate specificity, kinetic and inhibition studies were also carried out. The optimal pH in the absence and presence of SDS were found to be 5.0 and 6.0, and 6.0 and 8.0 for white and yellow bitter yam respectively, while the optimum temperature for both white and yellow bitter yam was at 30°C. The enzyme was stable with over 90% activity after 3 hours incubation time at pH of 4.0 and 5.0, and 4.0 for yellow and white bitter yam respectively. The enzyme revealed over 70% remaining activities at all temperature investigated for yellow and at 30, 40 and 50°C for white bitter yam after 1 hour incubation. The Km values of 6.8 x 10-2mM and 8.0 x 10-2mM, and 3.3 x 10-1mM and 4.0 x 10-1mM with L-DOPA and tyrosine as substrates for PPO from white and yellow bitter yam respectively. Higher activity was observed with L-DOPA than with tyrosine.

Bitter yam (Discorea dumentorum) is of major importance as food in Nigeria and many other tropical countries. They are perennial through root system but are grown as annual crops [2]. Bitter yam is more popular as vegetables in parts of West Africa than any other yam species in the World. It is a native to West Africa, today the dumetorum remains one of the principal yam cultivated in west Africa because its requires less labour than other yams. It is the third most important tropical root and tuber crop after cassava and sweet potato [9]. The crop is of major importance in the diet and economic life of people in West Africa, the Caribbean islands, parts of Asia, and Oceania [11,23]. Besides fulfilling some physiological needs, it is capable of delivering health benefit due to the presence of antioxidant properties [1]. The yam tuber, which is the most important part of the plant, can be stored longer than other root and tuber crops, ensuring food security even at times of general scarcity However, damage incur by yam tubers in the cause of harvesting, storage and processing leads to adverse oxidative browning cause by polyphenol oxidases as being an economic problem for both the producers and consumers.

Polyphenol oxidases (PPOs) are a group of copper-proteins, widely distributed phylogenetically from bacteria to mammals, that catalyze the oxidation of ortho-phenolics compounds such as caffeic acid and catechol to their respective quinones which produce brown pigments in wounded tissues [16]. These highly reactive PPO-generated quinones polymerize with other quinones, amino acids and proteins, leading to the production of black, brown and red pigments usually observed in damaged plant tissues and plant extracts. The obvious pigments are generally undesirable and responsible for unpleasant sensory qualities as well as losses in nutrient quality in food products. This explains why phenolic content and PPO activity have been considered major determinants in the quality of fruits and vegetables [14]. In intact tissues, PPO and its polyphenolic substrates are found in separate compartments, plastids and vacuoles, respectively [16], thus no reaction occurs. The disruption of the cell integrity that occurs naturally during senescence and as a result of physical damage plant tissues bring PPO into contact with its substrates producing the so-called enzymatic browning observed in overripe fruits, bruised tissues, freshly cut fruits and vegetables and also in diseased and physiopathy tissues [27].

About 150g of each yam species (peeled) was thoroughly homogenized in 450ml of ice cold 25mM phosphate buffer (pH 6.8) containing 10mM ascorbic acid using a warring blender for 3min with a 60 seconds resting period to avoid local elevation in temperature. The mixture was filtered using four layers of cheese cloth. The filtrate obtained was centrifuged in a refrigerating centrifugeat 6,000 rpm (revolutions per minute) for 30 min at 4°C. The supernatant obtained was stored in a freezer and used as crude extracts for further studies.

Supernatant obtained (175ml) from each species was brought to 80% ammonium sulphate (NH4)2SO4 saturation by slowly dissolving solid ammonium sulphate using magnetic stirrer. The precipitate was separated by centrifugation at 6,000 rpm for 30 minutes. The precipitate was dissolved in 0.1M phosphate buffer (pH 6.8) and dialyzed at 4°C overnight with three changes of buffer. The dialyzed samples were used as the polyphenol enzyme source in further experiments.

Polyphenol oxidase activity was determined by measuring the initial rate of quinone formation, as indicated by an increase in absorbance at 475 nm, using visible spectrophotometer. Change in absorbance was recorded after incubation at room temperature for 10mins [4]. The sample cuvette contained 0.7 ml of 10mM 3, 4-dihydrophenylalanine (DOPA) solution in 0.1 M phosphate buffer (pH 6.8) and 0.3 ml of the enzyme solution. The blank sample contained only 0.7 ml of 10mM 3, 4-dihydrophenylalanine and 0.3ml of 0.1M buffer solution. One unit of polyphenol oxidase activity was defined as the amount of enzyme that caused a change in absorbance of 0.001 per minute.

2.3.3. Effect of PH on Polyphenol oxidase Activity in Presence and Absence of SDS

Effect of pH on polyphenol oxidase activity in presence and absence of SDS was carried out according to the method of Escribano [6], in buffer pH range 4.0-9.0, using 0.1 M acetate (pH 4.0–5.0), 0.1 M phosphate (pH 6.0–7.0) and 0.1M Tris/HCl (pH 8.0-9.0). The reaction mixture in presence of SDS contains 0.69mM of the detergent while polyphenol oxidase activity was assayed according to standard assay procedure earlier described.

The assay mixture containing the polyphenol oxidase and L-DOPA was incubated for 10mins at different temperature of 30 to 80°C at 10°C temperature interval. The absorbance reading was taken at 475nm according to standard assay procedure.

Thermal stability of the enzyme was determined by incubating the enzymes solution in 0.1 M phosphate buffer at pH 6.8 for 1 hour at different temperatures ranging from 30 to 80°C at 10°C temperature interval. The residual polyphenol oxidase activity was determined at 19mins time interval for I hour incubation period.

Substrate speciﬁcity was determined by using 2 different substrates (Tyrosine and L- DOPA). 10mM of each substrate was prepared in 0.1 M phosphate buffer (pH 6.8). Enzyme activity was assayed as according to standard assay procedure earlier described.

Protein concentration was measured according to the Bradford method [3] using bovine serum albumin (BSA) as a standard.

2.3.9. Effect of Inhibitors and Activator on the Enzyme Activity

The activity of the crude enzyme (Polyphenol oxidase) from white Discorea dumentorum and yellow Discorea dumentorum were 29 and 45.1 units/ml while the activity of the partially purified were 43 and 117.5units/ml respectively. The protein contents of partially purified enzyme from white and yellow Discorea spp. were 0.34mg and 0.37mg while its specific activities and percentage yield were found to be 126.5 and 39.3%, and 317.6 and 67% unit/mg respectively. This is in agreement with the report of Muzac-Tucker [21] who stated reports from several authors explain the variances of PPO activity within the same species.

3.2. Effect of pH in the Presence and Absence of SDS on the Activity of Polyphenol oxidase

The effect of pH in the absence and presence of SDS on the activity of the Polyphenol oxidase of white and yellow Discorea dumentorum were shown in figure 1a, 1b, 2a and 2b. Optimum pH of activity for polyphenol oxidase from white bitter yam was observed at pH 5.0 while two optima pH of 6.0 and 8.0 was observed for polyphenol oxidase from yellow bitter yam. Yoruk and Marshall [37] reported that pH optimum of polyphenol oxidase varies widely with plant source but is generally in the range of 4.0 - 8.0. Some plants show optimum pH in the acidic region for example, pH 4.5 for cherry and strawberry with 4-methyl cathecol as substrate [8], pH 3.5-4.5 for apple and grape [17], pH optimal reported by Fraignier [8] for fruits including almond, apricot, peach and plum is similar to that observed for Polyphenol oxidase from white bitter yam in this study (pH 5.0). Harel [12] and Wong et al., [33] stated that the two pH optima in yellow bitter yam maybe due to PPO isoforms. The optimum pH for maximum PPO activity was also subject to changes when assayed in the presence of the modulator, SDS. With few exceptions, most enzymes are inactivated by SDS. Some of these exceptions include enzymes which are activated by SDS, such as pancreatic lipase [5], pyruvate oxidase [27], tyrosinase [35], and polyphenol oxidase [31,14,7]. Broad bean polyphenol oxidase, exists in a latent state and can be activated several fold by SDS [7]. 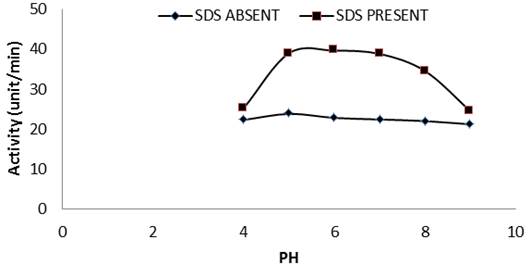 Figure 1a. Show the effect of pH on the activity of the enzyme in presence and absence of SDS. 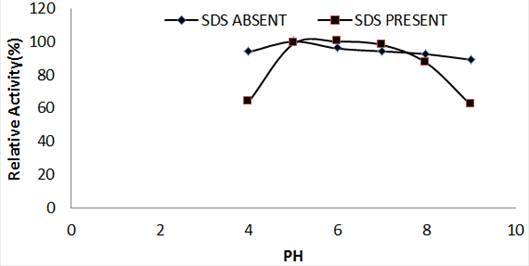 Figure 1b. Show the effect of pH on the enzyme relative activity in the presence and absence of SDS. 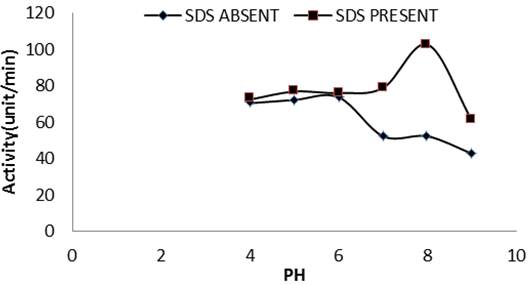 Figure 2a. Show the effect of pH on the activity of the enzyme in presence and absence of SDS. 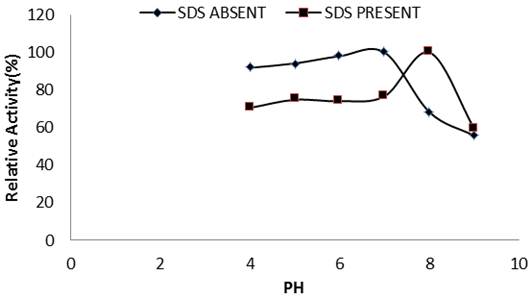 Figure 2b. Show the effect of pH on the enzyme relative activity in presence and absence of SDS.

3.3. Effect of Temperature on the Activity of Polyphenol oxidase

Figure 3. Effect of Temperature on the activity of polyphenol oxidase from white and yellow bitter yam.

Figure 4a. Show the thermal stability of white bitter yam.

Figure 4b. Show the thermal stability of yellow bitter yam. 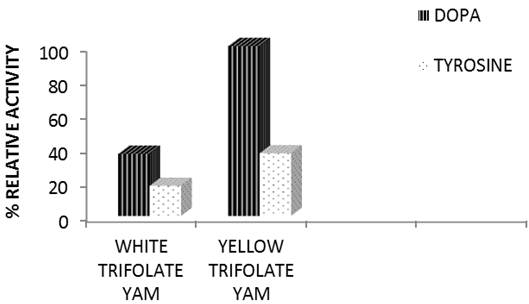 Figure 5. Effect of Diphenol and monophenol on the activity of polyphenol from white and yellow bitter (Trifoliate) yam.

Effect of different reagent on the polyphenol oxidase from yellow Discorea dumentorum and white Discorea dumetorum showed that of the inhibitors used, ascorbic acid was found to be the most effective, followed by benzoic acid, EDTA and SDS appears to activate the enzyme. The result of this finding is in agreement with Umit Unal [32] results in which tea PPO was inhibited by ascorbic acid. However, SDS was found to activate PPO from both species of bitter yam in this research which is in agreement with finding of Moore and Flurkey [20]: that little activation occurred until 0.44mM SDS.