Abstract: Liver is a metabolically active organ responsible for many vital life functions. More than 900 drugs, toxins, and herbs have been reported to cause liver injury. In spite of tremendous advances in modern medicine, there are hardly any reliable drugs that protect the liver from damage and/or help in regeneration of hepatic cell. It is, therefore, necessary to search for effective and safe herbal drugs for the treatment of liver disease. In the present study, we investigated the hepatoprotective activity of ethanolic extracts of various fractions (Ethyl acetate, Petroleum ether and Chloroform) of Lowsonia inermis leaves in carbon tetrachloride (CCl4)-induced hepatitis rats. Hepatotoxicity was induced in rats by intraperitoneal injection of CCl4 on alternate days for 7 days. After 7 days of pretreatment of test extracts, the biochemical markers such as Serum bilirubin, Serum Glutamic Pyruvic Transaminase (SGPT), Serum Glutamic Oxaloacetic Transaminase (SGOT) and Alkaline Phosphatase (ALP), were examined. The extracts at the doses of 200 mg/kg p.o. significantly (P < 0.05) reduced the elevated levels of Serum bilirubin, SGPT, SGOT and SALP compared to the CCl4-treated group alone. The findings of the study indicate that the leaf extract of L. inermis showed a potential hepatoprotective activity and the protective action might be manifested by reducing the oxidative stress as the leaf extracts possess flavonoid and phenolic compounds which have free radical scavenging and antioxidant activity. However, further study is necessary uncovering the exact molecular mechanism of hepatoprotective activity.

Liver is one of the largest organs in human body and the chief site for intense metabolism and excretion. So it has a surprising role in the maintenance, performance and regulating homeostasis of the body. It is involved with almost all the biochemical pathways to growth, fight against disease, nutrient supply, energy provision and reproduction [1]. Thus, to maintain a healthy liver is a crucial factor for overall health and well being. Liver diseases are mainly caused by toxic chemicals, excess consumption of alcohol infections and autoimmune disorders. Most of the hepatotoxic chemicals damage liver cell mainly by inducing lipid peroxidation and other oxidative damages [2, 3]. Adverse hepatic events caused by drug can be considered to be either predictable or unpredictable. They may associate with serious morbidity and mortality [4]. Despite considerable progress in the treatment of liver diseases by oral hepatoprotective agents search for newer drugs continues because the existing synthetic drugs have several limitations. Hence crude drugs or natural food diet which possesses antioxidant or free radical scavenging activity has become a central focus for research designed to prevent or ameliorate tissue injury and may have a significant role in maintaining health [5]. Lawsonia inermis (Lythraceae) commonly known as ‘Henna’ is a well-known plant used in the traditional medicine. Various parts of this plant have been used in traditional medicine. Therefore, this work was aimed to study the hepatoprotective effect of L. inermis leaves ethanolic extracts on carbon tetrachloride (CCl4)-induced hepatotoxicity in rats by evaluating various biochemical parameters such as serum bilirubin, serum glutamic pyruvic transaminase (SGPT), serum glutamic oxaloacetic transaminase (SGOT), serum alkaline phosphatase (SALP) etc. We also investigated antioxidant phytochemicals in order to correlate the hepatoprotective mechanism of L. inermis.

Fresh leaves of L. inermis (Local name: Henna) was collected from medicinal plant garden, Department of Pharmacy, University of Rajshahi, Rajshahi and various parts of the locality. The plants were taxonomically identified by Mr. A. F. M Ali Haider, Assistant Professor, Department of Botany, University of Rajshahi and the voucher specimen has been preserved there. After thorough washing the leaves were dried under mild sun and subsequently in oven at 50oC temperatures for complete dryness. The dried materials were ground in electric grinder into a coarse powder.

2.3. Extraction and Fractionation of Plant Materials

The dried and pulverized plant material was cold extracted by ethanol as described previously [6] and the ethanolic extract was successively partitioned with ethyl acetate (EA), petroleum ether (PE) and chloroform (CF) using modified Kupchan partitioning method [7]. The resultant fractions were then evaporated by roto-dryer at low temperature (40-50oC) to dryness. The fractions were preserved at -20oC until use. Dimethyl sulfoxide was used as a solvent for the preparation of dose of various fractions.

2.4. Chemical Analysis of the Various Fractions of Ethanol Extract of L. inermis

The total phenolic (TP) content of the various fractions (PE, CF, EA) of ethanolic extract of L. inermis were determined by Folin-Ciocalteu Reagent (FCR) according to the method of Kumar et al., [8] with slight modification. Briefly, the solution of each extract (0.5 ml, 1 mg/ml) was diluted to 10 ml with distilled water in a volumetric flask. FCR (1 ml) was added and mixed thoroughly, and then sodium carbonate solution (3 ml, 2%) was added. After 2h incubation at room temperature, absorbance was measured at 760 nm. The total phenolic content was determined by comparison with the standard calibration curve of gallic acid, and results are presented as mg of gallic acid equivalents (mg of GAE) per gram dry weight of extracts. All tests were conducted in triplicate.

The total flavonoid content of each fraction of the extract was estimated by Zhishen et al. [9].Briefly, 0.5 ml (1 mg/ml) of each sample was mixed with 2 ml of distilled water and subsequently with 0.15 ml of NaNO2 solution (15%). After incubation for 6 min, 0.15 ml of AlCl3 solution (10%) was added and allowed to stand for another 6 min. Then 2 ml of NaOH solution (4%) was added to the mixture and adjusted the final volume to 5 ml by distilled water. The mixture was then mixed thoroughly and allowed to stand for another 15 min. The absorbance of the final solution was determined at 510 nm. The total flavonoid content was determined by comparison with the standard calibration curve of gallic acid, and results are presented as mg of gallic acid equivalents (mg of GAE) per gram dry weight of extracts.

The plant extracts were tested for the scavenging effect on DPPH radical according to the method of Pan et al., [10]. Accordingly, 0.2 ml of extract solution in ethanol (95%) at different concentrations (1, 2, 4, 8, 16, 32 and 64 μg/ml, respectively) was added to 8 ml of 0.004% (w/v) stock solution of DPPH in ethanol (95%). The scavenging activity on the DPPH radical was determined by measuring the absorbance at 517 nm until the reaction reached the steady state, using a UV-visible spectrophotometer (Shimadzu, Tokyo, Japan). Ascorbic acid was used as a positive control. The DPPH radical scavenging activity (S %) was calculated using the following formula:

The total antioxidant activity of the ethanolic extract and its various fractions of L. inermis were assessed by phosphomolybdenum method as described previously [11]. Briefly, 0.5 ml sample solution of each fraction was mixed with 3 ml of phosphomolybdenum solution comprising: 0.6 M sulphuric acid, 28 mM sodium phosphate and 4 mM ammonium molybdate. The mixture was then incubated at 95°C for 90 min followed by cooling at room temperature. The absorbance of the solution was measured at 695 nm against blank. Ascorbic acid was used as a positive control.

Male Wister rats weighing about 110–120 g were purchased from the animal resource branch of International Centre for Diarrheal Diseases and Research (ICDDR), Bangladesh. The animals were kept under standard environmental conditions (temperature 23 ± 2°C, relative humidity 55 ± 10%, and 12-h light/dark cycle). The animals were fed with standard rat pellets (formulated by ICDDR, Bangladesh) and water ad libitum and acclimatized to laboratory conditions for 7 days before conducting experiments. The investigation was conducted on experimental animals in accordance with the international principles for laboratory animals’ use and care as found in the guidelines [12]. The study protocol was approved by the Ethical Review Committee, Faculty of Biological Science, University of Rajshahi.

The hepatoprotective activity was evaluated according to the method described by Mahmud et al., [13] with minor modification. Twenty- four rats were randomly selected and divided into six groups of four animals each. Group I served as normal control and received only the vehicle (1% Tween-80 in normal saline) at a dose of 1 mL/kg body weight daily. Group II served as the CCl4-treated control group/negative controls and received the vehicle (1 mL/kg/ day) and CCl4 diluted with olive oil. Group III animals were administered with the standard drug silymarin at a dose of 50 mg/ kg/ day. Groups IV, V and VI received the PE, EA and CH fractions of the ethanolic extract of L. inermis at a dose of 200 mg/kg/day, respectively. The vehicle or test drugs were administered orally for successive 7 days. To induce hepatotoxicity, carbon tetrachloride diluted with olive oil (1:1) was given intraperitoneally (i.p.) [14] at a dose of 1 mL/ kg body weight to all the rats except the rats in Group I on alternate days for a period of 7 days while olive oil (0.5 mL/kg i.p.) was injected into group I animals. After24 h of the last dose of CCl4, all the rats were sacrificed by cervical decapitation; blood samples were collected through retro-orbital plexus and allowed to clot for 30 min at room temperature. The clear serum was separated by centrifugation at 4000 rpm for 10 min and serum samples were stored at -40°C until use for the determination of biochemical parameters.

The functional state of the liver was determined by estimating the biochemical parameters such as Serum Glutamic Oxaloacetic Transaminase (SGOT), Serum Glutamic Pyruvic Transaminase (SGPT), Serum Alkaline Phosphatase (SALP), Serum bilirubin concentration etc. SGOT and SGPT were estimated by enzymatic UV kinetic methods based on the reference method of International Federation of Clinical Chemistry [15-17]. Alkaline phosphatase (ALP) was estimated by the method described by McComb and Bowers [18]. Serum total bilirubin is measured as an end point chemical reaction using diazotization to produce azobilirubin. Increases in absorbance generated by blue colored azobilirubin and measured at 546 nm is proportional to the concentration of total bilirubin in the sample [19].

The result are expressed as mean ± SEM using Graph pad prism (version 5) computer program (Graph pad software San Diego, CA, USA).We used a one-way analysis of variance (ANOVA), followed by Scheff’s post-hoc test or students paired or un paired t-test where appropriate. The statistical method applied in each analysis was described in each figure. Results were considered to be significant when p values were less than 0.05 (p≤0.05)

3.1. Chemical Analysis of Total Phenol and Flavonoid Contents of the Various Fractions of L. inermis

Table 1. Determination of total phenol and flavonoid contents of the various fractions of L. inermis.

The phenolic and flavonoid compounds are considered as potential antioxidants and free radical scavengers. Here, we investigated the contents of total phenol (TP) and total flavonoid (TF) compounds in the various fractions (EA, PE and CF) of ethanolic extracts of L. inermis. The results are shown in Table 1. The highest amount of TP and TF contents were found in CHF and EAF, respectively. 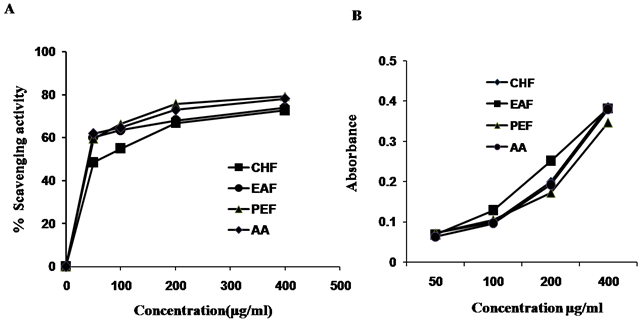 In the present study, as shown in the Fig. 2 (A,B,C,D) administration of various fractions of the ethanolic extracts of L. inermis significantly reduced the CCl4-induced elevated serum bilirubin, SGPT, SGOT, and SALP levels, respectively. In vitro phytochemical tests confirm the presence of significant amount of phenolic and flavonoid compounds (Table 1) with DPPH-free radical scavenging and total antioxidant activity (Fig. 1 A,B) in the ethanolic extracts of various fractions (EAF, PEF, CHF) of L. inermis. Among the various phytoconstituents, flavonoids and phenolic compounds have beneficial effects in the inflammatory condition. Flavonoids are particularly reported for significant antioxidant, vasculoprotector, antihepatotoxic, antiallergic, anti-inflammatory and anti tumor activity [25]. This protective effect of plant extracts could be the result of direct free radical scavenger properties. These plant extracts could also react with membrane phospholipid bilayers to break the chain reaction initiated by ROS. However, further study necessitates uncovering the detailed molecular mechanism. 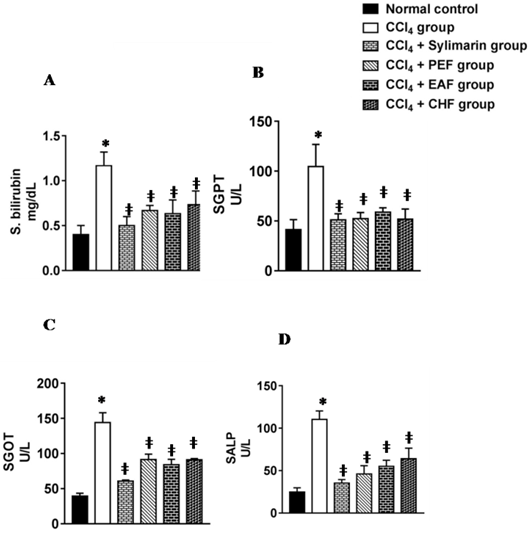 This study demonstrated that ethanolic extracts of various fractions (EAF, PEF, and CHF) of L. inermis leaves can protect against CCl4-induced acute hepatotoxicity. Possible mechanism of hepatoprotective activity of L. inermis may be due to its free radical scavenging and antioxidant activity as the result of the presence of flavonoids and phenolic compounds in the extracts. This study will help researchers to search for a new lead compound or blend it to a formulation which could be an effective treatment for various liver diseases. However, further study is necessary to clarify the exact molecular mechanism of hepatoprotective activity.

This work was supported in part by the Ministry of Science and Technology, People’s Republic of Bangladesh.