Abstract: Haimen goat is an exclusive and relatively rare indigenous Chinese goat breed that can produce high quality Brush Hair specialized in making valuable writing brush. To enlarge quickly the population size of Haimen goat, certain genetic markers that can improve litter size are needed in the breeding process. To search for suitable genetic markers related to litter size, the polymorphisms at the PRLR gene loci were investigated by PCR and single-strand conformation polymorphisms (SSCP) in Haimen goat, and their associations with litter size were analyzed by genetic tools. Results showed that two alleles are found on PRLR gene Intron 1, with gene frequencies was 0.59 and 0.41, respectively; the heterozygosity (He), effective allele number (Ne) and polymorphic information content (PIC) in Haimen Goat based on Intron 1 was 0.4838, 1.9372 and 0.3668, respectively; Two alleles were found on PRLR gene Intron 2, and gene frequencies was 0.79 and 0.21, respectively. He, Ne and PIC in Haimen Goat on Intron 2 was 0.3318, 1.4966 and 0.2768, respectively. The genetic variation indicated that the Haimen goat population was moderately polymorphic. The least square analysis and multicomparison of PRLR gene loci and litter size demonstrated that the SNP (A35G) on Intron 2 of the PRLR gene affected extremely significantly on litter size, with CC as the advantageous genotype for the trait of litter size; while the SNP (T95C) on Intron 1 had no significantly effect on litter size in Haimen goat. The results would provide some evidence for SNP (A35G) on Intron 2 of the PRLR gene as a candidate marker for the trait of litter size in goat.

Haimen goat, a Chinese indigenous goat breed of National Livestock Genetic Resource Conservation List in the Yangtze River Delta region, China, is the unique breed across the world that can produce meat, fur, and specifically high quality Brush Hair specialized in making valuable writing brush. Goat Brush Hair is usually graded into three levels, primary (Type I), moderate (Type II) and high quality (Type Ⅲ), based on the fiber diameter, length, color, luster and fine tip. For its precious properties, Haimen goat has been inspected for developing genetic lines with high reproductivity. Unfortunately, litter size has a poor heritability of about 0.1, which makes traditional breeding approaches unsuccessful in improving the reproductivity. Marker Assisted Selection (MAS), as an advanced molecular genetic tool, could improve dramatically the effect of selecting on the traits with low heritability. For the trait of litter size, prolactin receptor (PRLR）gene could be used as a candidate gene of MAS. PRLR is the receptor of prolactin, or lactogenic hormone, which is produced in the anterior pituitary. Isoforms of the PRL receptor are derived by differential splicing of the RNA transcribed from a single gene [1] or by posttranslational modifications. People are searching for the advantageous alleles and genotypes that can improve reproductivity from the mutations in the PRLR gene, and regard them as genetic markers for improving litter size. Achievements of this kind have been reached in pig [2-4], and goat [5-6], which gives a hint that the PRLR gene and MAS could possibly be useful for improving litter sizes in Haimen goat population. In this study, the polymorphism of the PRLR gene was investigated through the method of PCR-SSCP, and its relation with litter size was analyzed, hoping to find the basis of multiple litter in Haimen goat and construct the line of high reproductivity.

A total of 213 female goats were sampled with reproduction records and with no close kinship, which comprises: 171 goats from Haimen Goat Breeder Farm, 25 goats from Dongzhaogang Town and 17 goats from Liuhao Town. Ear tissue samples were collected from the 213 goats and stored at -20°C.

DNA samples were extracted from ear samples with phenol/chloroform protocol as described by Mullenbach et al. [7].

Based upon the sheep PRLR gene (GenBank accession No.: AF042358 ) and referring to literature [8], two pairs of PCR primers have been designed by Primer Premier 5.0 software , and synthesized by Sangon Company, Shanghai, China, to amplify DNA sequences of the intron 1 and 2 of PRLR gene: PRLR intron 1 (Forward: 5’-CATCTGCTGGAGGTAAGTGC, Reverse: 5’-TTCATTGCCCTCTGACGCTT); PRLR intron 2 (Forward: 5’- TGTCAGTAAGCGTCAGAGGGC, Reverse: 5’- GGCTGGTGGAAGGTCACTCTT). PCR amplifications were performed in 20 µl reaction mixture containing 50 ng DNA template, 10 pM of each primer, 0.20 mM dNTP, 2.5 mM MgCl2 and 0.5 U Taq DNA polymerase (TaKaRa, Dalian, China). PCR amplification conditions were used as follows: predenaturation at 94°C for 5 min, followed by 30 cycles of denaturation at 94°C for 60 s, annealing at 65°C for 60 s and extension at 72°C for 60 s, and a final extension at 72°C for 10 min. The PCR products were detected on a 1.5% agarose gel.

PCR products were then analyzed by SSCP. Aliquots of 2 µl of above PCR products were mixed with 8µl of the denaturing solution (95% formamide, 25 mM EDTA, 0.025% xylene-cyanole and 0.025% bromophenol blue), incubated at 98°C for 10 min and then chilled in ice. Denatured DNA was loaded in 10% PAGE gel. The gel was run at constant voltage of 140 V for a period of time depending on the concentration of the gel. The gel was stained with 0.1% silver nitrate and visualized with 2% NaOH solution (containing 0.1% formaldehyde) according to literature [9]. To confirm the observed results based on PCR–SSCP technique, the PCR products from the mix DNA template with different band type were sequenced in both directions. Chrome and DNAStar software was used to analyze the sequences.

The association between SNP marker genotypes of PRLR gene and records of litter size were analyzed by the method of GLM using the software SAS (version 8.0) according to the following statistical linear model:

b. Nucleotide sequence of different genotypes. Upper: AA, Down: AB. 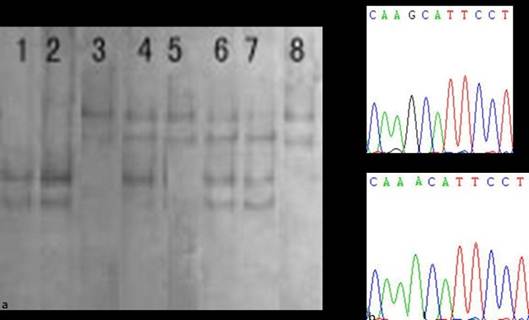 b. Nucleotide sequence of different genotypes. Upper: CC, Down: DD.

Table 1. Population genetics based on the PRLR gene loci.

3.3. Association of Polymorphisms at the PRLR Gene Loci with Litter Size

The genetic polymorphism of Haimen goat population, in this study, was moderately high based on the PRLR gene loci, which would be relatively lower than other goat or sheep population. Moreover, the unbalanced Hardy–Weinberg equilibrium also revealed that Haimen goat population size was small, and inbreeding would be popular within the population. The genetic status of Haimen goat population made it necessary to use more breeder male goats in breeding, which could improve the vigor of population. For the potential high inbreeding level, the trait of litter size in Haimen goat could be improved when the inbreeding level fell, though it had so far a good litter size and with a high rate of genotype CC. The low frequency of allele D and no genotype BB also revealed the possible artificial interference in the breeding of this goat breed.

4.2. Effect of Polymorphisms at the PRLR Gene Loci on the Trait of Litter Size

The PRLR gene plays an essential role in reproduction traits, including litter size and maternal behavior [11], with significant effects of some SNPs on certain traits. The aim of the study was to detect PRLR mutations in exon 10, using a polymerase chain reaction-single stranded conformation polymorphism method, and to determine the association between mutations in this region with maternal behavior traits. The polymorphic site at the intron 1 of the PRLR gene exerted no significant effect on the trait of litter size, while the SNP (A35G) at the intron 2 associated extremely significantly with the trait of litter size, which verified the possible function of mutations at the intron region. Though the intron sequence generally would not encode any proteins, the intron possibly participates in the differential splicing of the RNA transcribed from a single gene to form isoforms of the PRL receptor or the posttranslational modifications [1]. The SNP (A35G) at the intron 2 of the PRLR gene, though it might be linked with other litter size related gene loci, could be a possible resource to explore the mechanism of differential splicing of RNA. The allele C (base G) at SNP (A35G) had a positive effect on litter size in Haimen goat, and vice versa. The result was identical with other researches on other goat breeds [5-6]. Based on these researches on the effectiveness of polymorphisms at the PRLR gene loci, the SNP (A35G) could be regarded as a good candidate genetic marker, though its mechanism has not yet been fully tangled till now. For the gene frequency of litter size-advantageous allele was high in Haimen goat population, other genetic markers would be needed for further improvement of the trait of litter size. The mechanism of litter size-advantageous allele was still not clear and needed further investigation.

We declare that we have no financial and personal relationships with other people or organizations that can inappropriately influence our work, and there is no professional or other personal interest of any nature or kind in any product, service and/or company presented in our manuscript.

This work was supported by funding from the Priority Academic Program Development of Jiangsu Higher Education Institutions (PAPD 2011-137), the National Natural Science Foundation of China (31572355), and Yangzhou Science and Technology project (2015).