Abstract: Beta-hydroxy-beta-methylbutyrate (HMB), a leucine metabolite, has been suggested to inhibit inflammation. However, its mechanism is not fully understood. Here we show that HMB repressed LPS-induced interleukin-6 (IL-6) expression by inhibiting the NF-kB and AP-1 pathways. When protein phosphatase-1a (PP1a) was knocked down, the effects of HMB were partly abrogated. We conclude that HMB might repress inflammation by modulating PP1a and its downstream NF-kB and AP-1 pathways.

HMB is a metabolite of leucine, and is reported to possess some beneficial effects in humans. For example, it increased muscle size and strength when administered to healthy people, and attenuated muscle loss in the elderly and clinical patients (with AIDS, cancers etc.) (5). It increased the phosphorylation of mTOR, improved protein anabolism in muscles of an in vivo model of cancer cachexia (6), and attenuated dexamethasone-induced protein degradation (7).

Lipopolysaccharide (LPS) is commonly used as a stimulant of inflammation. It binds to Toll-like receptor 4 (TLR4) (11), increases expression of inflammatory cytokines by activating the NF-kB and activator protein 1 (AP-1) pathways, and initiates immune responses (12). NF-kB is localized in the cytoplasm, bound to its inhibitory subunit IkBa (13). LPS phosphorylates and degrades IkBa, then NF-kB moves into the nucleus and binds to the kB binding sites in the promoter and enhancer regions of various genes. The AP-1 pathway is regulated by MAPKs - c-Jun N-terminal kinase 1/2 (JNK1/2) and p38. AP-1 consists of c-Jun and c-Fos. c-Jun is phosphorylated and activated mainly by JNK1/2 (14). The transactivation domain of c-Fos is phosphorylated and activated by p38 (15). MAPKs are activated by their upstream mitogen-activated protein kinase kinases (MKKs); JNK1/2 by MKK4, and p38 by MKK3/6 (16, 17). By blocking these pathways, inflammatory cytokines, including IL-6, TNFa and IL-1b were inhibited (18-20).

In the present study, we stimulated RAW264.7 cells, a murine macrophage cell line, with LPS, and examined effects of HMB on inflammation. We investigated how HMB affected the NF-kB pathway, the AP-1 pathway and LPS-induced cytokine expressions.

Cell Culture. RAW264.7 cells were cultured at 37ºC in a humidified atmosphere (5% CO2/95% air) in DMEM supplemented with 10% FBS, 100U/ml penicillin, and 100μg/ml streptomycin. When RAW264.7 cells reached confluence, they were subjected to experiments.

RNA analysis. RNA was extracted from treated cells using an RNeasy Mini Kit (Qiagen, CA, USA) according to the manufacturer’s protocol. Approximately 1μg of total RNA was treated with DNase I (Fisher Scientific, PA, USA). cDNA synthesis from RNA was performed using an Omniscript RT Kit (Qiagen, CA, USA) and Oligo (dT) primers (Invitrogen, CA, USA). Quantitative real-time PCR was performed using the 7300 Real-Time PCR System (Applied Biosystems, CA, USA). Reactions were performed in a 20μl mixture containing cDNA, specific primers for each gene and the SYBR Green Mastermix (Applied Biosystems, CA, USA). Specific PCR products were detected by measuring the fluorescence of SYBR Green, a double-stranded DNA-binding dye. After the real-time PCR reaction, the dissociation (melting) curve was generated to check the specificity of the PCR reaction. The relative mRNA expression level was calculated from the threshold cycle value of each PCR product and normalized to that of 36B4 by using the comparative threshold cycle method. All real-time PCR experiments were performed in triplicates. Primer sequences were as follows.

Luciferase assay and siRNA transfection. RAW264.7 cells were transfected with Lipofectamine LTX (Invitrogen, CA, USA) according to the manufacturer’s protocol. AP-1-Luc plasmid (Stratagene, CA, USA) was transfected, and at the same time, a constant amount of pRL-Sv40-Luc plasmid (Promega, WC, USA) was transfected as control for transfection efficiency. RAW264.7 cells were pretreated with HMB (5mM) for 12h, and treated with LPS (1ng/ml) for an additional 12h. The cells were harvested with passive lysis buffer, then luciferase activity was measured with a DLReady Luminometer (Berthold Technologies, Germany). Luciferase activity was normalized by dividing AP-1-Luc activity by pRL-Sv40-Luc activity. These assays were conducted in triplicate.

Western blotting. After subjected to treatments, RAW264.7 cells were washed with ice-cold PBS and then lysed in RIPA buffer with a protease inhibitor cocktail, cOmplete Mini (Roche Applied Science, Germany) and a phosphatase inhibitor cocktail, PhosSTOP (Roche Applied Science, Germany), and subjected to SDS-PAGE, and then transferred to PVDF membranes. The membranes were blocked with TBS/Tween buffer containing 5% Phosphoblocker (Cell Biolabs, CA, USA) or non-fat milk, washed, and immunoblotted with antibodies. Primary antibodies against P-IkBa, IkBa, P-JNK1/2. total JNK1/2, P-p38, total p38, P-MKK4, P-MKK3/6 were from Cell Signaling (MA, USA), the antibody against PP1a was from Santa Cruz (CA, USA), and the antibody against b-actin was from Sigma Aldrich Japan. Anti-rabbit IgG and anti-mouse IgG (GE Healthcare, UK) were used as the second antibody. After immunoblotting, the proteins were visualized by means of chemiluminiscence using the ECL detection system (Amersham Pharmacia Biotech, France). All western blotting experiments were performed at least three times.

First, we examined the expression of LPS-induced inflammatory cytokines and the effects of HMB on them in RAW264.7 cells. LPS treatment increased IL-6 expression, and it was significantly downregulated by HMB (Fig. 1A). HMB also inhibited the LPS-induced TNFa, IL-1b and iNOS expressions (data not shown).

We investigated whether HMB downregulated IL-6 through the NF-kB pathway. After LPS treatment, IkBa was phosphorylated and degraded. HMB inhibited the LPS-induced surge of P-IkBa/IkBa ratio by reducing P-IkBa and increasing IkBa (Fig. 1B). Therefore, HMB was suggested to prevent NF-kB translocation into the nucleus and reduce cytokine expressions. 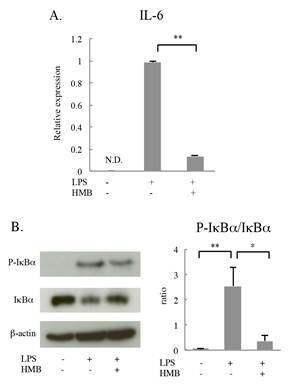 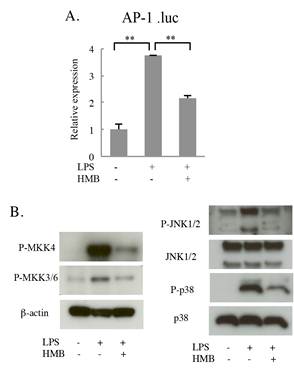 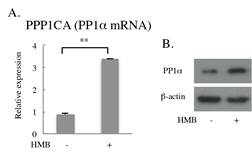 Figure 4. Effects of HMB on the LPS-induced phosphorylation of MAPKs (A), and IL-6 expression (B). PP1a protein was partially knocked down by siRNA (C).

Because leucine increases the PP1a expression, we examined whether HMB also increased the expression of the gene. Treatment of RAW264.7 cells with HMB for 3h increased the expression of PPP1CA, which encodes PP1a (Fig. 3A), and HMB treatment for 6h increased PP1a protein (Fig. 3B). We hypothesized that PP1a was involved in the effects of HMB. Therefore, we transfected PP1a siRNA into RAW264.7 cells with Lipofectamine LTX, and investigated the effects of HMB on MAPK phophorylation. PP1a was partially knocked down (Fig. 4C). HMB inhibited the LPS-induced phosphorylation of p38 and JNK1/2, but PP1a knockdown abrogated the effects of HMB (Fig. 4A). PP1a also partially but significantly abrogated the inhibitory effect of HMB on LPS-induced IL-6 expression (Fig. 4B).

Inflammatory cytokines are implicated in various diseases. For example, release of IL-1, TNFa and IL-6 from rheumatoid synovium might induce local inflammation in rheumatoid arthritis (21). A theory called inflamm-aging (inflammation+aging) proposes that, as humans age, inflammatory cytokines are one of the causes of various diseases such as atherosclerosis, dementia, type 2 diabetes and osteoporosis (22, 23). Repressing inflammation could counteract symptoms of the diseases.

It has been suggested that HMB has various beneficial effects, such as stimulating protein synthesis by mTOR activation (6) and repressing inflammation, but the mechanisms are not fully understood. Leucine enters the cell through SLC7A5 amino acid transporter and activates mTOR (24). HMB is a leucine metabolite and activates mTOR (25), so HMB might also pass through the same transporter.

In our data, HMB downregulated LPS-induced expression of IL-6 (Fig. 1A) and other cytokines (data not shown). These data suggest anti-inflammatory effects of HMB. HMB inhibited the degradation of IkBa (Fig. 2B), suggesting that HMB inhibited the translocation of NF-kB into the nucleus and had transrepressive function. When administered to tumor-bearing rats, HMB increased the expression of IkBa and reduced the expression of p65 in tumor cells (26). Taken together, our data support an inhibitory role of HMB in the NF-kB pathway. HMB also repressed AP-1 luciferase activity (Fig. 2A, B). In a previous study, LPS-induced p38 phosphorylation was inhibited by HMB in C2C12 myotubes (27). In our data, JNK1/2 was also inhibited. HMB increased PP1a expression (Fig. 3A, B), as leucine did in vivo (4). PP1a knockdown abrogated the effects of HMB on JNK1/2 and p38 phosphorylation (Fig. 4A), suggesting that PP1a is essential in these effects. PP1a knockdown also abrogated the inhibitory effect of HMB on LPS-induced IL-6 expression, but only partially (Fig. 4B). The catalytic subunit of PP1a binds to PKR and inactivates it (28). PKR is essential in LPS-induced IL-6 expression, and efficiently phosphorylates its downstream MKK3/6 and MKK4 (29). Therefore, out data suggest that PP1a might be a target of HMB. On the other hand, PP1a knockdown did not affect the effects of HMB on LPS-induced IkBa degradation (data not shown), so HMB might affect the NF-kB pathway by other molecular mechanisms.

In summary, our data suggest that HMB has anti-inflammatory effects and that the effects are, in some part, due to the increased PP1a expression and the reduced NF-kB and AP-1 activity.