Abstract: PGC-1α was initially identified as a PPARγ-interacting protein from the brown adipose tissue and was subsequently found to associate with many nuclear receptors and transcription factors. Among many coactivators of nuclear receptors, PGC-1α is unique because of its induced expression by stimuli, such as cold stress in the brown adipose tissue, fasting in the liver, and exercise in the skeletal muscle. In this short review, we describe the molecular features and skeletal muscle metabolism function of PGC-1α.

These abovementioned coactivators, such as CBP/p300 and SRC1, are ubiquitously expressed in tissues and cells. Their expression levels appear not to change during the differentiation of cells or in response to changes in external and internal environments. Puigserver et al. described a unique coactivator termed PPARγ coactivator 1 (PGC-1α), which distinguishes itself from other coactivators by the means of its tissue-specific and regulated expression; PGC-1α is a cold-inducible nuclear receptor coactivator [3]. Using PPARγ as a bait, they cloned a coactivator by 2-hybrid screening and named it PGC1 (later, renamed to PGC-1α). PGC-1α expression in mice is markedly induced in the brown adipose tissue by cold exposure, considered to be an adaptive response to cold stress for producing heat [3]. PGC-1α has been shown to regulate mitochondrial biogenesis and adaptive thermogenesis in the brown adipose tissue, mainly through the coactivation of PPARs and nuclear respiratory factor 1 (NRF1), a transcription factor that regulates the expression of mitochondrial genes [4]. In transgenic mice, PGC-1α increases mitochondrial biogenesis and beta-oxidation in the heart [5].

PGC-1ß has been cloned using a computer-based homology search by independent groups, including us [6,7]. We searched for potential PGC1-related molecules among expressed sequence tags and found that cDNA shows significant homology to PGC-1α (Fig. 1). We used nuclear receptors whose DNA-binding domains were replaced by the GAL4 DNA-binding domain, which allows the comparison of transcriptional activation profiles of various molecules with the same reporter such as UAS-Luc. PGC-1α was able to activate transcription by the means of multiple nuclear receptors. On the other hand, PGC-1ß preferentially activated estrogen-related receptor (ERR), which is an orphan receptor, in the absence of a ligand. The transgenic overexpression of PGC-1ß in several tissues, including skeletal muscle, exhibited an increased expression of the medium-chain acyl CoA dehydrogenase, a known ERR target and a pivotal enzyme of mitochondrial beta-oxidation in the skeletal muscle. As a result, the mice are hyperphagic and of elevated energy expenditure and are therefore resistant to obesity induced by a high-fat diet or genetic abnormality [7].

There is a putative RNA binding domain in PGC-1α protein, which is conserved in PGC-1ß (Fig. 1), and may have certain cellular functions. Namely, at the C-terminal end, PGC-1α and PGC-1ß contain an RNA recognition motif (RRM) with homology to corresponding domains found in hnRNP proteins and SR factors, which confer both RNA and single-stranded DNA binding activity. The N-terminal to the RRM of PGC-1α are two regions rich in Ser–Arg pairs, which are the characteristics of SR proteins and related factors. SR proteins are a class of splicing factors that play a role in the regulation of alternative splicing [8]. Monsolve et al. showed by the deletion of the SR and RRM of PGC-1α that these domains are important for RNA splicing and RNA translation initiation. Namely, mutation in the SR domain and the RRM of PGC-1α interfere with the ability of PGC-1α to induce the mRNAs of target genes. These mutations disrupted the ability of PGC-1α to colocalize and associate with RNA processing factors [9]. Meanwhile, Kurokawa’s group showed that a RNA binding protein TLS (translated in liposarcoma) is important for the nuclear receptor function [10]. Namely, TLS interacts with CBP/p300, which is induced by non-coding RNA that binds to TLS, and results in the suppression of CBP/p300 histone acetyltransferase (HAT) and transcriptional activities. Thus, TLS regulates the gene expression in a RNA-binding dependent manner [10]. Meanwhile, SRA (steroid receptor RNA activator) is known to be a non-coding RNA, which is not likely translated into protein, and acts as a coactivator of nuclear receptors [11]. Thus, non-coding RNA and RNA binding proteins are likely to be important in the gene regulation by nuclear receptors. However, the RNA that binds to the RRM of PGC-1α remains unknown and is required to be studied in future research.

PGC-1α was originally found as a cold-inducible coactivator in the brown adipose tissue. Subsequently, it has been reported that the expression of PGC-1α is induced by exercise in the skeletal muscle as well as by fasting in the liver. It has been established that transgenic mice overexpress PGC-1α in the skeletal muscle [12,13]. In PGC-1α-trasngenic (Tg) mice, the skeletal muscle has increased mitochondria, increased gene expression of fatty acid oxidation, and angiogenesis and showed redder muscle fiber and is likely to be adapted to endurance training. Indeed, PGC-1α-Tg mice displayed increased running capacity in a treadmill experiment [14]. We recently performed a microarray and metabolome analysis of the skeletal muscle of PGC-1α-Tg mice. A microarray followed by bioinformatics analysis showed that PGC-1α overexpression caused an increase in the pathway of branched-chain amino acid (BCAA) catabolism as well as other previously known energy metabolism pathways such as fatty acid oxidation and the TCA cycle [15]. BCAA is an important energy source during exercise and has become common in commercially grown food consumed as supplemental foods. PGC-1α-induced BCAA metabolism may play a role in enhanced exercise capacity [15]. Meanwhile, metabolome analysis showed that metabolites involved in several different pathways, such as the purine-nucleotide and aspartate-malate pathways, which are known to be activated during exercise, are changed in PGC-1α-Tg mice (Fig. 2). Taken together, PGC-1α appears to play important roles in exercise mediated metabolic change in the skeletal muscle [16].

As described, PGC-1α has a broad role in the gene regulation of cellular process, including skeletal muscle metabolism, which we briefly introduced in this short review. Many studies that have focused on the physiological roles and molecular mechanisms of this molecule, including non-coding RNA interaction, are being clarified, after which the knowledge would be applied for the improvement of exercise capability as well as strategies for the prevention of metabolic diseases. 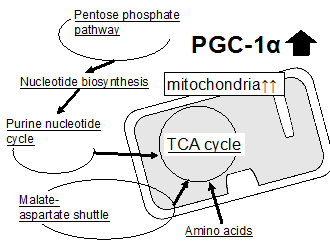 Figure 2. Schematic metabolic pathway changes in PGC-1α-Tg mice. Levels of many metabolic products are changed in the skeletal muscle of PGC-1α-Tg mice. Many of these changes are associated with mitochondrial metabolism, in particular the TCA cycle. Increased mitochondrial content because of PGC-1α-overexpression appears to activate the TCA cycle; therefore, there must be more substrates available for the TCA cycle. For instance, the activated pentose phosphate pathway stimulates nucleotide synthesis, which is followed by the activation of the purine nucleotide cycle, supplying fumarate for the TCA cycle. Meanwhile, the activation of the malate-aspartate shuttle supplies other substrates. In addition, amino acids are likely to be used as substrates. The increased coordinated regulation of the TCA cycle and amino acid metabolism, including BCAA, suggests that PGC-1α plays important roles in energy metabolism. Moreover, the activation of the purine nucleotide pathway and malate–aspartate shuttle, which are known to be active during exercise, further suggests that PGC-1α regulates metabolism during exercise.

Y. Hatazawa and R. Yoshimura are Research Fellows of Japan Society for the Promotion of Science. Y. Kamei is employed by Kyoto Prefectural University, and S. Miura is employed by University of Shizuoka. Y. Kamei and S. Miura are supported by the Council for Science, Technology and Innovation (CSTI), Cross-ministerial Strategic Innovation Promotion Program (SIP), and "Technologies for creating next-generation agriculture, forestry and fisheries" (funding agency: Bio-oriented Technology Research Advancement Institution, NARO). Y. Kamei and S. Miura are also supported by grants-in-aid for scientific research (KAKENHI) from the Japanese Ministry of Education, Culture, Sports, Science and Technology (MEXT, Tokyo). The funders had no role in study design, data collection and analysis, decision to publish, or preparation of the manuscript.