Abstract: Introduction: Despite the availability of a safe and cost effective vaccine, measles remain one of the leading causes of death among young children. The majority (more than 95%) of measles deaths occur in low income countries like Ethiopia. Measles outbreaks are consistently reported from Amhara region of Ethiopia. Therefore analysis of surveillance data was performed to describe measles epidemiology within the region, to characterize the population affected and develop guidance to improve measles control activities. Methods: Measles surveillance data reported from Woreda to Amhara regional health bureau from 2008-2010 were obtained, reviewed and analyzed using Microsoft excel. The World Health Organization(WHO) clinical case definition for suspected measles case is a person with fever, and maculopapular rash (i.e. non vesicular) and cough, coryza or conjunctivitis. Result: A total of 2520 suspected cases of measles were reported to Amhara regional Public Health Emergency Management (PHEM). Out of this 353 (18%) were positive for IgM antibodies to measles , 1037 were epidemiologically linked and clinical cases. The median age of cases is  7 years with a range of two months to seventy nine years. Higher incidence was observed in children less than five years (12, 5.3 & 3.5/100,000 < five population) in the years 2010,2009 &2008 respectively. From the reported 1319 measles cases 1039(78.7%) were unvaccinated. And out of the unvaccinated children less than five years were (%). Conclusion: Majority of cases are children less than five years of age. A large proportion of cases occur among unvaccinated individuals. Improving vaccination coverage, maintaining information on vaccination history and strengthening measles surveillance is mandatory. Effectiveness of cold chain needs further assessment if vaccine failure is a factor for measles outbreaks.

Measles is a highly infectious viral disease caused by a Morbillivirus and for which humans are the only reservoirs. In a non-immune person exposed to measles virus, after an incubation period of about 10 to 12 days (range 7-18 days), prodromal symptoms of fever, malaise, cough, coryza (runny nose), and conjunctivitis appear. Within 2 - 4 days of the prodromal symptoms, maculo-papular rash appears behind the ears and on the face. The rash spreads to the trunk and extremities and typically lasts 3-7 days [1]. Most persons recover from measles without complications. Some complications are associated with measles due to transient suppression of cellular immunity, which is a characteristic feature of the disease. Frequent complications in children less than five years of age include otitis media (5% - 15%) and pneumonia (5% - 10%) [2]. Transmission is primarily person-to-person via aerosolized droplets or by direct contact with the nasal and throat secretions of infected persons. Individuals with measles are infectious 4 days before through 4 days after rash onset [1].

Despite the existence of a safe, effective, and inexpensive vaccine, measles is still not being controlled in many parts of the world. However the use of measles vaccine over the last 30 years has reduced global measles morbidity and mortality by 74 and 85%, respectively, compared with the pre-vaccine era [3]. The World Health Organization (WHO) estimates that almost one million measles-related deaths occur each year, the majority (85%) in Africa and Asia [4, 5, 6].

Measles is widely known in Ethiopia and it has many names in various ethnic languages, e.g., Kufign, Ankelis or Shifto. In 1980 Ethiopia introduced measles vaccination as part of the Expanded Program on Immunization (EPI) [7]. A single dose of measles vaccine is recommended at 9 months of age [8,9]. Several developed and developing countries follow a strategy that differs in timing and in the number of doses delivered either through routine immunization or supplemental mass immunization campaigns [10]. In determining the age for vaccination, countries must balance the consequences of an older age (lack of protection in the early months of life) and a younger age (reduced effectiveness). In many countries, where morbidity and mortality due to measles are uncommon in infants, choose an older age for vaccination (e.g., age 12 or 15 months). In other countries, where a high number of deaths due to measles occur in children aged <9 months, a younger age for vaccination has been advocated [11, 12].

However, during supplemental immunization campaigns, a single dose of measles is given, irrespective of the immunization and disease history status, to all children in the target age group [13]. A study conducted in Ethiopia showed also that campaign vaccination elevated immunity in the target ages by between 30% and 50% according to age group, or an average of around 40% [14].

According to the National Public Health Emergency Management (PHEM) guideline, every suspected measles case should be detected, reported using the cases based form and undergo laboratory investigation (or the first five cases in the situation of outbreaks) and during an outbreak all cases must be entered on a line listing, investigated and reported to next higher level [7,15].

Amhara region has experienced a number of measles outbreaks and analysis of measles surveillance data is essential for the control and prevention of the disease.

The aim of the surveillance data analysis is to describe the distribution of measles and burden in the region and communicate the findings for further action.

Amhara region is located in north-western part of the Ethiopia in an area of 170000km [2]. The region is administratively divided in to eleven zones and this further divided in to166 woredas/districts. The total population is estimated to be 18.2 million, which accounts one-fourth of the country’s population. The rate of the natural increase is 1.8%.

After getting permission letter from the regional PHEM office for the analysis, data was accessed from the regional WHO coordinator office data base. Cross sectional retrospective descriptive data analysis was conducted on three years (2008_2010) regional measles surveillance data from February to March 2011. Data was analyzed using Microsoft excel. The study variables included were age, date of onset, laboratory result, specimen quality, vaccination status, zone and year.

The national Public Health Emergency Management and measles guideline was used for the case definitions and the final classification of cases by the laboratory as it was registered in the data base. [14]

Suspected case: Any person with fever and maculopapular (non-vesicular) generalized rash and cough, coryza or conjunctivitis (red eyes) OR any person in whom a clinician suspects measles.

Confirmed case: A suspected case with laboratory confirmation (positive IgM antibody) or epidemiologically linked to confirmed cases in an epidemic.

All suspected cases of measles are finally classified based on the laboratory result or for cases with no laboratory testing clinical criteria and linkage to the case confirmed by laboratory is used to classify cases as follows;

Laboratory confirmed: A suspected measles case that is investigated, including the collection of an adequate blood specimen (5ml), and has serological confirmation of recent measles virus infection (IgM positive).

Epidemiologically linked: A suspected measles case that has not had a blood specimen taken for serologic confirmation, but is linked to a laboratory confirmed case (definitive serologic evidence of recent measles virus infection). Linked is interpreted as being in the same geographic area (place) during the infectious period (time) of a laboratory-confirmed case (person), i.e., in the same district within 30 days.

Discarded: A suspected measles case that has been completely investigated, including the collection of adequate blood specimen (5ml), but lacks serologic evidence of recent measles virus infection (i.e., IgM negative).

Clinical / Compatible: A suspected measles case that has not had a blood specimen taken for serologic confirmation and cannot be epidemiologically linked to a laboratory confirmed case. 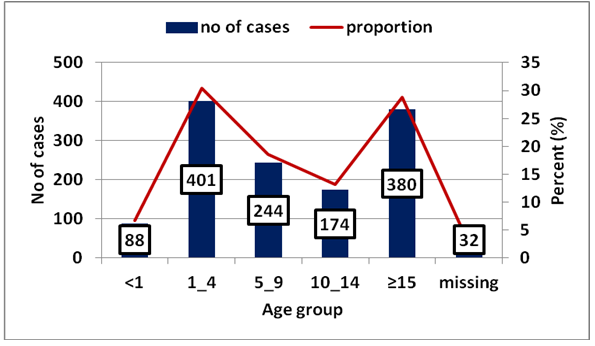 Though the vaccination coverage of all zones was less than 90% except North Wello (93%) in the year 2008 the coverage has shown an increment in each year. [17] (Table 2

In each month on average 37 confirmed cases were reported to the regional PHEM. The number of measles cases start to increase on March and reach its peak on May then it decreases on June on 2009 and 2010 year. In the year 2008 the number of cases starts to increase in June and it reaches its peak on July. (Fig 3)

Through filtration of the data for the specific months that showed highest peak on the line graph; Aneded, Tenta, Dembia and Wogdei in the year 2010, Simada in the year 2009 and Jama, Merha bête and Mida woremo in the year 2008 reported an increased number of cases using line listing which indicates the occurrence of outbreak. Since  after confirmation of the outbreak cases are registered in line listing format and reported to the next level.

The number of measles cases has increased year to year and the region also experienced a number of outbreaks in the last three years. This could probably be due to low vaccine coverage and strong measles surveillance activities. From the total reported suspected cases 1190(47%) were negative, which indicates increased awareness for notifying the suspected measles cases and increased detection of non measles rashes. Among the total confirmed and clinical cases 280(21%) were vaccinated, 554(42%) not vaccinated and 480(36%) with unknown vaccination status. This may be due to low immunization coverage and failure in vaccine efficacy. And this may also contribute for the occurrence of the outbreak and for the increased number of cases.

Though the regional measles immunization coverage shows progress it is still much lower than the target (90%).

The incidence of measles cases also shows an increment especially in zones with low vaccination coverage like Bahir Dar. Even zones with vaccine coverage > 85% percent have reported higher incidence in children less than five years of age and this may indicate there might be poor cold chain management.

Cases were not evenly distributed by age and the most affected age group was observed from 1-4 years throughout the three years period (Figure 1). This could be the immaturity of immune system in this age group and it is also documented that in developing countries the most vulnerable children are between the ages of 9 months and 5 years [15].

Generally there was an increment in the incidence of measles cases. The regional vaccine coverage showed progress year to year. Around five zones were responsible for the highest peaks on the regional epi- curve of three years period. Majority of cases are children less than five years of age. A large proportion of cases occur among unvaccinated individuals. The highest incidence rate was observed in East Gojjam, North Gondar, West Gojjam and Bahir Dar zones. These also reported higher incidence in less than five years of age children.

Data is incomplete it lacks sex, outcome, address of cases.

• Measles surveillance activities should be strengthen at all levels