Diabetes is a common metabolic disorder characterized by hyperglycemia due to an absolute or relative insulin deficiency [22,1]. It affects essential biochemical pathways of the body including carbohydrate, protein, and lipid metabolisms. The World Health Organization (WHO), estimated that there were 171 million people in the world with diabetes in the year 2008 and this is projected to increase by over a 100% to 366 million by 2030 [1]. Diabetes is associated with reduced life expectancy, significant high mortality and diminished quality of life. In 2005 an estimated 1.1 million people died from diabetes and diabetic related complications [2]. Its prevalence is rising globally, including the rural Nigerian populations [3].

The challenges and thus, the solutions in the provision of healthcare that would improve outcome for diabetes in low and middle income countries are many and can be found at multiple levels. Patient-related factors are of extreme importance, these ranges from low levels of self-management practices, lack of adherence to lifestyle changes and medication and lack of faith in the conventional management procedures. Many African populations still regard alternative healing systems as the primary source of healthcare or alternatively, consult both traditional or folk healers that usually promote the concept that diabetes is curable and have been found to be also reluctant to refer clients to medical practitioners [4,5]. This, however, is undermined by two key factors; the high cost of drugs and recommended foods as well as the psychosocial burden imposed by the daily oral hypoglycaemic drugs and therapeutic routines. Moreover, spiritual causal theories of diabetes such as sorcery and witchcraft are still found in many African populations, particularly in rural communities [6].

However, little is known about the beneficial effect of Selenium (Se), a trace element with both antioxidant and anti-inflammatory properties that offers several health benefits to animals and humans [7,8,9].

Selenium is found in minute amounts in foods, with the richest sources being from meats, fish, whole grains, and dairy products. The selenium content of vegetables is dependent on the soil in which they are grown [7,9].

In recent years, selenium (Se) research has attracted tremendous interest because of its important role in antioxidant seleno-enzymes, such as glutathione peroxidase (GPx) and thioredoxinreductase, which protect against oxidative stress [8].The organic form of selenium provided by selenium-yeast has been shown to differ in bioavailability and metabolism compared with inorganic (e.g., selenate, selenite) forms of dietary selenium [10]. Furthermore, selenium-yeast has been used in a wide range of studies aimed at examining the importance of selenium status in the incidence and progression of a variety of infectious and degenerative diseases [11].

Thirty five (35) adult male Wistar rats weighing (180 – 200) grams were used for the study. The animals were housed in polypropylene cages under standard laboratory conditions and had free access to food and water ad-libitum. Animals were allowed to acclimatize to the laboratory environment over a period of 14 days before the commencement of the experiments. Animal care and use were conducted in accordance with the Guide for the Care and Use of Laboratory Animals, Institute for Laboratory Animal Research, National Institute of Health (NIH Publications No. 80-23; 1996)

After the induction of experimental diabetes in the Wistar rats, the animals were randomly divided into four treatment and one control groups of five rats each. All the animals were fasted for 16-18 hours before the commencement of treatment and the treatment lasted for 4 weeks as follows: Weeks 1, 2, 3 and 4, all treatments were administered via oral route.

Blood samples were collected from the rat’s tail weekly for the period of 4 weeks. Determination of blood glucose level was done by the glucose-oxidase principle [14], using the digital glucometer (Accu-Check Advantage, Roche Diagnostic, Germany), and results were recorded as mg/dl [15].

The data obtained were expressed as mean ± standard error of mean (SEM) and data were statistically analyzed using analysis of variance (ANOVA) followed by Tukey’spost hoc test. The values of p ≤ 0.05 was considered as significant.

Table 1. Shows the results of the changes in plasma glucose levels (mg/dl) during the treatments for 4weeks. 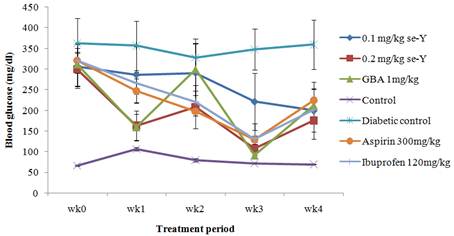 Similarly, the lowering effect of glibenclamide on blood plasma glucose level in the study, determined by comparing the values in the diabetic control group with the group that received 1mg/kg/day/4weeks of glibenclamide (i.e. Group V vs. Group III) showed that glibenclamide significantly lowered blood plasma glucose levels at WK1 and WK3 of the treatments. In addition, the comparison of the blood plasma glucose levels of Group VI that (received300mg/kg/day/4weeks of aspirin) and VII that (received 120mg/kg/day/4weeks of Ibuprofen)with that of diabetic control showed that the anti-inflammatory drugs, aspirin and ibuprofen also possess significant blood plasma glucose lowering effect only at WK3. Furthermore, between groups’ comparison showed that there were no significant differences in the hypoglycaemic effect of aspirin, ibuprofen, glibenclamide and selenium-yeast. These results put together suggest that 0.2 mg/kg and not 0.1 mg/kg of selenium-yeast possesses hypoglycaemic property that is comparable to the hypoglycaemic property of the oral-hypoglycaemic drug, glibenclamide and the anti-inflammatory drugs, aspirin and ibuprofen but with earlier onset time than the anti-inflammatory drugs. Generally, the hypoglycaemic effect of selenium-yeast observed in the study appears to be in disagreement with the results of related studies that suggested that Se could cause glucose disturbance and increase the risk for DM [16,17,23].

Glibenclamide is a well-known oral hypoglycaemic drug that belongs to the family of the sulfonylureas a first generation anti-diabetic drug; it elicits its hypoglycaemic effect mainly by acting on ATP-sensitive potassium channel in pancreatic beta-cells.

The pain killer effect of the anti-inflammatory drugs are best known for their effects on the two cyclooxygenase enzymes (COX1 and COX2), but in addition, anti-inflammatory drugs could specifically inhibit the protein I-kappa-β-kinase beta (IKK-beta). This kinase is used for its role in the cascade of signals that activate the nuclear factor kappa-b (NF-kappa-B) family of cellular genes which regulate inflammatory and immune responses. Now, it turns out that IKK-beta also works in another pathway to contribute to insulin resistance by interfering with insulin signalling. Therefore, inhibition of this protein by anti-inflammatory drugs may contribute to the hypoglycaemic property of this class of pain killer [13].

The effect of selenium-yeast on blood plasma glucose levels have been reported in several studies on both human and experimental animal, however the overall results are controversial. Conflicting results were reported on the prevalence of diabetes in correlation with serum selenium levels [18,19], Similarly, studies on the protective effect of long-term selenium supplementation reported that selenium does not seem to prevent diabetes or improve blood plasma glucose levels and that it may increase risk for the disease [16,17]. However, evidence from other studies suggests that selenium could enhance insulin sensitivity and improve blood plasma glucose levels by mediating insulin-like actions [20,21] and by acting via several other mechanisms, including detoxifying liver enzymes, exerting anti- inflammatory effect, and providing antioxidant defense to elicits its anti-diabetic effect, however, the mechanisms by which Se exerts these beneficial effects are still not yet fully understood [7,8,23]. Therefore, more studies should be conducted on selenium-yeast to determine the probable mechanisms via which Selenium is eliciting the hypoglycemic effect observed in the study.