Abstract: The Murashige and Skoog medium (MS media) is a chemically defined and widely used as a growth medium for plant tissue culture techniques. The present study was attempted to evaluate the impact of biofield energy treatment on the physical, thermal, and spectral properties of MS media. The study was performed in two groups; one was kept as control while another was subjected to Mr. Trivedi's biofield energy treatment and coded as treated group. Afterward, both the control and treated samples were analyzed using various analytical techniques. The X-ray diffraction (XRD) analysis showed 19.92% decrease in the crystallite size of treated sample with respect to the control. The thermogravimetric analysis (TGA) showed the increase in onset temperature of thermal degradation (Tonset) by 9.41% and 10.69% in first and second steps of thermal degradation, respectively after the biofield energy treatment as compared to the control. Likewise, Tmax (maximum thermal degradation temperature) was increased by 17.43% and 28.61% correspondingly in the first and second step of thermal degradation in the treated sample as compared to the control. The differential scanning calorimetry (DSC) analysis indicated the 143.51% increase in the latent heat of fusion of the treated sample with respect to the control sample. The Fourier transform infrared spectroscopy (FT-IR) spectrum of treated MS media showed the alteration in the frequency such as 3165→3130 cm-1 (aromatic C-H stretching); 2813→2775 cm-1 (aliphatic C-H stretching); 1145→1137 cm-1 (C-N stretching), 995→1001 cm-1 (S=O stretching), etc. in the treated sample with respect to the control. The UV spectra of control and treated MS media showed the similar absorbance maxima (λmax) i.e. at 201 and 198 nm, respectively. The XRD, TGA-DTG, DSC, and FT-IR results suggested that Mr. Trivedi's biofield energy treatment has the impact on physical, thermal, and spectral properties of the MS media. As a result, the treated MS media could be more stable than the control, and might be used as better media in the plant tissue culture technique.

The optimum growth and development of plant tissues are vary among the plants according to their nutritive requirements [1]. The tissues from different plant parts may also have different requirements for appropriate growth. Furthermore, the plant species are sensitive to growth regulators and high salts [2]. Therefore, the tissue culture medium was selected based on the species to be cultured. Development of culture medium was a consequence of several systematic experimentation and trials [2,3]. An ideal plant tissue culture media should contain the constituents such as micronutrients (<0.5 mM/L), macronutrients (>0.5 mM/L), amino acids, nitrogen supplements, vitamins, carbon source, undefined organic supplements, plant growth regulators and solidifying agents such as agar [4,5]. The Murashige and Skoog media (MS media) is a chemically defined and most suitable classic plant cell culture medium, consisting vitamins, carbohydrates, and inorganic salts [6]. Ammonium nitrate and potassium nitrate serves as the nitrogen sources, while sucrose was used as the source of carbohydrate. The MS medium was first invented by Toshio Murashige and Folke Skoog to support the tobacco callus and regeneration of shoots and plantlets from the explants [6,7]. Autoclaving or heat treatment is the standard method of culture media sterilization [8]. However, the extensive heat treatment of complex culture media may result in nutrient destruction via the direct thermal degradation or chemical reactions between the components [9]. Therefore, it is advantageous to find out an alternative approach that can enhance the thermal stability of culture media.

Recently, the energy therapies have been reported for several beneficial effects throughout the world. Biofield energy treatment is the part of energy therapy that has been reported to alter the numerous physicochemical and spectral properties of organic compounds [10] and organic products [11]. The National Institute of Health/National Center for Complementary and Alternative Medicine (NIH/NCCAM) considered the healing energy or the putative energy fields treatment under the subcategory of energy therapies [12]. The energy therapies such as magnet therapy, bio-electromagnetic therapy, healing touch, etc. comprise low-level of energy field interactions [13]. Numerous mechanism and explanations are proposed in support of the biofield energy therapies including the consciousness. It is described as healer's intent to heal, which may interact with the physical realm [14]. Similarly, physical resonance is another concept that includes subtle energies. According to this, the energy might exchange between the energy fields of patient and therapist [15]. Thus, the human can harness the energy from Universe and transmit it to the objects (living or non-living). The objects receive this energy and respond in a useful way. This process is called as biofield energy treatment. Mr. Trivedi is well known for his unique biofield energy treatment (The Trivedi Effect/sup>) that has been studied in the field of biotechnology [16], agricultural science [17], microbiology [18], etc.

The MS media was procured from HiMedia Laboratories, India. It contained several inorganic salts such as ammonium nitrate, EDTA, ferrous sulphate, magnesium sulphate, myo-inositol, potassium nitrate, potassium phosphate, sucrose, etc. (Table 1). The MS media was divided into two groups; one was kept as control while another was handed over to Mr. Trivedi to render the biofield energy treatment under standard laboratory conditions. Mr. Trivedi provided the biofield energy treatment to the treated group via his unique energy harnessing process without touching the sample. Subsequently, both the control and treated samples were analyzed with respect to physicochemical and spectroscopic properties using various analytical techniques such as XRD, TGA-DTG, DSC, FT-IR, and UV-vis spectroscopy.

The XRD analysis of control and treated samples of MS media was done on PW 1710 Phillips Holland X-ray diffractometer with copper anode and nickel filter. The wavelength of XRD system was set to 1.54056 The percent change in crystallite size (G) was calculated using following equation:

Here, GT and GC are the crystallite size of treated and control samples, respectively.

The TGA-DTG analysis of control and treated samples was carried out on Mettler Toledo simultaneous TGA/DTG STARe SW 8.10 thermal analyzer. The analytes were heated up to 400°C from room temperature at the heating rate of 5°C /min under air atmosphere. The onset temperature of thermal degradation (Tonset) and the temperature at which maximum weight loss occur (Tmax) were obtained from TGA-DTG thermograms.

The melting temperature and latent heat of fusion of control and treated MS media were determined using the Pyris-6 Perkin Elmer differential scanning calorimeter. The samples were heated up to 300°C at the heating rate of 10°C/min under air atmosphere with air flow rate of 5 mL/min.

The FT-IR spectroscopic analysis of control and treated samples of MS media was carried out on Shimadzu's Fourier transform infrared spectrometer (Japan) in the frequency region of 500-4000 cm-1. The samples for FT-IR analysis were prepared by mixing of MS media sample (1%) with KBr powder and then pressed to a disc or pellets.

The UV-vis spectra of control and treated MS media were recorded on Shimadzu's UV spectrometer (2400 PC). The instrument was equipped with quartz cell of 1 cm with a slit width of 2.0 nm. The samples were analyzed at the UV wavelength region of 200-400 nm. 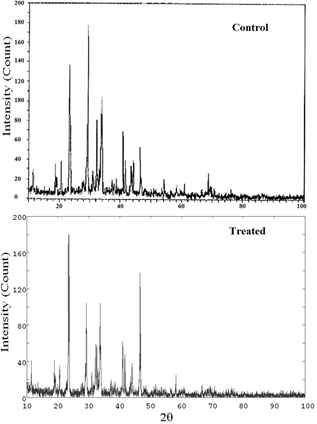 The XRD diffractograms of control and treated MS media are shown in Fig. 1. The XRD diffractograms showed the sharp and intense peaks in both the samples. This suggested the crystalline nature of control and treated MS media. The XRD diffractogram of control MS media showed the peaks at Bragg's angle (2θ) equal to 23.35 29.29 32.25 33.67 and 40.92 Similarly, the XRD diffractogram of treated MS media exhibited the XRD peaks at 2θ equal to 23.39 23.69 29.28 33.67 and 46.64 The result showed that positions of XRD peaks in biofield energy treated sample were slightly altered with respect to the control sample peaks. It is reported that due to the presence of internal strain within the molecules the positions and shape of X-ray diffraction peaks can alter [19]. Based on this, it is hypothesized that the biofield energy treatment possibly produced some internal strain within the treated sample. Furthermore, the average crystallite sizes of both the samples were determined using Scherrer equation [20]. 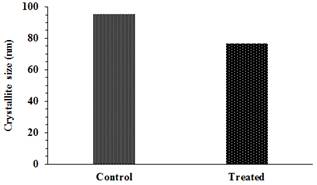 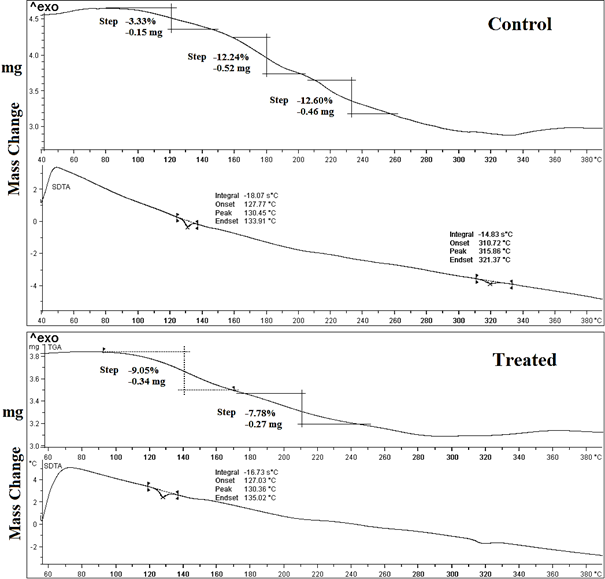 The DSC analysis was performed to determine the latent heat of fusion (ΔH) and the melting temperature of both the control and treated MS media. A considerable amount of interaction force present in the chemical bonds of any substance holds them tightly on their positions. The energy required to overcome the interaction force during the phase change (i.e. solid into liquid) is termed as the ΔH. The DSC thermograms (Fig. 4) of MS media showed the latent heat of fusion as 28.68 J/g in the control and 69.84 J/g in the treated sample (Table 2). This showed about 143.51% increase in the latent heat of fusion of treated sample as compared to the control sample. It might be due to increase in intermolecular force after the biofield energy treatment of MS media than the corresponding control. Consequently, the treated MS media molecules absorbed more heat (ΔH) to change the phase from solid to liquid as compared to the control. Previously, our group has reported the biofield energy treatment induced alteration in ΔH in organic products such as bile salt and proteose peptone [27]. Therefore, it is supposed that biofield treatment might increase the intermolecular interaction forces in treated MS media molecules, which may lead to increase its latent heat of fusion.

Table 2. Thermal analysis of control and treated samples of Murashige and Skoog media. 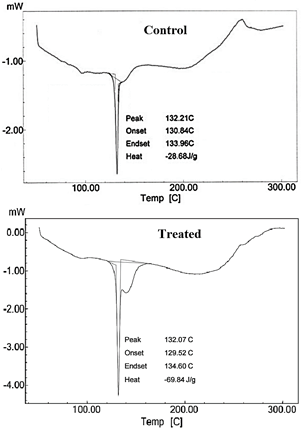 FT-IR spectra of the control and treated MS media are shown in Fig. 5. The contents like inorganic salt, plant growth regulators, and carbohydrates comprised in MS media may contain functional groups such as O-H, N-H, C-H, C=C, N=O, C-O, etc. Therefore, the FT-IR spectra of MS media may be expected with the vibrational frequencies associated with these groups. The vibration peak at 3546 cm-1 in control and 3543 cm-1 in treated sample were assigned to O-H stretching. The vibration peak at 3165 cm-1 in control sample was assigned to aromatic C-H stretching that was shifted to lower frequency region i.e. at 3130 cm-1 after the biofield energy treatment. The position of IR peak in the FT-IR spectrum depends on the force constant and the dipole moment of respective bond. The increase in dipole moment or force constant in the same atomic bond cause to increase in the frequency (upstream shift) and vice versa [28,29]. Based on this, it is hypothesized that the force constant or dipole moment of aromatic C-H might decrease; therefore, the IR peak of aromatic C-H was shifted to lower frequency region. 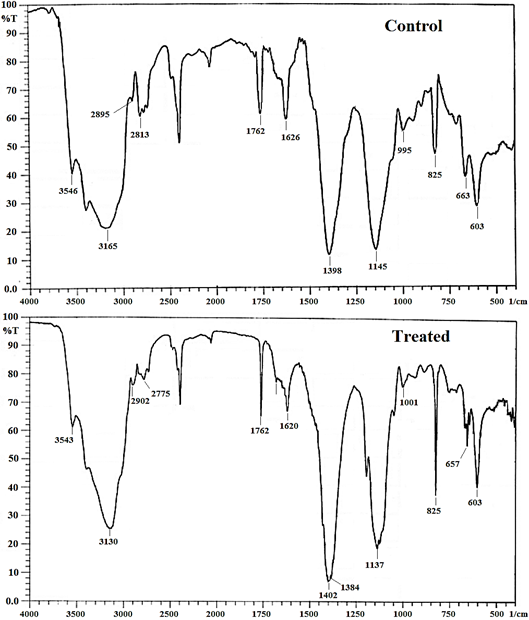 The UV spectra of both the control and treated MS media are shown in Fig. 6. It showed the absorbance maxima (λmax) at 201 nm in control sample and 198 nm in treated sample. It is reported that the UV absorbance occurred due to excitation of electrons from highest energy occupied molecular orbital (HOMO) to lowest energy unoccupied molecular orbital (LUMO) [33]. However, the UV analysis of MS media showed no change in the λmax of biofield treated sample as compared to the control. It indicated that energy gap between the HOMO and LUMO was not altered in the treated sample as compared to the control. 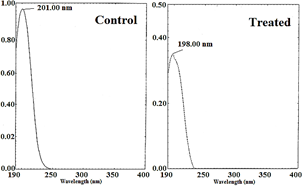 Based on these results, it is suggested that Mr. Trivedi's biofield energy treatment has the significant impact on the physical, thermal and spectral properties of MS media. As a result, the treated MS media could be utilized as a better medium in the plant tissue culture.

The authors are thankful to Trivedi Master Wellness, Trivedi Testimonials, and Trivedi Science for their sturdy support during this study. Authors would also like to acknowledge the entire team of MGV pharmacy college, Nashik for providing the instrumental facility, used in this study.