Non-alcoholic fatty liver disease (NAFLD) is a public health problem associated with the metabolic syndrome, such as obesity and insulin resistance [1]. Up to 30% of the population is afflicted by NAFLD and 5–10% of these patients develop non-alcoholic steatohepatitis (NASH), which can progress to cirrhosis and hepatocellular carcinoma [2,3]. Both obesity and insulin resistance are major risk factors for NASH and are characterized by an increase in circulating free fatty acids (FFAs) [4-6]. The excess serum FFAs in the context of insulin resistance are transported into hepatocyte by the fatty acid transporter. FFAs are esterified into neutral triglycerides in hepatocyte. However, surfeit of FFA is deleterious for hepatocyte. Saturated FFAs can induce hepatocyte apoptosis, a phenomenon termed lipoapoptosis [7-9]. Indeed, the lipoapoptosis of hepatocyte is a pathologic feature of NAFLD and correlates with disease severity [10-12]. Thus, the cellular and molecular mechanisms of hepatocyte lipoapoptosis are of biomedical interest.

The endoplasmic reticulum (ER) provides a contained environment for the synthesis and modification of membrane proteins and proteins destined to be secreted. Upon a number of biochemical, physiologic to pathologic stimuli, the ER protein processing system can be disrupted by disordered calcium (Ca2+) homeostasis and redox status, which subsequently cause the accumulation of unfolded or misfolded proteins, a condition defined as ER stress. Conditions of ER stress lead to the onset of the unfolded protein response (UPR) [13-16]. The canonical UPR signaling pathways are mediated by three UPR transmembrane sensors: protein kinase RNA-like ER kinase (PERK), transcription factor activating transcription factor 6 (ATF6), and inositol-requiring enzyme 1 (IRE1) [17,18]. In non-stressed situations, glucose-regulated protein 78 (GRP78) acts as a master regulator of the UPR through direct interaction with ATF6, PERK, and IRE1 and maintains them in an inactive form. Upon ER stress, GRP78 is titrated away by unfolded proteins, releasing the UPR sensors, which subsequently activates these sensors and initiates the activation and transduction of UPR signals. The UPR is a coordinated response to reduce the accumulation of misfolded proteins and restore ER function. If the efforts of UPR fail to restore ER homeostasis, the UPR will induce cell apoptosis to eliminate the stressed cells [16,18].

Intracellular FFAs are esterified within the ER, and inundation of hepatocyte with FFA disturbs ER function, which resulting in ER stress response [19,20]. The activation of UPR signal pathways have been well documented in NAFLD [19]. It has been postulated that ER may sense metabolic stresses associated with obesity and transmit signals that ultimately influence both pancreatic insulin secretion and hepatic insulin action. Since it has been reported that ER stress and inability of the UPR to reestablish ER homeostasis may be upstream components of lipotoxicity [19,21], the mechanisms of ER stress in lipotoxicity are poorly defined.

Human hepatocellular carcinoma cell line SMMC-7721 was cultured in Dulbecco’s modified Eagle’s medium containing 10% fetal bovine serum and 1% penicillin/streptomycin antibiotics. Cells were maintained at 37°C in a humidified incubator containing 5% CO2 and 95% air. Transfection of vectors for the expression of GFP and GRP78 were performed using Lipofectamine 2000 (Invitrogen, Carlsbad, CA, USA) according to the manufacturer’s manuals.

PA was dissolved in isopropanol at a concentration of 200 mM. PA was added to DMEM containing 1% bovine serum albumin to obtain a physiologic ratio between bound and unbound FFA in the media. The concentration of PA used in the experiments was 500 μM and was similar to the fasting total FFA plasma concentrations observed in human with non-alcoholic steatohepatitis.

Apoptosis was detected using the annexin V-FITC apoptosis detection kit (Invitrogen) according to the manufacturer’s manual. The experiments were repeated three times.

The primers used in this study: 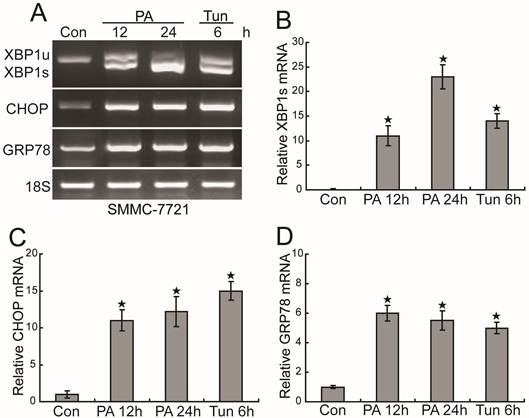 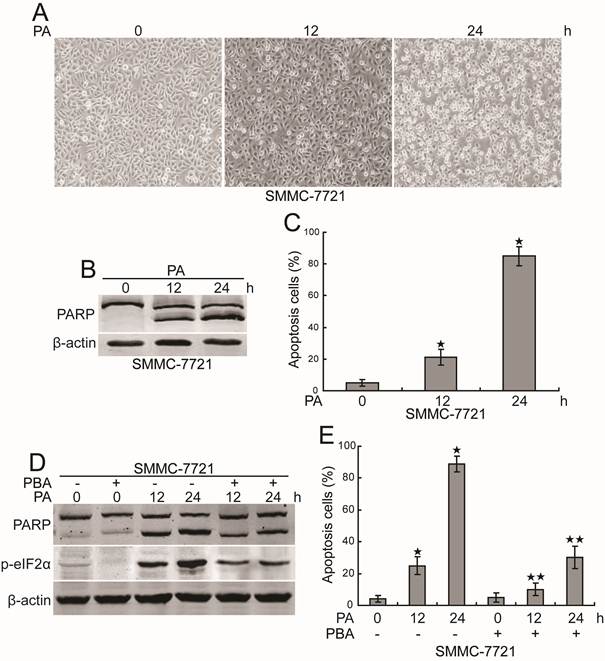 To investigate the potential role of PA in the induction of ER stress in hepatocyte, we first examined the ER stress induction effects of PA in SMMC-7721cells. The mRNA levels of ER stress markers, including XBP1, CHOP, and GRP78, were evaluated by RT-PCR from PA treated SMMC-7721 cells. We found that PA treatment markedly elevated both the mRNA levels of GRP78 and CHOP, and induced XBP1 mRNA splicing, an indicator of UPR activation, in SMMC-7721 cells (Figure 1A). Tun-treated SMMC-7721 cells were used as positive control. For quantitative analysis, the mRNA levels of spliced XBP1, GRP78, and CHOP were normalized to the corresponding 18S rRNA levels (Figure 1B-D). These data suggest that PA can initiate ER stress response in hepatocyte.

To make sure whether ER stress is involved in PA-mediated apoptosis, ER stress inhibitor PBA was used to block the activation of ER stress. The results showed that PBA pre-incubation not only inhibited the phosphorylation of eIF2α, an indicator of UPR activation, but also obviously decreased the apoptosis of SMMC-7721 cells upon PA treatment (Figure 2D & E). Taken together, these data suggest that ER stress plays an important role in PA-induced SMMC-7721 cells apoptosis. 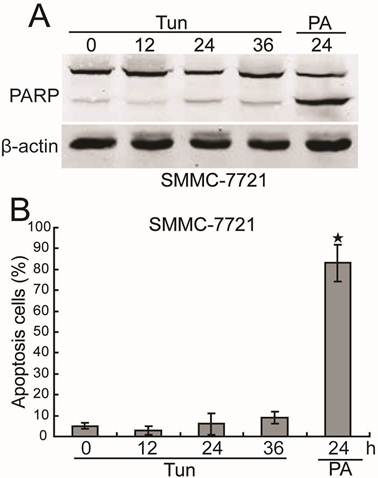 Figure 3. SMMC-7721 cells are resistant to ER stress-induced apoptosis. (A, B) SMMC-7721 cells were treated with tunicamycin (Tun, 2.5mg/ml) or palmitate (PA, 500 μM) for indicated periods and apoptosis was detected by Western blot analysis (A) and annexin V-FITC apoptosis detection kit (B). Data are presented as mean values ± SD of three measurements; bars, SE. *Significantly different from control value. 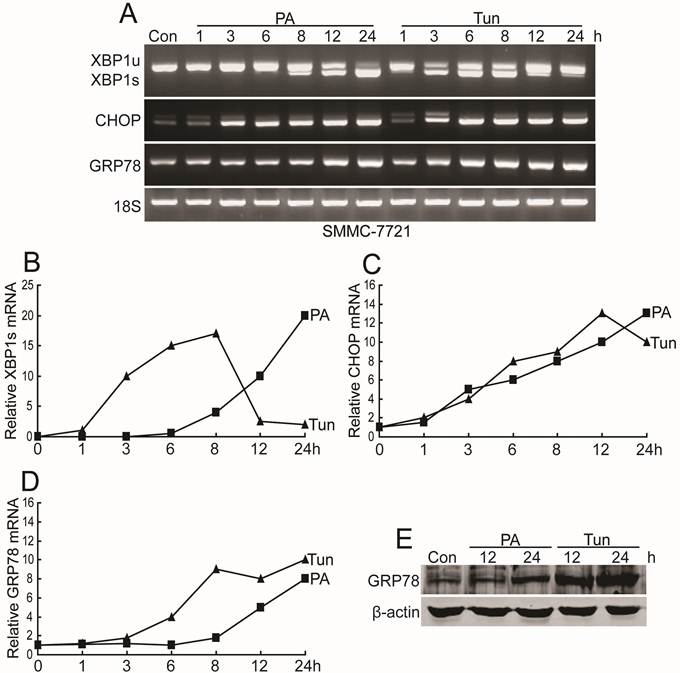 Since GRP78 plays a pivotal role in protecting cells from ER stress-induced apoptosis, we therefore examined the induction of GRP78 protein upon PA and Tun treatment in SMMC-7721 cells. As shown in Figure 4E, GRP78 protein levels induced by PA were much lower than that of Tun in SMMC-7721 cells. Thus, it is suggested that differential GRP78 accumulation might be a reason for the different roles of PA and Tun-induced ER stress in apoptosis inducing. 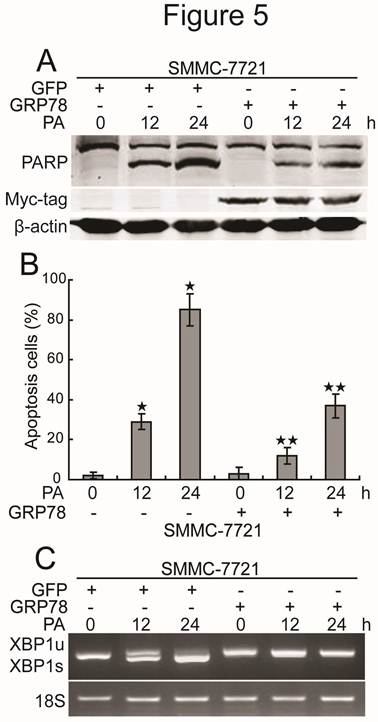 PA is one of the most common fatty acids in human diets as well as in animal and human fat tissue. PA is also the end product of de novo fatty acid synthesis and is generated in large quantity in subjects on a low-fat diet. The toxic effects of PA on cell viability have been reported in several cell types [26-30]. Although PA is implicated in the induction of apoptosis, it remains largely unclear how PA exerts its pro-apoptotic action. The results of the present study provide mechanistic insights regarding the pro-apoptotic effects of ER stress during PA-induced lipoapoptosis. Our data reveal that PA initiates ER stress and induces apoptosis in SMMC-7721 cells in part through decreasing the induction of GRP78, which results in persistent ER stress activation.

How does PA induce persistent ER stress? As a central regulator of ER homeostasis and the UPR, GRP78 plays multiple roles in protein folding, protein quality control, maintaining ER homeostasis, and controlling of the activation of transmembrane ER stress sensors [37-39]. Considering that PA-induced up-regulation of GRP78 mRNA is lower than that of Tun, it seems that PA can’t efficiently induce the accumulation of GRP78. This speculation was demonstrated by the findings that the accumulation of GRP78 protein was much lower than that of Tun. In our case, it is reasonable to speculate that PA-induced ER stress is persistent, and the stressed cells can’t recover from ER stress duo to the deficient induction of GRP78. It’s notable that GRP78 over-expression not only decreased the degree of PA-induced ER stress, but also inhibited PA-mediated apoptosis. These data reconfirm that the deficient induction of GRP78 exerts the pro-apoptotic effect of PA-induced ER stress.

The current study demonstrates that ER stress plays an essential role in PA-induced hepatocyte apoptosis. Our data provide mechanistic insights regarding the link between ER stress activation and FFA-mediated lipotoxicity. The ability of PA to inhibit GRP78 induction exerts the pro-apoptotic effect of PA-induced ER stress. More detailed studies on the mechanisms of PA in repressing the accumulation of GRP78 will contribute to the understanding of molecular mechanisms of lipoapoptosis.