The Parametric Study of Sweetening New Method from Sour Petroleum

Abstract: The sweetening process is investigated in this paper. The superficial velocity and the characteristic length is evaluated in this research. The results dhow the X factor as sweetening index is improved with the increasing the characteristic length and the decreasing the superficial velocity. In addition, the increase in the amount of charachtristic length which is done in the experiments by the increase in the height of bed is considered to evaluate the values of pressure drop through the nano catalytic packed bed.

Coking temperature also affects the sulfur content of oil, though in less degree, mainly due to the vaporization and removal of the low sulfur containing volatile matter which results in a reduction of the total sulfur content in the coke [12,13].

Most of the sulfur in oil exists as organic sulfur bound to the carbon matrix of the coke [13 and 14]. Some sulfur could also exist as sulfates and as pyritic sulfur [13] but these do not in general make up more than 0.02% of the total sulfur in coke (3). In at least one case, however, pyritic sulfur was reported to be as high as 0.4% (14). Free sulfur may occasionally be present [14].

The structure of organic sulfur compounds in oil remains largely unknown, and no precise analytical methods exist today to determine exactly this structure [13,15]. The organic sulfur compounds identified by the Bureau of Mines in four crude oils include thiols (alkyl, cyclic, and aromatic), sulfides (alkyl, cyclic, and alkylcycloalkyl), disulfides (alkyl, cyclic, and aromatic), and thiophenes [14]. The thiophenes are most prevalent in the heavy fractions of crude oils and hence in coke. Other sulfur compounds are less prevalent in coke. Work done by Sabott [15] indicates that sulfur may not be present in coke in the form of thiols or aromatic and aliphatic sulfides, and sulfides do not make in fact more than 0.003% of the total sulfur in oil [13]. Sulfur may exist in the coke in many forms [13]: (a) as thiophenes attached to the aromatic carbon skeleton; (b) attached to side chains of aromatic or naphthenic molecules; (c) between the aromatic sheets or on the surface of clustered molecules; (d) on the coke surface or in coke pores bound by capillary condensation, adsorption, or chemisorption.

(a) The first is an initial phase of desulfurization (300-1100 K), with desorption of sulfur bound on the surface or in the pores, and the simultaneous cracking of side chains of aromatic molecules. The sulfur bound on the surface refers to the S-C bonds in the outer layers of clusters (pre walls, surfaces) that can be physically exposed to the fluid environments. The process of sulfur separation starts at 770-820 K, first increasing to reach a maximum at about 1000 K and then decreasing until it stops at 1270 K [12]. The maximum amount of sulfur removed in this stage is about 25%, which can be taken as a rough indication of the amount of non-thiophenic sulfur in coke. The top three oil producing countries are Russia, Saudi Arabia and the United States. About 80 percent of the world's readily accessible reserves are located in the Middle East, with 62.5 percent coming from the Arab 5: Saudi Arabia, UAE, Iraq, Qatar and Kuwait. A large portion of the world's total oil exists as unconventional sources, such as bitumen in Canada and extra heavy oil in Venezuela. While significant volumes of oil are extracted from oil sands, particularly in Canada, logistical and technical hurdles remain, as oil extraction requires large amounts of heat and water, making its net energy content quite low relative to conventional crude oil. Thus, Canada's oil sands are not expected to provide more than a few million barrels per day in the foreseeable future.

In its strictest sense, petroleum includes only crude oil, but in common usage it includes all liquid, gaseous, and solid hydrocarbons. Under surface pressure and temperature conditions, lighter hydrocarbons methane, ethane, propane and butane occur as gases, while pentane and heavier ones are in the form of liquids or solids. However, in an underground oil reservoir the proportions of gas, liquid, and solid depend on subsurface conditions and on the phase diagram of the petroleum mixture.

An oil well produces predominantly crude oil, with some natural gas dissolved in it. Because the pressure is lower at the surface than underground, some of the gas will come out of solution and be recovered (or burned) as associated gas or solution gas. A gas well produces predominantly natural gas. However, because the underground temperature and pressure are higher than at the surface, the gas may contain heavier hydrocarbons such as pentane, hexane, and heptane in the gaseous state. At surface conditions these will condense out of the gas to form natural gas condensate, often shortened to condensate. Condensate resembles petrol in appearance and is similar in composition to some volatile light crude oils.

The proportion of light hydrocarbons in the petroleum mixture varies greatly among different oil fields, ranging from as much as 97 percent by weight in the lighter oils to as little as 50 percent in the heavier oils and bitumen’s.

The hydrocarbons in crude oil are mostly alkanes, cycloalkanes and various aromatic hydrocarbons while the other organic compounds contain nitrogen, oxygen and sulphur, and trace amounts of metals such as iron, nickel, copper and vanadium. The exact molecular composition varies widely from formation to formation but the proportion of chemical elements varies over fairly narrow limits as follows. Distillation, the process by which oil is heated and separated in different components, is the first stage in refining. Crude oil is any naturally-occurring flammable mixture of hydrocarbons found in geologic formations, such as rock strata. Most petroleum is a fossil fuel, formed from the action of intense pressure and heat on buried dead zooplankton and algae. Technically, the term petroleum only refers to crude oil, but sometimes it is applied to describe any solid, liquid or gaseous hydrocarbons. Petroleum consists primarily of paraffin’s and naphthenes, with a smaller amount of aromatics and asphaltic. The exact chemical composition is a sort of fingerprint for the source of the petroleum.

The modified carbon nano particles as carbon nano catalysts are applied for sweetening process of two samples of oil which contain H2S contaminant. So, the characteristic length and superficial velocity as major parameters are evaluated in this paper.

All of the equipment’s which are used in this research are made from stainless steel-316. The hydrogen sulfide and also, the sulfur compounds have corrosive property. So, this type of material is used for making this setup. The sour oil as feed is entranced to the distributer and extranet it and contact the catalytic bed. The mass transfer is occurred in the catalytic bed. The sour oil is sweetened, finally. The packed bed contains layers equipped with nano carbon particles on their surfaces. Figure 1 shows a schematic of this layered packed bed. Temperature in bed is provided by an electrical heater which is around the vessel and process pressure by pump. The nano particles are distributed between the different layers of bed. The mass transfer rate of sweetening process can be improved severely for the huge amount of specific area of nano particles. The porosity factor of nano particles are increased by the surfactants. The adsorption is occurred and so, petroleum is sweeted, finally. 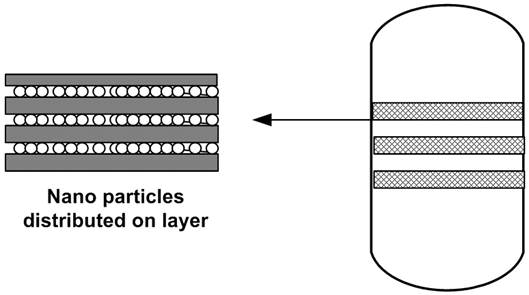 Sulfur removal from oil stream by mixed nano catalytic bed depends on the mass transfer parameters such as liquid resistance. Since the reaction is assumed to occure on the solid surface so solid resistance in mass transfer is not considered. In this section, turbulency and liquid velocity is investigated. Changing in oil flowrate changes the value of oil velocity. The changing in the superficial velocity and its effect on the X facor is evaluated in the Figure 2. The X factor is defined as (1-C/Co). The C is determined as the concentration of hydrogen sulfide in the outlet oil per the concentration of hydrogen sulfide in the feed sream. 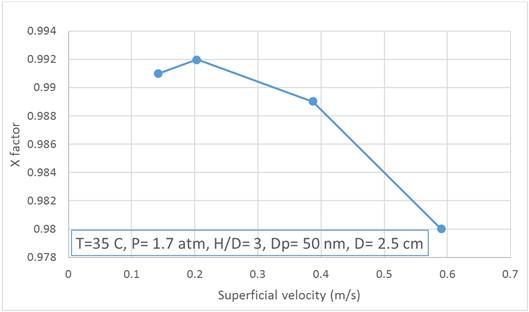 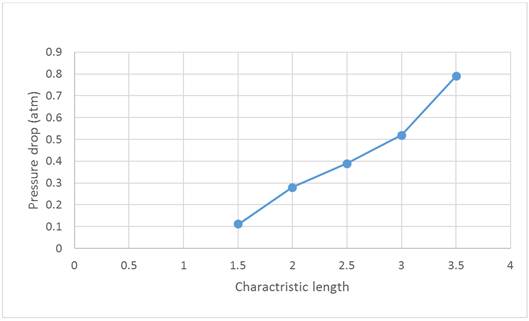 In this experimental packed bed, oil stream flows downward due to gravitational force. The increase in th eamount of charactristic length indicates on the increase in the catalytic length. The increasing in the characteristic length cause to the pressure drop. The pressure drop can be increasng from 0.1 atm to the 0.8 atmosphere when the characterestic length increases from 1.5 to 3.5. So, the heigth of bed can not benefit. The cost optimization must be done to determine the optimum length.

Operation conditions as pressure and temperature are so important in the effectiveness and feasiblity of the process. The proposed low ranges of tempertaure and pressure are considered to evaluated the cost of the process.

The nano catalyst is applied for desulfurization of sour oil. The operating conditions and also, the characterstic length is evaluated in this study, experimentally. The optimum operation temperature and pressure, bed length and bed diameter, oil flow rate, catalyst diameter and sulfur initial concentration are analyzed by value of X factor and selected. The X factor states the sweetening index. In addition, the pressure drop as undesired parameter is evaluated in this paper. The vessel as the catalytic reactor, high resistance vessel with thick walls is required. So, usage of pressurized vessel with 1 atm to 2 atm increases the process cost from 22 to 69$.