In Ethiopia, malaria is a serious public health problem. Unlike other sub-Saharan African countries, malaria is caused by two malaria parasite species in Ethiopia: Plasmodium falciparum and P. vivax, which account for 60 percent and 40 percent of cases, respectively (1). Microscopic diagnosis of malaria based on examination of blood films stained with Giemsa is the gold standard method of diagnosis. This method of diagnosis also gives quantitative results that can be used in the evaluation of the degree and rate of clearance of parasitaemia. Microscopy remains to be the mainstay of parasite-based diagnosis in most large health clinics and hospitals in Ethiopia (2).

Early diagnosis and prompt, effective treatment is the basis for the management of malaria and key to reducing malaria mortality and morbidity (3). Ethiopia’s treatment guidelines recommend artemether-lumefantrine as the first line treatment for P. falciparum and chloroquine for P. vivax malaria. In addition, since 2005, the country has changed its antimalarial drug policy from chloroquine and fancider as first line treatment of uncomplicated malaria to Coartem, which is a more expensive treatment that requires definitive diagnosis to confirm cases of malaria prior to treatment in order to reduce unnecessary treatment. To ensure that patients are appropriately treated with the correct drug, it is important that patients receive quality parasitological diagnosis (2, 3,4).

However, like all detection methods, microscopy is an imperfect technique (5). Poor microscopy has long been recognized in practice and is a function of multiple factors, including training and skills maintenance, slide preparation techniques, workload, condition of the microscope, and quality of essential laboratory supplies. Even among local laboratories with similar equipment and equal training and among reputed experts, abilities vary significantly (6,7).

In the absence of accurate laboratory diagnosis false negatives can result in untreated malaria patients and potentially severe consequences, including death. False negatives can also significantly undermine both clinical confidence in laboratory results and credibility in the community. False-positive results are equally problematic. Patients presenting with fever not caused by malaria may be misdiagnosed and the true cause of their fever not treated. This can also have severe consequences, including the death of the patient. In addition, misdiagnosis of malaria will result in the unnecessary prescription of high cost drugs and the unnecessary exposure of the patient to potentially toxic drugs. This is a needless burden to both the patient and the medical services (8, 9, 10).

A cross - sectional study was conducted to assess the quality of malaria microscopy diagnosis in Hawassa city health facility laboratories from November 2012 to January 2013 in Sothern Nations Nationalities and Peoples Region (SNNPR), Hawassa city. The city is located 275 kms south of the capital Addis Ababa.

Data were collected by distributing a standardized, pre-validated malaria panel slides and questionnaire for the study populations. The malaria panel slides were prepared in sets of 6 slides of standardized malaria blood smears by investigators according to WHO standard operating procedures for establishing a national reference slide bank (3) and then validated by three trained expert laboratory professional working at Hawassa Regional Laboratory.

The six malaria slides containing high density, low density, mixed and negative malaria slides were included in a set [Sample 1(Pf 3+) , Sample 2 (Pf1+), Sample 3 (Pv3+), Sample 4 P.v (1+), Sample 5 mixes of Pf and Pv and Sample 6 Negative]. The blood films were made of thin and thick preparation and stained with Giemsa.

The slides were distributed to the participant laboratories. Laboratory professionals read all the six panel slides as if they examined routine clinical blood film samples. After the slide reading process was completed, the completed result forms were submitted to the investigators. Each result was exhaustively checked for completeness and accuracy. All complete data was entered in to a computer and summarized using Ms Excel. Statistical analysis was done using SPSS; version 19, 95% confidence interval was calculated using Win Pepi version 11.

Operational definitions were outlined for the results reported, as correct, major and minor errors. Identification of correct parasite and density of parasitemia were grouped in correct result. Major error included reporting negative for a positive slide and vice versa, reporting non P. falciparum for a P. falciparum slide or non P. vivax for a P. vivax slide, density variation ≥ 2+ from the reference, and when no species identification or no density is reported. Minor error were categorized as reporting density variation of 1+ from the reference, and reporting mixed infection for a single species of malaria. For the Pf /Pv mixed sample, correct diagnosis was considered as reporting both Pf and Pv, reporting negative and single species of parasite were considered as major and minor errors respectively. For the negative sample, reporting positive regarded as a major error. Error in density refers to correct parasite identification but deviation in density report from the reference.

This study reported the findings of an assessment of malaria microscopy in 10 health facilities in Hawassa city administration. The survey involved 51 laboratory professionals from 8 health centers and 2 hospitals. 71% of laboratory professionals were from health centers and 29% from hospitals. The response rate was 85%. In the assessment 306 malaria slides [S1-S6] were distributed to the health facilities laboratories. 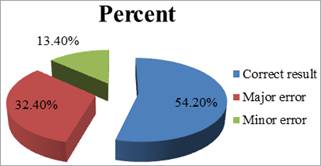 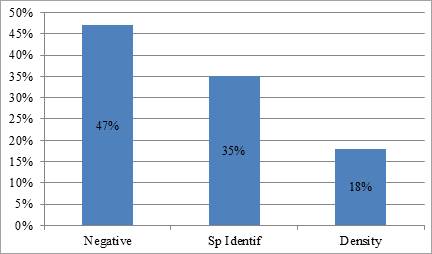 Almost half of the participants have 2-6 years of experience in medical laboratory service (it is assumed they perform malaria microscopy regularly in endemic setting). A quarter of them have less than two years experience, and the rest quarters have more than six years of experience. Majority (73%) of the laboratory professionals possess a diploma in medical laboratory technology (MLT) training, while 10% have certificate (Junior Laboratory Technician) and 18% BSc degree in MLT. 53% of participants had never participated in a formal training on malaria microscopy, and among those who did, more than half were trained earlier than 2008. All of the participants purchase the stoke Giemsa solution and prepare the working Giemsa solution with tap water.

Research showed that impaired microscopy based diagnosis in hospital laboratories is common. (12). Likewise, among 204 blood films examined from [S1-S4] 83 (41%) of them were reported with major error. Specifically 33% of these examinations had a false negative and species misidentification report. Errors in detection and identification of Pf 3+ and Pf 1+ slides were 22% and 43% respectively. Similarly an article in Congo reported 16% and 35% of participants reported a similar finding for Pf 4+ and Pf 1+ malaria, respectively (13). It is known that both P. falciparum and P.vivax infection are common in Ethiopia and species identification is essential for patient management (1). Although it is underreported, failure in identification of P.falciparum and P.vivax with routine microscopy is common (14). Our study revealed about 18% of participants failed to identify P. falciparum. Similarly the Congo article reported 23% of participants failed to identify Pf. A study in Ontario Canada reported 27% of laboratories failed to correctly speciate Pf (15) and 21% (56/267) failure rate for Pf identification registered in London England (16). In P. vivax slides 11% of our participants failed to identify P vivax parasites. Overall, our survey revealed 1:3 of blood films sent for malaria microscopy examinations to Hawassa laboratories were incorrectly misinterpreted; a worse report than the 1:7 ratio in South Africa which was thought alarmingly high (17).

The chance of false negative results increases with decreasing parasite densities (7,19). Insufficient reading time, poor smear quality, lack of motivation, and poor equipment will also lead to false negative smears (20). Greater microscopist experience and increased examination time and number of microscopic fields examined reduce such an error (21,22). Likewise, this survey found more correct results in high density Pf 3+ slide (59%) than Pf 1+ slide (53%). Similarly, more major errors were obtained (45%) in Pf 1+ slide than Pf 3+ slide (33%). This phenomenon was also observed in the Congo survey where more correct results obtained in the high density (Pf 4+) sample than Pf 1+, and more major errors were obtained in the Pf 1+ slide than (Pf 4+) (14). When the density of slide is low, misidentification of parasite species and false negative report (reporting negative) is more likely than when the reference density is high according to our research. Reporting density of parasite is important in case management of malaria, therefore laboratory professionals should have the basic skills in calculating malaria parasitemia with standard techniques.

Training: It has been found that half of the participants had never participated in a formal training on malaria microscopy after their formal years of training in College, and among those who did; more than half were trained earlier than 2008. This reflects there is scarcity of training and refreshment courses in malaria diagnosis. Giemsa quality: Errors in diagnosis are more common when Giemsa staining is poor (23). The slides used for the assessment in this survey were well prepared and stained with Giemsa. Therefore, the slide preparation and staining doesn’t have any relation with the poor microscopy results obtained in this survey. Additional data on interview of the preparation of Giemsa indicated all laboratories in Hawassa use tap water to prepare working Giemsa solution. Contrarily, in Congo, for preparation of the working solution, half (52.3%) of participants used a buffer solution, 29.9% and 17.8% used distilled water and regular water (mostly tap water) respectively. It is however recommended to use buffer solutions in preparation of working Giemsa to achieve optimal quality of staining in blood films (24).

Moreover, in an open ended interview question for improvement of malaria diagnosis in general and malaria microscopy in particular, majority of participants suggested the need of training and refreshment courses in regular manner. Secondly the requirement of External Quality Assessment was mentioned. Availability of quality of Giemsa solution and regular supply of methanol for thin film preparation were mentioned in relation to improvement of species identification in malaria diagnosis. Moreover, availability of good quality microscope and posting SOP (standard operating procedures) were also mentioned as necessity for the improvement of malaria diagnosis.

The present assessment revealed a poor quality of malaria microscopy in Hawassa city administration health facilities. The questionnaire interview indicated half of the laboratory professionals had no any formal training on malaria microscopy, and that the buffer used for preparation of Giemsa working solution is not appropriate. Therefore, this research recommends responsible bodies to help improve the quality of malaria microscopy and the knowledge and skill of laboratory professionals in malaria parasite examination. A limitation relates to the coverage of this assessment, as less than 8.3% of hospitals and 1% of the health centers in region wide were included. Therefore, other similar study should be conducted in large scale.

We acknowledge the SNNP regional laboratory for the preparation of panel slides. We are grateful for all health facilities and laboratory professionals participated in the survey.