Contents
Abstract Keywords 1. Introduction 2. Methods and Base of Research 3. The Results of Researches 4. Results of Efficiency of Treatment of Patients with Backbone Pathology 5. Conclusion References

A combination of phototherapy (Bioptron) with underwater spinal traction is a general conservative treatment method of degenerative-dystrophic processes developing in anatomic structures of the spine and frequently attended by the pain syndrome.

"VIP light phototherapy leads to a rapid six-fold increase of interferon-γ (IFN-γ), the key immunomodulator in blood, even its initial level being normal. The cell immune response activation (the functional state of monocytes, macrophages, natural killers and cytotoxic T-lymphocytes) is the key function of this cytokine that increases antiviral and antitumor resistance of the organism" (Prof. K.A. Samoilova, 2003) [11,15].

It has been already found that nitrogen oxide (NO) formation in the systemic circulation is the primary mechanism for visible and IR light effects which are: widening of blood vessels (vasodilation) and platelet disaggregation, without them phototherapy would hardly be highly efficient.

Currently there is ongoing research of processes proceeding in water and aqueous solutions exposed to electromagnetic fields [5,10,12,13].

Water is known for its ability to copy and record information.

As known from the studies by N.I. Sinitsin et al. (1998), human tissues and water have identical resonance frequencies. This similarity of resonance EHF spectra of human media and water indicates the same physical nature of millimeter-wave interaction with the molecular structure of water in both these objects [1,12].

2. Methods and Base of Research

The first part of the research concerns the study of light absorption in water after EMR source action:

3.  4 minute exposure of water to polychromatic VIP light and СО2 at 0°C, simultaneously;

5.  15 minute exposure of water to polychromatic VIP light from 10 cm above surface.

3. The Results of Researches

4.  – 4 minute irradiation with simultaneous saturation by СО2 cooled down to 0°C;

The data on spectral analysis of water irradiated by 5.6 mm electromagnetic waves with the frequency of 50-52 GHz (Fig. 2) are virtually identical to these of water exposed to polychromatic VIP light with 480-3400 nm wavelengths and of 625THz - 88 THz respective frequencies, i.e. the best changes also occur after 4 and 15 minute irradiation (Fig. 2, curves 3 and 7, respectively). At the same time, note that 2, 6, 10 and 30 minute irradiation of water by 5.6 mm, 50-52 GHz electromagnetic waves and 4 minute irradiation of water with its simultaneous saturation by СО2 at 0°C give no significant changes. 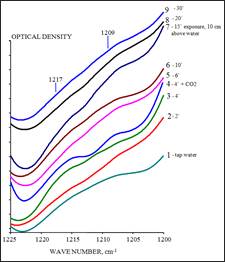 Fig. 1. IR-spectra of water after exposure to polychromatic VIP light of 480-3400 nm wavelengths and 625 THz -88 THz respective frequencies from Bioptron. 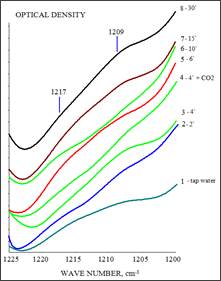 4.  – 4 minute irradiation with simultaneous saturation by СО2 cooled down to 0°C;

To further examine the light absorption properties of water, after 4 and 15 minute polychromatic VIP light irradiation by Bioptron device (Fig. 3, curves 1 and 3, respectively), the source of electromagnetic waves was switched off, and 26 and 15 minutes after, i.e. 30 minutes after the irradiation of water started, a significant increase of light absorption was detected using the IR-spectroscopy (Fig. 3, curves 2 and 4, respectively). 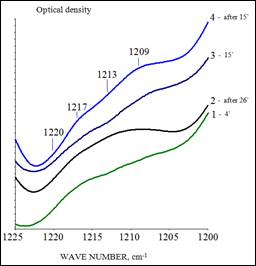 Fig. 3. IR-spectra of water after exposure to polychromatic VIP light from Bioptron device. 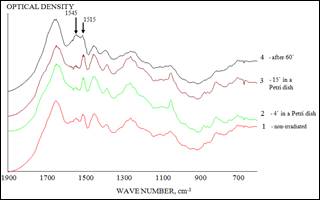 2.  – a spectrum of plasma after 4 minute exposure to polychromatic VIP light in a Petri dish;

3.  – a spectrum of plasma after 15 minute exposure to polychromatic VIP light in a Petri dish;

4.  – a spectrum of plasma 60 minutes after the 15 minute bathing in water preliminarily exposed to Bioptron polychromatic VIP light during 15 minutes.

The results of this experiment show that the blood plasma absorbs light (Fig. 4, curves 2, 3 and 4, as compared with the control), as water does, but also indicate a significant light absorption increase in it an hour after 15 minute bathing in water preliminarily exposed to Bioptron polychromatic VIP light during 15 minutes. Consequently, there is reason to believe that further investigation of this problem (the phenomenon of electromagnetic wave interaction with water) is of special interest.

Such a coincidence with the results of this research needs further study according to a separate program. Prokhorov Institute of General Physics RAS took on with the investigation of polychromatic VIP light.

It is known that the reason for Raman scattering is association of electron motion with the nuclear one.

Mutual arrangement of the nuclei defines a field, where the electron cloud locates.

The ability of electromagnetic cloud to be deformed due to the effect of electric field of an electromagnetic wave depends upon configuration of nuclei at a particular moment and, in case of intramolecular vibrations, varies with their frequency. And vice versa, when the electron cloud deforms, vibrations of the nuclear framework of the molecule may occur [14].

The combined scattering itself may be represented as a "reaction" of the photon interaction with a molecule:

where the internal energy of the molecule increases (Ea→Ea` = Ea + ∆E), and the photon energy decreases (ħw → ħw` + ∆E) accordingly. A process (γ + A` → γ + A) is also possible, in which an excited molecule transits to a lower energy state, whereas the photon energy increases: ħw+E`= ħw`+E, i.e. along with the fundamental radiation frequency, the spectrum of scattered light obtains new components. These very new frequencies in the scattering spectrum (which depend upon the molecular structure) are called the Raman spectrum.

In this case, the internal state of the molecule changes. The molecule transits from one energy state E (described by quantum numbers n, v and j – electronic, vibrational and rotational (angular momentum), respectively) to other ones, E`.

In the standard experimental setup for the Raman scattering observation, the test substance is irradiated by a frequency, at which it does not absorb, i.e. the photon is not large enough to translate molecules into the excited electronic state. However, interaction of this quantum induces an agitation of the molecular shell, which rearranges itself thus changing vibrational state of the nuclear skeleton. Meanwhile, the molecule transits to a new vibrational state, v`, located above (e.g. from v = 0 to v` = 1) or beneath (e.g. from v = 1 to v` = 0) the initial state, v.

The Raman scattering is incoherent, because different molecules have independent vibration phases [2,3]. 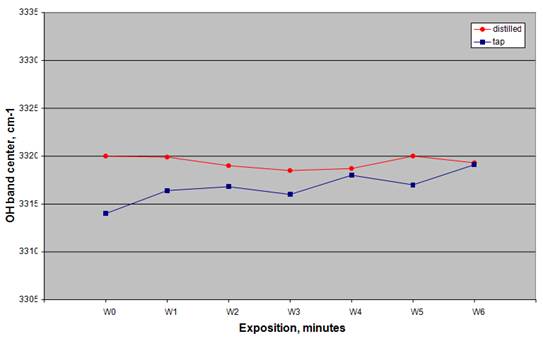 An experiment with the Raman spectroscopy of two water samples: 1) double-distilled water and 2) tap water, after irradiation by polychromatic VIP light was set up (Fig. 5), in which the position of OH stretching vibration band center was measured.

Several series of measurements of 1000 pulses each at different exposures with the frequency of 5 Hz were performed. To calculate the weighted center of the spectrum taken for some characteristic value, OH band spectra were processed by the Gaussian weighting function.

For the first sample (double-distilled water), 7 measurements were performed: before irradiation and after irradiation that lasted 1, 2, 3, 4, 5 and 6 minutes. Corresponding points on the Figure are denoted as W0, W1, W2, W3, W4, W5 and W6 (Fig. 5; is distilled water).

For the second sample (tap water), more 7 measurements were performed: before irradiation and after irradiation that lasted 1, 2, 3, 4, 5 and 6 minutes (see Fig. 5). The graph shows polychromatic VIP light effects on water. Water is activated.

Water pH variations were also determined. In the first sample (double-distilled water), prior to irradiation pH 7.0 was observed; after 4 minute irradiation, pH 6.5 was measured.

For the second sample (tap water), pH values are: 6.5 prior to irradiation and 6.0 after 4 minute irradiation.

Water pH was studied on the basis of Laboratory of Sanitary-Epidemiological Station, Eastern District of Moscow.

4. Results of Efficiency of Treatment of Patients with Backbone Pathology

Based on the above, for the first time, we applied underwater phototherapy combined with underwater spinal traction (Fig. 6, 7).

The technical result of the proposed method is the maximal therapeutic effect due to provision of a single-shot light impact on the whole skin area of a man under the water (Fig. 6).

At the early stage of bone change development, the metered dose traction promotes an increase of diastasis of spurs and pain relief.

The loading is smooth, accurately controlled and monitored, and provides the maximum therapeutic effect, as well as eliminates the possibility of excessive loads. Traction is smooth, giving the patient an opportunity to adapt to the stress load, and is quantity and time controllable (Fig. 7). 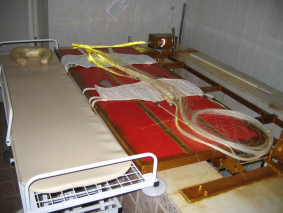 Fig. 6. A unit for underwater phototherapy. 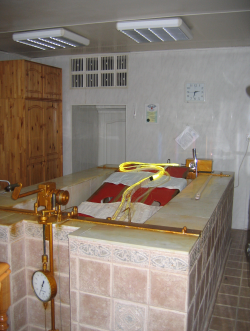 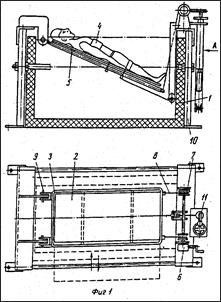 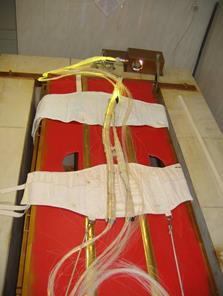 Fig. 9. A unit for underwater spinal traction with underwater phototherapy.

The second part of the research is devoted to evaluation of the treatment efficiency, performed in 2003-2008 by City Policlinic No. 69, Eastern District of Moscow, participants: 745 patients aged from 17 to 60, with the spine pathology (Fig. 10).

All patients were split into five groups:

i.  Patients treated with medication – 175 people; 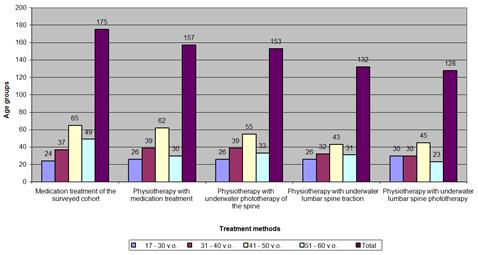 The third group supersedes the rest age groups – 36%; the second group gives 24%; and the first age group is the smallest – 18%.

Fig. 14 shows the distribution curve of patients with osteochondrosis of the lumbosacral spine with 5-13 mm hernia protrusion into the spinal canal and up to 5 mm protrusion. All patients are distributed by 9 clinical signs (Fig. 15):

3.  Pain caused by axial load on the spine;

5.  Erect lordosis with the back muscle strain;

8.  Reduction or loss of T-reflexes in pelvic limbs;

Fig. 16 presents the results on treatment efficiency for all patients of these five groups:

The treatment efficiency results are statistically confident with p < 0.05. 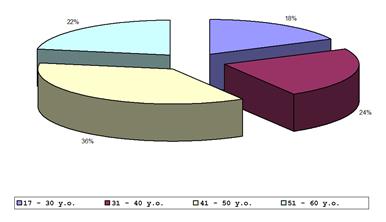 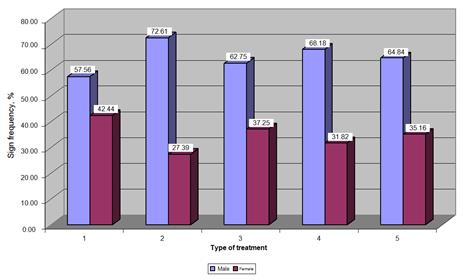 Fig. 12. Distribution of patients by gender. 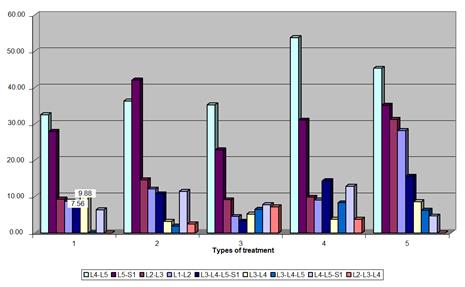 Fig. 13. Distribution of patients by localization of hernias (n=745). 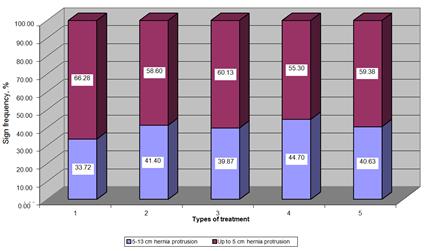 Fig. 14. Distribution of the patients with osteochondrosis of the lumbosacral spine. 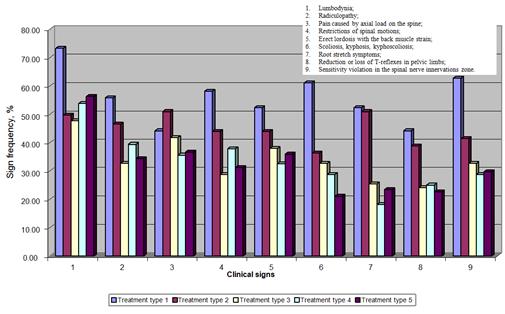 Comparison of the efficiency results for 5 types of treatment.

The efficiency of five implemented types of treatment was evaluated by comparing the following 8 criteria:

3-Unchanged – the absence of clinical dynamics. 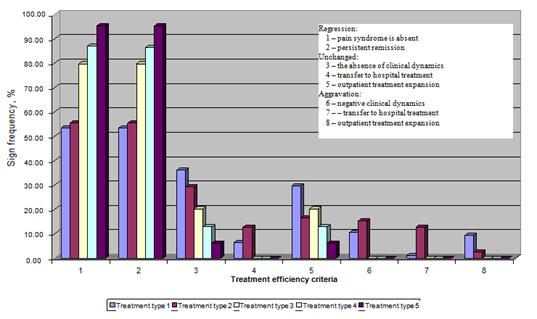 Types 3 and 4 allow clinical regression – persistent remission, of the same reliability, whereas the rest types (currently 1 and 2) are much less effective (with statistically confident differences).

The MRI results after the treatment on December 18, 2006 indicate the rear L4-L5 disc hernia on a broad base sized 6.5 mm, with moderate narrowing of redicular holes and dural sac deformation.

The height and structure of vertebral bodies weren’t changed.

Conclusion: as compared with the survey on June 05, 2006, clear positive dynamics is observed.

The patient refused the operative treatment. 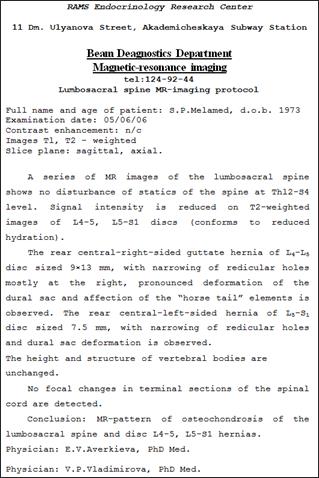 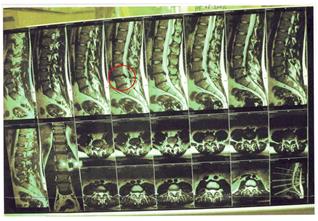 Fig. 18. Magnetic and resonant imaging of lumbosacral spine before starting the treatment. 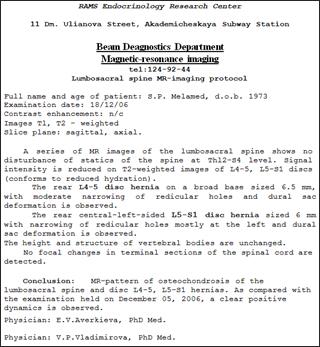 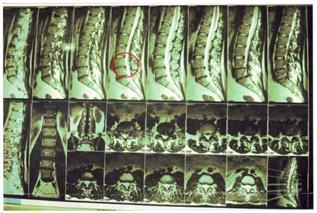 Fig. 20. Magnetic and resonant imaging of lumbosacral spine after starting the treatment.

1.  Carried out experiments show that water exposed to polychromatic VIP-light (Bioptron) is activated that manifests in changes of physical and chemical properties, namely, in changes of optical absorption spectra, Raman scattering and pH of water.

2.  For water activation, time of exposure to polychromatic VIP-light is important, and any deviation from this value causes water deactivation.

3.  After polychromatic VIP-light (Bioptron) exposure termination, water, both itself and in human organism, continues activating for a definite time.

4.  Along with these physical and chemical manifestations, energy and information communication to the human organism was observed, proceeding, probably, via insensible water evaporation system.

5.  The treatment results of patients with the spine pathology indicate the increase of physiotherapy efficiency, as combined with the medication therapy: comparing with group I of patients, treated solely by medication, regression increases by 8.4%, and unchanged and aggravation states decrease by 3.7 and 4.8%, respectively.

7.  For patients treated by physiotherapy with underwater spinal traction, the efficiency is high: regression – 87.1%, unchanged – 12.9%, no aggravations.

9.  We assume that when in the spine pathology inflammatory processes dominate, underwater phototherapy combined with other treatment increases overall treatment efficiency. If in the spine pathology degenerative changes in the intervertebral discs prevail, the application of underwater spinal traction in combination with other methods, underwater phototherapy in particular, sharply increases efficiency and prolongs persistent remission of the disease.