Abstract: Corneal blindness is a major health problem worldwide and infectious keratitis is one of the predominant causes. The incidence of fungal keratitis has increased over the last few years. Keeping this in mind, this study was conducted to evaluate the frequency of positive fungal cultures in infectious keratitis and of the various fungal species identified as etiologic agents in patients with corneal ulcer attending the ophthalmic departments of 3 hospitals in Riyadh. Corneal scrapings from 100 patients of corneal ulcer with suspected fungal etiology were subjected to direct examination by 10% KOH and lacto-phenol cotton blue mount. Also swabs of diseased eyes were taken with sterilized swabs. The specimens were also inoculated directly on to Sabouraud’s dextrose agar in C-shaped streaks. From 100 patients of corneal ulcer investigated, only 52% of patients were positive. Males were more commonly affected than females (69.23% and 30.76%), respectively. The age of patients was ranged from 28-55 years. 18 (34.61%) patients with fungal keratitis were laborers, 15 (28.84%) teachers, 7 (13.46%) housewives, 6 (11.53%) shepherds and 6 (11.53%) were civil engineers. Corneal trauma with stone chips and metal splinters appeared to be the most common predisposing factors of fungal keratitis (30.76%) followed by ocular surgery and corneal disease (26.92%). Of 52 positive patients with corneal ulcer surveyed the most important causative agents of fungal keratitis were Aspergillus spp. (44.23%), followed by Candida spp. (17.30%) and Fusarium spp. (17.30%). Because of serious consequences of infectious keratitis, it is important to know the exact etiology of fungal keratitis to institute appropriate therapy in time. Laboratory confirmation should be before pre scribing corticosteroids and antifungal.

According to the World Health Organization report, it is estimated that ocular trauma and corneal ulceration result in 1.5 to 2 million new patients of corneal blindness annually, posing a major public health problem for developing countries (Saha et al. 2009). Fungal keratitis is a major blinding eye disease in Asia and 44% of all central corneal ulcers in South India are caused by fungi (Tuladhar et al. 1988 and Sharma et al. 1993).

Fungi cannot penetrate the intact corneal epithelium and do not enter the cornea from episclerallimbal vessels. The principal routes of inoculation are introduction concurrent with a penetrating or perforating wound, either mechanical injury or surgery, and introduction through an epithelial defect (Jones, 2006).

Trauma is the major predisposing factor in healthy young males engaged in agricultural or other outdoor work. The traumatising agents can be of plant or animal origin (even dust particles), that either directly implant fungal conidia in the corneal stroma or abrade the epithelium, permitting invasion by exogenous fungi. Ocular and systemic defects, prior application of corticosteroids and prolonged use of antibiotic eye drops are also considered as predisposing factors (Insans et al. 2013).

The ocular surface is constantly exposed to a large number of infectious agents; however, only a few pathogens can cause a corneal infection because several mechanisms play a major role in the protection of eye surface from filamentous fungi which cause fungal corneal ulcers in humans (Insans et al. 2013).

The prevalence of individual pathogens largely depends on geographical and climatic factors. Fungal keratitis occurs mainly in the warm climates and coincides with seasonal increase in temperature and humidity (Saha and Das, 2006). More than 105 species of fungi, classified in 56 genera, have been identified as the etiological agents of fungal keratitis. Fungal keratitis can cause a deep and severe corneal ulcer. It is caused by Aspergillus spp., Fusarium spp., Candida spp., Rhizopus, Mucor, and other fungi (Thomas, 2003). Fusarium spp. and Aspergillus spp. are responsible for 70 % of cases (Insans et al. 2013).

Reports from different parts of the world show that the numbers and types of ophthalmic fungi depend up on atmospheric air-spora and the presence of spore sources in the environment. Moreover, many common fungal isolates were identified as etiological agents of mycotic keratitis, and they include Aspergillus spp., Penicillium spp., Curvularia lunata, Cladosporium spp., Fusarium spp., Drechslera spicifera, Rhodotorula sp., Cylindrocarpon sp., Candida albicans, Alternaria alternata and Paecilomyce spp. Identification and diagnosis of these fungi by wide range of conventional and molecular techniques are currently available. Early diagnosis and appropriate treatment are essential to control the disease and avoiding blindness (Alqurashi, 2009).

This study was conducted to evaluate the frequency of positive fungal cultures in infectious keratitis, epidemiology of fungal keratitis and of the various fungal species identified as etiologic agents in patients suffering from fungal keratitis admitted to ophthalmology department, in different three hospitals in Riyadh.

100 patients (53 males and 47 females) of clinically suspected mycotic corneal ulcers admitted to ophthalmology department, in different three hospitals in Riyadh during the period of February 2013 to October 2013 (9 months), were subjected to this study. A detailed history of present illness was undertaken on all patients with special reference to age, occupation, trauma, medication to eye and surgical intervention, systemic diseases, and use of cosmetic or therapeutic contact lenses.

In all cases, corneal scrapings were aseptically collected directly from the base and margins of ulcers using with a tip of a disposable 23-gaugeneedle, after instillation of topical anesthetic (0.5% tetracaine). Direct microscopy was done under 10% KOH examination and lactophenol cotton blue mount. Also a sterile Dacron swab was used to obtain a corneal scrape from the base and leading edge of the corneal ulcer.

The specimens were cultured onto Sabouraud’s Dextrose agar (SDA) (HiMedia, Mumbai, India) plates supplemented with 0.05% (W/V) chloramphenicol in the form of C streaks; only growth occurring on the C streaks was considered to be significant. All the media were incubated at 37°C and 25°C for a period of four weeks. Although fungal growth is usually seen within three to four days, negative culture media may require incubation for up to four weeks. Cultures were checked every day during the first week and twice a week for the next three weeks. Any growth present on the medium was identified by standard laboratory techniques viz. the rate of growth, colony morphology, and microscopic appearances in lactophenol cotton blue mount and slide culture.

Chromogenic media contain chromogenic substrates which react with enzymes secreted by the target microorganisms to yield colonies of varying colures (Pfaller et al. 1996). CHROMagar Candida Differential agar (CHROMagar Company, Paris, France) is a selective and differential medium, which facilitates rapid isolation and presumptive identification of some yeasts from mixed cultures. The medium contained (g/L): agar 15; peptone 10.2; chromogenic mix 22; chloramphenicol 0.5; pH: 6.1. According to the manufacturer 47.7 grams of the powdered medium were slowly dispersed in 1 liter of sterile distilled water and brought to a boil by repeated heating until complete fusion of agar grains. The medium was cooled in a water bath to 45-50°C, with gentle stirring, then poured into sterile petri dishes and allowed to solidify. Separate colonies from all Candida isolates on SDA were subcultured onto CHROMagar Candida and incubated at 37ºC for 48 hr. Presumptive identification was done based on colony colour of the growing Candida strains. According to the manufacturer, C. albicans appears as green colored smooth colonies, C. tropicalis appears as metallic blue, C. krusei appears as pink fuzzy colonies, C. glabrata appears as mauve dark pink and C. parapsilosis appears as white pale pink.

Corneal trauma with stone chips and metal splinters appeared to be the most common predisposing factors in our study as it were observed in 16 (30.76%) patients with fungal keratitis, followed by ocular surgery and corneal disease that were recorded as predisposing factors in 14 cases (26.92%).Eight patients (15.38%) received topical antibiotics and corticosteroid. Seven patients (13.46%) had diabetes and also seven patients had a history of using contact lenses. (Table 2, Fig. 3)

Fig. 1. Distribution of fungal keratitis between male and female patients.

Table 1. Epidemiology of fungal Keratitis and identification after phenotyping.

Table 2. Summary of cases of fungal keratitis and percentage. 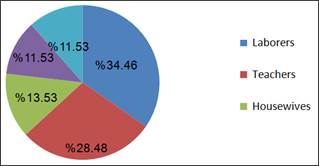 Fig. 2. Percentage of fungal Keratitis in patients according to their occupation. 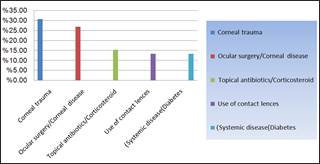 Mycotic keratitis is an important ophthalmic problem in all parts of the world, because it leads to corneal blindness and sometimes in loss of the eye. Various published reports indicate that mycotic keratitis account for 6% to 50% of all cases of ulcerative keratitis (Rosa, et al. 1994; Upadryay, et al. 1991 and Dunlop et al. 1994). In this study the percent of ulcerative keratitis was 52%. Males were significantly more frequently affected than females (69.23% and 30.76%, respectively). Fungal corneal ulcers may be reported at any age and in the present study, the age of the patients varied from 28 to 55 years. These results are nearly similar to those reported by Gopinathan et al. (2002) who found that the males were significantly more frequently affected than females (a ratio of 2.5:1). Also Kalshetti et al.(2015) found that from 40 patients only 24(60%) were males and 16(40%) were females. 64% of patients were in the age group 20 to 50 years (Tilak etal. 2009) whereas the highest prevalence rate of fungal keratitis was identified in the patients with 40 - 90 years age group according to Haghani et al.(2015).Chowdhary and Singh (2005) found that men (68%) were more commonly affected by fungal keratitis than women (32%). Also, Xie et al. (2006) found that fungal keratitis was more common in males (60.6%) than in females (39.4%). On the other hand, the results which were recorded by El-Sayed et al. (2010) revealed that fungal keratitis was more common in female (75%) than in male patients (25%).

Corneal trauma has been identified as the most common risk factor for mycotic keratitis, which was also the case in the present study. Stone chips and metal splinters were reported to be the most frequent traumatising agent in our series (16 cases). Other predisposing risk factors were ocular surgery and corneal diseases which were detected in 14 cases. Topical antibiotic/Corticosteroidusage in eight cases. Six cases gave the history of using contact lens and other six cases were diabetics. Results which were recorded by El-Sayed et al. (2010) revealed that the most common risk factors for fungal keratitis were contact lens use (50%), corneal trauma (50%), using of topical steroid (25%) and diabetes mellitus (25%).

Aspergillus flavus was the most prevalent species. (Haghani et al. 2015).

Indeed, the incidence of fungal keratitis has increased dramatically over the past 30 years, with some authors reporting up to17-44% of keratitis cases caused by fungi. The key element in the diagnosis of fungal keratitis is the clinical suspicion by ophthalmologists. Fungal corneal ulcer is common in Asia due to the tropical climate and a large population that is at risk. Various factors are involved, such as trauma and the injudicious use of topical antibiotics and corticosteroids. However, due to the potential serious complications from fungal keratitis, it is important to know the exact etiology of corneal ulcer to institute appropriate therapy in time.