Abstract: The study acylation reactions of dihydroquercetin apart from scientific interest has practical value. As a result of the reactions will form new organic compounds which may possess potential antioxidant, anti-inflammatory and cytotoxic activity [1]. Within this research studying of processes of acylation of a dihydroquercetin with use of benzoyl chloride and definition of chemical structure of new medicinal substances, as homogeneous samples of high degree of purity was the important and interesting point. One of the promising methods of studying the structure of drug substances is the method of IR spectroscopy. The method gives the chance to make an objective assessment of authenticity that allows to use actively it in the pharmaceutical analysis of many unknown connections [2-4]. It predetermined conduct of the compulsory registration of IR spectra for the original dihydroquercetin and synthesized on its basis of new substances with benzoyl chloride.

It should be noted that dihydroquercetin other than useful properties has a number of features some of which hinder its widespread use for practical purposes, in particular, it has poor water solubility.

Taking into account the told there was a need of studying of its chemical transformations including connected with giving to a molecule of bigger polarity. Its acylation of acid chloride of carbonic acids can become one of the directions of transformations of a dihydroquercetin.

Introduction to structure of the flavonoids presented dihydroquercetin, additional the pharmacophore groups is undoubtedly an actual task. As an acylating reagent was chosen acid chloride of benzoic acid.

The results of infrared spectroscopic studies synthesized in different molar parities of the compounds are presented in Table 1 and Figures 1, 2, 3, 4, 5.

The reference to the fundamental vibrational frequency are made on the basis of literary data of [3,6,10] and known features of chemical structure of a dihydroquercetin and benzoyl chloride. 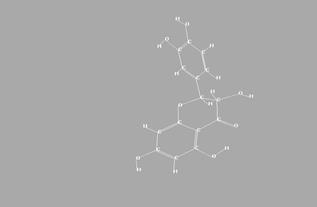 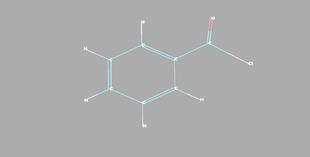 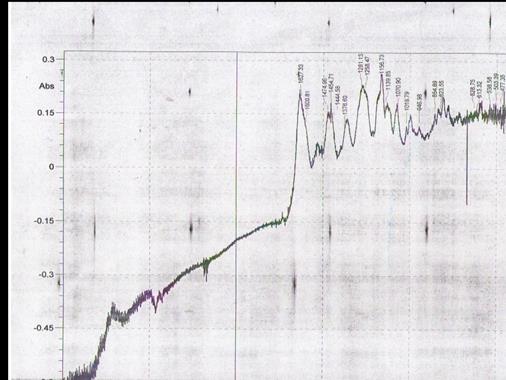 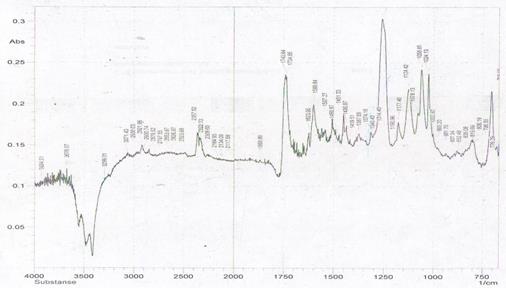 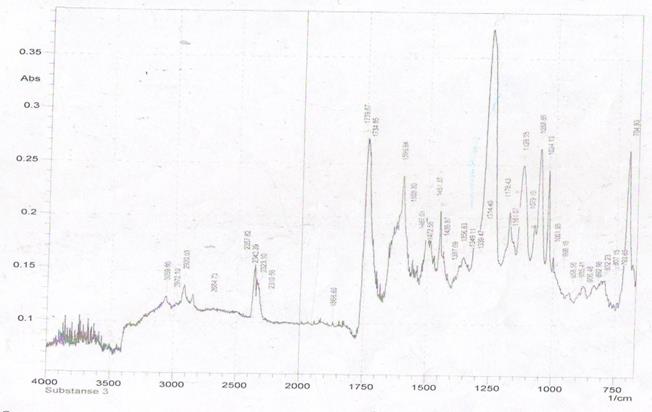 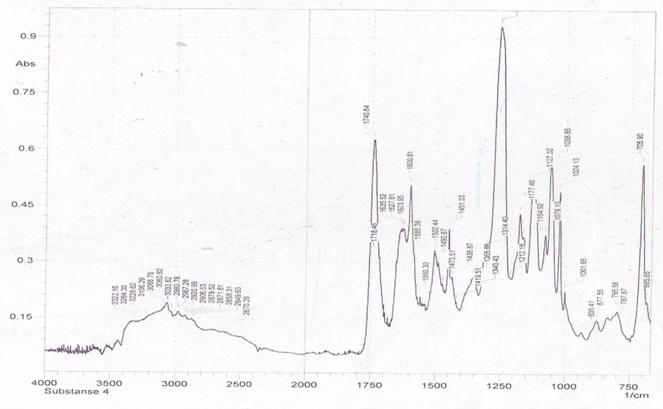 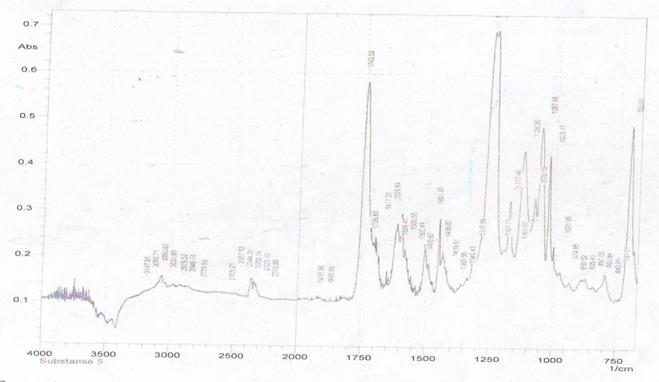 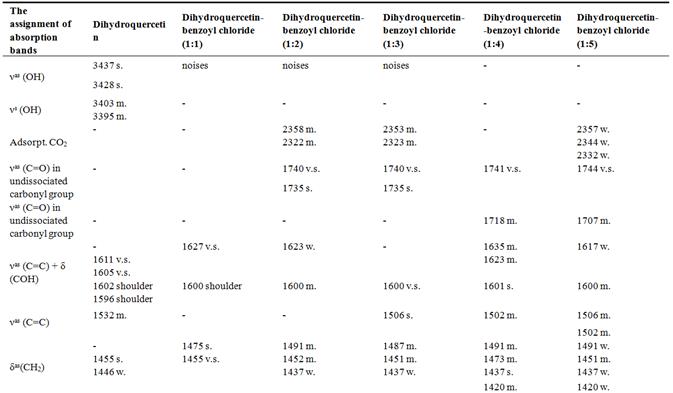 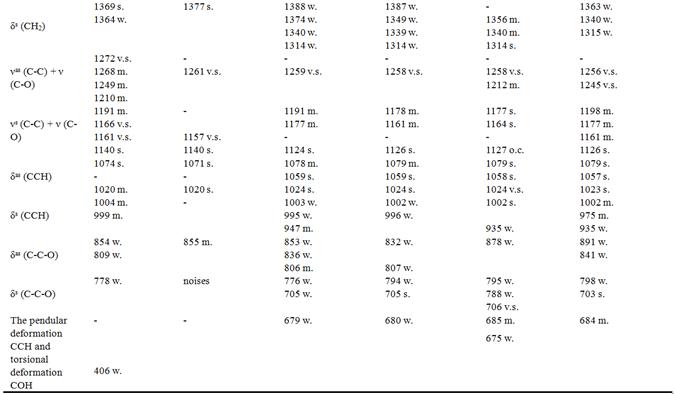 In the spectrum of the molecule dihydroquercetin absorption bands are observed with high intensity at 3437 and 3428 cm-1, which are assigned to the antisymmetric stretching vibrations of OH hydroxy group present in the molecule of the original substance. Respectively the absorption bands caused by vibrations of these groups include the bands at 3403 and 3395 cm-1, the intensity of which is somewhat lower. Proceeding from small structure and the provision of the considered strips, it is possible to note that hydroxyl groups in the studied molecules are involved in hydrogen communications as the free not associated hydroxyl group would have a narrow strip of absorption in the field of 3600-3580 cm-1. Deformation scissors fluctuations the СОН-groups are shown in more low-frequency area (̴1600 cm-1).

In ranges of new substances with various ratio of benzoyl chloride in them intensity of strips in the field of 3500-3200 cm-1 becomes much lower and in the majority of ranges of these connections absorption is shown generally at the level of noise. This allows to conclude that in the new substances hydroxyl groups as independent structural units do not exist; they are mainly involved in numerous intra and intermolecular interactions.

In the spectra some of new substances is observed absorption bands in the region of 2400-2300 cm-1 medium or low intensity. They are caused by vibrations antisymmetric linear physically adsorbed CO2 molecules.

Despite the presence in the chemical structure dihydroquercetin carbonyl group absorption band caused by its vibrations, absent in its spectrum. This indicates that the initial dihydroquercetin, which is located in associated state and the carbonyl group which is present there in, participates in intramolecular bonds. In the spectra of the compounds dihydroquercetin with benzoyl chloride, since the ratio of components of 1:2 are observed sufficiently high intensity narrow absorption band in the region of 1700-1750 cm-1, and are caused by anti-symmetric stretching vibrations of C=O in carboxyl groups, benzoyl chloride, which is an acid chloride of benzoic acid.

It should be noted that the number of absorption bands in this region with an increasing number molecules of benzoyl chloride in its substance dihydroquercetin gradually increases. All this testifies to the free carbonyl group and the gradual increase of its freedom.

In the spectra of the initial dihydroquercetin and its compounds with benzoyl chloride are observed high intensity and highly structured absorption bands in the region 1500-1640 cm-1. They are caused by the stretching vibrations of the C=C bonds in the aromatic rings dihydroquercetin and benzoyl chloride. Along with a stretching C=C bond these vibrations are not strictly stretching because they contribute changing of bond angles C-C=O. Identified the following consistent pattern: adherence to the molecule dihydroquercetin the benzoyl chloride leads to decrease in the number of bands in this area, which is most likely connected, with decreasing of degrees of freedom of the benzene ring by forming a new donor-acceptor bonds between the interacting components.

Asymmetric and symmetric deformational vibrations of ССН and СН2 groups in benzene rings investigated spectral structures are manifested in the 1300-1400 cm-1. Bands corresponding to these oscillations, sufficiently structured and have high strength. The number of bands in considered area does not depend on degree of association dihydroquercetin with benzoyl chloride.

Suffice highly structured band in the spectra of all the compounds are observed in the absorption region 1100-1270 cm-1. Their intensity is also quite high. They are caused by anti- and symmetric stretching vibrations of C-C- and C-O bonds of the core parts of the investigated compounds.

Blended platforms Scissor deformational vibrations of ССН groups and CCO are manifested in the spectra of all the compounds in the 700-1100 cm-1, and there are the pendular and torsional deformations of ССН- and COH groups in the region below 700 cm-1.

1.   Analysis of IR spectra of the dihydroquercetin and the new compounds with benzoyl chloride, which was prepared in various ratios, shows that they have a certain vibrational structure, indicating the presence of basic functional groups typical initial components.

2.   Changes in the positions the individual absorption bands are directly related to the donor-acceptor interaction between dihydroquercetin and benzoyl chloride.