Human form measurement data determines the minimum of the cab interior space, the size of the entrances and exits, the height of the seat, etc. The latter is the range of motion can be achieved of a driver’s trunk or limbs, it determines the position of the control in the cab, etc. In the design of econopower cars, if you want to make drivers would be able to finish the race, the first thing to consider is the human body size and scope of applicable people.

The measurement used some of the main body size:

Above head point: the point is located in the center of the body line at the top of the highest point.

Tip of the finger points: longest finger of average person, so choose the top of the middle finger.

Shoulder point: the starting point of arm and upper arm which located in the edge of shoulder.

Nipple point: used to determine the point of the chest height, its location is respectively in the human body chest around the top, it is better to recognize.

Cervical point: refers to the junction point of the central neck and back.

Elbow point: the most outstanding point when elbow bend, it is also the most salient points at the top of the ulna.

Umbilical point: the point which make sure the waist high, the center of the navel.

Knee point: the center of the knee.

Horizontal plane, divided the human body into two parts of upper and lower, all plane are vertical with coronal and sagittal, namely is parallel with the plane where location of sole.

Coronal, vertical axis and the horizontal axis two axis line in the plane, divides the body into before and after two parts, including all of the parallel plane.

This article selects the 36 static body dimension which human body required for parametric modeling and driving posture prediction simulation as quick photographic measurement research goal. According to the access method, the size are divided into two categories: 1) the size of the measured directly by measuring instrument; 2) the size of the measurement is obtained by photographic method. The corresponding measuring project code, classification and meanings are shown in table 1.

Create a new model of the human dimension that can be used to be model data file must follow a certain form. A crowd file contains four sections, using the four groups of key words:

CORR M( )—This section lists the numerical values of the correlation among the dimensions of the male parts.

CORR F( )—This section lists the numerical values of the correlation among the dimensions of the female parts.

The optional of "CORR" represent the body size dependency, it need to fill out the correlation coefficient between the dimension code and which correlation coefficient expressed the mutual dependence between the two variables, the optional of "CORR" is dispensable, it only affects the model accuracy. Among them, STDEV MEAN must be written in front of the CORR. The writing format is as follows: <variable 1><variable 2><correlation>.

It is simple to calculate the number of < variable ><average ><standard deviation>, through the excel built-in function will quickly obtains the corresponding mean and standard deviation. The difficulty lies in the optional of CORR. The correlation of each human body size, some correlation is very high and the other is relatively low.

At last, the MEANSTDEV and CORR data are recorded in the notepad file, and change the file property of txt to SWS format, and then named as A1.sws. In the CATIA tools drop-down menu, select options, in the options dialog box to customize the crowd column above the right click the "Add" button, selectA1.sws, the file will be read smoothly, the appropriate human model A1 will add to the list. After the success of the human body model file, we can establish the corresponding human model.

Upright posture: The testee lift up the head, head positioning through eye ear plane, eyes look straight ahead, relax the shoulders, arms drooping naturally, unbend the arms, palm toward the side of the body, fingers lightly attached on the side of the thigh, knee naturally unbend, put left and right foot heel together, separate the front end, make the feet represent 45 degree angle roughly and make the weight distribution in two feet. In order to make sure that the upright posture is correct, the testee should be make the heel, the buttocks and the back part contact with the same vertical lead.

Sitting posture: The testee sitting lift up the head in the plane that adjusted to the height of the fibular head and head positioning through eye ear plane, eyes look straight ahead, left and right thigh roughly parallel and knee flexion is a roughly rectangular, feet placed on the ground, hands on his lap gently. Make sure the correct posture that the testee's buttocks, back should be simultaneously on the same vertical lead. 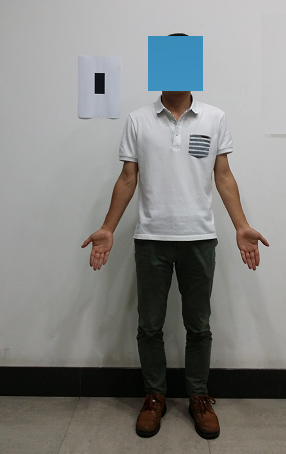 Using software of Coreldraw12.0 to measure body size on photos, according to the benchmarking scaling, through the recognition of the human dimension direct or indirect measure the size of various parts of the body, finally get the main body size.

The correlation coefficient of two parameters mainly by the following formula:

4. Application of the Human Body Model in the Interior Layout of the Econopower Car’s Driving Room

During the process of the frame design, for the purpose of reducing the fatigue level of driving and riding, the design must be meet the requirements of human comfort. To meet the frame and the human body attached to the sense of comfort, improve the driving comfort, the design of the frame must be accord with the principle of ergonomics, therefore, the frame design of econopower should not only have to be in good shape, but also make the shape curve to conform to the request ofergonomics. 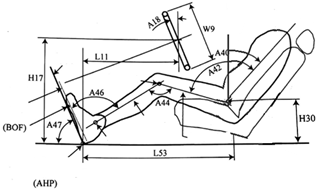 Fig. 2. The angle of of human body model. 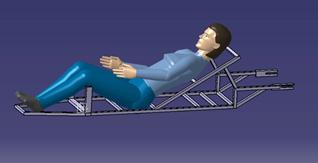 4.2. Application in Field of Vision

80% of information is obtained by the driver's vision when drive the econopower car, so the driver's visual channel is the most important traffic message channel, the human body model of econopower car driver have good evaluation effect on optimization design of driver's field vision. The driver's vision can be summarized as front view, the car's visual field, rear view and both sides of the visual field. Front view of the driver mainly includes the observation of the front road and the observation of various control instruments and other related field of view.

Eyellipse is origin benchmark of econopower car vision performance, also is a major tool of econopower ergonomics design, through the analysis on the driver front view can judge whether the automobile design is reasonable, otherwise it will obtain optimization.

4.3. Application in the Control Interface

An important principle in the design of the econopower body is the position of all manual operation button, rod, switch should be in the driver's hand reach envelopes. Driver's hand reach envelopes is refers to the driver in a normal position to sit in the seat, his right foot supporting on the accelerator pedal heel points, one hand holding the steering wheel and the other hand can reach maximum spatial contour surface.

Based on the human dimensions of Chinese adults data to update, obtain the more accurate anthropometric data, and then calculate the data of average value and standard deviation, will get a econopower car body size of the driver file, import it into CATIA. Then it will be shown in the New Mankin tab to display the establishment of the driver of the human model in CATIA, and then analyse the application on the frame,econopower car vision and the control interface.