Cardiac arrhythmias are disturbances in heart rhythm, manifested by irregular or abnormally fast rates (tachycardias) or abnormally slow rates (bradycardias). Patients with such abnormalities frequently observe palpitations, which is described as a sensation of ‘my heart turning over in my chest’, or being aware of their hearts beating rapidly/slowly. Other symptoms are weakness, light headedness, shortness of breath, dizziness, fainting (syncope) and occasionally, chest pain. Symptoms are severe when rate is faster, ventricular function is worse, or arrhythmia is linked to autonomic tone abnormalities. But, many arrhythmia patients report no symptoms, with the condition being discovered during routine check-ups. A rapid and long tachyarrhythmia can produce cardiomyopathy and congestive heart failure. In such cases, arrhythmia treatment ensures normal function of ventricles.

Though arrhythmia’s physical signs help physician make correct diagnosis, electrocardiography is standard method used tor recognizing cardiac arrhythmias. A prolonged electrocardiographic recording, often called a ‘Holter monitor’, or an event recorder that the patient activates when sensing an abnormality, may assist in confirming the diagnosis when the arrhythmia occurs sporadically, as is often the case [1].

Classification of ECGs into different disease categories is a complex pattern recognition task. However, the analysis of ECG signals is the most effective available method to diagnose cardiac arrhythmias [2]. Many methods are proposed for ECG signals classification. Research presented in [3]-[8] are among the recently published works. The method in [3] is based on Fisher Linear discriminant where RR interval duration and distance between occurrence of P and T waves is perceived. Fisher’s Linear Discriminant is applied using these features. In [4] a SVM-based method for PVC arrhythmia detection is seen as more efficient than Anfis. In [5] a new approach for feature selection and classification of cardiac arrhythmias based on PSO-SVM is proposed. [6] Describes a neuro-fuzzy approach to ECG-based heart rhythms classification where Hermite polynomials characterize QRS complex signals whose coefficients feed neuro-fuzzy classifier. Arrhythmia detection by Independent Component Analysis (ICA) and Wavelet transform proposes to extract important features in [7]. Finally, in [8], authors present an approach to classify beats of a large dataset by training a Neural Network (NN) classifier using wavelet/timing features. The authors found that fourth scale of a dyadic wavelet transform with a quadratic spline wavelet together with the pre/post RR-interval ratio is effective in distinguishing the normal and PVC beats from others.

Machine learning algorithms note data changes adapting its design to accommodate new findings. It is applied in ECG classification with most works being based on NN [9,10], Markov chain model [11] and Support Vector Machine (SVM) [12]. The Wavelets [13] and morphology [14] based methods are common feature extraction techniques.

Artificial Neural Network (ANN) is used as a base in computer based diagnostic systems to design structural designs. Improved ANN techniques like data reduction and feature extraction are presented in literature [15,16]. MLP can recognize /classify ECG signals better than other ANN methods.

Neural networks are classification tools with research proving they are alternatives to conventional classification. Their advantages include being self-adaptive and data driven and adjusting to data without functional specification/distributional form. They accurately approximate functions. Classification requires intra group member’s functional relationships, and object attributes for accurate function identification. NN are nonlinear and flexible in modelling real world complex relationships while NN estimates posterior probabilities to provide classification rule establishment and provide a base for statistical analysis.

NN are based on numeric optimization from the gradient descent method. By using different optimization methods such as PSO, GA etc., various algorithms have been established for training of NN. The inclusion of momentum leads to improvement in the presentation of gradient descent, and presents a second parameter μ, additionally to that of the learning rate parameter η.

An arrhythmia Beat Classification using Pruned Fuzzy K-Nearest Neighbor (PFKNN) Classifier was proposed by Arif, et al., [18]. This PFKNN classifier was used to classify various arrhythmia types and different beats presented in MIT-BIH Arrhythmia database. The classifier was tested on ~103100 beats for six beat types presented in database. It achieved 97% beat classification accuracy and geometric sensitivity mean was 94.5% with 19% of total training examples. Accuracy/sensitivity was comparable to FKNN when all training data was used.

An arrhythmias Classification with MLP NN and Statistical Analysis was proposed by Raut and Dudul [19] which presented a classification system for cardiac arrhythmias using ANN with back propagation algorithm. The work concluded that the proposed MLPNN classifier estimated complex decision boundaries correctly had remarkable discriminating ability and outperformed statistical discriminant analysis and classification tree rule based prediction.

The Arrhythmia database of MIT-BIH contains 48 half hour recordings of two channel ambulatory ECG from 47 subjects in 1975 and 1979 by Boston’s Beth-Israel Hospital Arrhythmia Laboratory. Twenty-four hour ambulatory ECG recordings were collected from a 4000 mixed population having inpatients (60%) and outpatients (40%). Recordings were digitized at 360 samples per second per channel with 11-bit resolution over a 10mV range. Two or more cardiologists annotated each record independently; a consensus was taken to get computer-readable reference annotations for all beats [27].

ECGs are inexpensive and non-invasive means to observe the heart’s physiology. In 1961, Holter introduced techniques for continuous ECG recording for ambulatory subjects over many hours; long-term ECG (Holter recording) with 24 hours duration is the standard technique for observing transient cardiac electrical activity aspects. From mid-1970s, cardiac rhythm abnormalities (arrhythmias) are reflected in long-term ECGs and automated methods to identify arrhythmias was used. Though recordings are plentiful, access to data is not, and recorded waveforms thorough characterization is tedious and expensive. Further, there is a wide variability in ECG rhythms and waveform morphology details, both between subjects and within individuals over time. Hence, a representative collection of long-term ECGs for research must have many recordings [28].

R-R intervals in ECG are extracted using Symlet, and the extracted features are reduced using symmetric uncertainty in the proposed method. Features are classified as normal beats, LBBB and RBBB using proposed Fuzzy neural network. GA optimized learning rate and momentum. Various techniques used in the methodology are detailed in this section.

To determine an ECG signal’s RR- interval, R-waves should be detected in obtained ECG signal. As R-waves have largest amplitudes among waves it is easily detected. Specific detail components of decomposed signals are kept to detect R waves and other low frequency/ high frequency components are removed. 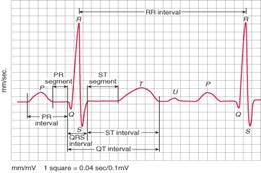 Wavelets are waveforms bound in both frequency and time. Wavelet analysis splits the signal into shifted and scaled versions of the original (or mother) wavelet. The Continuous Wavelet Transform (CWT) is given by the wavelet function ψ by adding all time of the signal multiplied by scaled, shifted versions. Mathematically the continuous wavelet is defined by

Many wavelet C coefficients are scale and position function due to CWT. The original signal’s constituent wavelets are got through multiplying a coefficient by applicable scaled/shifted wavelet. Daubechies proposed symlets are symmetrical wavelets. Symlets are db family modifications. Both wavelet families are similar with difference of db wavelets having maximal phase whereas symlets have minimal phase. Symlets are compactly supported with slight asymmetry. Wavelet coefficient for symlet is any positive even number and highest number of vanishing moments for a specific support width [30].

Another method of feature selection is choosing features with highest symmetric uncertainty (SU) values between feature and target classes [31]. To locate this indicator, feature values for zero mean and unit variance are first normalized by

where P(wj) is prior probability of class of

is distribution of kth feature, and,

where entropy of variable X is found by

PCA identifies data patterns, expressing them to highlight similarities and differences. As data patterns are hard to find for high dimension data, where graphical representation is unavailable, PCA is a powerful tool for data analysis. The other PCA advantage is that once a data pattern is located it is compressed, i.e. by reducing dimensions number without information loss [33].

Let A be an n X n matrix. Eigenvalues of A are defined as roots of:

Let λ be Eigen value of A. There exists a vector x so that:

Vector x is called eigenvector of A associated with Eigen value

An Artificial Neural Network (ANN) is a mathematical/computational model attempting to imitate biological neural networks structure and functionality. It is composed of a set of simple, highly interconnected computational units called nodes, each representing a biological neuron [35]. In a NN, hidden units receive a weighted inputs sum applying an activation function to it. Then, output units receive a weighted hidden unit’s output sum and apply an activation function to it. Information is passed from one layer to another. The network is called a Multi-Layer Perceptron Neural Network, with specific characteristics. To easily explain MLP neural network structure, Figure 1 reveals main components. It has an input layer representing input variables to be used in NN model and can be connected with output layer directly. It has i hidden layers with each layer containing j hidden units.

GA is an optimization technique trying to replicate natural evolution where individuals with best characteristics adapting to the environment are likely to reproduce and survive. Such advantageous individuals mate among themselves and produce offspring with similar characteristics thereby preserving favourable characteristics while those unfavourable are destroyed, leading to species progressive evolution.

GA iterates and evolves a population forming a new population at every step. GA iteration includes the following steps:

4. Replacement: In this last step, old population individuals are removed and replaced by new ones [36].

Five genetic operators change MLP. In addition to mutation percentage and number of crossing points, each operator’s application priority has to indicate number of individuals generated by genetic operators. Tests are undertaken using higher priority for mutation and similar levels for remaining operators.

Mutation operators modify weights of specific neurons randomly, depending on application rate. The operator is used with 40% application probability, that is, 40% of weights are changed, which obtained better results empirically than lower probabilities.

The additional operator, attempts to solve a main BP issue and its variants: difficulty in guessing hidden layer neurons number. This operator has to perform incremental learning starting with a small structure and its increments, adding new hidden units, if necessary. Simultaneously, it raises the dilemma of over fitting: small networks generalize well, but are slow learners, whereas big networks learn fast, but generalize badly.

Elimination operator eliminates a hidden neuron randomly. This operator has to perform decremental learning: it prunes certain nodes for better results in generalization and a smaller network [37].

Flowchart of the proposed method: 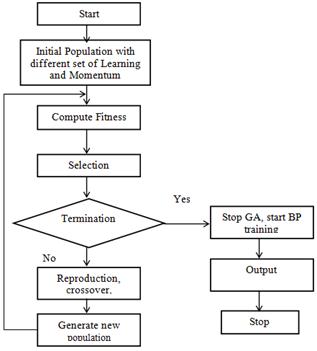 In this study, Optimization of Multi-layer perceptron neural network using genetic algorithm for classifying ECG arrhythmia is proposed. Symlet extracts RR intervals from ECG data as features while symmetric uncertainty ensures feature reduction. GA is used to optimize learning rate and momentum. The results obtained are as shown in figure 6 to 10.Table1 tabulates the result summary for various techniques. 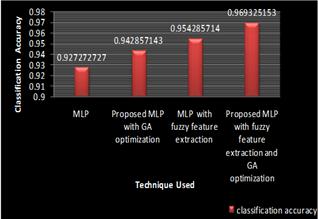 From figure 6, it is shown that the proposed MLP with fuzzy feature extraction and GA optimization has the high classification accuracy value as 0.9693. 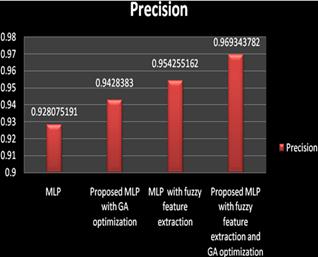 From figure 7, it is shown that the proposed MLP with fuzzy feature extraction and GA optimization has the high average precision value as 0.969344. 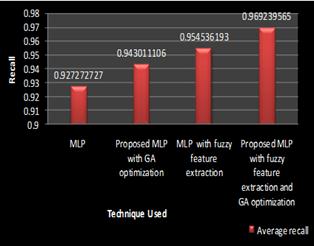 From figure 8, it is shown that the proposed MLP with fuzzy feature extraction and GA optimization has the high average recall value as 0.96924. 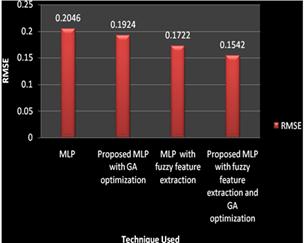 The root mean square error of the proposed MLP with fuzzy feature extraction and GA optimization decreases to 0.1542.

Table 2. The comparative results of different approaches to best fitness.

From figure 10, it is shown that the proposed MLP with fuzzy feature extraction and GA optimization has best fitness function compared to other methods.