Abstract: Garlic extract in water, supplemented with copper, exerts an enhanced anti-proliferative and a caspase-independent apoptotic activity in a human hepatocarcinoma HepG2 cancer cell line. Furthermore, a DNA double strand break downstream, likely responsible for the observed cell death in HepG2 cell, was evidenced by an early over expression of p53 and p21. This observed synergistic antiproliferative and antitumor capability of water garlic extract, in the presence of copper, might be useful as new tool in cancer prevention and therapy.

Although the chemistry of garlic is quite complex, it is well known that this plant contains organosulfur compounds (OSCs) as precursors of the bioactive products [1]. These bioactive products are not present in intact plant, but they are released upon various methods of extraction of garlic in oil or water solvents [2, 3]. These OSCs may act exerting their effect on various diseases [4]. The antioxidant activity of water garlic extracts (WGEs) may be related to the elevated content in OSCs and selenium compounds [5] but the specific phytocompounds involved in the anti-inflammatory and antineoplastic activities are yet unknown [6]. Garlic and its water extracts have shown a clear medicinal role in humans, like antimicrobial, hypoglycemic, lipid-lowering and anticancer properties [7]. Many sulfur-containing bioactive compounds were identified in garlic over the years, with a protective effect against several types of cancer [8].

Copper (Cu) is required for the catalysis of several enzymes [9] and it is a trace element with physiological functions. WGE in the presence of Cu (WGE-Cu), has evidenced an enhanced antitumor activity in an in vitro experimental culture of HepG2, human hepatocarcinoma cells. Furthermore, a DNA double strand break downstream, likely responsible for the observed cell death in WGE-Cu-treated HepG2 cells, was confirmed by the over expression of p53 and p21. These findings give support to the potential use of WGE-Cu for cancer prevention and therapy.

Local garlic producers provided garlic bulbs, harvested from the end of July. Complete steps on preparation of water garlic extracts (WGE) are reported in patent n° RM2008A00008 (registered 2008-14-02). WGE was divided in aliquots, stored at –20°C and sterilized by a 0.2 mm cellulose membrane before use. 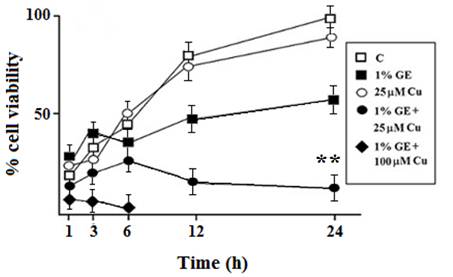 Briefly, after treatment with various concentrations of WGE-Cu, at 1, 3, 6, 12 and 24 h, cells were collected and washed with PBS, resuspended in a binding buffer, and stained with Annexin V-FITC and propidium iodide (PI) for 15 min at room temperature in the dark, prior to the addition of binding buffer. Flow cytometry analyses were performed with Cytomics FC 500 (Beckman Coulter, Brea, CA, 16 22686 USA). In each sample, 10,000 cells were sorted. The data were analyzed by using CXP Software (Beckman Coulter, Inc., Fullerton, CA, USA).

The results were presented as the mean values ± SDs of three independent experiments. Student's t test was used for comparisons between two groups, and an ANOVA with a post hoc test was used for multiple comparisons. These statistical analyses were performed using SPSS software, version 16.0 (IBM Corp., Armonk, NY, USA). The value indicating significant differences was set at p < 0.05.

A HepG2 cell medium with final concentration of 25 mmol/L Cu, together with 1% (v/v) WGE, showed a remarkable cytostatic activity at 6 h of incubation respect to the control (Figure 1). On the contrary, an evident cytotoxic activity was observed keeping WGE at 1%, but with higher concentration of Cu (100 mmol/L). A cell viability decrease of 79% was observed in WGE (1%)-Cu(25 mmol/L)-treated HepG2 after 12 h of incubation, reaching a value of 86% reduction at 24 h of treatment (Figure 1).

In order to determine whether 1% WGE-25mmol/L Cu induced apoptosis in HepG2 cells, we used flow cytometry with a FITC Annexin V apoptosis detection kit 1. The results showed that after 1% WGE-25mmol/L Cu treatment for 6 h, the percentage of early and late apoptosis in cancer cells was significantly higher (Figure 3C) than that in the control (data not shown) and 1% WGE- or 25mmol/L Cu-treated cells (Figures 2A and B). The percentage of apoptosis reaches a 45% value upon 24 h of incubation with WGE-Cu. The results were consistent with the change in number and viability of treated HepG2 cells reported in Figure 1.

Figure 3 shows the result of Western blot analysis of the expression of p53, observed upon WGE-Cu treatment of HepG2 cells. High level of expression of p53 normally responds to DNA damage and activates cell cycle arrest and apoptosis. As shown in Figure 3, HepG2 cell treated with 1% WGE-25 µmol/L Cu at several times, had a p53 immunoreactive band rapidly increased already at 30 min, and remained over expressed until 24 h of treatment. In order to collect more evidences on the possibility that cell death of HepG2 cells is induced by WGE-Cu treatment, we analyzed the expression levels of a cyclin dependent kinase inhibitor, p21, the p53 downstream factor. Figure 3 shows a similar trend of induction of p21, as previously observed for p53.

Figure 3. WGE-Cu treatment induces expression of DNA damage-related proteins, p53 and p21. HepG2 were treated with 1% (v/v) WGE-Cu 25 mmol/L at several times. Lysate proteins of untreated HepG2 cells were used as a control (C). Catalase was used as loading control. Immunoblots are from one experiment representative of three that gave similar results.

Apoptosis inducing factor (AIF) has been proposed to act as a putative reactive oxygen species scavenger in mitochondria. When apoptotic cell death is triggered, AIF translocates to the nucleus, where it leads to nuclear chromatin condensation and large-scale DNA fragmentation which result in caspase-independent HepG2 death [11]. We performed this study to investigate the possibility that, AIF induced death could be a cause of WGE-Cu treatment of HepG2 cells. We have found that AIF immunoreactivity was increased in nuclear fractions of WGE-Cu-treated HepG2 cells at the early stage of treatment (Figure 4). The results of this study imply the existence of a caspase-independent apoptosis occurring under our experimental conditions. 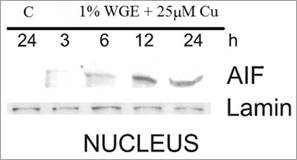 Figure 4. WGE-Cu treatment induces nuclear translocation of AIF. Western blot analyses of apoptosis inducing factor (AIF) translocated in the nuclear compartment as soon as after 6 h of treatment with 1% (v/v) WGE-Cu 25 mmol/L at several times, suggesting the existence of a caspase-independent apoptosis occurring under our experimental conditions.. Nucleus lysate proteins of untreated HepG2 cells were used as a control (C). Lamin was used as loading control. Immunoblots are from one experiment representative of three that gave similar results.

derivatives as potential natural remedies. The anticancer effect of garlic is mainly associated with its OSCs [12]. OSCs can inhibit cell-cycle progression, DNA adduct formation and angiogenesis, inducing apoptosis and histone modification [13]. Oxidative stress represents an uncontrolled generation of ROS in the cells with a number of damages to biological macromolecules with consequent diseases. Several molecules introduced with the diet, directly participate to counteract oxidative damages providing a protection to the organism.

The role of foods and dietary phytochemicals in prevention and treatments of cancer has been extensively discussed [14]. At high concentrations, phytochemicals present in WGE may act as pro-oxidants showing a pro-apoptotic action [15]. For the water-soluble constituents of WGE such as S-allylcysteine (SAC) and S-allyl mercaptocysteine (SAMC), limited experimental studies also suggested that both water-soluble compounds can suppress cancer risk and alter the biological behaviors of various human tumors such as breast, prostate, bladder and colorectal cancers [16-19].

We report in this work that a relatively low concentration of WGE (1% v/v) supplemented with Cu (25 µmol/L) enhances arrest of cell proliferation and induction of a caspase- independent apoptosis. It appears that the combined WGE-Cu treatment causes a remarkable cell death through a synergistic and specific action of the WGE with Cu, in HepG2 carcinoma cell line. A possible DNA double strand break downstream likely responsible for the observed cell death in HepG2 cell, was evidenced by the increased expression of p53 and p21 in WGE-Cu-treated HepG2 cells. It is well known that p53 plays a critical role in the induction of apoptosis, autophagy and cell cycle arrest and stimulated the transcription of different genes including p21, which is one of the cyclin-dependent kinase (CDK) inhibitors. The induction of p21 resultes in CDK inhibition and cell cycle arrest, preventing the replication of damaged DNA [20].

These findings support the continued investigation of OSCs as alternative agents in the chemoprevention and chemotherapy of cancer.

Current conventional chemotherapy treatments are very expensive, toxic and less effective in the majority cancer treatment. Plant-derived active components have been gaining more attention for their anticancer activities. Over the last 25 years, many anticancer drugs introduced are natural products or can be traced back to a natural product source. Many different health benefits have been ascribed to garlic for its diverse OSCs, and the anticarcinogenic actions of garlic have been reported by numerous epidemiological, clinical and preclinical studies. At the same time, the use of garlic as the complementary and alternative medicine (CAM) by patients who are diagnosed with cancers is increasing. The evidences reported in our work provide additional support to the possibility that a combination of WGE and Cu, could have a potential application in the treatment of various type of cancer.

Angelo De Martino proposed the project and carried out most of the biochemical experiments; Alberto Siciliano and Anna Shevchenko carried out most parts of the experiments; Piera Torricelli responsible of molecular biology data; Hannan Mahmoud Abu-Zeid contributed to botanical data analysis and interpretation; Simone Beninati contributed to concept, acquisition, interpretation of data and revision of the manuscript.