Abstract: Structural and morphological properties of vanadium oxides (V2O5) nanoparticles have been studied. V2O5 nanoparticles were synthesized using a simple chemical method by sodium metavanadate as precursor and Cetyltrimethylammonium bromide (CTAB) as surfactant. The samples were characterized by high resolution transmission electron microscopy (HRTEM), field effect scanning electron microscopy (FESEM) and X-ray diffraction (XRD). As there are many forms of vanadium oxides produced during this process, x-ray diffraction (XRD) technique was used to identify V2O5 phase. The size of as-prepared nanoparticles was around 5 nm as estimated by HRTEM technique and average diameter of annealed one was around 9 nm. The surface morphological studies from SEM depicted the formation of nanorods after annealing process. The effect of CTAB surfactant on the particle morphology was also studied and the results show that the size of particles reduce to 10 nm in presence of CTAB surfactant. FTIR spectrum shows the presence of V-O and V-O-V stretching mode of V2O5. The UV–vis absorption show the small band gap is found to be 2.20 eV.

Nanotechnology has large potential benefits to a range of areas. Nanomaterials have the potential to improve the environment through the development of new solutions to environmental problems. Nanotechniques have been touted as a new technology that may surpass the physical and chemical limitations of materials made from microparticles. Vanadium oxides constitute an important class of materials employed in different technological applications, and present a fascinating and broad range of chemical and physical properties resulting from the various metal oxidation states (from +II to +V) and the different V-O coordination geometries. Vanadium oxygen systems (V2O5, VO2) are prototype strongly-correlated materials that have been widely-studied by theoretical and experimental condensed-matter and materials community for more than half a century [1, 2]. Vanadium oxide is a well-known catalyst among various metal oxides [3], and so many fundamental studies have been developed wide-spreadingly centering around catalytic oxidation [4, 5]. They show metal-semiconductor transition, which implies an abrupt change in optical and electrical properties [6]. That is why this oxide is used in thermal sensing and switching. Vanadium pentoxide based materials are known to display several types of chromogenic effects [7], as a window for solar cells [8] and for transmittance modulation in smart windows with potential applications in architecture, automotives and nanomedicine [9]. It shows an atypical behavior because it cannot be defined exactly either as a cathodically or as anodically coloring material. V2O5 exhibit multi-colored electrochromism allowing the use in electrochromic displays color filters and other optical devices [1,10]. Transition metal oxides have been a subject of research in recent years in view of their fundamental and technological aspects. Among these, vanadium creates many compounds with oxygen; these have different structural, optical and chemical properties. Meaningful differences between the properties of different phases of vanadium oxides like VO, VO2, V2O3 and V2O5 depend on their structure, which determines other properties [11, 12]. Different forms of vanadium oxides can be obtained by changing the deposition process parameters, or by post-process treatment, e.g., additional annealing [13]. From the application point of view, the most interesting vanadium oxides are VO2 and V2O5. Vanadium dioxide is a very good candidate for thermochromic coatings due to the change of properties from semiconducting to semimetal at 68°C. Vanadium pentoxide (V2O5) is a thermodynamically stable form which exhibits electrochromic properties. V2O5 thin films can also be used in optical filters, reflectance mirrors, smart windows and surfaces with tunable emittance for temperature control of space vehicles [14]. It can be received by selecting deposition parameters or by the annealing of VO2 above 350°C [15]. The main synthetic route to vanadiumoxides by wet chemical methods is the sol-gel process, generally starting from a vanadyl alkoxide, or from vanadates,vanadic acid or vanadium oxychloride. These commercialsol-gel precursors contain vanadium centres in the+V formal oxidation state, requiring chemical reduction stepsfor the preparation of the lower valence oxides. The sol-gelprocess provides oxides with different structures, morphologies, stoichiometries, crystallinity degrees and particle sizes when a suitable choice of precursor and synthetic conditionsis made. In this article, vanadium oxide nanoparticlesare fabricated by using sol-gel method. Structural and surface morphological properties are discussed by XRD, HRTEM, UV-vis and FESEM analyses.

Vanadium oxide nanoparticles were synthesized by a new synthesis according to the following manner. Firstly, 0.6 g sodium metavanadate was completely dissolved in 100 mL pure water with stirring at room temperature. Ammonium chloride (1 g) was then added to the solution until dissolve completely. The color of solution changed from muddy color to transparent color which after a few minutes changed to fuggy color. After 5 min, 1 g, Cetyltrimethylammonium bromide (CTAB) was added to the solution and synthesis temperature was increased to 85°C. The color of solution changed from orange color to dark brown color. The Ph was between 6 and 7 during the synthesis. After one hour, the color of solution changed to transparent yellow color. The product were evaporated for 2 hours, cooled to room temperature and finally calcined at 600°C for 4 hours. All analyses were done for samples without any washing and more purification. The specification of the size, structure and optical properties of the as-synthesis and annealed vanadium oxide nanoparticles were carried out. X-ray diffractometer (XRD) was used to identify the crystalline phase and to estimate the crystalline size. The XRD pattern were recorded with 2θ in the range of 4-85° with type X-Pert Pro MPD, Cu-Kα: λ= 1.54 Å. The morphology was characterized by field emission scanning electron microscopy (SEM) with type KYKY-EM3200, 25 kV and transmission electron microscopy (TEM) with type Zeiss EM-900, 80 kV. All the measurements were carried out at room temperature.

X-ray diffraction (XRD) at 40Kv was used to identify crystalline phases and to estimate the crystalline sizes. Figure 1(a) shows the XRD pattern of aluminium oxide before annealing. Figure 1(b) shows the X-ray diffraction patterns of the powder after heat treatment at 600°C for 4 hours. The XRD patterns showed this sample have sharp peaks 2θ angle at the peak position at 25.2°, 32°, 33.5°, 37.5°, 45° and 51° with (101), (400), (011), (301), (411) and (002) diffraction planes, respectively are in accordance rhombohedral structure of the V2O5 phase. The mean size of the ordered V2O5 nanoparticles has been estimated from full width at half maximum (FWHM) and Debye-Sherrer formula according to equation the following:

where, 0.89 is the shape factor, λ is the x-ray wavelength, B is the line broadening at half the maximum intensity (FWHM) in radians, and θ is the Bragg angle. The mean size annealed V2O5 nanoparticles was around 9 nm from this Debye-Sherrer equation. 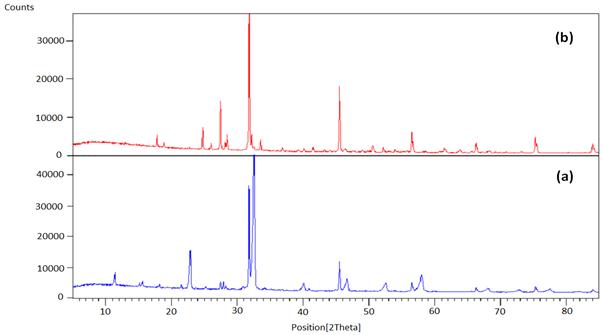 Figure 1. XRD patterns of (a) as-synthesized and (b) annealed V2O5 nanoparticles at 600°C.

SEM analysis was used for the morphological study of nanoparticles of V2O5 samples. These analyses show that the nanoparticles are appeared in the samples by increasing annealing temperature. Figure 2(a) shows the SEM image of the as-prepared V2O5 grains with formation of clusters. Figure 2(b) shows the SEM image of the annealed V2O5 nanorod at 600°C for 4 hours. The smallest diameter of V2O5 samples formed was about 9 nm. 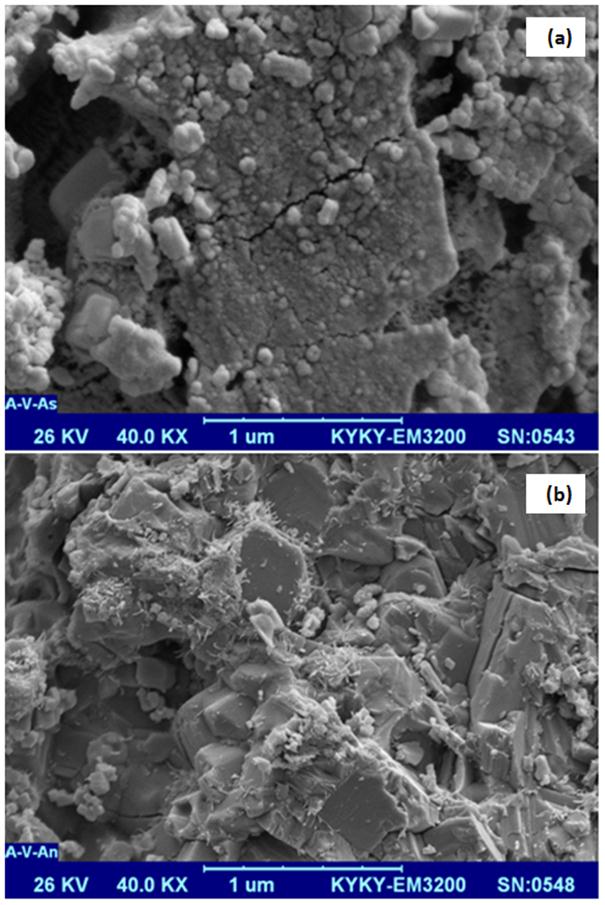 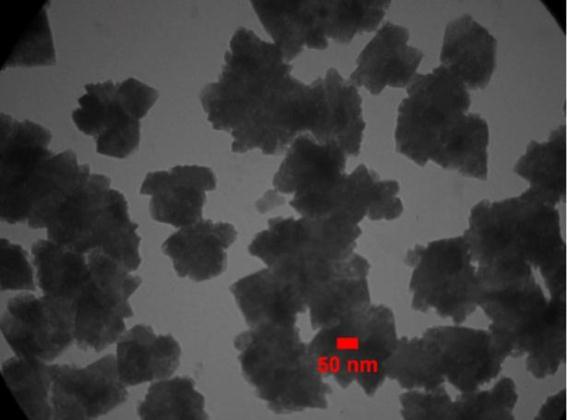 According to figure 4, the infrared spectrum (FTIR) of the synthesized V2O5 nanoparticles was in the range of 400-4000 cm-1 wave-number which identifies the chemical bonds as well as functional groups in the compound. The large broad band at 3135 cm-1 and 3037 cm-1 are ascribed to the O-H and C-H groups. The absorption picks around 1401 cm-1is due to the bending vibration of C=C vibration. FTIR spectra of V2O5 nanoparticles exhibited three characteristic vibration modes: V=O vibrations at 967 cm-1, the V-O-V symmetric stretch around 531 cm-1 and the V-O-V asymmetric stretch at 730 cm-1. As clearly seen, the bands appearing, between 950 cm-1 and 1020 cm-1 were assigned to a stretching mode (δ V-O). Bands between 700 cm-1 and 900 cm-1were ascribed to the bridging V-O-V stretching. 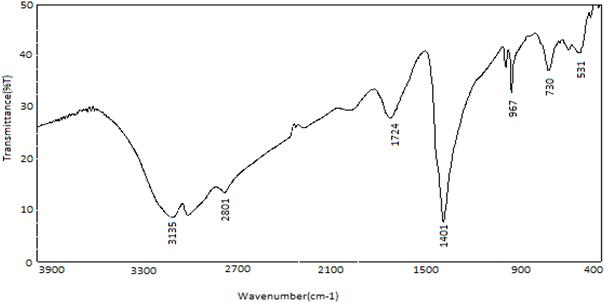 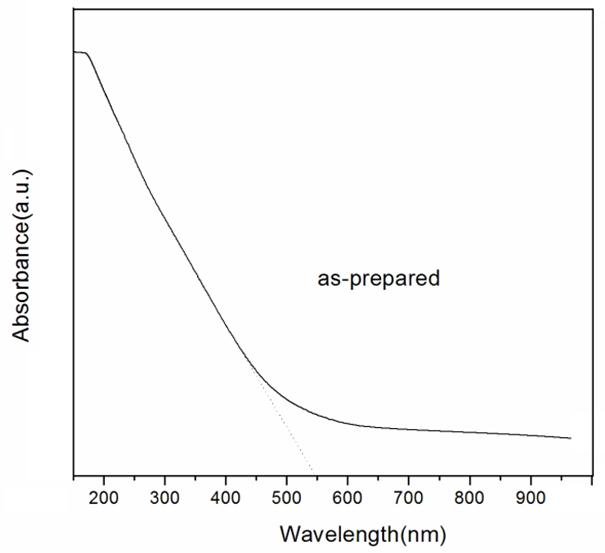 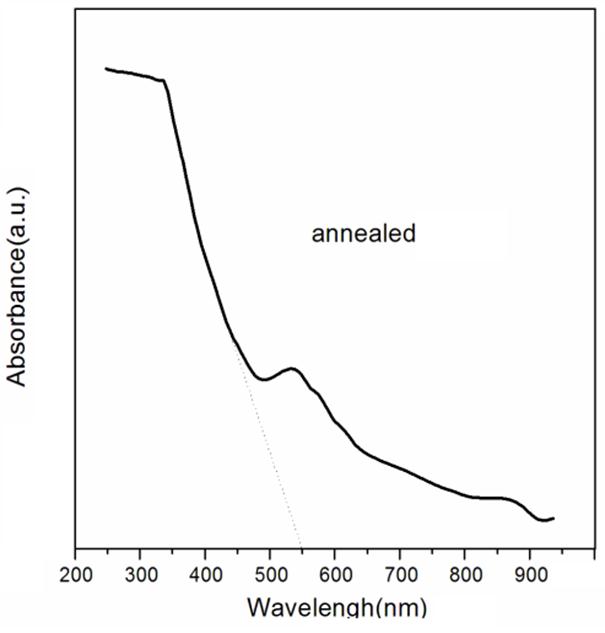 Novel vanadium oxide nanorods were successfully prepared using sodium metavanadate as precursor and CTAB as surfactant. XRD spectrum shows rhombohedral structure of V2O5 annealed at 600°C. From SEM images, it is clear that with increasing temperature the morphology of the particles changes to nanorod shaped and the size of particles decrees to 9 nm. TEM image exhibits that the uniform as-synthesized V2O5 nanoparticles prepared by sol-gel route with an average diameter about 5 nm. Finally FTIR spectrum shows the presence of V-O and V-O-V stretching mode of V2O5. The UV–vis absorption show the small band gap is found to be 2.20 eV.

The authors are thankful for the financial support of varamin pishva branch at Islamic Azad University for analysis and the discussions on the results.