Abstract: The study was aimed to investigate soil organic carbon (SOC) and total nitrogen (TN) dynamics among different land use systems in the Essera district of Dawuro zone, southwestern Ethiopia. Landscape of the district was dominantly covered with enset (Ensete ventricosum) farming system. For this study, three representative land use types namely, Enset farm, woody and cultivated lands were considered. For each land uses, a plot of 25x25m size was marked as a sample plot to collect soil samples in an‘X’ design (from the middle and four corners of the plot). Accordingly, both composite and core sampled soils were gathered from the five subsequent soil depths (i.e.0-5, 5-10, 10-15, 15-20 and 20-25cm). Consequently, analysis of variance was conducted by using SAS version 9.2. Moreover, a mean separation for each parameter was made using LSD (Least Significant Difference) test. The result confirmed that soil organic carbon (SOC) and total nitrogen (TN) stocks were significantly influenced by topographic variation, land use types and soil depths. The highest SOC and TN stocks were observed in the lower slope position, enset farm land and upper soil depths. Regarding to land use difference, 18.65 and 13.50 t/ha SOC stock were observed in the enset and cultivated farm land respectively. TN was also highest in the enset farm land as compared with cultivated and woody land. In contrast, the lowest soil organic carbon stocks were recorded in the upper slope position of cultivated land and lower soil depths. Both SOC and TN stocks were significantly decreased from the upper soil layers to lower soil depths. Soil physical properties were also significantly influenced by topographic position, land use difference and soil depths. Soil clay contents were highest in the enset and woody land while lowest in the cultivated land. However, soil bulk density, soil silt and sand fractions were highest in the cultivated land. Moreover, soil clay content was significantly increased from upper to lower slope position and vice versa for soil bulk density, soil silt and sand fraction. In conclusion, based on the confirmed result, it deserves to improve soil fertility management under different land use types and slope categories, so that soil organic carbon, total nitrogen and soil clay contents could be improved accordingly.

Soil has three important and inter related physical, chemical and biological properties, which makes it functionally complete resources. The inherent characteristics of soil which are mainly the resultant of parent material and climate undergo subtle change due to different land management practices. Some inherent soil properties such as soil pH and texture as well as climatic conditions have substantial influences on soil properties transformation [1]. Types of land use, intensity of cultivation and fertilizer sources are major factors responsible for soil properties transformation. Among this factors, soil management has a marked influence on soil organic matter (SOM) dynamics in agricultural system [22]. Land-use practices affect the distribution and supply of soil nutrients by directly altering soil properties and by influencing biological transformations in the rooting zone. Although its consequences vary, land conversion frequently leads to nutrient losses when it disrupts surface and mineral horizons (e.g.,by mechanical disturbance) and reduces inputs of organic matter [24].

In agricultural ecosystem soil organic matter (SOM) and total nitrogen (TN) are an essential ecosystem component which are major determinants of soil fertility whose dynamics are affected by soil management practices, and are closely related to soil productivity [22],[13]. Primary plant production and soil biological activity are the two main biological processes governing inputs and outputs of SOM in the system, and the equilibrium between both determines the SOM cycling dynamics [20]. Soil organic carbon also associated with other major nutrients especially phosphorus and nitrogen, and hence influences recycling and availability of nutrients for agricultural production system sustainability [2].

Declining soil fertility and land degradation in the forms of soil erosion is threatening agricultural productivity, which is the main stay of the economy, in Ethiopia [16]. However, despite the general recognition of the problem of soil degradation and its impact on agricultural productivity, there are few efforts to quantify the extent, rate and process of soil fertility depletions under various land use systems and management practices [8]. It is estimated that there is a 1-2% reduction of soil productivity annually from the crop lands in the Ethiopian highlands due to land degradation [14]. One aspect of land degradation leading to such decline of soil productivity is loss in organic carbon and total nitrogen due to erosion, intensive decomposition, or leaching. In countries like Ethiopia where there is serious food insecurity due to impoverished soils, the importance of soil organic matter maintenance need not be overemphasized [15]. Therefore, the major objective of this study was to investigate current status of soil organic carbon and total nitrogen dynamics under different land use types and topographic positions in the Enset dominated farming system of Southwestern Ethiopia

2.1. Description of the Study Area 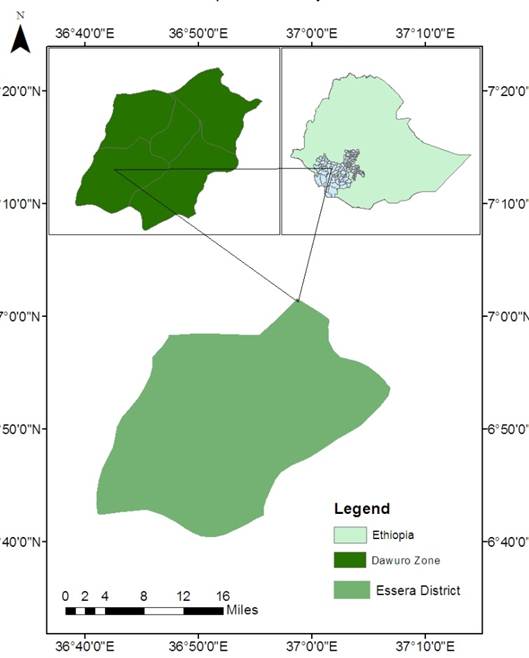 Figure 1. Map of the study area.

Farming systems of the region (area) is broadly classified in to cereal based farming system and Enset- Root crops complex in combination with different agro- forestry systems. Enset is a plant native to Ethiopia that is often referred to as the false banana because, not surprisingly, of its resemblance to the banana plant. It is grown in the less arid highlands of the south western region of Ethiopia. The major annual food crops grown in the area, includes cereals (maize, sorghum, barley, wheat, and teff), pulses (beans, peas). Maize and wheat followed by beans and peas were grown in the highest proportion in the area. The most common agro-forestry tree species, in the grazing and enset farm in the study area includes, Cordia africana, Millettia ferruginea, Ficus spp., Grevillea robusta, Acacia spp, Coffee (C.arabica) and some fruit trees like Mangifera indica L., and Persea Americana. Musa acuminate and root crop (potatoes and taro) are also grown in a considerably especially in enset farm land.

2.3. Methods of  Data Collection and Analysis

Three representative land use types namely, cultivated land, Enset farm and woody lands were selected from three slope positions, lower (3-8%), middle (8-15%), and upper (15-25%). From each slope positions and land use types a plot with 25x25m size was marked as a sample plot following a method applied by [7]. The soil samples were then taken from five points in an ‘X’ design (from the middle and four corners of the plot) and from five subsequent soil depths (i.e.0-5, 5-10, 10-15, 15-20 and 20-25cm). Accordingly, from each land use types both composite and core sampled soils were collected for soil chemical and physical analysis. For soil chemical analysis the samples were air dried and grounded to pass through a 2-mm sieve. Total SOC was quantified by wet digestion with a mixture of potassium dichromate and H2SO4, under external heating [25]. Soil TN was measured after sulfuric digestion followed by Kjeldahl distillation [23]. Soil bulk density was determined by the soil core method which is the ratio of oven dried mass of soil to core volume, and soil texture (sand, silt, and clay contents) was obtained by sieving and decantation procedures according to [21]. Soil texture was estimated using Hydrometer method [10] after destroying organic matter by adding hydrogen peroxide (H2O2) and dispersing the soil through adding sodium hexameta phosphate(NaPo3)6.

Total organic C and TN stocks were calculated by the formula:

Where,ds is the soil bulk density

The comparisons among land use types, topographic positions and soil depths were conducted by using SAS version 9.2 software packages for analysis of variance (ANOVA). When the analysis of variance (ANOVA) showed significant differences (P<0.05) among the various land use types, soil depths and slope position for each parameter, a mean separation for each parameter was made by using LSD (Least Significant Difference) test.

The over all mean of several soil properties significantly influenced by land use types, slope position and soil depths. Soil physical properties includes soil bulk density, sand, silt and clay fraction were significantly affected by slope position (Table1&2). The highest soil bulk density was recorded in the upper slope position which could be due to less addition of crop  residue and trampling effect of livestock. Because of small land holding size grazing intensity was very high in the upper slope position. Similarly, sand, silt and clay proportion were also significantly influenced by land uses. Enset and woody lands have highest clay content and lowest silt and sand fraction. In opposite to this, cultivation land has lowest clay and highest silt and sand fraction (Figure 4). In the study area enset farm land receives more attention because it is considered as a food security crop. As a result, there is frequent addition of organic matter, crop residue, cow dung and house hold residue in the enset farm land. As soil organic matter improved, soil clay content might be increased and silt and sand content decreased (Figure 3). However, soil bulk density was not significantly different due to land use difference.

Table 1. The influence of topographic positions,land use types and soil depth on selected soil physical and chemical properties.

Table 2. The interaction effect of topographic positions and land use types on SOC, TN stock and selected soil physical properties.

Table 3. The interaction effect of land use types and soil depths on SOC, TN and selected soil physical properties. 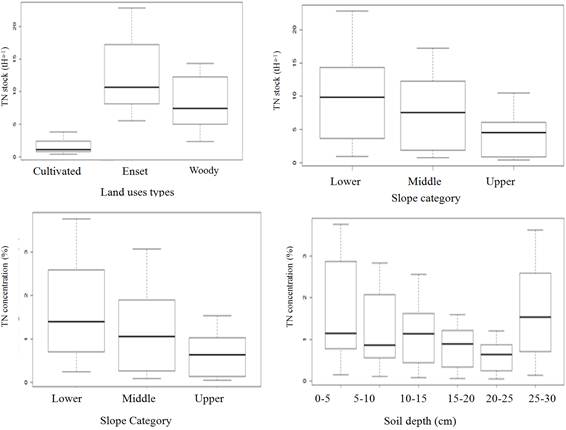 3.3. The Relation Between SOC, TN and Soil Texture 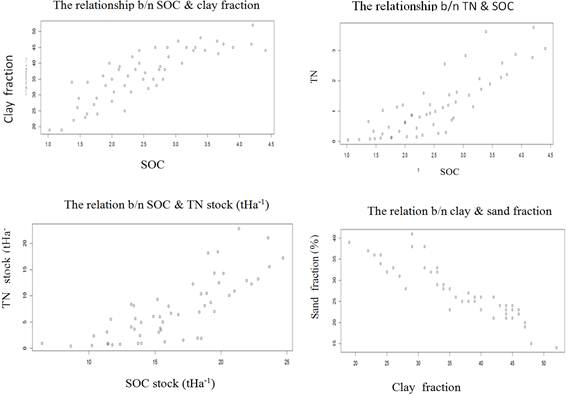 Figure 3. The relationship between SOC, TN stock and soil texture. 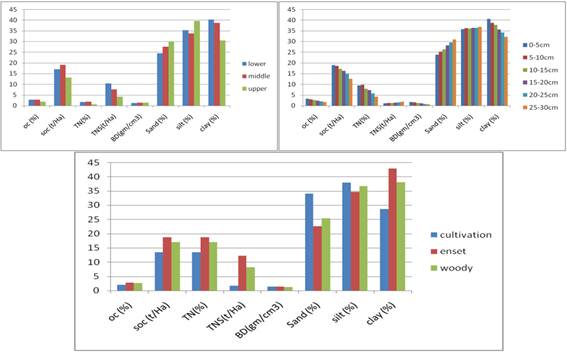 Topographic position, land use types and soil depth interaction were significantly influences soil physical and chemical properties in the study area. Lower slope position has improved soil organic carbon and total nitrogen stock. Similarly, enset and wood land has highest clay content, organic carbon and total nitrogen. However, soil bulk density, soil silt and sand contents were lowest in the enset and woody land. This signals the great need for soil nutrient management measures such as integrated nutrient management (application of organic and inorganic fertilizers), growing of N2 fixing crops and application of agro-forestry in to the farming systems. so that, soil organic carbon total nitrogen and soil clay contents will be improved and enabled production of sufficient food for the farm households by minimizing nutrient depletion.