Abstract: The value of the Earth crust rocks ultimate strain together with other physical-and-mechanical characteristics plays an important role in problems on setting maximal values of displacements, velocities and accelerations of grounds in the course of quakes, in determining of the value of potential strain energy accumulated in the medium when a process of a large quake maturation runs, in prognostication of a quake by "ultimate strain of rocks" forerunner as well as other problems, are related to the soil bearing resistance and behaviour. The paper represents a developed method for determining the magnitude of ultimate strain of soils thickness of the Earth crust in natural conditions by the relative slips on the earth surface after a large earthquake. Are obtained the empirical dependences of the value of ultimate strain from magnitude of earthquake, relative slips, the rupture length, and seismic moment by analysing values calculated by the proposed method for the 44 strong earthquakes with a magnitude of 5.6-8.5. A comparative analysis of the ultimate strain values is given which is obtained by other authors by the method of geodesic triangulation.

The value of an ultimate strain of any material, including rocks, is established on the basis of mechanical testing of their samples to the point of destruction stage. For tough materials the method of such testing and processing their results now is essentially unified and are beyond any doubt. Establishment of strength characteristics of rock and hard soils is made according to the foresaid standard procedure. As for other loose and mild soils, then they show some resistance under tension, compression and shear. However, strength of soils, basically, is determined by their capacity to resist shear, since resistance to compression in rare instances turn out depleted, and soils in real conditions are almost unaffected by tension. At that in all testing procedures standard laboratory small-sized soil samples undergo testing. Since assessment of shear stresses level is much difficult than that of angular deformation, then as parameters of strength or ultimate strain is assumed the magnitude of distorted angle

under pure shear, based on known ratio of elasticity theory

is shear module of the ground. On the basis of laboratory tests it is thought that the magnitude of crust rock can be taken equal to

The value of a ground ultimate strain can also be determined by differences of triangulation points displacements in epicentral region, established by their measurements before and after earthquake.

measured in the same way according to K. Tsuboi for a considerable number of earthquakes in Japan, in particular, for 1927 Tango earthquake with M=7.5 was about 10-4, according to the results obtained by T. Rikitake was 0.5·10-4 on the average, K. Mogi obtained from 0.1·10-4to 1·10-4 depending on an earthquake.

found by laboratory tests and making use of geodetic surveys of triangulation points is explained in that the real crust in comparison with laboratory samples contains a great number of fine discontinuities, cracks and weakening, which essentially decrease microscopic strength of the rock crust. The articles [1-3] are devoted to various aspects determine

using geodetic observations and laboratory tests of fragments of soil, and also their uses for establishing the probability of earthquake occurrence.

In contrast to usual impacts during an earthquake not a uniform layer of a certain ground is affected by the quake but an entire soil thick layer of various grounds of great strata, equal to the depth of the earthquake source. Therefore, the real magnitude of the ultimate strain of the crust composed of such strata can be determined only by strain parameters of the source in the final stage before happening of the quake. In the present work an attempt was made to determine the magnitude

of the ultimate strain of ground strata of the Earth crust in natural conditions by parameters of consequences on the earth surface made by a large earthquake: rupture length, the source depth and magnitude of a relative slip. It is assumed that the maximum value of the long-term static deformation of the medium is equal to half the relative slips, formed on the surface of the earth after a large earthquake.

2. Statement of the Problem

In the process of a long maturing of a large earthquake in regions around future rupture occur considerable static shear stresses and shear deformations. At the moment of earthquake burst the latter reach to their ultimate values

, and take place crack of the crust with formation of a new rupture of L length and relative slip of

length on the earth surface, i.e. destruction of crust rock of great volumes in natural conditions takes place. The earthquake, as if, becomes a natural test equipment of tremendous dimensions for establishing strength characteristics of earth crust soil power. Static shear stress-strain condition of the medium before the very beginning of crack (earthquake), in regions directed perpendicularly to the future rupture, naturally, is of diminishing character. In our works [4, 5] analyzing the results presented in the work of T. Rikitake [6] on measurement of ground deformation in the epicenter zone by differences displacements of triangulation points before and after the earthquake for a great number of large earthquakes boundaries

at the rupture shown in Fig. 1. as a result the following

dependence [4] has been suggested:

. The magnitude of the relative slip along the rupture usually has a irregular distribution [7]. 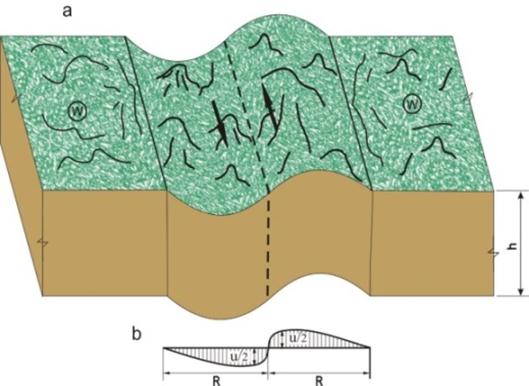 constant relative shear takes place along the whole length L of the rupture and depth h of crack of rupture planes.

Thus, it is suggested that stress-strain condition of the crust while an earthquake is matured is presented in Fig. 2 [4] by hatched area, limited by some closed graph C before he rupture in Fig. 2a, and after it – in Fig. 2c. 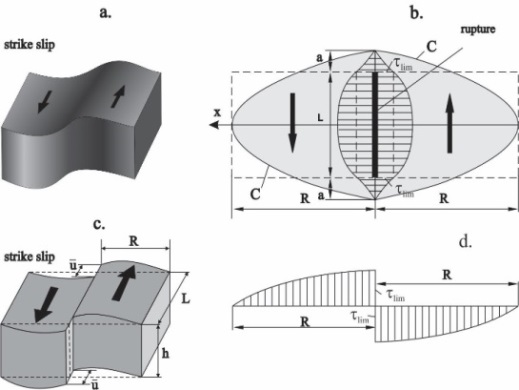 It is assumed that outside that closed graph magnitudes of stresses and deformation medium are substantially small in comparison with their values at the rupture, and therefore can be neglected. It is seen from Fig. 2 that the region accountable for stresses and strains limited by C curve can be replaced by an equivalent rectangle area with 2R and L sides shown by a dashed line. In other words it is regarded that the starting moment of earthquake the static stress condition of the medium was distributed in two rectangular parallelepiped of R, L, and h sides, where h is the depth of the actual rupture, L is the length of the actual rupture, R is the distance of the actual rupture beyond which the W medium (Fig. 1) can be regarded as no stressed by maturing earthquake. Values of static displacements of parallelepipeds near rupture is suggested equal to, where is the actual average slip after earthquake.

Considering that the length L of the rupture according to Table 1 for all analyzed earthquakes is larger than the length R, may be presumed that in the process of static deformation both prismatic spaces with L x h x R dimensions were affected by pure shear as shown in Fig. 2 for left hand shear (LL). 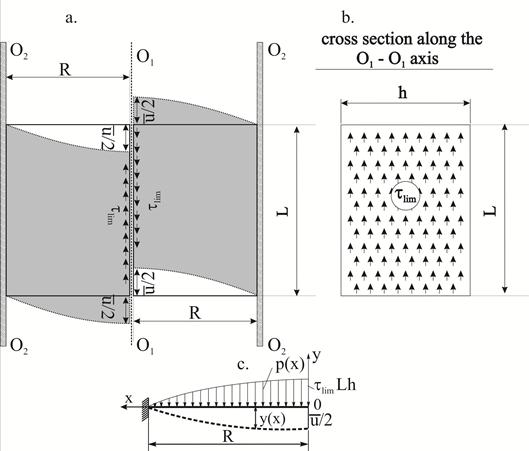 In all other types of the crust rupture, presented in the Table of earthquakes, rupture occurs by reason of the soil’s loss of shear resistance in different planes of the crust. Values of maximum and average slips

correspond with deformations of shears in that planes, and the distance

, are perpendicular to directions of discontinuities for all earthquakes irrespective rupture type. Therefore, conventional design scheme illustrated in Fig. 3, can be considered acceptable for all 44 earthquakes.

3. Solution of the Problem

Since before the earthquake burst both deformed parts of the medium are in statically equilibrium state, according the generally accepted law of mechanics, each of these parts will also be in equilibrium state if to the part under consideration is applied influence of removed part in the form of distributed forces. In our case these

forces will be shear stresses

, multiplied by the cross-section area L x h as shown in Fig. 3c. At that the force at the rupture plane will be maximum and equal to

As an optimal dependence of forces

along the length R, on the analogy of [4, 5] can be assumed the following dependence:

which satisfies the foresaid conditions:

Since it was assumed that both parallelepipeds undergo pure shear, for their calculation a scheme shown in Fig. 3c can be used in the form of a cantilever beam which undergoes pure shear by distributed variable load p (x). Differential equation of an bend axis of such a beam under pure shear is of the following form [8]:

F=Lh is the area of the beam cross-section,

D is integration constant, which can be determined by the following condition:

Substituting values of D into (4) for the bend beam axis y (x), we have:

According to the problem statement

Substituting R values, obtained by formula (1), into (7) for ultimate deformation we get the following relationship (where is the relative slip measured in meters).

In the bottom row of the above Table 1 values

for all 44 earthquakes of 5.6 to 8.5 magnitude computed by the formula (8) are presented. Graphical distribution of values

for the earthquakes being under consideration is shown in Fig. 4

It is seen from the Table 1 the minimum value

took place for 1979 Homestead Valley (USA) earthquake with magnitude ranging from M=5.6 to 15.03 with minimum rupture length (6km) and minimum depth of the source h=4km, and minimum slip

. The maximum value of ultimate strain

slip which can also be considered logical. The average value

for all 44 earthquakes is

. Taking into account that the majority of real earthquakes with M<7.0 magnitude the probability of the rupture coming out to the earth surface (cracking) is very small, and that of considerable errors in the rupture length L, especially the length of the average slip

, noticeably great To get more real picture of ultimate strain

values of 18 relatively small earthquakes with M<7.0 magnitude have been excluded from the above table. These earthquakes are hatched in the table. As can be seen from Fig. 4.b in this case ultimate strain

is all in all 5 times, as opposed to 44 earthquakes, when this difference comes up to 36.5 times. The average value of

for 26 earthquakes with M≥7.0 magnitude came up to 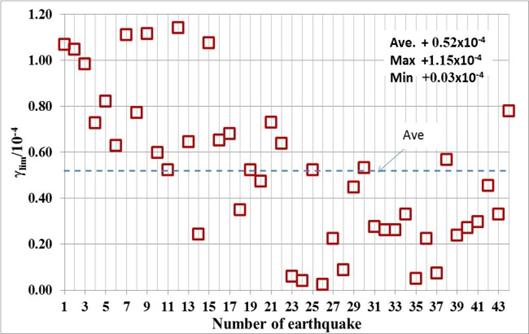 Figure 4a. Distribution of glim ultimate deformations values а- for 44 earthquakes with 5.6≤M≤8.5. 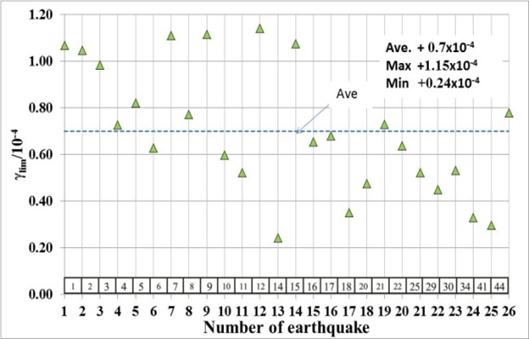 Figure 4b. Distribution of glim ultimate deformations values b- for 26 earthquakes with M≥7.0.

As shown in Fig. 5 the dependence of

From the above figure is seen that both dependences are well interpreted with the following empiric dependences:

Also there is good correlation between

and the average slip 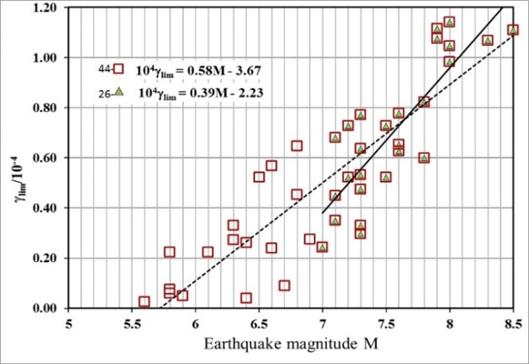 These dependences can be interpreted by the following way:

Analysis of the obtained results shows that between

and rupture depth h, as well as between

and rupture area L∙h there is no determinate correlation, however for large areas of a rupture within 2000≤Lh≤6000 (km2) values of

tend to be stabilized around 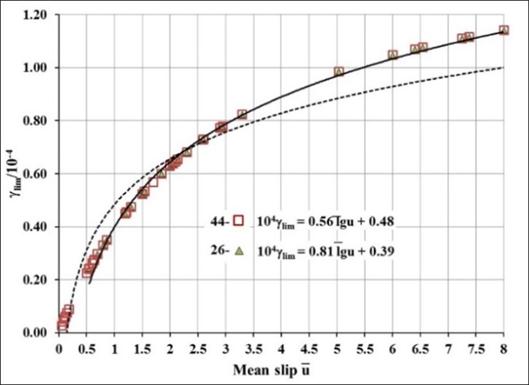 Figure 6a. Dependence between of glim and average slip 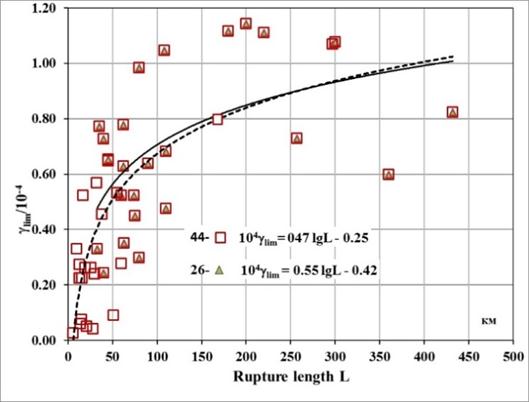 Figure 6b. Dependence between of glim rupture length L (km). 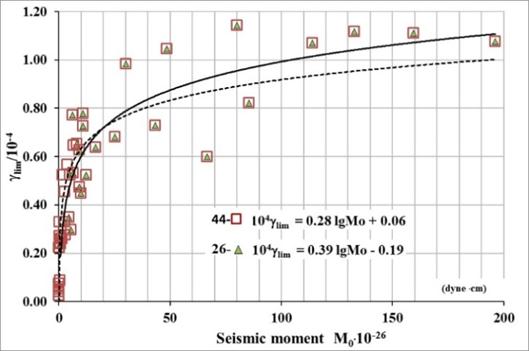 In table 2 values of

found by various researchers and obtained by the present study show that values obtained by computation on the basis of the formula (8) well correlate with those obtained earlier by other scientists.

1.   Developed a method for determination the values of the ultimate strain of soil strata thickness of the earth's crust relative to the value of the slip on the earth's surface by the author’s proposed scheme of occurring of strong earthquake.

2.   For 44 strong earthquakes with a magnitude 5.6≤M≤8.5 the values of the ultimate strain are obtained

and proposed their empirical dependence from the magnitude of the earthquake, the relative movement, the length of the rupture and seismic moment. A comparative analysis of the ultimate strain

with their values is given by the method of geodesic triangulation.