The Impact of Environmental Factors on the Composition of the Diatoms in the Sediments of the Pavlovka River (Primorsky Krai, Russia)

Abstract: This paper presents the results of a study of diatoms from the sediments in headwaters of the river Pavlovka (K-EL007). The diatom taxonomic composition, ecological structure and their quantitative content were analyzed. 120 diatom species belonging to 38 genera were ideated. The data allowed to allocate 7 ecozones. The changes revealed in the ecological structure of the spore-pollen spectra and diatoms paleo-community allowed to assume during what time these sediments were formed and under what climatic conditions.

The research of environmental change Primorsky Krai is very interesting for paleoclimatology, archeology, ecology and paleoecology. The source of such information are the various paleo-indicators, such as of diatoms. Diatom analyzes one of the most important methods micropaleontological because of diatoms are sensitive to changes in the environment, they have a rapid evolutionary transformation that helps with biostratigraphic scheme of detail. Widespread diatoms in sediments of marine and continental facies and well-preserved valves, in their turn allows you to confidently determine the genesis of sediments [1,2,3,4,6,7,22].

We have studied sectional, late-glacial sediment in the upper stream of the river Pavlovka (K-EL007). This river is in Chuguyivsky region Primorsky Krai and Russia (former appellation - Fudzin) is the right tributary of the Ussuri river. The length of the Pavlovka river - 132 km, the total area of basin - 3360 km² [9]. (Figure 1)

Preparation of samples to conduct diatom analysis was carried out using standard techniques. To analyze the relationship between the frequency of occurrence separate taxa and environmental groups more than 250-300 diatom valves calculated, providing statistical sample. [8] Identification of the species composition of diatoms, was carried out using light microscopes Axio Lab. A1 Zeiss [4,8]. 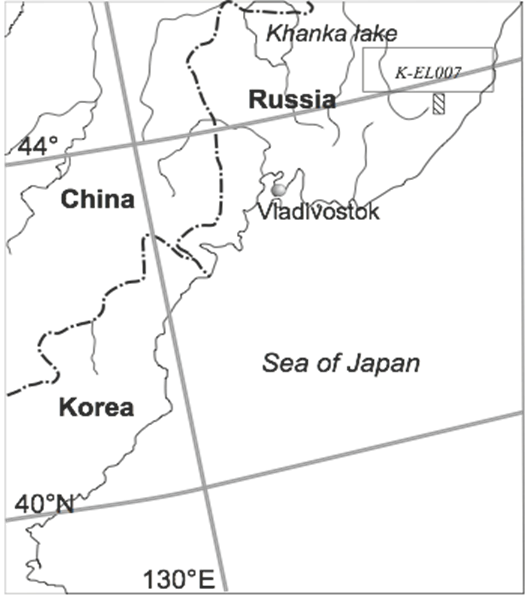 Figure 1. Location of the studied section of the Pavlovka river (K-EL007).

A study section late-glacial sediments in the upper reaches of the river Pavlovka (K-EL007), diatom flora is represented by 120 species and intraspecific varieties belonging to 37 genera.

Table 1. The most informative diatom species of the section of K-EL007.

These species are separated into 7 ecological groups:

The sediment partizansk horizon constitute the middle part the incision 4 meter terrace and are located at the roof blurred chernoruchinsky horizon, we allocated 5 complexes of diatoms, which reflect paleoecological succession.

We allocated from the sediments of the interval spore-pollen spectra, which is dominated by pollen of parvifoliate birch Betula mandshurica (Rgl.) Nakai (70%), B. sp. (20%), B. sect. Nanae (2%). Against the background of a slight presence of pollen broadleaf Quercus, Ulmus [23].

Complex 4 was selected in the range 190-170 cm. It is characterized by the disappearance of the majority of species Eunotia and noticeable reduction in the number of species Pinnularia (up 6%), with the appearance of 3 and 5 representatives of environmental groups diatoms. There are planktonic (up 7%) Aulacoseira italica (Ehr.) Sim., A. islandica (Müll.) Sim. and of benthal-littoral species of the temperate latitudes: Pinnularia episcopalis Cl. (15%), Caloneis leptosoma (Grun.) Kram. (10%), Eunotia tauntoniensis Hust. ex Patrick (3%), Cymbella tumida (Bréb.) Heurck (3%), C. stuxbergii (Cl.) Cl. (4%). The spore-pollen analysis revealed the dominance of parvifoliate pollen, as well as in complex 2 [23].

Сomplex 5 was selected in the range 170-105 cm. The dominants are representatives of four groups of diatoms, benthic and arkto- north-boreal species: Eunotia bidens Ehr. (16%), Pinnularia streptoraphe Cl. (12%), P. brevicostata Cl. (5%). Appears representative of the 3 groups of diatoms Synedra ulna (Nitz.) Ehr. (8%). Against the background of a slight presence of types 5 and 7 groups of diatoms. These spore-pollen spectra from sediments of the interval reflects a decrease pollen broadleaf species with an increase in the total number of pollen dark coniferous species [23].

Сomplex 7 was selected in the range 35-20 cm The main role in the structure of this complex play diatoms 4 groups: Pinnularia cardinalis (Ehr.) Smith (10%), Hantzschia amphioxys Grun. (10%), H. elongata (Hantz.) Grun. (12%). It is impossible not to note the growth of the number of species of diatoms, group 5: Pinnularia episcopalis Cl. (8%).

Identified changes in the ecological structure of the diatom paleo-communities and spore-pollen spectra suggest that the formation of complexes sediments 1, 3 and 5 can be roughly classified according to the Early, Middle and Younger Dryas, and the complexes 2 and 4 - to Boelling and Alleroed. The spore-pollen analysis adds confidence in this conclusion. Complexes 6 and 7 correspond to Preboreal and Subatlantik respectively [4, 23].

The author thanks Vladimir Pushkar (FEGI FEB RAS) for his valuable advice in the preparation of this article. The reported study was funded by RFBR according to the research project No. 16-35-00198 мол_a.