An Assessment of Aquatic Biodiversity of River Bagmati Nepal

Abstract: Bagmati is the most important river of the Kathmandu valley. It is the symbol of civilization and watched sacred in Hindu religion. An assessment were done in 2012-2013 in five sites of Bagmati in Kathmandu valley which revealed that the river is totally polluted with bacteria, aquatic flora and fauna and with sewage. The main tributary of the river system, Bagmati has been destroyed by pollution, the water is black and poisonous, crawling with flies and contaminated with sewage. In absence of proper plans the river’s environment is under intense degradation for last couple of decades. The degradation thus depicts the degradation of the civilization within the river valley. Thus there is an urgent to address the river for its longer life both by public and government.

Aquatic biodiversity can be defined as the variety of life and the ecosystems that make up the freshwater, tidal and marine regions of the world and their interactions. It encompasses freshwater ecosystems including lakes, ponds, and reservoirs, rivers and streams, groundwater, and wetlands. It also provide a home to many species including phytoplankton, zooplankton, aquatic plants, insects, fish, birds, mammals and others. Aquatic biodiversity are organized at many levels from the smallest building blocks of life to complete ecosystems, encompassing communities, populations, species, and genetic levels [1]. Aquatic biodiversity has enormous economic and aesthetic value and is largely responsible for maintaining and supporting overall environmental health [2]. Humans have long depended on aquatic resources for food, medicines, and materials as well as for recreational and commercial purposes such as fishing and tourism. Aquatic organisms also rely upon the great diversity of aquatic habitats and resources for food, materials, and breeding grounds [3].

Bagmati is the most important river of the Kathmandu valley. Bagmati is not merely a river but a symbol of civilization. The main tributary of the river system, Bagmati has been destroyed by pollution, the water is black and poisonous, crawling with flies and contaminated with sewage [4]. In absence of proper plans the river’s environment is under intense degradation for last couple of decades. The degradation thus depicts the degradation of the civilization within the river valley. The water in the river gives off a terrible strench. In the valley, the river is utilized for irrigation and drinking water supply, and also as a sewer for domestic and industrial waste. In addition Bagmati together with its tributaries is the main source of sand utilized in concrete construction [5]. The other major aspect is the religious and social importance of the river. The contradiction between holiest and dirtiest river has also been addressed. Therefore, there is a serious need of a study suggesting ways and means to keep the river clean and conserve its biodiversity.

The present study approaches were to analyze Bagmati water quality and correlate it with the presence of microorganisms, invertebrates and vertebrates population of the river. This study also describes how the deterioration of the river system has affected development in Kathmandu and the traditional respect for river.

Sampling site of Bagmatiriver was selected randomly. Five sites (namely 1 Gokarna, 2 Bagmati bridge, 3 Sankhamul, 4 Teku and Chovar respectively) were selected on the basis of difference in substratum, topography, abiotic and biotic factors and water pollution in 2012. Different parameters were observed and measured which are described in detail with the following sub-topics.

Yeast and mould was counted by multiple tube fermentation technique. The unicellular yeast and multicellular molds were distinguished on the basis of microscopic appearance of the colonies. The yeast produces moist creamy opaque or pasty colonies whereas the filamentous mold produces cottony powdery colonies.

Diatoms were measured directly by microscopic techniques (some after concentration), the analyses most commonly performed are for so-called "indicator organisms."

i Biological sampling and estimation of the habitat composition

A Multi-Habitat Sampling (MHS), [6] is considered as fundamental requisite of multi-metric assessment approaches that evaluate the ecological status of rivers. A sample in MHS included 20 sampling units taken from all habitat types at the sampling site, each with a share of at least 5% coverage. A total of 20 samples were taken and a single composite was prepared.

An AQEM/STAR net sampler with 500 micron mesh size was used for sampling. The net was attached to rectangular metal frame of size 25*25 square cm, the opening of the net was placed opposite to the flow of the river vertically on the stream bed. The substrate was disturbed by hands up to varying depths depending upon the sampled substrate in order to dislodge the animals from the substrate.

Samples were transferred from the net to sample container and preserved in 4% formalin to cover the sample completely, immediately after collection. This form of fixation was important to prevent carnivores, particularly stone flies and beetles from eating other organism. The sample container was closed tightly. The sample was stored cool. Site location was placed outside of the container with date.

Samples were kept for at least a week to allow the specimens to fix in the formaldehyde solution. After that the sample was thoroughly washed in different mesh size and transferred into different white enamel tray for sorting. The specimens were sorted and kept in different Petridish. The sorted biological specimen was identified up to family level by referring to various identifications keys [7].

The value of Coliform bacteria in the water of Bagmati river was maximum (65280 ±28193.1CFU/ml) in summer season and minimum (28920 ± 6289.45CFU/ml) in winter season. However, no significant difference was noted in the second year. Two way ANOVA showed no significant difference in the population of coliform bacteria in three seasons and at five locations (Table 1, Graph 1). This result reveals with the results of Mehta [9].

The value of yeast and moulds were higher (454000±163011.66) in winter and minimum (52260±27605.36) in summer during a period of two years. The same trend was noticed during the second year also. Two ways ANOVA showed no significant difference in yeast & mould population of Bagmati water in three seasons and at five locations (Table 1, Graph 1). 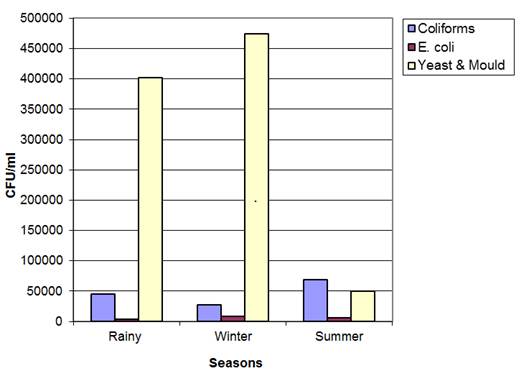 Phytoplanktonis the autotrophic component of the aquatic community. Most phytoplanktons are too small to be individually seen with the unaided eye. However, when present in sufficient numbers, they may appear green due to the presence of chlorophyll.The examples of observed phytoplankton are described below.

Table 2. The Diatoms of Bagmatiriver.

Several species of zooplankton were found upstream of Gokarna during 2012-2013 [10]. Their abundance varied from 8 to 15 per litre. The major groups of zooplankton recorded from Bagmati river belonged to Cladocera, Ostracoda, Protozoa, Rotifera, and Copepoda (table 3).

Cladocerans were recorded in nursery beds in fair numbers in the Bagmati. In the upstream Gokarna contained common genera of Cladocera representing Diaphanosoma, Siminocephalus, Daphnia, Ceriodaphania, Moina and Alona.

The population of Ostracods was poorly represented in the upper sections (upstream Gokarna) of the Bagmati. They were represented only by the genus Stenocypris and Heterocypris.

Common copepods inhibiting the Gokarna site were Diaptomus and Neodiaptomus which sustain the food chain of larval fish.

Many submerged plants flourish in the Bagmatiriver downstream of Sundarijal. In clay bottom areas with slow water current, aquatic plants were found to grow profusely. Among aquatic plants Chara, Najas, Potamogeton, Vallisneria and Hydrilla were the most common. In some places, Ranunculusaquatilis, Marshilia, Ceratophyllum and Cyperus were frequently observed (table 4) [9].

The results on the examinations of water for benthic fauna are given below. Taxa belonging to 5 invertebrate groups were recorded: insect nymphs/larvae (18 taxa), Oligochaete worms (3 taxa), leeches (3 taxa), snails (2 taxa) and bivalves (1 taxon) (table 5). Insect nymphs/larvae were predominantly present in the Bagmati River and its tributaries. In particular, the blood worms (midge larvae, Chironomids) were recorded at all five sampling sites. Midge larvae were regarded as pollution- tolerant macro-invertebrate species. Their presence in the aquatic habitats combined with the absence of pollution sensitive species, i.e. mayflies (Ephemeropteran) and stoneflies (Plecoptera), reflected the poor water quality of river. These were recorded in Gokarna only.

Fish are poor indicators of water pollution than plankton, but present study showed a significant decline in their population.

As the river enters the urban areas of Kathmandu near Pashupatinath, Gausala water becomes much polluted with untreated domestic sewage. These areas are inhabited by more pollution resistant fish such as minnow, murrel and cat fish. Pollution threatens even these hardy fish, which can be seen dying in the urban section of the river. Further downstream, the Nakhukhola adds considerable amounts of water and dilutes highly polluted Bagmati. The presence of aquatic birds and fish is indicative of less polluted waters that the Nakhukhola contributes to the Bagmati. The river is still polluted, but fish such as murrel and cat fish reappear in this region [9].

Growth of the population of myxophyceae, which is the characteristic representative of pollution, were found maximum at site Nakhu which received a mixture of sewage sludge and the effluents of many factories. The number however, declined at sites III and IV where some of the matter had settled and stabilized. Diatoms (Bacillariophyceae) were found to be the predominant plankton of Bagmati. It is interesting to note that the flow of water between sites III to IV is more steady and shows heavy pollution. These two factors might have contributed in increasing the population of diatoms at these two sites. In polluted stretch, the protozoans and insects occur in quite large number which indicates the polluted condition of water. Further, the number of rotifer and entomostracan was fairly low in polluted waters [9].

The presence of some specific species of benthic invertebrates is an indicator of clean, unpolluted water, while some other species thrive well in polluted water. Thus, macro invertebrates are commonly used to evaluate the ecological integrity of streams and as indicators of water quality assessment.

Highest number of sludge worms and blood worms had been recorded at sites V while that of mollusks at site I, both of which represent opposite water conditions. These conditions have a direct bearing on the benthos [9].

It is difficult to define any single species of fish as an indicator of pollution in the strict sense. Some species of fishes i.e. murrel, cat fish, minnow and flying barb (Esamusdanricus and Puntiussarana) generally occur at a number of polluted sites and seem to be more tolerant than other fishes.As a group, the carps seem to be most-sensitive to pollution while murrels are highly tolerant. The other groups consisting of feather-backs and mullets are among the moderately tolerant fishesMehta [9], [11] and [10].

The Bagmati water can be placed under highly polluted by bacteria, the value being very high at all the five sites. Although the river is originally a mixture of sullage, industrial waste and city sewage, the bacterial count was low at site first (Gokarna), remaining all four sites having higher count of bacteria. Bacterial quantity of Bagmati river water indicates that river appears to be badly polluted. Human diseases have also been accredited to water pollution outbreaks of innumerable cases of enteric fever and other epidemics contributed by polluted shell-fish. It could be presumed that most of the fish inhabiting the heavy polluted areas of this river might have picked up these bacteria during feeding which were ultimately transferred to the human population that consumed polluted fish and thereby hosted several diseases.

Here are some recommendations for the solution for the regeneration of the river Bagmati of Kathmandu valley:

A.     Necessecity of the comparative study and appropriate choices of the following wastewater treatment technologies by the national debate:

B.     Government has to solve the problem of the squatters who are living along the bank of the rivers of the valley

D.     Once the sewage from the rivers of Kathmandu valley is separated, a major battle in the war to clean up the river will have been won.

There is an urgent need to carefully regulate and control human activities, resource use, and waste disposal in order to improve the water quality in the Bagmati. This can best be accomplished in conjunction with improved environment planning and control and inter-sectoral coordination at national, and local levels.