Abstract: In this study, Hylarana nigrovittata was used as specimen organism to explore antipredator behaviour. In March 2016, five adult males of H. nigrovittata were collected from its natural habitat at Lata Bayu, Baling, Kedah, Peninsular Malaysia. When these specimens released in an open area, they leaped in various directions and showed several defensive mechanisms. Active escape is the main strategy and observed in all the specimens. Death feigning behaviour was shown by specimen 1 and 4, crouching down by specimen 3 and stiff-legged by specimen 4. However, specimen 2 and 5 hasn’t shown any defensive strategy except the active escape. These findings revealed the antipredator mechanism developed by H. nigrovittata, for a protection against the potential predators.

Various predators, including snakes, fishes and birds consumed frogs as their food [3]. For self-protection, anuran species developed various defensive strategies, including feigning death, crouching down, contraction, body raising, skin secretion and mouth gaping [3,18,16,17]. Multiple defence mechanisms might be utilized together for the survival [17]. Predation can be avoided from a potential predator by rapid movement, hiding or a combination of it [3,17]. However, some slow moving species have developed death feigning, stiff-legged and unken reflex in response to encounter by predators [3].

Five adult males of H. nigrovittata were collected from Lata Bayu, Baling, Kedah, Peninsular Malaysia (5º43’N, 100º48’E; elevation 104 m asl) in March 2016 (Fig. 1). The specimens were caught at night (20:00-22:00 hours) by hand, and aided with flash lights and head lamps. These were found along the river banks, rock pools and isolated pools, as indicated by their calling activities. Air temperature and humidity of the sampling sites were measured by using Thermo-Hygrometer. 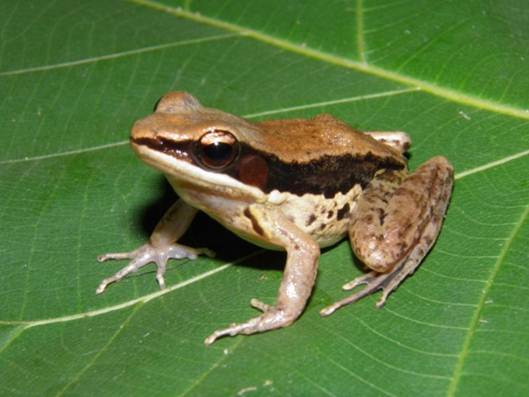 The snout-vent length (SVL), head width (HW) and weight (W) were measured by using digital calliper and electronic balance. SVL was measured from the tip of the snout to the vent area. HW is the widest area of head and W is the mass of the specimen. Identification of H. nigrovittata species was executed based on morphological characteristics given by Berry [1]. Whereas, the recognition of defensive mechanisms were based on traits given by Toledo et al. [16,17]. The specimens and their defensive postures were captured by using Olympus digital camera, model SP800. Subsequently, all the specimens were released back to their natural environments.

Specimen 1 and 2 were captured perched on wet rocks, at the edge of a rock pool, approximately 2 m near the waterfall. The moderate-sized rock pool was roughly 50 cm in length, 25 cm wide and 20 cm deep. It consisted of clear stagnant water, possessed a sandy-gravel bed and filled with dead leaves and twigs. There was no vegetation around the pool, and it was directly exposed to the sunlight. While capturing, both specimens were actively emitted the advertisement calls. The air temperature and humidity of the site were 24ºC and 62% respectively. 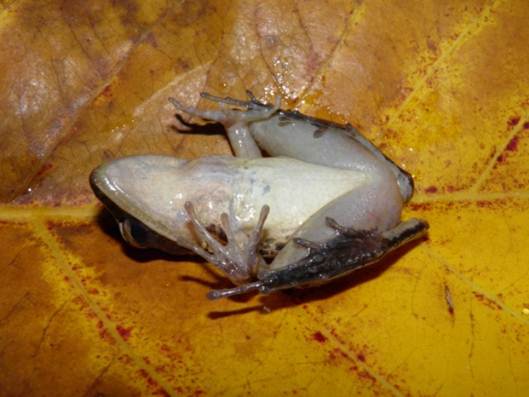 Specimen 2 (adult; male; SVL=44 mm; HW=14 mm; W=6 g) has not shown any defensive posture, except an active escape. Similar with specimen 1, this frog leaped in various irregular patterns for nearly five minutes, before get fatigued and later stayed in motionless position. After resting for nearly four minutes, it continued leaping in the same pattern mode.

Specimen 3 was collected sitting on the wet forest floor, approximately 4 m from the main river. Specimen 4 and 5 were captured among the small vegetations, at the edge of the river. Both specimens were actively calling during captured. The air temperature and humidity of the site were 23ºC and 68% respectively.

Specimen 3 (adult; male; SVL=46 mm; HW=14 mm; W=7 g) showed an active escape, hiding and crouching down tactics (Fig. 3). While trying to capture the specimen, it leaped away and hiding among the leaf litter on the forest floor. When the leaves were removed, the frog did not leap, but stayed in motionless position, and displayed a crouching down posture. Several remarks were highlighted: ventral surface flattened on leaves, chin and belly meet the substrates, body slightly arched up, exposed dark brown coloration of dorsal surface, head facing down, both eyes opened, mouth closed, fore limbs held closed to head, hind limbs insert closed to body, both limbs flattened on leaves and motionless. The frog was in the same posture for nearly one minute, before it assumed the normal position and leaped away. This behaviour was documented at the sampling site. 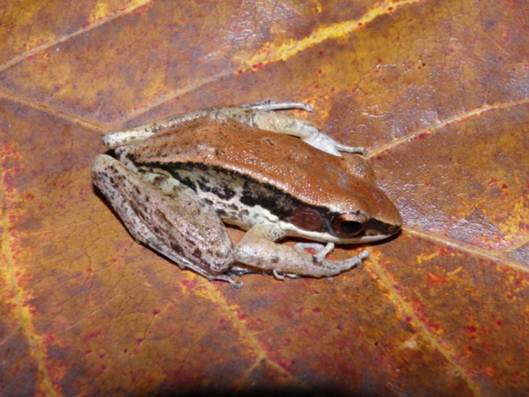 Specimen 4 (adult; male; SVL=47 mm; HW=15 mm; W=8 g) was found to display an active escape, death feigning and stiff-legged mechanisms (Fig. 4 and 5). Similar with other specimens, the frog was leaped in irregular directions for about six minutes, before being exhausted and hanged in immobilized posture. Later, the specimen was manipulated, and suddenly it twisted the body to represent a death feigning posture. The characteristics assigned by this specimen were similar to specimen 1, except for their hind limbs posture, which were stretching out. After nearly 1.5 minutes in this phase, the specimen continued leaping in a various angles. Soon, the frog was recaptured and places on leaves to photograph it. Unexpectedly, the specimen stretching out its hind limbs, and stayed immobilized to display a stiff-legged behaviour. Several traits were recorded: ventral surface flattened and touched the substrates, exposed dark brown coloration of dorsal surface, exposed dark reticulated pattern of thighs and legs, exposed dark lateral stripes, both eyes opened, mouth closed, head facing down, fore limbs flattened and held closed to body, hind limbs flattened and stretched out, static. The frog stayed in this position for nearly one minute, before revolved back to normal posture. 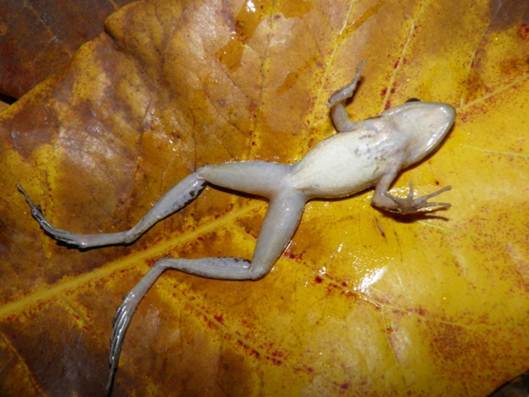 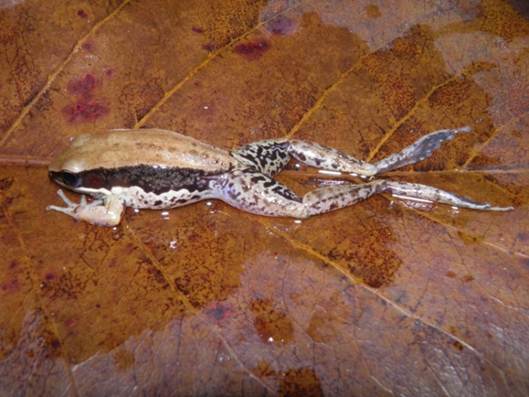 Specimen 5 (adult; male; SVL=45 mm; HW=15 mm; W=7 g) only showed an active escape, instead of other defensive mechanisms. Similarly, the frog was leaped in various irregular routes, for approximately seven minutes, before being exhausted and stayed static. After resting for nearly three minutes, the specimen continued leaping without showing any defensive mechanism, although it was approached and provoked. The antipredator behaviour displayed by H. nigrovittata was summarizes in Table 1.

Five modes of antipredator mechanism, including active escape, death feigning, hiding/camouflage, crouching down and stiff-legged were shown by H. nigrovittata. Active escape or fleeing was the main defensive strategy utilized by H. nigrovittata, as it was displayed by all the observed specimens. The specimens employed this mechanism primarily when they felt threatened or provoked. According to Toledo et al. [17], active escape is a widespread behaviour used by all anuran species, and synergistically with cloacae discharge, defensive calls and flash colour. However, these types of defensive strategies were not displayed by all the observed specimens. In our surveillance, all the specimens were leaped in various erratic patterns, for four to seven minutes, before being fatigued. Toledo et al. [17] also mentioned the active escape can be either quick and erratic, or slower but directed and vigorous.

Death feigning posture or thanatosis is a regular defensive mechanism shown by anuran species. Specimen 1 and 4 showed this type of behaviour, which was displayed after the primary mechanism (active escape), was not effective anymore. It was exhibited mostly when the specimens become exhausted and unable to escape anymore. Toledo et al. [17] also reported that death feigning posture was performed by the frogs after a series of jumps. In this action, the frog act as a death animal (death-like appearance), which may prevent an attack from a predator [16].

Hiding and camouflage tactics were displayed by specimen 3, at the sampling site. While trying to capture, the frog leaped and concealed itself among leaf litter, near a tree buttress. The dark brown coloration on the dorsal surface of the frog was resembled with dead leaves, and it made difficult to perceive by a potential predator. Hiding behaviour involves the movement of animal behind or under an object, such as leaves and vegetation or into the burrows and crevices [17]. Defensive strategies implemented by anuran species might be influences by their body coloration. Anuran species may be brightly coloured or completely cryptic. The first condition deals with aposematism, while the second one related to camouflage [15]. In this study, the colour and pattern of H. nigrovittata is completely cryptic, thus performed camouflage tactic. Both crypsis and aposematism conditions helps the anuran species to survive in their natural environments. The former condition may help to avoid the detection, and the latter may signalize that the individual is dangerous [15].

In specimen 3, the hiding/camouflage behaviour was synergistically with crouching down posture. When the frog was hiding under the leaves, it lowered the body, flexed its limbs toward body and downward the head, and thus displayed a crouching posture. This behaviour is in accordance with finding of Toledo et al. [17], which indicated that crouching down is a posture when the frog holds itself in a lower than the ordinary sitting posture. It was ranging from a slightly lowered position to a full crouch, which its chin touches the substrates.

Stiff-legged mechanism was demonstrated by specimen 4. It was presented after the frog leaped in various irregular directions, felt exhausted and cannot escape anymore. According to Sazima [11], stiff-legged is a motionless behaviour, preceded by the short leaps. It was displayed after the frog leaped for a few times in erratic ways, and ended with its body flattened and limbs stretched backwards [17]. Several forest frog species with cryptic coloration, also displayed this type of behaviour [2,4,10]. The characteristics shown by H. nigrovittata were similar as reported above.

From these observations, five antipredator mechanisms including active escape, death feigning, hiding, crouching down and stiff-legged were demonstrated by H. nigrovittata, which is important for the protection from a potential predator.