Abstract: The by-products of industrially processed fish are enzymatically converted into fish protein isolates and hydrolysates having a wide biological activity and nutritional properties. However, the heat processing may cause their thermal denaturation thereby causing the conformational changes in them. The present study utilized the strategy of biofield energy treatment and analysed its impact on various properties of the fish peptone as compared to the untreated (control) sample. The fish peptone sample was divided into two parts; one part was subjected to Mr. Trivedi’s biofield treatment, coded as the treated sample and another part was coded as the control. The impact of biofield treatment was analysed through various analytical techniques and results were compared with the control sample. The particle size data revealed 4.61% increase in the average particle size (d50) along with 2.66% reduction in the surface area of the treated sample as compared to the control. The X-ray diffraction studies revealed the amorphous nature of the fish peptone sample; however no alteration was found in the diffractogram of the treated sample with respect to the control. The Fourier transform infrared studies showed the alterations in the frequency of peaks corresponding to N-H, C-H, C=O, C-N, and C-OH, functional groups in the treated sample as compared to the control. The differential scanning calorimetry data revealed the increase in transition enthalpy (ΔH) from -71.14 J/g (control) to -105.32 J/g in the treated sample. The thermal gravimetric analysis data showed the increase in maximum thermal degradation temperature (Tmax) from 213.31°C (control) to 221.38°C along with a reduction in the percent weight loss of the treated sample during the thermal degradation event. These data revealed the increase in thermal stability of the treated fish peptone and suggested that the biofield energy treatment may be used to improve the thermal stability of the heat sensitive compounds.

The fisheries industry is a major source of income for various countries worldwide. However, the industrially processed fish that is utilized for human consumption yields more than 3.17 million tons by-products per year [1]. These by-products require proper disposal and hence creates the huge revenue loss to the seafood industry [2]. Therefore, the emphasis was done to find the new uses for these waste by-products. In recent years, several advancements in biotechnology field utilize the marine by-products and convert them into some product of interest [3]. It includes their conversion in protein isolates and hydrolysates having functional food properties and natural food antioxidants [4]. The protein converts into smaller peptides through enzymatic conversion and their breakdown products yield protein hydrolysates. Many researchers have reported the biological activity and nutritional values of protein hydrolysates through their bioactive peptides [5,6].

The peptones are a mixture of polypeptides and amino acids that are used in several biotechnological applications. They are derived from the acid or enzymatic hydrolysis of natural products such as bovine or porcine meat, milk, yeasts, and plants. The peptones are mainly used in the production of media for fermentation, tissue culture, and vaccine stabilizers [7]. The main source of peptone is animal tissues; however it faces the problem of bovine spongiform encephalopathy, a neurodegenerative disease and commonly known as mad cow disease. The main cause of this disease is a specific type of misfolded protein, prion and transmitted to the healthy animals through infected sheep and goats [8]. The problems related to animal tissue peptones and their increased demand as raw material focuses the attention towards fish peptones due to their non-meat origin, free from swine-flu, and inexpensive, as derived from fish by-products [9,10]. Further researches proved fish peptone as a source of high protein and a balance of amino acids, hence used as the main source of industrial peptones. The peptones as a source of nitrogen become the most expensive part of growth media in the fermentation industry [11]. Besides, during processing such kind of products are subjected to various thermal treatments to inactivate the antinutritional factors, remove allergens, and to obtain the required solubility and texture [12]. However, they may face the problem of some conformational changes due to their thermal denaturation during heating that might affect their solubility, stability, and shelf-life [13,14]. Therefore, it creates the need for some alternative strategies that may help to improve the stability related issues of this compound in a cost-effective manner.

The biofield energy treatment was reported as a measure for increasing the thermal stability of some organic products [15]. It is a putative form of energy that surrounds the body of all living organisms and can be exchanged with the environment [16,17]. A human can harness the energy from the environment or universe and can transmit it to any living or non-living object. The object(s) will receive the energy and respond to useful way, this process is termed as biofield treatment. It is reported for the efficacy and benefits in cancer and arthritis patients [18,19]. Moreover, Mr. Trivedi is also well known for his unique biofield energy treatment, The Trivedi Effect®. It was reported for its impact on the plants [20], microorganisms [21], and culture medium [22]. Hence, the present work was aimed to treat the fish peptone by Mr. Trivedi’s biofield energy and evaluate the impact on the physicochemical properties and stability of the fish peptone using various analytical techniques viz. particle size analyser, surface area analyser, X-ray diffraction, Fourier transform infrared spectroscopy, UV-visible spectroscopy, differential scanning calorimetry, and thermogravimetric analysis.

The fish peptone was procured from HiMedia Laboratories, India. In treatment methodology, the fish peptone sample was divided into two equal parts in which one part was coded as the control and another part as the treated. The treated part was handed over in sealed pack to Mr. Trivedi under standard laboratory conditions. Mr. Trivedi provided the biofield energy treatment to this part (treated) through his unique energy transmission process, without touching the sample. The control part was kept untreated. The impact of biofield treatment on the treated sample was subsequently analysed as compared to the control sample using various analytical techniques.

The SYMPATEC HELOS-BF laser particle size analyser was used for the determination of particle size of the control and treated samples. The analyser was having a detection range of 0.1 μm to 875 μm. The parameters determined in the analysis were d50 (average particle size) and d99 (size below which 99% of the particles are present).

The Brunauer-Emmett-Teller (BET) surface area analyser, Smart SORB 90 was used to calculate the surface area of the control and treated samples.

The X-ray powder diffractograms were recorded using Phillips Holland PW 1710 X-ray diffractometer that uses 1.54056Å wavelength of radiation. The X-ray generator was operating at 35kV and 20mA and equipped with a copper anode with nickel filter. The diffractograms of control and treated samples were analysed to determine the nature of the sample, i.e. crystalline or amorphous and XRD of treated sample was compared with the control to analyse any difference between them.

The UV-Vis spectral analysis was carried out using Shimadzu UV-2400 PC series spectrophotometer. The spectra of the control and treated samples were recorded using 1 cm quartz cell that has a slit width of 2.0 nm.

The DSC analysis of control and treated samples was carried out using model Perkin Elmer/Pyris-1. The samples were heated at a rate of 10°C/min under air atmosphere (5 mL/min). The thermograms were collected over the temperature range of 50°C to 300°C. Any differences in the transition temperature and transition enthalpy were recorded from the thermogram to determine the impact of biofield energy treatment on the treated sample with respect to the control.

The thermal stability profile of fish peptone was analysed using Mettler Toledo simultaneous thermogravimetric analyser (TGA/DTG). The temperature range was selected from room temperature to 400ºC and a heating rate of 5ºC/min under air atmosphere. The impact of biofield treatment was analysed by comparing the pattern of degradation, maximum degradation temperature, and percent weight loss of the treated sample as compared to the control sample. 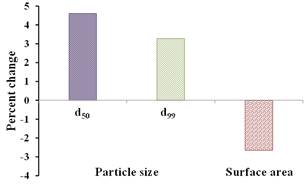 Fig. 1. Percent change in particle size and surface area of the treated fish peptone as compared to the control.

The particle size analysis data depicted that the d50 and d99 were 23.44 and 120.17 μm, respectively in the control sample. However, in treated sample, the d50 and d99 were found as 24.52 and 124.11 μm, respectively. The percent change observed in the particles sizes of the biofield treated sample with respect to the control is depicted in Fig. 1. It revealed that d50 was increased by 4.61%, and d99 was increased by 3.28% in the treated sample as compared to the control. The protein molecules have a tendency to aggregate through the weak interactions [23]. Moreover, the temperature has a significant impact on the aggregation rate [24]. Hence, it is assumed that the biofield energy treatment might provide some energy to the sample that resulted in the slight increase in the particle size of the treated sample through the process of aggregation.

The X-ray powder diffractograms of control and treated samples of fish peptone are shown in Fig. 2. The XRD pattern of the control sample did not contain any diffraction maxima, which indicated that the molecules were internally disordered and glassy in nature. The glassy material showed one broad peak that resulted due to short range ordering of the molecules as compared to the long-range order in a crystal [26]. The diffractogram of the treated sample also showed similar XRD pattern indicated that biofield energy treatment may not cause any alteration in the ordering of the molecules of fish peptone sample. 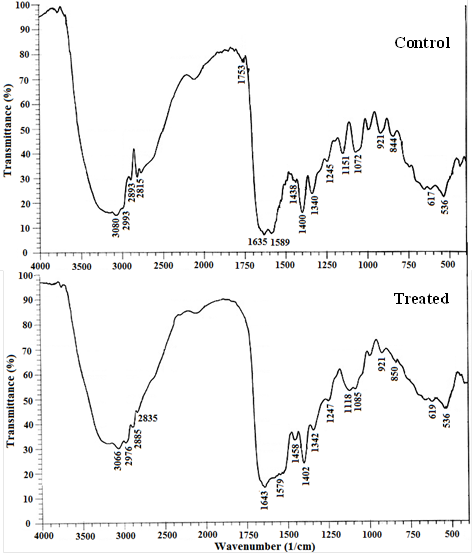 The observation showed the alterations in the frequency of several peaks in the treated sample such as N-H, C-H, C=O, C-N, C-OH, etc. as compared to the control. It revealed that the biofield energy treatment might have an impact on the bond length, bond angle, or dipole moment of the corresponding functional groups in the treated sample. However, further analysis is required to determine the effect of biofield energy on the particular functional group and its impact on the properties of fish peptone sample.

The UV spectrum of control sample showed the absorption peak at λmax equal to 258 nm. The biofield treated sample also showed absorption peak at similar wavelength i.e. 259 nm. It showed that the biofield energy treatment had not affected the HOMO→LUMO transition within the components of fish peptone sample. 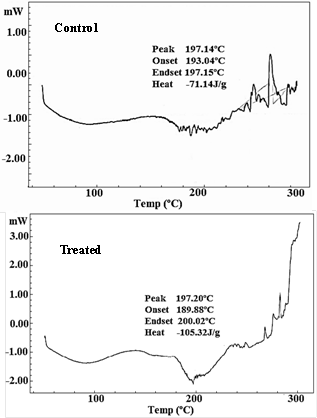 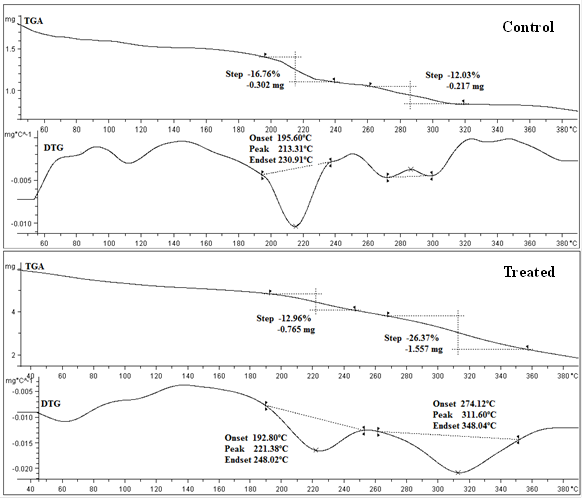 The authors would like to acknowledge the whole team from the Sophisticated Analytical Instrument Facility (SAIF), Nagpur and MGV Pharmacy College, Nashik for providing the instrumental facility. Authors also greatly acknowledge the support of Trivedi Science, Trivedi Master Wellness and Trivedi Testimonials in this research work.