Abstract: Vaginal discharge in women is sometimes caused by candida or aerobic bacteria organisms like E. coli, staphylococcus aureus, and β- haemolytic streptococcus. Culture and sensitivity testing are done from high vaginal swab (HVS) specimen collected from women who come to the clinic complaining of vaginal discharge. Isolation and antibiotic sensitivity of these organisms are key to the successful treatment of the cause of vaginal discharge. This study tends to evaluate the microbial and antibiotic sensitivity pattern of high vaginal swab culture results in the Sekondi-Takoradi metropolis of the Western region of Ghana. This is a 3-year retrospective study conducted in the Public Health laboratory of Effia-Nkwanta Regional Hospital. Records of HVS culture and sensitivity results for 2010-2012 were retrieved and reviewed. A total of 3783 culture and sensitivity results were reviewed. 1483 yielded no growth of pathogenic organisms. Candida species were the predominant microbial organism, 63.2% (1455/2300). Bacteria identified were mostly the aerobic types (845); with Escherichia coli being predominant, 29.9% (235/845), while Morganella morgani was the least bacteria, 0.2% (2/845). Adult women (20-50) had the most pathogens isolated from them, with 79.9% of candida (1047/1455) and 71.2% of the aerobic bacteria (602/845). The least organism isolated was seen in the elderly and children, with 6.3% (92/1455) of candida, 9.7% (82/845) of aerobic bacteria and 6.9% (101/1455) of candida and 8.04% (68/845) of aerobic bacteria respectively. The cephalosporins showed the best antibiotic sensitivity. Candida spp. and aerobic bacteria were the predominant microbial organisms identified from HVS results in the Sekondi-Takoradi Metropolis. Proper laboratory diagnosis to identify causative organisms is vital for optimal therapeutic outcome.

Infections of the genitourinary tracts or reproductive tract infections are a major problem of women’s sexual health. They are commonly seen in women of reproductive age and usually present with vaginal discharge [1]. They include sexually transmitted infections (STI), bacterial vaginosis (BV), aerobic vaginitis and candidiasis [2]. Sexually transmitted diseases in women occur when there is an introduction of sexually transmitted organism into the vagina, mostly through sexual activity [3]. It is a major problem for women of reproductive age all over the world. It poses a major challenge to female sexual health, especially in women in developing countries in Africa [4]. WHO estimated that 75% to 80% of all new cases of sexually transmitted diseases are in developing countries [5]. The majority of these diseases are the four most common ones like gonorrhea, Chlamydia, syphilis and tricomoniasis [5].

Bacterial vaginosis is the invasion of the vagina with anaerobic bacteria organisms. It occurs when there is alteration of the vaginal ecology with gross depletion of the normal bacteria flora lactobacilli with overgrowth of anaerobic polymicrobial organisms [6,7]. It is the commonest form of vaginal infections in women of reproductive age [8]. It constitutes almost 40% of cases in women attending sexually transmitted disease clinic [9-11]. In pregnant women, it constitutes almost 30% of all cases [12,13]. The common organisms implicated in bacterial vaginosis include Gardnerella vaginalis, Mycoplasma hominis, and anaerobic bacteria such as Peptostretococci, Prevotella spp, and Mobiluncus spp [14].

Aerobic vaginitis is the accumulation of aerobic organisms, such as E coli, Group B streptococci, etc., in the vagina [15-17]. It is a term used to refer to vaginal flora abnormality distinct from bacterial vaginosis [15]. Aerobic vaginitis, like bacterial vaginosis, causes depletion of normal bacteria flora lacto bacillus. . It is clinically characterize with red and inflamed vagina, yellowish vaginal discharge with burning sensation and dyspareunia [15]. It has been implicated in pregnancy complications, preterm delivery, preterm rupture of membrane and ascending chorioamnionitis [18].

Candidiasis is a fungal infection which affects the oral mucosa and the genital tract. Candida albicans is the commonest candida species implicated in about 80% of vaginal yeast infections, while the remaining is between candida glabrata and tropicalis [19]. Vaginal yeast infection or candidal vulvovaginitis is the commonest cause of vaginal discharge outside the STI and BV, and most adult women would have experience this infection at least once in their life time [19].

Study was done in the public health laboratory in Effia Nkwanta regional hospital, Sekondi-Takoradi of the western region of Ghana.

Effia-Nkwanta Regional Hospital is a secondary health-care institution and is the only referral hospital for the whole western region, located in the south-western part of Ghana in the Sekondi-Takoradi metropolis. It serves all other hospitals within the entire 22 districts of the western region and sub-divisions of 13 major districts. Sekondi-Takoradi is within the Shama-Ahanta east and west metropolitan area. It is the administrative capital of the Western Region with land area of 385 square kilometres, about 242 kilometres to the west of Accra, the capital city of Ghana. The region is approximately 280 kilometres from Cote d'Ivoire border and has an estimated population of roughly 335, 000. It is presumed to be Ghana's third largest city with industrial and commercial centres, as well as tourist interests.

The retrospective study was carried out in the public health laboratory. High vaginal swab culture and sensitivity records from 2010 to 2012 were collected.

High vaginal swabs specimen were received from patients seen within the hospital either on admission or from gynecology outpatient department, and from other peripheral hospitals and clinics within the metropolis. In either case, specimens were collected by trained nurses and patients were instructed to go quickly to the Public Health laboratory. On arrival at the public health laboratory, patients demographics were collected, and few drops of normal saline added to the collected specimen for microbial examination. Specimens were then inoculated into blood agar and/or chocolate agar, prepared from nutrient broth (Tulip Diagnostic Limited, India). Standard culture and sensitivity procedures were followed and the results interpreted by a Microbiologist [22].

Only pathogens isolated and identified were reported in the results. Normal vaginal flora were not reported and designated as "no pathogen isolated".

All data were double entered into Microsoft excel, spread sheet and SPSS. Frequency distribution was done for all variables using the SPSS version 21.

Approval was granted for this work from the office of the Western Regional clinical coordinator of the Ghana Health Service, Sekondi-Takoradi. 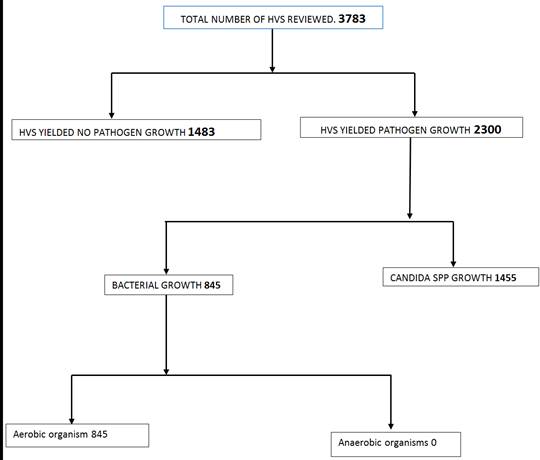 This is a retrospective review of the HVS culture and sensitivity of women who attended the Effia-Nkwanta Regional Hospital, Sekondi-Takoradi metropolis, Ghana from 2010 to 2102.

Candida species were the most prevalent organisms isolated in this study. This result is in line with and similar to reports from other hospital based studies [26,27]. High vaginal swab culture among children yielded one of the least growths for candida species. Low prevalence of vaginal candidiasis in children is an expected finding, since there are low levels of estrogen resulting in a preponderance of anaerobic vaginal flora which antagonizes the growth of candida organisms [28-30]. Low estrogen level can also explain the low levels of candida species isolated among the elderly in this study, as vaginal candidiasis is mainly a disease more common among premenopausal woman [31].

It is very interesting to note that the HVS culture in this study yielded only aerobic organisms typically seen in cases of aerobic vaginitis [15,16]; and no anaerobic organisms as seen in bacterial vaginosis. Aerobic vaginitis is very much distinct from bacteria vaginosis, as the pathogenic organisms’ composition and clinical presentation are very much different [15]. Though both can be associated with vaginal discharges, aerobic vaginitis is marked with clinical signs of inflammation presenting as yellowish discharge and vaginal dyspareunia [15]. However, in both conditions, there are depletion of lactobacillus and lactate in the vagina [15]. There is also a clinical possibility of a mixture of both infections in a woman as evident by both aerobic and anaerobic organism in the vaginal exudate [15].

Escherichia coli was the predominant aerobe followed by staphylococcus aureus. This is in contrast with some study that showed staphylococcus as the predominate species [15,16]. However, both Escherichia coli and Staphylococcus aureus are very much associated with aerobic vaginitis, as they are very often isolated in aerobic vaginitis than in the normal flora [15]. In contrast to findings of most studies, Proteus spp were isolated at a relatively higher frequency in this study. Proteus organisms are bacteria associated with urinary tract infection and strongly linked to pyelonephritis, kidney stones and fever [32,33]. The reason for this observation is not very clear, and necessitates further studies. Vaginal pathogens were found to be more in adult women between the ages of 20-50. This is a well reported finding in several other studies [15,16,34]. Although adult women have lactobacillus in their vaginal flora which serves as check for other pathogenic organisms, other activities of these women like sexual activities and indiscriminate use of antibiotics can predispose them to vaginal infections [16,35].

Penicillin resistance was also observed in this study, as ampicillin and penicillin had only 17% sensitivity for Escherichia coli, 28% for staphylococcus and 54% for β-haemolytic streptococcus. The penicillins are widely prescribed and often misused, in addition to the production of β lactamase by staphylococcus and other various bacteria, has lead to their resistance, as observed in this study. Penicillin and tazobactam (β lactamase inhibitor) combination would rather yield a better anti-bacterial effect [16,36].

The study showed candida and aerobic bacteria as the predominant pathogens isolated. It also shows that some women had no pathogen isolated from their HVS culture result. It is important to note that vaginal discharges in some women are not caused by pathogenic organisms. It is possible that some women who come to hospital with vaginal discharge are treated with empirical antibiotics without relying on culture and sensitivity. As evident from the this study, this practice should be discouraged, as this will lead to unsuccessful treatment, frequent visits of these women to hospital, drug resistance and other medical and social problems.

There are obvious limitations to this study, as it is only a retrospective review that did not capture the medical conditions and clinical presentations of these patients. A prospective and clinical study will be required to complement this effort for a more comprehensive understanding of the vaginal pathogen distributions among women in this region.

Authors declare that they have no competing interest.

ORISH Verner conceived, planned, executed the study and drafted the manuscript as well as analysis of data; Jones Ofori-Amoah edited/reviewed and revised the manuscript; Mahama François and Bruku K. Silverius imputed the data into SPSS software and contributed to analysis of the data; Ebenezer K Mensah outlined the methodology involved in HVS collection and investigation, and also contributed in drafting the manuscript. All authors have read and approved the final manuscript.

Authors wish to thank the staff of the Public Health Laboratory–Effia Nkwanta Regional Hospital for their cooperation, and to our research assistants that collected the data from the records.