Abstract: Methicillin Resistant Staphylococcus aureus (MRSA) is a major health problem worldwide. Diseases caused by these microorganisms most often are difficult to treat consequently, present with severe outcomes. Despite the increase association of MRSA in most hospital acquired infections, surveillance systems to control the spread of these infections are lacking especially in the developing countries. The present study is part of a major study developed to trail the incidence of multidrug resistant pathogens in clinical settings using available resources, with the aim to gather relevant data for the management and control of nosocomial infections. The specific objective of the current study is therefore to determine the prevalence and antimicrobial susceptibility of MRSA isolates from one of the largest hospitals in the country. This was a hospital based cross sectional study involving 114 participants, conducted between March and June 2016. Various clinical specimens were inoculated on to blood agar and mannitol salt agar and incubated at 35-37°C aerobically for 18-24 hours for the isolation of S. aureus. Isolates were identified using the catalase and coagulase tests. Sensitivity testing was done using the Kirby Bauer disk diffusion method. Data were analysed using SPSS version 20.0. Out of 114 samples analysed, S. aureus was isolated from 33 (28.95%) while MRSA was detected in 15 (13.16%). Antimicrobial susceptibility testing revealed high resistance (80-100%) to penicillins and no resistance to amikacin, lincomycin and ofloxacin. Multidrug resistance to at least three antibiotics was also observed among MRSA isolates. MRSA and multidrug resistant S. aureus are common in the study site. Therefore, there is a need for the improvement of surveillance systems to monitor and curb the spread of these resistant pathogens.

Methicillin resistant Staphylococcus aureus (MRSA) has been reported as a common cause of hospital and community acquired infections worldwide [1, 2]. Infections caused by these microorganisms present with severe outcomes and often involves prolonged hospital stay, long-term disability, increased resistance of microorganisms to antimicrobials, additional financial burden for health systems, high costs for patients and their family, and unnecessary deaths [3]. MRSA strains exhibit resistance to oxacillin or methicillin and other antimicrobial agents and this has been used in the diagnosis of these strains [4, 5]. The emergence of resistance in these strains of S. aureus is mediated by a change in penicillin binding protein (PBP2a) which is encoded by the Mec A gene, resulting to strains with multiple resistance to various antibiotics [1, 6].

Staphylococcus aureus has been previously implicated in different infections including genital, skin, bone, ear, urinary tract, and post-operation wounds [2, 7, 8]. The increasing prevalence of MRSA multiple-drug resistant strains is a limitation to the treatment and management of MRSA associated infections. Consequently, MRSA are increasingly being recognised as major public health threat both in the developed and developing setups. In spite of the availability of a diversity of antibiotics for the treatment of staphylococcal infections, the prevalence of MRSA-associated infections remains on the increase. According to National Nosocomial Infection Surveillance in USA, the occurrence of MRSA causing nosocomial infection has increased from about 2.0% in 1974 to 22.0% in 1995 and then to 63.0% in 2004 [9].

The World Health Organization (WHO) recommends continuous surveillance as a means of controlling the spread of diseases caused by resistant pathogens [3]. Such systems of tracking diseases are lacking in most developing countries. In the absence of such surveillance systems, data from prevalence studies may be helpful. In Cameroon, there has been an increase in the prevalence of MSRA from 21.3% in 2003, 13.8% in 2013 and 72% in 2015 [7, 10, 11]. As such there is a need to track the occurrence of these pathogens. The present study is part of a major study which is focused on monitoring the incidence of multidrug resistant pathogens in clinical settings with the aim to gather relevant data for the management and control of nosocomial infections. The specific objective of the current study is therefore to determine the prevalence and antimicrobial susceptibility of MRSA isolates from one of the largest hospitals in the country.

The present study was a hospital-based cross-sectional study conducted on both in and out patients attending the Laquintinie Hospital from March to June, 2016. This hospital is a referral hospital located in the economic capital of the Nation and as such, it serves patients from all over the country.

Ethical clearance for this study was obtained from the Littoral Regional delegation for Public Health. All participants were issued consent forms and only those who consented were enrolled into the study.

A total of 114 consented participants who presented with varied skin and soft tissue infections were recruited into the study. Specimens such as pus, ear discharges, urine, genital and throat swabs were collected aseptically and transported at +4°C to the Microbiology laboratory within two hours of collection for analysis.

2.4.1. Isolation and Identification of S. aureus

Each sample was inoculated unto mannitol salt agar (MSA) and blood agar (BA) and the plates were incubated at 37°C for 24 hours [5]. Plates were observed for characteristic yellow colonies on MSA and beta (β) haemolysis on BA. Isolates were Gram stained and identified using the catalase and coagulase tests. Methicillin resistance was assessed by determining the resistance profile of S. aureus isolates to oxacillin [5]. 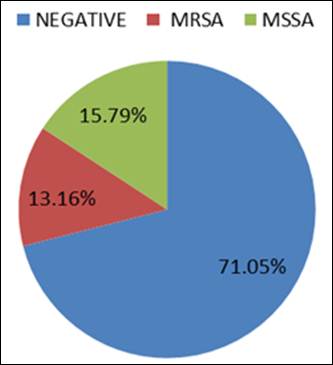 3.3. Occurrence of MRSA with Respect to Demographics Factors

The prevalence rates of MRSA according to age, gender, sample type and ward is shown on Table 1. MRSA isolation was more common in men and in individuals aged 21-40 years (66.67%). Majority (86.67%) of the MRSA were isolated from pus while no isolates were obtained from urine and throat swabs. Most (60%) of the MRSA were isolated from patients in the surgical wards compared with other wards. However, these differences were not statistically significant (P > 0.05).

Table 1. Distribution of MRSA isolates according to age, gender, type of sample and ward.

3.4. Distribution of MRSA with Respect to Some Predisposing Factors

The highest MRSA isolates 66.7% (n=10) were from patients with a hospital duration of more than 10 days (P=0.94) (Table 2). Participants with history of antibiotic use recorded the highest number of isolates for MRSA 100% (n=15) P=0.85, individuals who used antibiotics frequently and those who used non prescribed antibiotics recorded highest number of MRSA isolates of 53.33% (n=8) P=0.88 and 86.7% (n=13) P=0.92 respectively. All the p values were statistically insignificant.

Table 2. Distribution of MRSA with respect to some predisposing factors.

The overall prevalence rate of Staphylococcus aureus was 28.95% which is commensurate to previous reports [13], but higher than the rates observed in India [14,15], Bangladesh [16], and Yaoundé [7]. In contrast, higher rates of prevalence were reported in Nigeria [17], Ethiopia [18, 19, 20, 21], Congo [22], and Iran [23, 24]. In the present study, the prevalence of MRSA was 13.16% while that of MSSA was 15.79%. This is higher than the 5.26% reported in Peshawar, Pakistan [25] and lower than those in other previous reports [7, 13, 18, 19, 21]. This variation in the prevalence of MRSA could be attributed to differences in sample size, sample type and the laboratory procedures employed. It could also be due to differences in the biological characteristics of the S. aureus strains, and/or infection control practices.

Although there was no significant difference in the isolation of MRSA with respect to gender, age, specimen type and ward, MRSA was isolated more from men (53.33%) than females (46.67%). This observation is in agreement with a previous study carried out in Peshawar, Pakistan [25, 26]. The high occurrence of MRSA in pus compared with other specimens has also been reported [27]. This is probably due to the fact that S. aureus is a common pathogen of the skin [2]; hence, more skin specimens were obtained.

In the present study, the highest resistance of MRSA isolates was observed against the penicillins. This is obvious as most Gram-positive bacteria have acquired the genes for beta lactamase production. However, resistance against amoxicillin was lower (66.6%) compared with other penicillins (80-100%). These findings are in agreement with reports in Sudan and Cameroon, respectively [1, 7]. No resistance was observed against lincomycin, amikacin and ofloxacin. Lincomycin and amikacin are drugs which are not commonly used but reserved for severe infections and infections caused by multidrug resistant pathogens. The fact that these drugs are not commonly used in our setup may explain the absence of resistance.

Resistance to fluoroquinolones is emerging among Gram-positive bacteria and it is mediated by changes in the bacterial target enzymes DNA gyrase and topoisomerase IV, which reduce drug binding, and by action of efflux pumps on the bacterial membrane [28, 29, 30]. The zero resistance to ofloxacin observed in the present study could be due to the fact that these bacteria have not developed these mechanisms. Multidrug resistance was observed amongst MRSA isolates. Most isolates exhibited resistance to at least three antibiotics. This observation is consistent with previous findings in which MRSA showed multidrug resistance to at least two antibiotics [21], and the isolates presented with 18 different resistance patterns [7].

It was also noted from the present study that participants with longer hospital stay recorded a higher (66.7%) prevalence of MRSA than outpatients (13.3%). This difference may be due to sampling bias since fewer outpatients participated in this study. These findings are in accordance with similar findings in Scotland that recorded a higher prevalence for MRSA among individuals with prolonged hospital stay [31]. This can be attributed to the fact that longer hospital stay increase chances of coming in contact with different pathogens especially when hygiene and sanitation measures are not well implemented. Moreover, participants with history of antibiotic use, those who use antibiotics frequently and those who use non-prescribed antibiotics recorded a MRSA prevalence of 100%, 53.3% and 86.7% respectively. These findings correspond with findings in Scotland where participants with great antibiotic exposure and use of non-prescribed antibiotics recorded higher MRSA prevalence [32].

The prevalence of isolation of MRSA from clinical specimens in the present study was 13.16%. Antimicrobial susceptibility testing revealed high resistance (80-100%) to penicillins and no resistance to amikacin, lincomycin and ofloxacin. Multidrug resistance was also observed among MRSA isolates. There is need for the improvement of surveillance systems to monitor and curb the spread of resistant pathogens.