Iodine is very important for the proper functioning of the thyroid gland. The thyroid gland in the neck secretes a hormone called thyroxine, of which iodine is an important element (Walker, et al., 2007). Both insufficient and excessive iodine intake can result in thyroid disease. The term "iodine deficiency disorders" refers to the several consequences that iodine deficiency imposes on individuals. (Zimmermann, 2009). In areas where the daily iodine intake is <50 μg, goitre is usually endemic (Vandam, 2001). A higher incidence of nodular goitre and less differentiated types of thyroid carcinoma have been observed in iodine deficient regions (Zonenberg, et al., 2007).

Iodine deficiency gives rise to hypothyroidism, symptoms of which are extreme fatigue, goitre, mental slowing, depression, weight gain, and low basal body temperatures (Felig and lawrence, 2001).Iodine deficiency disorders (IDD), which can start before birth, jeopardize children’s mental health and often their very survival. Serious iodine deficiency during pregnancy can result in stillbirth, spontaneous abortion, and congenital abnormalities such as cretinism, a grave, irreversible form of mental retardation that affects people living in iodine-deficient areas of Africa and Asia (WHO, 2004).

Iodine deficiency is a significant public health problem (Andersson et al., 2005). According to WHO, in 2007, nearly 2 billion individuals had insufficient iodine intake, a third being of school age. (WHO, 2008). In March 2006, iodine deficiency remained a serious public health problem in the developing world. Iodine deficiency is also a problem in certain areas of Europe. In Germany it has been estimated to cause a billion dollars in health care costs per year (Patrick, 2008). Lacking in iodine during human development causes a fall, in average, of 12 IQ points in China (Qian, et al, 2005). In developing countries, iodine deficiency has been identified as one of the modifiable factors that have an adverse effect on child development (Walker, et al., 2001)

Iodide is well absorbed from the intestine and is rapidly excreted by the kidney. The most sensitive method for evaluation of IDD control program is the determination of urinary iodine excretion (WHO, 2001). A 24-hour urine iodine collection is a useful medical test, as approximately 90% of ingested iodine is excreted in the urine.Iodine deficiency is treated by ingestion of iodine salts, such as found in food supplements. Mild cases may be treated by using iodized salt in daily food consumption, or drinking more milk, or eating egg, yolks and saltwater fish (Griffing, 2009).

The aim of this study is to determine of iodine deficiency inShendi area and detection of water supplements' role on iodine intake in study area.

Random sampling technique was used. Shendi town was divided into four geographical zones: north, south, east, and west. From each zone two schools (boys& girls) were selected. Samples were collected in the period from January to February 2009.

2.  Laboratory investigations: Sandell- kolthoff reaction was done to determine the urinary iodine excretion. Initially the urine is digested in strong acid at high temperature; thereafter the color change of ammonium sulfate with another substance (arsenic acid) is accelerated by iodine as catalyzing agent. The speed of the change in color depends on the iodine concentration. Comparing to standard solution with known iodine content was performed with colorimeter. This reaction, which is called the Sandell-Kolthoff reaction(WHO,2001), has been diagramed as follows:

The Ceric ion has a yellow color, while the Cerous is colorless.

3.  Colorimeter was used for estimation the urinary iodine concentration.

To each urine sample a few drops of formalin were added and then kept refrigerated until were delivered to the laboratory after one week to determine the urinary iodine excretion.

The WHO, 2001 standards were utilized to demonstrate the whole sample iodine status. According to this criteria there was 2.6% of cases had severe iodine deficiency (<2µg/dl). Moderate (2 - 4.9µg/dl) and mild (5 - 10µg/dl) iodine deficiency were found in 4.5% and 16.4% of the study sample respectively. There for 68.6% of the study sample was found to have urinary iodine concentration of 10 - 30 µg/dl which is normal and 7.9% had concentration more than 30µg/dl. Urinary iodine excretion in schoolchildren of the four geographical zones it is evident that most cases had a urine iodine concentration of (10 - 30µg/dl) which is normal (Figure 1 & Figure 2).

Figure 1. Urinary iodine concentration of study area according to WHO scales. 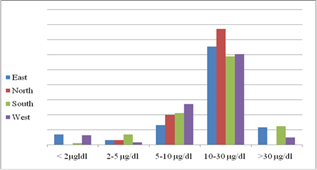 Figure 2. Urinary iodine concentration in schoolchildren according to zones.

The concentration of some minerals and anions that affect the iodine metabolism in water samples from four study area (Table5).

Table 2. The mean and standard deviation of urinary iodine excretion according to gender.

Table 3. The urinary iodine concentration according to WHO scales between both sexes.

Table 4. The mean and standard deviation reference with age.

Table 5. The concentration of some minerals and anions in water sources samples.

The selection of Shendi area to conduct this study was attributed to the medical observation that there were a lot of cases of goiter and thyroid disorders in Shendi hospitals. The area was divided into four zones; north, east, south and west from which samples were selected randomly for determination of urinary iodine concentration.

In most cities, surface water is the main source of drinking water. Treatment and disinfection of this water are rather problematic, which contain high levels of minerals salts in contrast to the River Nile water. Drinking water of study areas contained some goitrogenic minerals; fluoride, nitrate, potassium, magnesium and calcium. Although were found in small concentration but were affective on long time, and were attributed to induce highurinary iodine excretion among schoolchildren of study sample. The erroneous usage of toothpaste especially during childhood may take place in the increment of fluoride effect the iodine metabolism and consequent may causes increase in highurinary iodine excretion among schoolchildren.

Most of schoolchildren (68.6%) had normal urinary iodine excretion23.5% were suffering from iodine deficiency and 7.9% had urinary iodine excretion more 30 µg/dl. Some goitrogenic minerals and anions (such as F- and NO3-) were concentrated in the water sources of study area.Attempts should be made to reduce the effect of goitrogenic minerals in water sources of study area. Identifying the goitrogenic-containing foodstuff and organizing their consumption.