Abstract: Forced outage of generators due to stator winding insulation failure can result in significant financial loss because of the high cost repair and loss of production. In recent years, the demand for insulation diagnosis is increasing to prevent unexpected failures, as the capacity of generators has increased. Insulation diagnosis is composed of the insulation resistance measurement, polarization index measurement, dissipation factor (DF) tip-up test, AC current increasing ratio measurement, and the partial discharge (PD) measurement. In this paper, the results of the PD measurement and PD pulse pattern analysis performed on a healthy generator and two generators that experienced dielectric breakdown failure during operation is presented.

Defects in the insulation system of generator stator windings can be produced during manufacturing or due to thermal, mechanical, electrical, or chemical deterioration when the generator is operated for a long time. With insulation degradation due to a combination of such operating stresses, voids can be formed inside the insulation material, and dielectric breakdown may eventually result from partial discharge activity [1-3].

A forced outage of a generator during operation due to dielectric breakdown of the stator windings requires long repair time and hence results in enormous economic loss. Therefore, the importance of insulation diagnosis that evaluates the soundness of generator stator winding insulators is increasing. There exists a dielectric strength test method for verifying whether dielectric strength is sufficient by applying 2E + 1kV (E : rated voltage) for 1 minute and checking whether the insulation withstands the voltage without failing. However, such a test method is only used in special cases such as a shop test or an acceptance test for quality assurance of newly manufactured windings and not for maintenance testing of generators in the field. One of the methods for testing the dielectric strength for these generators is a high-potential test, which applies a voltage of 1.25～1.5 times the rated voltage for 1 min, and in South Korea, this test method is only used in limited numbers of cases where the dielectric strength at failure or restoration is evaluated in the field [4-6]. Conventional dielectric tests for generator stator windings use a test voltage lower than the rated voltage and mainly use the insulation resistance measurement, polarization index (PI) measurement, AC current increasing ratio measurement, dissipation factor (DF) tip-up measurement, and partial discharge (PD) measurement [7-9].

Insulation diagnosis tests for generators stator winding with dielectric breakdown due to overheated copper conductors and abraded stator windings with induced external discharge noise of generators is carried out and presented in this paper. The PD patterns measured for normally deteriorated generators are analyzed, and the correlation between the causes of the defects and the PD patterns are shown.

3.1. Failure Due to Copper Conductor Overheating 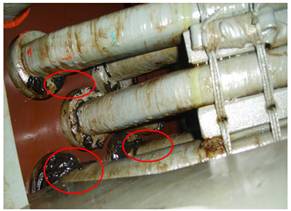 Figure 1. Compound melting due to overheating. 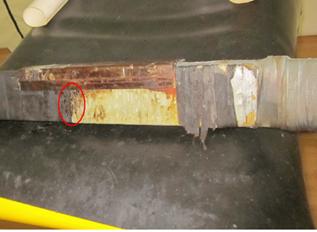 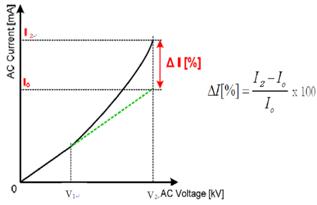 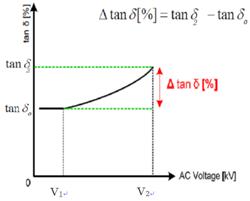 The AC current and DF measurement results at 15kV (phase voltage) were measured in two years prior to the failure. The same voltage of 15 kV was applied to measure the values of ΔI and Δtan δ in order to compare the test results. The results show that both ΔI and Δtan δ increased after the failure, as shown in Table 1. This implies that PD started to occur more than two years prior to the failure, and also implies that the number of voids, which cause discharging within the insulation system, increased because of stator winding thermal overheating.

In the PD measurement, the maximum value of the multiple discharge pulses generated in the insulation system is measured. The largest discharge pulse is assumed to occur at the largest defect point, and the PD measurement is used to measure the level of PD activity in the largest defect in the insulation system. In the measurement, the voltage was 15 kV (phase voltage), and the results are shown in Table 2. The results show that the level of PD increased significantly after the failure and that there was also a change in the discharge pattern. Before the failure, the size and number of the negative discharge pulses, which appeared when the test voltage is positive, were similar to those of the positive discharge pulses, which appeared when the test voltage is negative. However, negative pulses were larger than the positive pulses after the failure due to thermal overheating, as shown in Figure 5. This pattern appears mainly in the gap between the copper conductor and strand insulation [10]. Furthermore, it was found that the insulation was not in good condition because the PD size was close to 30,000 pC or greater [11].

3.2. Failure Due to Vibration on Stator Windings

However, when the generator is started and stopped, the winding insulation is subject to thermal expansion and contraction because of Joule heating, and the resin that holds the stator winding in its position within the slots is separated. This creates a gap between the winding and the slot, and the stator winding starts to vibrate at 120 Hz because of the electromagnetic force of the rotor, further reducing the thickness of the insulation. This increases the length subject to vibration, accelerating the wear process and eventually causing dielectric breakdown. In Figure 6, it can be observed how the semiconducting layer is almost eliminated because of the slot vibration-induced wear on the surface of the stator winding. The semi-conductive layer is used to reduce the partial discharge between the stator winding and the slot [12]. 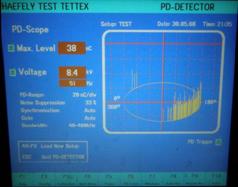 Insulation diagnosis tests were performed on the remaining stator windings except for those that experienced dielectric breakdown. The PD measurement was carried out at rated phase voltage, and the measured PD magnitude and phase pattern is shown in Figure 7. The results show that the PD value was relatively high (38,000 pC), and the PD pattern showed that the positive discharge pulses, which occurred at a test voltage phase angle of 225 °, were produced more than negative discharge pulses, which occurred at 45 °, forming a slot discharge pattern [8, 9]. Most PDs are considered to occur at a gap between the stator winding and the slot, and it was also confirmed that the surface of the stator winding drawn from the slot was also significantly worn, as shown in Figure 6. 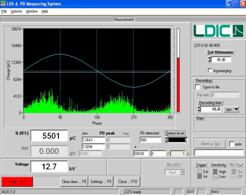 3.4. Noise Occurrence Due to Gap Discharge

The screen of the PD measurement during a PD test on a generator that failed because of overheating in the copper conductor is shown in Figure 9. The location of the preliminary pulses are near 0° and 180°, and the size of the discharged pulses are almost identical. This pulse had a completely different shape with respect to the discharge pattern on insulation systems. This discharge pulse sizes being similar implies that the pulses occurred between particular electrodes. Because external noise pulses were detected in addition to the PD occurring at the electrical insulation, a visual inspection was performed to check the location that produced the noise. As a result, it was found that the contact between two isolated phase bus (IPB) bars, through which the generator output flowed for each phase, and the clip, which connected the two IPB bars to the common plate, was defective resulting in a discharge. This problem was rectified, and a test was conducted. 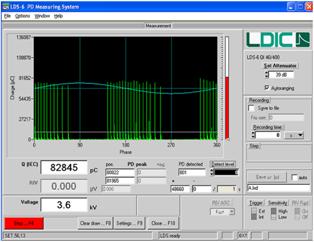 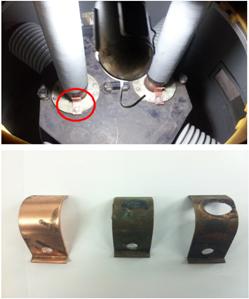 First, the discharge pattern at the time of the dielectric breakdown due to overheating of the winding, which resulted from the loss of coolant for the stator winding, was examined. In this case, the negative pulses were larger and more frequent than the positive pulses. This was a result of a separation phenomenon occurring between the insulating material and copper conductor because of rapid differential thermal expansion between the copper conductor and insulation. Furthermore, when compared to the measurement performed prior to failure, the AC current increasing ratio, dissipation factor, and PD levels all increased, which subsequently led to a rapid deterioration.

Second, a generator manufactured according to the global VPI. method without a side ripple spring that immobilizes the stator winding in a slot was studied. Repeated expansion and contraction occurred when the generator stopped operating, creating a crack between the winding and slot. The generated vibration in the generator impaired the semiconducting layer, which primarily resulted in negative pulses.

Third, the PD pattern of the generator with normal temperature aging appeared to be very similar for positive and negative pulses.

Fourth, the level and status of the discharge pulses occurring in a particular external gap instead of insulation system of the generator appeared to be almost identical.

It was found that the discharge patterns differed depending on the location of the defects in the stator winding. Hence, an analysis of the PD patterns of a generator will be useful in maintenance control and operation according to type of defect.