Abstract: The vortex shedding past a circular cylinder in a two- dimensional channel of varying height is presented in the term of Strouhal number by solving continuity and momentum equations using FLUENT 6.3. The computational grid structure is generated by using Gambit. In this analysis, the result is carried out with blockage ratio b=80, 0.83, 0.85, 0.88 and Reynolds number range from 50 to 300.

The cross flow close to a solid surface is of considerable interest due to their numerous applications in different field including the flow over heat exchanger tubes, seabed pipelines and experimental models in wind tunnel. Efforts have been made by several researchers to understand the effects of solid wall on the flow past a circular cylinder. The experimental studies carried out by Bearman and Zdravkovich [1], Buresti and Lanciotti [2], Angrilli et al. [3], Zdravkovich [4] and Taniguchi and Miyakoshi [5]. Broadly speaking on these studies, they have shown that the vortex shedding is completely suppressed when the cylinder is closer than a critical distance from the wall.

However, almost all the experimental studies are at reasonably higher Reynolds numbers in the range on O(104)–O(105) where turbulence and three-dimensionality are important. Studies at low Reynolds numbers are relatively scarce. The experiential studied to estimate the effects of tunnel blockage on the span wise correlation of the wake of a circular cylinder over a range of Reynolds numbers that varied between 2400 and 4000 was carried out by Blackburn [6]. It was observed that blockage increases the span wise correlation of the wake. Chen et al. [7] gave the numerically simulated a centrally placed cylinder with a focus on the nature and occurrence of the bifurcation from steady symmetric flow to the periodic shedding regime. The effects of a closely placed solid wall was not given due attention. The effect of varying gap between the cylinder and the channel walls was analysed by Zovatto and Pedrizzetti [8]. Sahin and Owens [9] have presented a parameter for study the transition from steady two-dimensional flow to periodic vortex shedding across a range of blockage ratio. They found that the critical Reynolds number for such a transition increased with increasing blockage ratio. At increased blockage ratios, the flow alters significantly with vortices beginning to be shed from both the cylinder and the walls. Rehimi et al., [10] have observed in both two- and three-dimensional studies at a given distance downstream of the cylinder depending on the blockage ratio and the Reynolds number. As for the transition from two-dimensional to three-dimensional flow for a single blockage ratio of 0.20 was studied by Camarri and Gianetti [11] using linear stability analysis and obtained that the inversion had little effect on the types of mode of transition and that the critical Reynolds numbers. Griffith et al. [12] have studied the vortex shedding and three-dimensional behaviour of flow past a cylinder confined in a channel with blockage ration 0.2, 0.33 and 0.5 using spectral-element solver and observed that Strouhal number increases with blockage ratio 0.2, 0.3 and 0.5.

Consider the 2-D flow of air across an infinitely long circular cylinder confined in a channel as shown in Fig. 1. The length and the height of the computational domain are defined in terms of the axial and lateral dimensions

Fig. 1. Sketch of the geometry.

The cylinder is placed at upstream and downstream distances of

, respectively and the total length of the computational domain is

in the axial direction, where

is the diameter of the cylinder.

The equations governing incompressible viscous fluid flow in two-dimensions are the continuity equation and the two components of momentum equation. In absence of body forces and heat transfer, these equations can be expressed in the conservative non dimensional primitive variable form as follows [13]:

The following boundary conditions in their dimensionless forms are used.

The inlet boundary conditions are given by a prescribed parabolic profile,

are the centre line velocity and the distance between the side walls, respectively.

On the circular obstacle: No slip condition is used i.e.

At upper and lower boundaries: No-slip condition of velocity is used i.e.

At the exit boundary: The Neumann boundary condition as:

The simulation studies are carried out for several values of Reynolds numbers (Re), based on the centre line in flow velocity and diameter (D) of the cylinder, and normalized channel height (D/H). The considered values lie in the ranges Reynolds number from 50 to 300 and blockage ratio b=0.83 0.85, 0.88. To validate the solution, we also considered the blockage ratio b=0.2. The parameter space considered in the study is shown in Table 1.

The problem under consideration is solved by commercial software package FLUENT (6.3). The grid is generated by using GAMBIT. The second order upwind scheme is used to discretise convective terms of momentum equations while the diffusive term is discretised by central difference scheme. To validate the solution, calculations is carried out first for the blockage ratio b=0.2. The Strouhal number for different values of Reynolds numbers at blockage ratio 0.2 is plotted in Fig. 2 and compared our results with the results given in Griffith et al. [12]. From these, we noted that the agreement is very good and this verifies the results obtained in the present work. The Reynolds number is defined as

is the diameter of the circular cylinder and

is the kinematic viscosity. The Strouhal number is defined as

is the frequency of vortex shedding. The blockage ratio is defined as

, where H is the width of the channel. 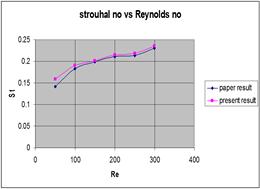 Fig. 2. Variation of Strouhal number with Reynolds number for blockage ratio b=0.2 validation with the result of Griffith et al. [12].

Fig. 3. The variation of Strouhal number with Reynolds number for different values of blockage ratio.

Fig. 4 depicts plots of vorticity for

(b). For the smallest blockage shown,

, the wake bears similarity to the wake behind an unconfined cylinder. Vorticity is pulled from the walls, but only a small amount when compared to the other case. For blockage ratio

, vortices forming on the walls of the channel can be seen being entrained into the vortex street. 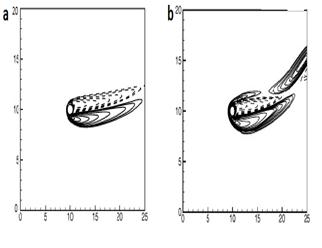 The apparent in the two cases is the inversion of the vortex street; vortices forming on one side of the cylinder finish further downstream on the opposite channel. Also, it can be clearly seen that at low blockage ratios wall boundary layer has strong influence over around the cylinder so that it inhibits vortex shedding. As the blockage ratio increases computation, time required for developing unsteadiness increases.

Fig. 5 shows the streamline patterns at a certain instant for

(b). From the streamline patterns, it is seen that the flow pattern changes at different blockage ratios. 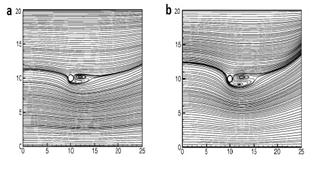 Motivated by the vortex shedding past a circular cylinder which is very useful in many practical applications including the flow over heat exchanger tubes, seabed pipelines and experimental models in wind tunnel in the present paper the effect of blockers ratio 0.80 to 0.9 on the Strouhal number was investigated. The results show that the Strouhal number decreases with increase in block ratio greater than 0.8. This illustrates that for these block ration vortex shedding frequency increases and coefficient of lift oscillates.