Abstract: The purpose of this study is to experimental investigating of the hydrodynamics structure in a cylindrical stirred vessel generated by an eight concave blades turbine. Particle image velocimetry (PIV) system was used to evaluate the effect of the blade turbine in the flow fields. The flow is illuminated by a Nd: YAG 532 nm green pulsed laser source generated in 2x30 mJ. The acquisition of the tow-dimensional images data was taken with a CCD camera with 1600 x 1200 pixels² of resolutions. In addition, a mini-synchronizer was used to control the different PIV components. For the results, we are interested to present the distribution of the velocity fields, the vorticity, the turbulent kinetic energy, the dissipation rate of the turbulent kinetic energy and the turbulent viscosity. Three azimuthally planes were carried out which present the turbine blade plane (θ=30°), the upstream turbine blade plane (θ=10°) and the downstream turbine blade plane (θ=45°).

Therefore, the aim of this research is to optimize the fundamental knowledge of the hydrodynamic structure in a stirred vessel generated by a height concave blades turbine.

Figure 1 shows the cylindrical vessel mounted in a squared vessel which filled by water. The height of the water is equal to the tank diameter (D=300 mm). The turbine diameter is equal to the half of the vessel diameter (d=D/2) and placed in the middle of the tank. Four equally spaced baffles which are placed in 90° from one another were used. Using the particle image velocimetry (PIV), the flow is illuminated by a Nd-YAG 532 nm pulsed laser source. The acquisition of the tow-dimensional images data was taken with a CCD camera with 1600 x 1200 pixels² of resolution. The results were obtained for 170 images. The diameter of the seeding particle was equal to dp=20 µm with 0.15 g of concentration [25-27]. 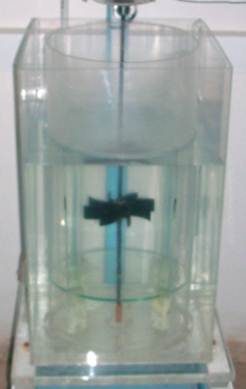 Figure 2 shows the velocity fields of the concave blades turbine. In fact, we present three different planes θ=10°, θ=30° and θ=45°. According to these results, two recirculation loops were observed. The first one is localized in the upper region of the tank near the free surface. However, the second one is localized in the bottom of the tank which is the largest. At the blade end, the velocity is almost radial with some deviation for all configurations. In addition, in the blade plane defined by θ=30° and in the downstream plane blade defined by θ=45°, a vertical velocity has been observed upper the blade. Afterward, near the wall of the vessel, the velocity is divided into the upward and downward flow. Indeed, the lowest mean velocity has been observed in the blade plane defined by θ=30°, where the velocity value is equal to Vm=28.8 mm/s. In the other planes, the mean velocity is almost the same.

Figure 3 shows the normalized RMS velocity distribution of the concave blades turbine. Three different planes defined by θ=10°, θ=30° and θ=45° were presented. According to these results, the lowest values areas are localized in the center of the circulation loop which described with lowest velocity. Otherwise, the high value areas are spreader in the bulk region of the tank. Therefore, they are found in the same direction of the discharge flow. Obviously, the highest values areas are localized around the blade, near the vessel wall and near the shaft. In addition, the highest normalized RMS value is presented in the downstream plane blade defined by θ=45°.

Fig. 4. Distribution of the vorticity.

Figure 5 shows the distribution of the turbulent kinetic energy of the concave blades turbine. In this study, we compare the results in three different planes defined by θ=10°, θ=30° and θ=45°. According to these results, the turbulent kinetic energy presents his maximum at the blade region and decreases progressively moving away from the blade. Furthermore, for the angular position equal to θ=45°, the maximum region is localized above the blade with the same direction of the circulation loop. 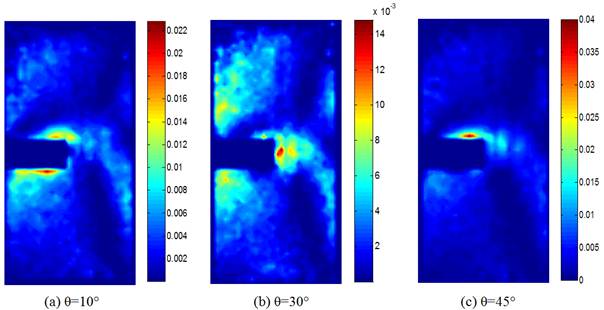 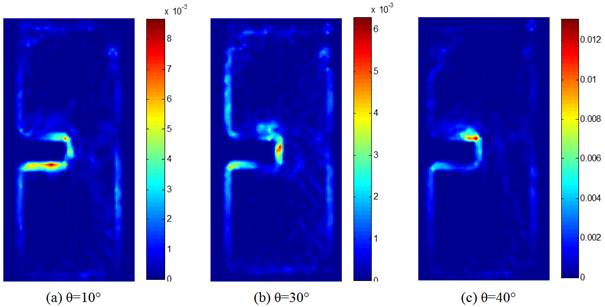 Fig. 6. Distribution of the dissipation rate of the turbulent kinetic energy.

Fig. 7. Distribution of the turbulent viscosity.

In this paper, an experimental investigation of the concave blades turbine was carried out. In fact, three different planes θ=10°, θ=30° and θ=45° have been considered. Several results were presented which describe the velocity field, the vorticity, the turbulent kinetic energy, the dissipation rate of the turbulent kinetic energy and the turbulent viscosity. Particularly, it has been observed that the velocity has the some deviation above the blade region compared to the previous works. Indeed, it is essential to note that the concave blades turbine can improve the stirring operation in the vessels tanks.