Abstract: The prognosis of leptospirosis depends of severity, early diagnosis and prompt intensive treatment. Only few studies estimate the costs in outbreak of leptospirosis. We aimed to assess the cost effectiveness of predicting severity in leptospirosis by retrospective cohort study of 100 consecutive hospitalized patients with leptospirosis (1976-2015). The prices of service, investigations, drugs and no-medical costs were obtained from valid prices-table of the hospital. Total hospital costs per capita for mild, moderate and severe case were 1184 BGL (Bulgarian Lev=0.5 , 2111 BGL and 8044 BGL, respectively (ratio 1 to 1.78 to 6.79). The costs for dialysis of severe cases were equal to the costs for drugs and blood products. We concluded that the predicting of severity could be facilitating the decision for prompt treatment including dialysis, decreases the risk for unfavorable outcome and could be decreasing the hospital costs.

Leptospirosis, the most widespread zoonosis, is emerging as a major public health problem [1]. The disease is caused by spirochetes belonging to the genus Leptospira, which comprises both saprophytic and pathogenic species [2]. The currently used genetically based classification indicates that there are at least 19 species (13 pathogenic and six saprophytic), identified through DNA hybridization analysis [3]. Seven of these species such as L. interrogans, L. borgpetersenii, L. santarosai, L. noguchii, L. weilli, L. kirschneri and L. alexanderi are the main agents of leptospirosis [4].

Leptospirosis is a worldwide zoonosis with global importance [5]. In Bulgaria, leptospirosis is a reportable disease since 1952, when a database and official registration was initiated. A mean annual incidence rate of 0.9 to 3.1 per 100 000 population was reported during the period 1953-1968 followed by decreasing to 0.1 per 100 000 population within next ten years. Since 1976, a mean annual incidence of 0.37 per 100 000 population was reported [6], decreasing to 0.18/100 000 (2006-2009) [7]. Because the clinical presentation of leptospirosis varies in different geographic areas, and the fatality rate in severe course is significant, a better understanding of clinical presentation of leptospirosis is needed to enhance its recognition and appropriate treatment. Predictors of lethal outcome must be evaluated in each clinico-epdemiological setting to consider regional peculiarities [8]. Leptospirosis has a broad geographical distribution, occurring in both rural and urban areas of tropical, subtropical and temperate regions. The disease outbreaks in developed countries are usually associated with occupational exposure, tourism or sporting events. Developing countries carry the major burden of the disease, with half a million cases reported yearly and a mortality rate ranging from 5 to 10% [2].

The clinical manifestations of human leptospirosis are diverse, ranging from mild, flu-like illness to a severe disease form known as Weil’s syndrome. Severe disease is characterized by jaundice, acute renal failure, pulmonary distress and hemorrhage, which can lead to death in 40% of cases [9,10]. In addition, the central nervous system and the cardiovascular system are also affected [11].

The prognosis of leptospirosis depends of severity, early diagnosis and prompt intensive treatment [11–13]. A recent systematic review estimated that there are 1.03 (95% CI 0.43–1.75) million cases of leptospirosis worldwide each year and 58,900 deaths (95% CI 23,800–95,900) [14,15], which corresponds to an estimated 2.9 million disability-adjusted life years per annum, including 2.8 million years of life lost due to premature death [16]. In the same time, only few studies estimate the costs in outbreak of leptospirosis [17–20]. A leptospirosis epidemic affected New Caledonia during the first semester of 2008. A total of 135 cases were diagnosed with a relatively low fatality rate of 3.7%. Heavy rain falls favored that epidemic. Using retrospective investigations, the estimated cost was 5361 per patient. Including the negative diagnostic costs, prevention and control costs, and for total 157 cases during the 2008 year, the extrapolated 2008 total cost of the leptospirosis epidemic in New Caledonia was estimated at 984 472 including costs of negative diagnosis, worth 3.95 per capita based on 2008 estimates of the total population. During the same period, an awareness programme (flyers, posters and a TV advert) and rodents control measures had cost of 25 027 and 27 050 respectively, a total prevention cost of 52 077 Altogether, the cost of leptospirosis and its control in New Caledonia in 2008 can be estimated as 4.16 per capita [19]. There are not investigations in economical aspect about prognosis of leptospirosis in Bulgaria. The aim of this research was to assess the cost effectiveness of predicting severity at hospital treatment of leptospirosis.

Retrospective cohort study was carry out of 100 consecutive patients with leptospirosis, which were treated in Clinic of Infectious Diseases at University Hospital–Pleven (1976-2010).

The algorithm of our study was based on the steps as follows:

1) Severity of each of cases was individually assessed as mild, moderate and severe according to the following definitions [6]:

Mild form of leptospirosis had been defined at mild to moderate intoxication, anicteric or mild icteric, without hemorrhagic diathesis, without involvement of respiratory, cardiac and central nervous system (CNS), with mild renal dysfunction without acute renal failure (ARF).

2) Calculation of number of cases in each of three groups according to severity–mild, moderate and severe.

3) Calculation of sum of days for hospital treatment in each of three groups according to severity.

4) Estimation of mean of days for hospital treatment in each of three groups according to severity.

5) The approach for economic analysis of acute viral hepatitis [21] was used for calculation of the costs. The prices of four groups of variables (service, laboratory and instrumental investigations, drugs and no-medical costs) were obtained from valid prices-table of the hospital. Four groups of variables had grouped in the prices-table on Excel-sheet as follows: 1. Medical Service–visitations and physical examinations at admission and during the hospital treatment, consultations with other medical specialists, manipulations that had performed from doctors and other medical workers. 2. Investigations–laboratory (performed at Central Clinical Laboratory and Laboratory of Microbiology at University Hospital–Pleven, Reference Laboratory of National Center of Infectious and Parasitic Diseases–Sofia), and instrumental (X-rays, ultrasound investigations). 3. Drugs and blood products. 4. No medical costs (consumption of electricity, water, and meals etc.).

6) The costs were calculated as sum of money in BGL spent per diem and for mean hospital course of treatment for each form depending of severity of leptospirosis (mild, moderate and severe). We had estimated the costs about each variable, total costs of separate group of variables (as sum of money spent for each of four groups of variables) and total costs for each of forms according to severity.

Based to the mentioned above definitions, it had found that the moderate and severe cases were prevalent (39% and 34%, respectively) (Figure 1). Thirteen of the cases were with lethal outcome. 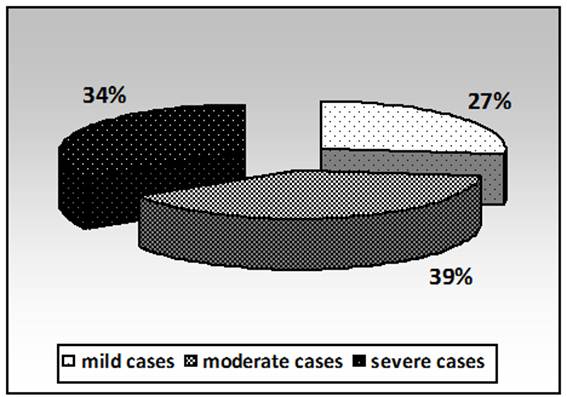 Figure 1. Distribution of leptospirosis cases in Pleven region (1976-2015) according to severity.

The mean financial costs per diem for mild case of leptospirosis had included for service, investigations, drugs and no medical costs 137 BGL, 151 BGL, 24 BGL, and 30 BGL, respectively.

The mean financial costs per diem for moderate case of leptospirosis had included for service, investigations, drugs and no medical costs 174 BGL, 160 BGL, 32 BGL, and 30 BGL, respectively.

The mean financial costs per diem for severe case of leptospirosis had included for service, investigations, drugs and dialysis, and no medical costs 416 BGL, 669 BGL, 630 BGL, and 30 BGL, respectively.

The relativity of the costs per diem for different forms according to the severity of leptospirosis is shown on Figure 2.

The total hospital costs for mean hospital treatment of mild, moderate and severe leptospirosis are shown on Table 1.

The structure of financial costs for mild, moderate and severe leptospirosis is shown on Figure 3.

The structure of financial costs for drugs, blood products and hemodialysis in severe leptospirosis is shown on Figure 4.

Figure 3. Structure of financial costs for mild, moderate and severe leptospirosis (a, b, and c, respectively).

The analysis of the data for total hospital costs of mild, moderate and severe leptospirosis had revealed respective ratio 1 to 1.78 to 6.79.

The biggest fraction of the costs in mild and moderate leptospirosis is for service (44.35% and 49.13%, respectively). The no medical costs are more than the cost for drugs in both mild and moderate leptospirosis. The prices of electricity, water consumption and meals are constantly stable. There is not direct connection between the costs for this group of variables with severity of the concrete case of leptospirosis. A potential economy of financial resources could be achieved by decreasing the numbers of the days for hospital treatment.

The structure of the costs in severe cases included 37% for service and 37% for treatment. The analysis of the costs for treatment revealed that 48.92% of costs for treatment in severe cases were spent on dialysis. The price of one dialyzing procedure in Bulgaria is nearly 200 BGL and the number of the procedures at studied patients varies from one to eight. This fact shows two aspects of the dialysis–medical and economical. From medical view point, the early performed dialysis in severe leptospirosis decreases the risk for lethal outcome and neutralizes increased risk of procedure augmented the risk of hemorrhages caused by the leptospirosis per se [6]. Acute renal failure is a crucial feature of severe leptospirosis and most important factor for life-threatening complications such as lung edema and brain edema. Comparative analysis of deceased and survived severe cases of leptospirosis with and without dialysis revealed that dialysis in severe leptospirosis markedly decreases serum creatinine level [23]. The early initiated dialysis has favorable impact–reduces the risk for life-threatening complications (brain edema and lung edema) and decreases mortality [6,24,25].

From economical view point, the early performed dialysis could be improving the patient’s condition and could be decreasing the number of dialyzing procedures and their costs. The predicting of severe course in case of leptospirosis based on prognostic criteria has had a great significance for early initiation of intensive treatment and dialysis [11–13].

The comparing of the estimated costs in our research with that of Goarant et al. (2009) reveals that the estimated cost was 5361 per patient [19], and in our investigations the mean cost for severe case of leptospirosis was 8 044 BGL (approximately 4 000 . The data are comparable, but in our research the biggest financial burden on the hospital was due to the severe cases that had hospitalized obligatory. The mild and moderate cases have higher probability to remain under diagnosed and respectively no hospitalized.

According to the study of Souza et al (2011), for the 28 confirmed cases that required hospital care, the total cost was nearly US$ 10,700. The total hospital care cost includes the costs of diagnostic tests, professional services, hospital services and companion care per diems. The median hospital cost was US$ 346.44. In summary, the 177 confirmed cases of leptospirosis cost US$ 12,200 in expenses by the Health Care System, which was considered as direct costs by the Department of Health [26]. But in this study the costs are not assessed according to severity of leptospirosis.

Leptospirosis is a social-ecological problem, which often occurs in the context of social inequity. Therefore, there is a critical need to evaluate and address the investment case for interventions that target the underlying environmental conditions and infrastructure deficiencies, such as open sewers in urban slum communities [27,28], in order to make sustainable progress against this neglected disease. Additional work is needed to quantify the economic burden of leptospirosis. Here, we give our humble contribution in calculation of hospital costs for treatment of leptospirosis. In the same time, we consider that the favorable outcome of disease has priority over economic aspects. Correct management of the cases of leptospirosis including early prognosis improves the chance of severe leptospirosis cases to survive.

A better approach for reducing of expenditures for leptospirosis in global plan is the establishment of preventive strategies purposed to combat leptospirosis [29,30]. Educational programs, improvement of sanitation and infrastructure deficiencies are crucial in this aspect.

There are two main steps in the management of leptospirosis cases. The first is early correct clinical diagnosis based on the history of the case, physical examination and routine laboratory and instrumental investigations. The second is assessment of prognosis according to prognostic factors. If the prognosis suggests severe course, there is need of immediately initiation of intensive antimicrobial and supportive treatment with multidisciplinary approach. The initiation of early dialysis is crucial for favorable outcome and could be decrease the hospital costs directly by decreasing the number of dialysis séances and indirectly by decreasing of the costs for drugs and service as result of reducing the days for hospital treatment.