1. The Status of the Chinese Civil Service Classification System 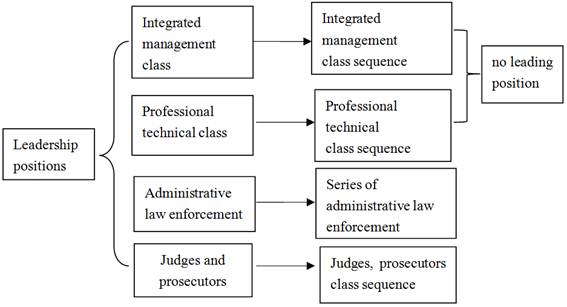 2. The Development of the British Civil Service Classification System

2.1. The Selection Criteria is Given Priority to with Generalists

In mid twentieth Century, the number of British civil servants expanded rapidly. Especially after the Second World War, great changes have taken place in Britain's domestic situation, these changes have great influence on current development of the civil service system. The Second World War promoted the great progress of science and technology; the scientific and technological revolution not only changed the social structure, but also changed the structure of talent. Due to the special background of the war, the government controls the economy of the whole country. So the government needs to hire a number of civil servants with professional economic knowledge to manage the country. In order to gradually adapt to the new situation and new tasks, the most prominent reform of this period was the addition of horizontal divisions to the classification of civil service tastes, that is, outside the administrative categories, professional and technical personnel were added.

In 1950, British civil servants were divided into the following categories: industrial and non-industrial workers; authorized strength and non-authorized strength; general administrative staff and professional and technical personnel. Industrial workers mainly refers to the Ministry of Defense-owned military plants and naval docks, postal system staff, and in the research unit of the technical staff. Industrial workers is divided into 10 categories, have their own special wage level. Non-industrial workers, refers to the office of the executive instruments, administrative and professional management personnel, as well as diplomatic and consular staff.

Professional and technical personnel are divided into two categories of science and technology, the general conditions of service by the ministries, also known as "various departments." Although this stage of reform has increased the horizontal division, but did not fundamentally change the civil service "generalist" and "closed" features, the number of professional and technical categories is still minimal.

2.2. Gradual Transition to Give Priority to with Generalist Specialist Auxiliary Selection Mechanism

In 1964 the Fulton reform strengthened the role of experts, but did not fundamentally change the "generalist" structure. Put forward a series of reform measures, "Fulton report" put forward.

First, the administration should be professional. Financial and social administrators must be qualified for their professional knowledge, and reading classical literature can not serve as a condition for civil servants.

Second, weaken the "generalist" decision-making. The Fulton Report makes the following recommendations: 1, Abolish the organizational structure in which professionals are subject to administrative and they can not be leaders. 2, To set up planning units to elevate government work to the level of planning work and policy research, and plan units to study long-term plans and examine whether daily administrative work meets the requirements of such plans. 3, Allowing ministers to take several private secretaries with expertise, weakening the influence of the generalist on the ministers, who can provide different views and recommendations from other civil servants and make ministerial decisions more proactive.

From the point of development history, the classification system of British civil servants was based on the rank classification, and gradually developed the position classification. Such a development path is that, at the beginning of the establishment of the civil service, social development is relatively backward and social affairs are not so complicated. But with the arrival of scientific and technological revolution, significant improvement of economic level and continuous development of the community, we need professionals to indicate the country. Therefore, professional and technical personnel gradually develop and have more speaking right. In the future, with the further increase of productivity and more sophisticated production technology, we will need more and more professionals to engage in the civil service jobs, eventually forming a pattern which "generalist" and "professionals" co-manage the country.

From the perspective of the division of position group, in china civil service position group is based on the requirements of the actual needs and subdivision, and separate the other groups from the integrated management category such as professional technical and administrative law enforcement class is separated from integrated management class, and then constantly refining to meet the needs of the society. Due to the long history of Britain civil servants, its evolution of position group is a gradual process. The position of Britain is now detailed but not invariable. With the continuous development of society, it can be subdivided according to the actual need.

From perspective position group consist of staff; species of china’s comprehensive management is make up body of china’s civil servant classification. Particularly point out, in china, the staff of party situation is also civil servant. This is different from eastern any of country. As china constitution clearly establish the leading status of the communist party in country political while clearly put forward China's system of multi-party cooperation and political consultation under the leadership of the communist party will exist and develop for a long time. and develop for a long time. Put work of party into the civil servant scope is according laws. This manner is match china chart, this is to seek truth from fact. The rest of staff exclude Party the same as the UK. Meaning is not big, don’t comparison at this.

3.2. Grade Analysis of the Contrast

4. The Path of the Future Development of China's Civil Service Classification Method

4.1. China Is Not Suitable for Political Appointee - Officer

China is not suitable for this kind of "two officer extremely way" rule of thirds. First, China's political system was completely different with the west, And "two officer extremely way" is in line with the western political background. Second, Chinese officials must have a basic experience, basic experience of the work is equal to the officer, And with the constant promotion of personal position, When the regional chief is equivalent to the western political appointee. Finally, China does not exist politically neutral, The communist party of China always lead the Chinese people to victory.

4.2. Classification Method in Psychology in the Future

4.3. In the Position Is Given Priority to Taste Is Complementary in the Way to Reform