Abstract: Water quality is one of the most important criteria to ascertain its suitability for human consumption. An investigation was undertaken to study the physical and chemical properties of untreated and treated drinking water at Pannaaipatti purification plant, Theni District, Tamil Nadu. The physico chemical parameters such as pH, total alkalinity, total hardness, turbidity, chloride, sulphate, nitrate, dissolved oxygen, total dissolved solids and conductivity were analysed. The water samples were clear and odourless. All the parameters of the water samples were within the permissible limit as prescribed by the standard water quality parameters for drinking. Comparatively alkalinity, hardness, chloride, chlorine and total dissolved solids of the treated water were higher than the untreated water. Though all the parameters were within the standard permissible limit for drinking, some of the micro nutrients such as fluoride, magnesium and iron concentration were not recorded.

"No life without water’’ is a common saying depending upon the fact that water is one of the naturally occurring essential requirement of all life supporting activities. Water is one of the major components of environmental resources [1]. Water is a resource that has many uses, including recreation, transportation, and hydroelectric power, domestic, industrial, and commercial values. Water also supports all forms of life and affects our health, lifestyle, and economic well being. Fresh water is a natural home of innumerable living things, many of them harmless or even beneficial, some of them directly or indirectly harmless to man. The harmness due to environmental pollution that affects the general quality of our health and well being [2]. Limnological investigations on water bodies were aimed to assess the deterioration of water quality due to pollution. Several studies have been made on the limnology of fresh water bodies in India [3,4]

Fresh water has become a rare commodity due to over exploitation and pollution [5-8]. The water is the foremost requirement of all human beings. River water is one of the most important and widely distributed natural resources which are considered as supplementary resource to meet the domestic, agricultural and industrial requirements. Such rivers are subjected to various physico chemical and biological processes [9].

Although more than three quarters of the earth's surface is made up of water, only 2.8 percent of the Earth water is available for human consumption [10]. At present, approximately one-third of the world's people live in countries with moderate to high water stress and the worldwide freshwater consumption raised six fold between the years 1900 and 1995 more than twice the rate of population growth. Thus, many parts of the world are facing water scarcity problem due to limitation of water resources coinciding with growing population [11].

The potential of various water resources and their quality should be evaluated thoroughly to generate baseline information for the welfare of Society. Further, it is easy for planners and decision makers to take necessary steps regarding improvement and management of pollution status.

The demands for quality drinking water had changed considerably with the development in olden days, the only requirement of drinking water was that it should be free flowing and non turbid. With increasing industrialization, urbanization, and growth of population, India’s environment has become fragile and has been causing concern [12]. Urbanization has direct impact on water bodies as the settlement takes place around the vicinity of water bodies and due to lack of space, people have tendency to encroach upon the lake [13].

Water in nature is seldom totally pure. Almost 70% of the water has become polluted due to the discharge of domestic sewage and industrial effluents into natural water sources. Increase in human population and urbanization in recent years resulted in gradual deterioration of water quality. The uniqueness of the water body has deteriorated as it is getting thickened with pollutants. It is estimated that each year 10 million people die from contaminated drinking water. According to WHO, [14] organization about 80% of all diseases in human as caused by water. Atlas and Bartha, [15] considered that bacteria play an important role in global ecosystems which are major factors in controlling the quality of water and are fated determinants of pollution released into the environment.

Water plays an essential role in human life. Although statistics vary, the World Health Organization reports that approximately 36% of Urban and 65% of rural Indian’s were without access to safe drinking water [16]. Water scarcity and the fast decline of aquatic biodiversity are indicators of ineffective implementation of water protection policies [17 & 18]. Sustainable and optimal use of natural resources is imperative in any country due to its concomitant economic implications such as industrial and population growth, infrastructure and development demands [19].

Climate change will accentuate shortages of freshwater in many parts of the world during the next 20 years and the seasonal availability of it is uncertain [20]. The terrestrial water cycle has been significantly altered by the construction and operation of water engineering facilities. Reservoirs, in particular have fragmented and transformed the Worlds Rivers. The last century saw a rapid increase in large reservoir building. By the end of 20th century, there were 45,000 large dams in over 140 countries [21-23].

Ground water is the chief source of drinking water in India and this is only 0.61% of the total available water on the earth [24]. Pollution of drinking water sources in rural areas may involve seepage from broken septic tanks, pit latrines and runoff water carrying fertilizers, pesticides, herbicides, fungicides and fecal matter [25 & 26]. Water pollution results in transmission of infectious diseases such as dysentery, cholera, diarrhea, typhoid, shigellosis, salmonellosis, and varieties of other bacteria as well as fungi, viral, and parasitic infection [27 & 28].

The transmission of diseases through drinking water is one of the primary concerns for safe drinking water. Fecal pollution of drinking water may introduce a variety of intestinal pathogens which may cause diseases from mild gastroenteritis to severe and sometimes fatal dysentery, diarrhea, cholera, typhoid, hepatitis, giardiasis etc., Crown, [29 & 30] and Wanda, (2006). The chemistry of water reveals much about the metabolism of the ecosystem and explains the general hydro - biological relationship [31].

Therefore it is necessary that the quality of drinking water should be checked at regular intervals, because of the use of contaminated drinking water, human population suffers from varied water borne diseases. Hence the present study is intended to evaluate the Impact of Treatment in Drinking Water Quality at Pannaipatti Purification Plant, Theni District.

2.1. Description of the Study Site

Vaigai reservoir is located at 70 km from Madurai and lies between 9°30’ and 10°10’ North latitude and 77°10’ and 77°40’ East longitude. The stored water in the reservoir is used for irrigation, power generation and drinking water of Madurai city. The catchment area of Vaigai reservoir is 2253.30 km2, the entire catchment lies in Madurai and Theni districts of Tamilnadu. The catchment area comprises Cumbam valley, Varushanadu valley, Varushanadu hills and Western Ghats. The data were collected from Pannaipatti Purification Plant, Theni district, Tamil Nadu.

The study was conducted during the early hours of the day from January, 2015 to December, 2015. For the present investigation the water samples were collected in sterilized plastic bottles every month in the early hours.

Colour, Odour, pH and Temperature of the water samples were measured on the sampling spot by water analyzer kit. Total Alkalinity, total hardness, magnesium, calcium and chloride contents were analyzed by titrimetric methods in the laboratory following the standard meth­ods as prescribed by APHA, [32].

The physico chemical parameters of the untreated and treated water samples of pannaipatti water purification plant, Theni District, were analysed for its suitability for drinking purpose. The data were compared with the drinking water standards of ISI, BSI and WHO. The data revealed that there was considerable variation in the analysed samples.

The colour of the untreated and treated water samples was clear and colourless. As per WHO, drinking water must be colourless and clear. In 2006, Prakash and Somashekar, [33] reported that the presence of colouring material in water is due to constant mixing with organic debris and the presence of high concentration of iron in it.

The turbidity of untreated water sample was high in December (8.4 NTU) and it was nil in the treated water except in December (0.2 NTU). Turbidity was in negligible concentration as in the study of Nirmala et al. Delphine Rose et al. and Jeyaseli et al. [34 – 36]. Akaka and Thombre, [37] also recorded similar results in drinking water samples at Buldona District. 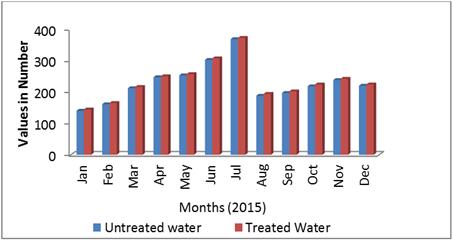 The alkalinity of the sample in the present study was within the standard limits of BIS for drinking water as in the study of Shova, [50]. To compare with the total alkalinity value in treated water was lower than the untreated water (Figure 4). Nirmala et al. [34]; Pavendan et al. [38] and Anilkumar et al. [41] observed higher values of alkalinity in drinking water of Theni District and Tiruchirapalli District respectively. 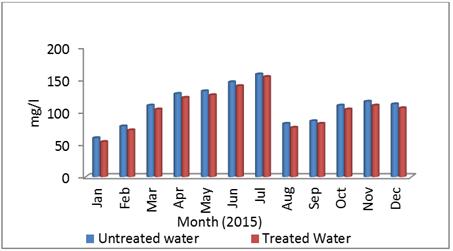 In the present investigation the values of total hardness ranged from 70-164 mg/l in untreated water and treated water. Total hardness of the present investigation was within the permissible limit (Figure 5). In both the samples the hardness of the water was high in July and low in February. Hardness in water is caused by metabolic ion dissolved in water [51]. As the water has higher alkalinity in July, the value of hardness also increased in July, which is indicative of the presence of carbonates and bicarbonates. Similar observations were made by Ashish and Yogendra [52]; Nirmala et al. [34] and Pavendan et al. [38]. 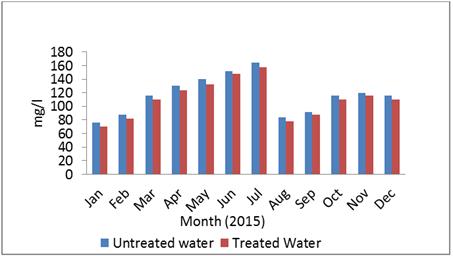 The permissible amount of chloride in drinking water sample was 200mg/l. The water samples taken for the study were within the permissible limit. Chloride was high in June, August, and September in untreated water sample where as it was high in June, August and September in treated water. The value was low in February in both the water samples (Table 1). Variation in chloride content in Vaigai river water sample was observed by Alikhan and Nazar, [57]. This may be due to addition of chloride during the process of treatment. Similar observations were made by Jeyaseeli et al. [36] at Nilakottai Taluk, Shova, 2014 [50] at Katmandu, whereas Balamurugan and Sivakumar, [54] reported higher concentration of chloride in the drinking water samples at Madurai District.

Untreated water contained low concentration of chlorine whereas, high amount of chlorine content was observed in treated water and they are not exceeding the permissible limit (Table 1). This may be due to the addition of chlorine during the purification process. Muegge [59] summarized the effect of heavily chlorinated water on human population exposed deriving varying periods. 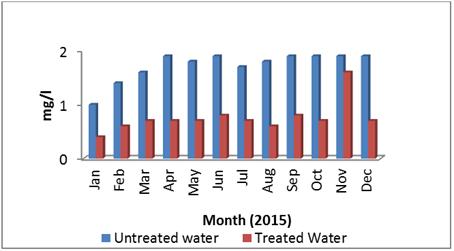 Conclusively, the present study reveals that, the drinking water quality parameters are well within the permissible limit. From the observed results it was investigated that, though all the parameters were within the standard permissible limit for drinking, some of the micro nutrients such as fluoride, magnesium and iron concentration were not reported and there is a lacuna in the report. This calls for active need for water management which requires water quality analysis as the initial step. Therefore it is suggested to monitor the water quality periodically and to analyze all the macro and micro nutrients in water before and after treatment in the laboratory to prevent some diseases such as coronary heart disease, skeletal fluorosis, stained and mottle teeth etc.

Authors express their deep sense of gratitude to Jayaraj Annapackiam College for Women (Autonomous), Periyakulam for providing the laboratory facilities. Authors acknowl­edge the immense help received from the scholars whose articles are cited and included in references of this manu­script. We are grateful to our research supervisor for useful discussions during the course of the study and preparation of the manuscript.