Evidence of the Greek Goddess (Tyche?) in the Underground Troglodytic Handmade Architectural Complex of Samen in Malayer, Western Iran

Abstract: The underground troglodytic handmade architectural complex of Sāmen is located 90 km away from the southeast part of Hamadan and 15 km away from the southwest part of Malayer. It is located in the western part of Iran. The complex was created under Sāmen residential area and within the context of granitic rocks (cotton granite). Four research programs (identification, documentation, clearing and archeological excavations) were conducted on this complex from 2007 to 2011 under Ali Khaksar's supervision; these attempts led to conspicuous results such as discovering human burials and valuable Cultural data such as a seal with a red agate. In this paper, the authors attempt to study these seals are visible. Studies show this seal is of Hellenistic culture and the motif on the seal is related to the goddess of chance and fortune (the goddess of Tyche).

The underground troglodytic handmade architectural complex of Sāmen is 34°12.346’ E and 48°42.129’N and the average height of the mound is 1869 m above the sea level.It is located in Hamadan and in the west of Iran (Fig. 1). This complex is 90 km away of the south-east part of Hamadan, 15 km away from the south-west of Malayer and is located under the residential texture of a small town with the same name (Khaksar 2008: 5), (Fig. 2). 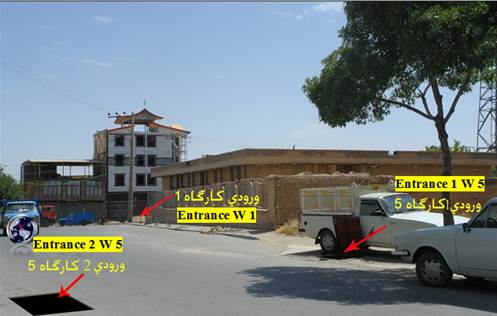 This complex includes handmade underground spaces that have been created in the urban residential texture and within granitic rocks (cotton granite). In this complex more than 50 spaces in different sizes have been found in 8 workshops. The spaces of this complex have been created in various depths between 2 to 8 m blow the ground and include rooms and halls that are linked together through the windows, doorways and passages (Hemati Azandaryani 2013). The spaces include ceilings and arches. Each of these areas has a different size and variety of features like carved stones, doorways, platforms, and niche and oil lamp holes. The connection between the underground spaces in this area has been created through the staircases at the heart of the stone (Fig. 3). 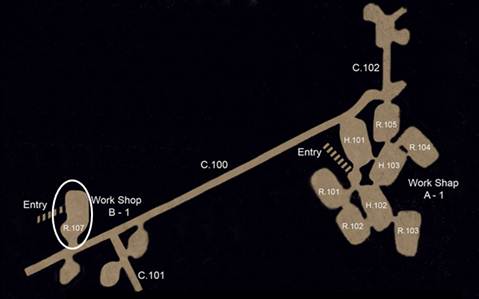 In this complex 4 seasons on research program have been done so far (identification, documentation, clearing and archeological excavations) by Ali Khaksar (Khaksar 2007, 2008, 2010, 2011) And have led to the identification of valuable data from 60 cases of human skeleton remains and other cultural findings (such as an agate seal with motifs on it).The burials can be observed of either in situ or mass bone. This complex is based on archaeological excavations and analysis of data and includes three functional steps. Its primary use is related to the Parthian era (probably the Seleucid period) as a ritual place. In the Parthian era this place was used as a funerary site. During the Islamic period (middle and later centuries) it has been used as a hiding-place or a place of refuge (Hemati Azandaryani 2013).

This space is located in the underground workshop 1-b. Walls and ceilings have been shaped irregularly. Because of demolishing factors some of its parts have been destructed and depredated. The room is on the left side of the corridor No. 100 (north of the Corridor) and is 4.10 meters away from the workshop 1-b.The length of the room is about 3.70 m and its width varies between 1.70 to 3 meters, and its height varies between 1.80 to 1.95 m. In the eastern side of the room remains of attached platforms to the wall are visible which has length of 2.85 m and width of about 30 to 40 cm and a height varies between 20-15 cm on the ground. In this space, there are holes in the walls and smoke can be seen above them. They were holes for oil lamps and had supplied the lighting (Fig. 4). 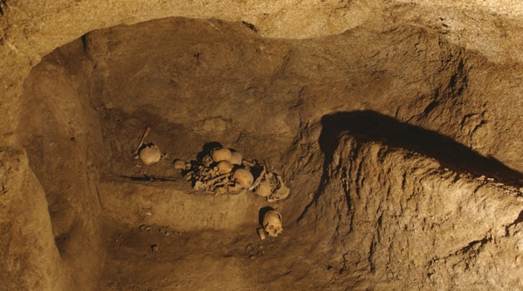 This seal is made of agate with length of 18 mm, width of 10 mm and thickness of 3.5 mm (Fig. 5). A human face has been carved on the seal. There is a profile shape of his head and legs while leaning forward from the waist. Engraved person on the seal has a short dress to the knee and has a hat or bandanna. One of his hands is on a club that is on his shoulder that at the bottom of it a container or a basket is hanging. In his other hand there is an animal (probably a dog) (Hemati Azandaryani 2013: 202-203).The standing person clothes are similar to Seleucid and Parthian eras. The swing trace can be seen easily. This was created when the seal was polished. And its oval shape is comparable with many seals of Seleucid period. The found seal in Sāmen region was made of a red agate and it is stated that type of Seal can give us information about the user's possession, the type of tissue from which it was made and kind of usage they had. Inlaid Signet rings and hard stones like crimson agate seals were popular in Parthian and then in Sassanid eras, and they have survived to Islamic period (Wallenfels 1998: 164).Features such as kind (jacinth stone, lapis lazuli, banded agate, bearing, garnet, crimson agate, hematite and volcanic stones).And seal colors (red, green, brown, gray jade, ruby, purple and rarely ruby-colored) are generally considered for the seals of the Seleucid, Parthian and Sassanid eras. These features are different from the similar models of the Achaemenian period and are not like them(Debevoise 1934: 14-16).In the Seleucid era round seals with long stands were designed in relation with mud tablets and clay seals, Signet rings with long stands were found in abundance in this period. And clay tablets in this period were replaced rapidly with newer written materials (Bivar 1967: 514). 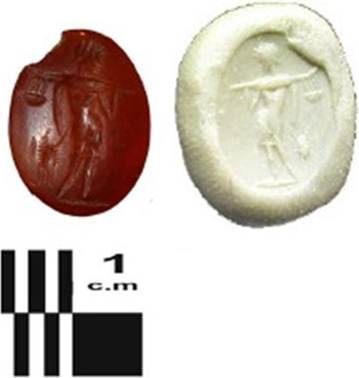 Seals and seals impression can help to identify the unknown aspects a culture. Parthian seals not only have played an important role in business in the community, but also they are important to identify the art and culture of this period. Except a few reports about Parthian site and a few works that can be found in collections and museums little has been written with regard to the seals of this period. According to this issue, for comparison Samen seal whit other seals discovered in present-day Iran and beyond its borders that related to the Seleucid and Parthian period, the comparative table presented below.

Regarding to this fact that there was no inscription on the found seal of the underground troglodytic handmade architectural complex of Sāmen, identification of its date seems to be difficult. According to the texture from which the seal was found, it seems that it was used for religious performances in a period before the Parthian era. It sounds the seal was related to religion issues. Because there is no information about the steps of its usage in the Sāmen region, other performances like its marketing, official, formal and governmental use cannot be ignored. The found seal in Sāmen is comparable with other seals samples and Hellenistic seals from Tape Hegmataneh, Susa and Seleucid.

Therefore, the found seal in Sāmen refers to Hellenistic culture and regarding to the standing goddess position, kind of seal and the curve on the waist of the goddess it definitely refers to the Seleucid era. With regarding to the comparable samples the engraved image more probably refers to the Tyche goddess. The Tyche design is completely related to the Seleucid era art and is studied widely although it is not considered among the main Greek gods)Pollitt 1986: 3; Matheson 1994).The goddess of Tyche that is known the god of chance and fortune in Greece culture, is a clothed standing woman and according to the investigations this design was used in Kedesh in Seleucid era (Bollati and Messina 2004: 121-142). According to the similar samples its date can be referred to the second century of B.C.

We would like to thank Prof. Y. Mohamadifar, Dr. V. Sarkhosh Curtis, M. Rahbar, and Dr. S. Alibaigi for reading and editing the manuscript.