Looking at Rock Art in Northwest of Iran

Abstract: During the recent years more sites of rock art have been identified by the scholars. In Northwest of Iran There are high mountains and good natural conditions created favorable region for life. In different area there are some rock art. All of rock art in northwest of Iran located in Mountainous areas. This part of Iran have been identified 5 site such as Mahabad region, Shahin Dezh region, Meshkin Shahr region, Arasbaran region (Songon), Ahar region (Petroglyphs of Dowzdaghi). Although this regain close to west of Iran region but they are different from the west motifs. There motifs are similar to Azarbijan motifs in north of Iran.

The petroglyphs of Khra-Hanjiran are located in the southeastern part of the Mahabad, at about 26 km in road to Mahabad –Sardasht at 1330 meters altitude above the sea level (Mohamadi Ghasrian & Naderi 2007). For the first time M. Pedram registered data about rock carvings of Khra-Hanjiran (Pedram 1994). This complex consists of about 30 engravings motifs created by means of stone or metal tools by pecking or scratching the surface of the rock. Most of the motifs are engraved on two stone slabs with a dimensions about 3x1.5 m and 1.5 x 60 cm (Salihian 2014). The larger stone include 26 motifs and small panel include 4 motifs. Figures divided two groups, human and animal. A large number of the engravings are animal motifs, which have been carved on flat cliffs and Mostly similar to each other and, most probably, at different times. Unlike the Kurdistan region that the geometric and symbolic figures are mores (Lahafian 2004), less geometric patterns can be seen here. Human motifs are similar and have long arms and legs and some of human shapes that are holding something on their hands.

Chronology: Since from detection this site, proposed different dating from prehistory to later period. Based on figure type and appearance animal some time proposed third millennium BC (Salihian 2014). Probably this rock art was carved at different times. However we need to laboratory examination like accumulated deposits for Dating. 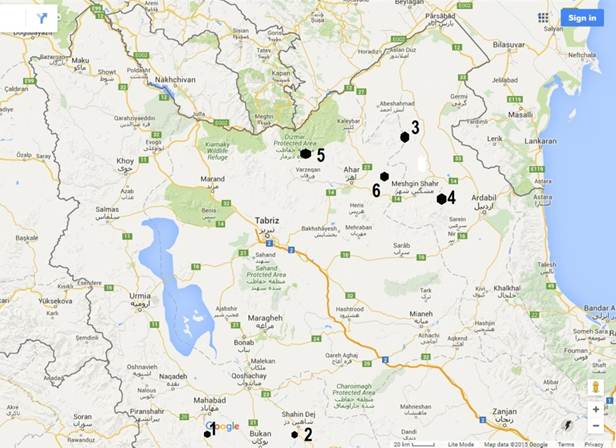 Figure 1. Location of rock art sites in northwest of Iran. 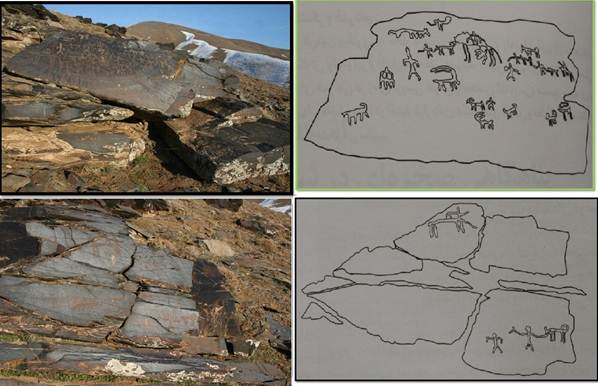 4. The Petroglyph of Aqrablu Village

The Petroglyph of Aqrablu is located in south West of Azerbaijan Province, in the north of the Zarineh rud basin, south of Lake Urmia. It is situated 8 km west of Shahindezh city close to the Aqrablu village. All of the motifs are engraved on one stone slab with a dimension of about 1x1.5 m. The panel includes 7 Petroglyphs. On the vertical surface, there are the depictions of 5 "antelopes" and another animal, probably a dog. Also there is another depiction, which seems to be arc. The size of the "antelope" is 5–15 cm (Binandeh & Kargar 2006).

Chronology: Aqrablu rock art most like to Khra-Hanjiran drawings. Based on drawings techniques and motif type, probably was carved at one period. Unfortunately, no laboratory examinations or field studies to determine their chronology has been conducted in this site. 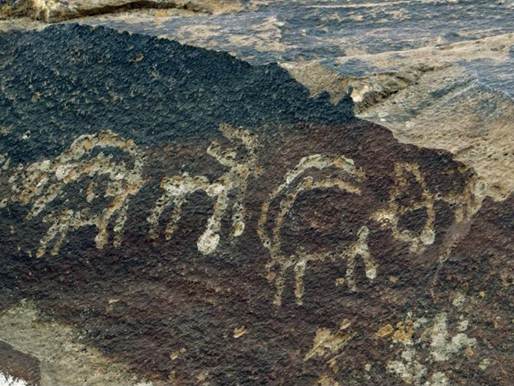 5. The Petroglyph of Shekh Madi

The Petroglyphs of Shekh Madi are located in Ardabil Province, at the 70 km in north of Meshkin Shahr. It is situated 200 m west of Qareh Soo River at 1720 m altitude above the sea level. Also Shekh Madi village is located in 500 m west of complex.

This complex consists of 15 panels and about 30 motifs created by means of stone or metal tools by pecking or scratching the surface of the rock. Most of the motifs are to south side and close together. The Petroglyphs of this site including 53 ibex motifs, 14 human motifs and 9 geometric motifs. More panels consist of antelopes shape, except one of them that human shape more than other.

Most motifs are ibex and the other animals are less. In this complex only antelopes, ibexes, goat and deer can be seen and there are no reptiles and birds. Size of the motifs is 5 –20 cm (Fatahzadeh 2015).

Animal motifs are very similar together and usually have long leg and long horn with linear body. Human shapes in Shekh Madi include two groups of men and women. Men figures are different in size and in position of standing, open hand, hand on back and in the one case probably a doing ritual dance with something like dagger. Based on type of clothing 3 women figures are distinguishable. However, none of them, female organs are not clear. Three women are wearing long skirts and put on one hand on the back. One of them is holding something in his hand probably gives the other person.

Chronology: there are a large number of drawings in Shekh Madi area, probably some of them parallel with Gobustan (Abbaszade 1998) in Azarbijan. However none of the engravings can be dated securely but it seems that most date between prehistoric period and Islamic period.

The Petroglyphs of Shahryari are located in Ardabil Province, in the Meshkin Shahr region. It is situated in Qareh Soo River basin at 1720 m altitude above the sea level. Based on location Shahryari Petroglyph divided two groups. In totally depicts consist of human, animal (domestic and wild), geometric and unclear. First group is located in northeast of Pirazmian village.

The designs are engraved on one stone slabs with a dimension of about 230 x 96 cm. On surface stone Hunting scenes can be seen that three huntsman that are holding arch on their hands and following several antelopes

Antelopes are different in size and have Linear body, Four vertical line indicating the animal's hand and legs and two large curved line that marker the horns.

Second group of petroglyphs are located in southeast of Shahryari ancient site. This complex consists of antelopes in different size, ibexes, horse and Canine. Animal figure are sample and like the first group. Geometric depict consist of circle and square in different size. Unclear and symbolic figure are like mountain/hat? Mushroom? And reticular. Also one jockey in the middle part of panel can be seen. In totally a large number of the engravings are animal and geometric motifs (Horshid 2007).

Chronology: One of the most important problems is dating of rock art. Shahryari ancient settlements which dating came back to late Bronze Age and Iron Age close to Shahryari Petroglyph. Attrition to location may be are contemporaneous (Horshid 2007).

1. The First group, and the smallest in number of drawings Comprises a few human and animal images. There are three natural shelves lying over each other vertically that are incised with some drawings (Rafifar 2007)

2. The big rock shelter is located south slop of Qoshadash Mountain. There are many motifs are in this place. The site is suitable residence for hunters and animal. On the roof and vertical surface, there are a large number of motifs with high density that is difficult to detect and count them. However, about 200 depicts are identifiable (Raffifa 2002). The Animal motifs of Arasbaran including ibex, deer, gazelle and snake (Rafifar 2007).

3. The third groups of drawing located is tens meters of small shelter. Women in dancing in pairs groups can be seen in all of these drawing (Rafifar 2007).

The biggest motifs in this complex is painted image of buck. It is painted in ocher and it’s about 40 cm a size. Most drawings are of ibex and gazelles. In addition to the animal-human figures and symbolic motif can be seen. Human motifs are in different position and similar to the twins and singular (Rafifar 2002).

Chronology: composition of scene in Arsbaran is different from the other rock arts in Iran. Based on archaeological data, northwest of Iran was a part of Urartian temporary in first millennium BC. It is probable that these drawings related to Urartian tribes (Rafifar 2002). 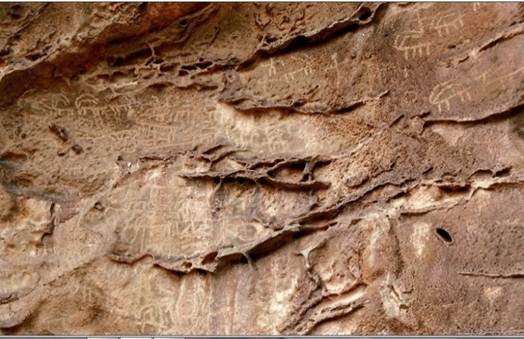 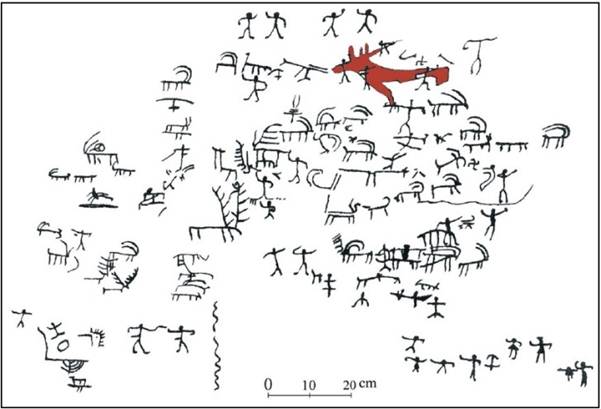 The petroglyphs of Dowzdaghi are located 120 km east of Ahar in Eastern Azerbaijan province, in the vicinity of the village of Dashbolagh garros, which can be considered the nearest residential center to the Dowzdaghi rock art.

It is a scatter of blocks of stone of various sizes, including dimensions from 2x3cm to 60x70cm. This complex is dispersed over an area over 2 km long and 2 km wide, and can be divided into four sub-assemblages, designated with the numbers 1 to 4. All four assemblages are situated around Mt. Dowzdaghi.

The complex contains over four hundred carvings, which can be divided into several groups: the groups of petroglyphs of this site include anthropomorphic figures, animals, hunting scenes, Arabic and Persian inscriptions, and symbolic Designs. Human figure are few and drawings of humans raising one of their hands and sometime in hunting position.

The great majority of which can be identified as ibex. The ibexes are depicted with long elaborately long curved horns. In additional, animals such as deer and ram predominate, bulls, dogs, Bactrian camels, foxes, snakes, alligators, and in one case, a hedgehog swallowing a snake. Animals are often accompanied by abstract designs.

Some conventional motifs can be seen that certainly and meaningfully symbolized something. There are some Arabic and Persian inscriptions in this complex, whose dating must not be prior to the Late Islamic era (Kazempur et al 2011).

Chronology: The varnish on only some panels of the petroglyphs in this complex indicate that the Dowzdaghi rock art was carved at different times, and that a uniform dating for all panels is obviously not possible. The complex was in use for a long period, possibly from prehistoric times to the Late Islamic era (Kazempur et al 2011).

Rock-art sites, which are often seen as space transformed into place, are of particular interest and offer a good example of how sites and monuments are seen in their spacial and social context (Holl 2002).

All of rock art in northwest of Iran located in Mountainous areas. This area favorable for pastoralist groups and tribes people lives there. It seems that is a direct relation between the numbers of motif and favorable environment. In other words, To the extent that the region is more suitable for livestock as well as motifs are more. 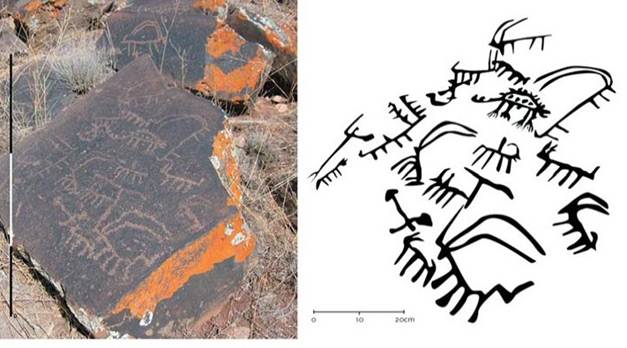 Judging from the motifs mostly found among these engravings, it seems that this rock art was created by pastoralist groups seasonally using the respective territories.

Although this regain close to west of Iran region but they are different from the petroglyphs in west of Iran. More are similar to Azarbijan motifs in north (Farajova 2009, Rafifar 2002). More motifs are animal (=generally Ibex motifs) that existences in environment and reflection of daily activity of people.

Rock art studies throughout the world have explicitly or implicitly invoked ritual as an activity associated with the production of rock art but the articulation between the structure of rock art assemblages and ritual behaviour is rarely made clear (Ross and Davidson 2006).

At least in one site signs of shamanism can be seen. In Arasbaran site there are some motifs that no relation with daily activity, method of production and lifestyle. They are completely symbolic and have been presented in a very precise convention (Rafifar 2007).

One of the most important and difficult questions a rock art researcher has to deal with and on which he does not always find an exact answer, is the problem of dating that has cardinal value for correct definition of place of the given monument in the long circuit of historical development (Farajova 2011). None of the engravings can be dated securely but it seems that most date between Iron Age and early modern times (Azarnoush & Helwing 2005). For exact chronology requires is laboratory work and archaeological studies at pastoralist site which located in adjacent the motifs.