Abstract: The archeological studies and findings in Azerbaijan in Iran especially in the valleys and mountains located in in the basins of the Qarasu (Karasu) River in Meshginshahr in northwest Iran show that this ancient region, like many of the other regions in Iran, has numerous valuable petroglyphs. In this paper, the ShikhMedi newly-found petroglyphs in Meshginshahr located in northwest Iran in Ardebil province will be introduced. In this region, 78 petroglyphs on 15 rocks are found. The petroglyphs are carved and beat. The petroglyphs comprise of human, animal, plant and symbolic motifs. The results of the study reveal that in this region, like the other regions in Iran, the goat petroglyphs are the most common. It is worth mentioning that due to the lack of laboratory facilities, the dating of the petroglyphs is not possible and only the relative chronology can be used.

The petroglyphs are of high importance from artistic, archeological and anthropological points of view. They are of the most distinct examples of multi-dimensional, artistic and cultural remnants used in different sciences like archeology, art history, communication, etc. There have been discovered a considerable number of them in Asia, Africa, Europe, America and even Australia and there also exist valuable ones in Iran on which studied need to be done in order for one to reveal the cultural and communication indexes in different regions. They have been created in an unknown time and considering their current status and not sufficient attention paid to them, the scientific and research centers must provide broad support for researches and studies in this field in the country (Mohammadifar & Hemati Azandaryani 2014. 7). The subjects of the petroglyphs are affected by the geographical, cultural and environmental conditions in each region. Today, the motifs belong to a wide range of periods, from Paleolithic to the contemporary period. Due to the importance of determining the content, meaning and date, these cultural data are investigated from different aspects like archeological, anthropological, artistic, and semiotic ones (Rezaei & Judi 2010. 3).

There is little information available on the way the motifs are carved on the rocks but, considering the geological studies, every type of stone has a special texture for motif and there must have been used tools that are harder than the texture of the stone. The motifs are distinguished based on depth, width or the amount of abrading on the stone and there are different methods for motif like carving and abrading and according to the way they are created mostly beating and abrasion and attrition is used (Karimi 2007. 20).

2. The Geographical Location of the Petroglyphs

The case under study is 70 km to the northeast of Meshginshahr and 140 km to Ardebil, located on a hill 520 m to the east of ShikhMedi (Kanchube) village with the geoposition of 38° 45’ 16" north latitude and 47° 30’ 14" east longitude (Fig. 1). After leaving Meshginshahr and heading toward Qahqaha (Kahkaha) castle on the way to ShikhMedi village, one can get to this collection. One the way, one can clearly see that the quality in this region is not suitable for agriculture and the existing pieces of land are dedicated to dry farming. This region is the basin of the Qarasu (Karasu) River but despite the heavy water flow there can be seen no agriculture in the area. It is worth mentioning that there are a few paddies and farms near the river. The set of motifs are found on rocks in different sizes located on hills on the east of ShikhMedi village 50 m far from the dirt road. The tablets in this set are scattered on different parts of the hill and the average altitude of the set is about 1727 m from sea level. Most of the motifs on the rocks face south and are scattered along the road toward the east. Based on the field studied in the region, no ancient residential site has been identified nearby (Kazemi 2014. 33). Of the difficulties and problems on the way of doing precise researches on the motifs one can mention the scattering of the motifs, the impassable path, and the cracks in the rocks that causes some of the motifs to be destroyed. One may also add the lack of laboratory facilities and consequently absence of absolute chronology to the previously mentioned problems. 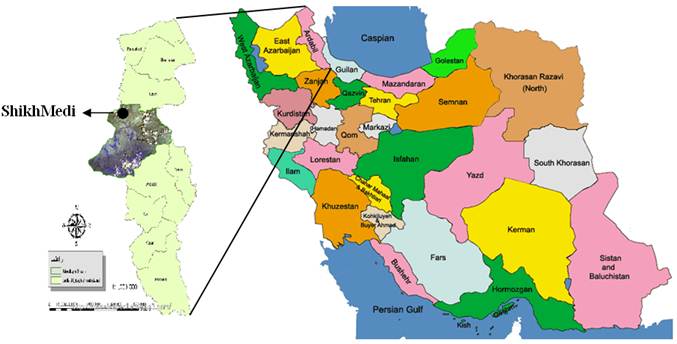 The methodology was in two forms of field and library. In the field method, through a systematic investigation, the remnants were identified and registered with the GPS and after that the motifs were photographed and then drawn with the Corel software. In the library method, all the motifs were reviewed, analyzed and compared with the similar ones.

The studies on petroglyphs in Iran go back to four decades ago. The studies done by M.C. Burney in the caves in Mirmelas, Homyan and Bardespid in Lorestan province in 1969 should be regarded the beginning of the other studies (Burney, 1969). After Burney’s studies, these motifs received more attention and they were investigated more than any other time in every part of Iran. Of the outstanding ones one can name the petroglyphs on Sang-e-Sotoun in Qom (Mohammadi Qasrian 2007) and Arnan in Yazd (Shahzadi 1997) in the central plateau, Marzbanik petroglyphs (Moradi et al 2013) and Negaran valley (Sarhaddi-Dadian et al 2015) in the southeast of Iran.

In Azerbaijan, the most important scientific studies are done by Rafifar that is published in a book titled "Arasbaran Petroglyphs". He investigates and describes the petroglyphs in Qoshadaq, Varzeqan and in Liqlan, Horand in a comprehensive and thorough manner (Rafifar 2002, 2004, 2005, 2007). Of the other outstanding studies in the region one may name the introduction of motifs on rocks in Meshginshahr (Horshid 2004; Horshid 2007), DowuzDaqi Ahar (Kazempour et al 2011), Zanjan (Nourollahi & Alilou 2011; Aali 2013) and Mahabad (Savojbolaq-Sabulaq) (Mohammadi Qasrian 2007). The last studies concerning the identification and introduction of the petroglyphs in the northwest are done by Mohammad Kazemi from the winter in 2013 until the summer in 2014 in which 12 sites underwent field studies and the results obtained were presented in the form of an M. A. thesis (Kazemi 2014).

ShikhMedi petroglyphs comprise of 78 motifs on tablets (slates) and, except for one of them on which there are seen 14 motifs, there exist 3 to 5 motifs on every rock on average. Generally, the ShikhMedi petroglyphs are divided into three groups of animal, human and geometric motifs. Of the motifs, 53 are goats (the number of all the animal motifs is 55), 14 are human and 9 are geometric ones (Fig. 2: Table. 1) and make a total of 15 tablets (Kazemi 2014. 40). 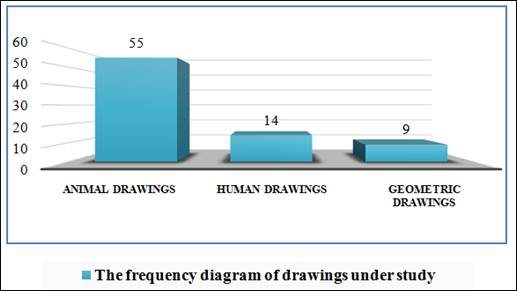 Fig. 2. The frequency diagram of motifs under study (Authors).

In ShikhMedi, the animal motifs and especially the goats are the most common. Unlike the other sets in the region like Süngün (Rafifar 2002), most of the motifs are goat-like (antelopes, goats, deer, ibexes) and there are no animals like snakes, birds, etc (Fig. 3, 5, 6, 7). From the direction point of view, 26, 23, 3 and 1 motifs face west, east, north and south respectively.

In this set, there are 14 human motifs whose sex is impossible to be determined. All the human motifs are completely linear. They can be divided into five categories: 1) the hands open for 90 degrees including 3 motifs, 2) one hand open including four motifs, 3) while dancing including 3 motifs, 4) standing still including 3 motifs, 5) the hand in the form of 90 degrees and legs 45 degrees including 1 motif (Table. 1). In some of the tablets there are some figures with the hand open along the shoulders and the legs open for 45 degrees as if they are shown dancing in the motifs. The best examples of such petroglyphs can be seen in the tablets number 6, 10 and 14. In tablet 14 there is seen a line on the waist which is probably is a turban or a dagger (Fig. 4, 5, 6, 7). 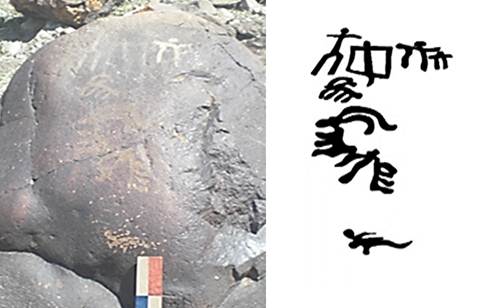 In addition to the animal and human motifs, there are geometric motifs whose best example can be seen on tablet 6 which is a square divided into eight parts by two lines crossing the sides, two lines crossing from the corners and a diamond shape inside the square. One can also see geometric motifs on tablets 11 and 12 but they are not as complicated and elegant as the one on tablet 6. Generally speaking, one may say ShikhMedi collection is too simple and lacks numerous geometric and complicated motifs (Table. 1: Fig. 5, 7).

6. The Chronology of ShikhMedi Motifs

One of the fundamental issues when studying petroglyphs is chronology and dating and can be carried out through sampling and doing laboratory and interdisciplinary studies. Unfortunately, due to lack of laboratory facilities in Iran, precise dating is not possible but through comparative studies one may make the relative dating possible (Mohammadifar & Hemati Azandaryani 2014. 31).

The petroglyphs in the northwest probably belong to a long period, from the Neolithic to Islamic period. In ShikhMedi petroglyphs it is not possible to provide a precise dating. To provide a relative dating of the petroglyphs motifs in this set, one may compare them to the ones found in the south of the Aras River like Süngün (Qaradaq) (Rafifar 2002), Liqlan (Rafifar 2009), Shahr Yeri (Horshid 2007) and in the north of Aras river like Qobustan (Rüstəmov 1994; Farajova 2011), GəmiQaya (Ismayilzada 2010; Baxşəliyev 2006) and Gemiqaya Qarabaq (Martirossian 1981) which are the nearest large and dated areas to the region under study.

Studying the petroglyphs in ShikhMedi and the other petroglyphs in Azerbaijan and the neighboring regions is an introduction to recognize some anthropological and sociological concepts based on immigration and farming. In ShikhMedi, the motifs are created in the simplest form containing no delicacy showing depth, elegance and proportion. In these petroglyphs, antelopes are the most common. Not only are they the most common, but also they are drawn the most skillfully and delicately. For example they are shown in a profile mode with long and bowlike horns in various forms and they are always represented in groups of two and so elegantly and from this point of view they have a lot in common with the ones found in the neighboring regions.