Abstract: A field experiment on sugarcane was carried out during 2012-2013 season at the Indian Institute of Sugarcane Research Farm, Lucknow (UP), India to assess the effect of weed control methods on growth and development of weeds in sugarcane. The experiment was applied according to the Randomized Complete Block Design RCBD with three replications. Application of weed control methods was made at tiller stage of sugarcane crop (Variety CoSe 92423). All 14 treatments comprising various doses and time of application of sufentrazone alone or in combination with other weed control methods including other herbicides. The results have shown that the weed density and dry matter accumulation were significantly reduced due to different treatments at all the growth stages of the crop in comparison to that of control. Weed growth in terms of weed density was recorded to be the lowest with sulfentrazone (pre-em; 900 g ai/ha) at 60, 90 and 120 Day After Planting. However, the dry matter accumulation by weeds was the lowest with three-hoeing as observed at the same growth stages.

Sugarcane crop suffers heavy infestation with weeds that can be controlled manually, mechanically, biologically and chemically[1].The nature of weed problem in sugarcane cultivation is quite different from other field crops because sugarcane is planted with relatively wider row spacing and crop growth is very slow in the initial stages. It takes about 30 - 45 days to complete germination and another 60-75 days for developing full canopy cover [2]. Thus the initial 90-120 days period of crop growth is considered as most critical period of weed competition. Therefore the weed management practice adopted should ensure a weed-free field condition for the first 3-4 months period [3]. Experiments were conducted to evaluate different weed control methods in sugarcane crop. Results revealed that all the weed control methods significantly reduced weed flora and weed biomass as compared to weedy check [4-6].

The specific mode of action for 2,4-D is not completely understood, but like other auxin-type herbicides ethylene evolution is stimulated and uncontrolled growth ensues [7]. Sulfentrazone applied pre-emergence to weeds controls several broadleaf weeds and sedges that are not easily controlled by clomazone[8-10].The trash on decomposition release nutrients which improves the fertility of soil. Mulching with sugarcane trash is, therefore, advantageous over burning which is usually practiced to reduce the incidence of diseases and insect-pests, as in the case of scale insect [3].

In view of information recorded in foregoing paragraphs the present study was carried out to assess the effect of weed control methods on growth and development of weeds in sugarcane.

A field experiment was conducted during 2012-2013 season at the Indian Institute of Sugarcane Research farm, Lucknow (UP), India to assess the effect of weed control methods on growth and development of weeds in sugarcane. Application of weed control methods was made at tiller stage of sugarcane crop (Variety CoSe 92423). In all 14 treatments comprising various doses and time of application of sufentrazone alone or in combination with other weed control methods including other herbicides were evaluated in Randomized Complete Block Design (RCBD) with three replications. The treatment details are presented in table 1.

The soil of the experimental site was Sandy loam with pH 7.83 and organic carbon 0.40%, however available N, P2O5 and K2O were determined to be 222.6, 16.8 and 186.1 kg/ha, respectively. The gross plot size was kept 36m² comprising six rows of sugarcane placed at 75 cm distance from each other. Each experimental unit was separated from other by 0.5 m while distance between two replications was 1.5 m. Each experimental unit contained six rows of sugarcane having length of 8 m. Recommended doses of fertilizers including 150 kg N, 60 kg P2O5 and 60 kg K2O/ha was added to experimental land. Nitrogen was added by application of urea (46% N), in three parts. First part before planting, second part 60 days after planting (DAP) and the third part 90 DAP. Full dose of P and K were applied at the time of planting. Bavistin (systemic fungicide) was used for seed treatment @ 0.2%, whereas chlorpyriphos (insecticide) was applied at the rate of 5 L/ha for drenching of sugarcane setts to ward of termites and other insects.

The methods were applied in recording of observations on different parameters as follows:

Calculated number of plants that appeared above soil surface 45 DAP.

All the weeds present in the control experimental plot were uprooted and identified.

A quadrant sized 1.0 m X 1.0 m was thrown randomly in each experimental unit three times and green weed plants those were not affected by herbicides were counted and averaged.

Was calculated from the following equation:

Green weed plants were cut at the soil surface from the same site in the experimental unit three times the quadrant (1.0 m2) was used for counting of weeds for calculating weed density. The weeds samples were air dried under laboratory conditions.

-Inhibition proportion of dry matter (%): Was calculated from the following equation:

Analysis of data was done using statistical tools of Randomized Complete Block Design. LSD was used to compare treatments at significant level of 0.05 [11]. 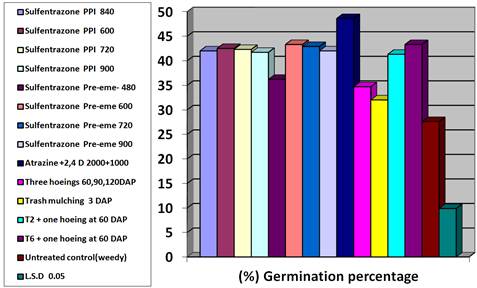 Figure 1. Effect of weed control methods on germination (%) of sugarcane

At 90 DAP the prominent weed species were the sedges and Cyperusrotundus occupied 35.6 per cent share in total weed population (Table 2). Whereas, the broad leaved annual weed, Amaranthushybridus and broad leaved perennial weeds i.eSolamumnigrum were in a very few numbers that constituted 17.3 per cent of the total weed population. Grasses including perennial (Cynodondactylon) and annual (Echinochloa crus-galli) constituted 47.1 % of total weed density (Table 4). At 120 DAP, sedges (Cyperusrotundus) and broad leaved weeds occupied 25.1 and 18.5 per cent share in total weed population, respectively. Whereas, the grasses contributed 55.3% to total weed density (Table 5). Change in weed flora with the advancement in crop growth may be attributed to changing micro-climate and weather conditions. It has been reported that grasses and sedges thrive well in sugarcane fields particularly during rainy months that coincides with post 90-days growth stage of sugarcane crop in sub-tropical north Indian conditions [12].

Table 2. Name and type of weeds found in sugarcane.

Table 3. Effect of weed control methods on density of weeds(number/m²) in sugarcane at 60 DAP.

Table 4. Effect of weed control methods on density of weeds(NO./m²) in sugarcane at 90 DAP.

Table 5. Effect of weed control methods on density of weeds(No./m²) in sugarcane at 120 DAP. 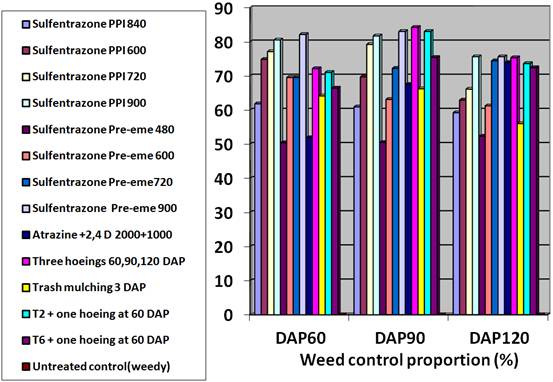 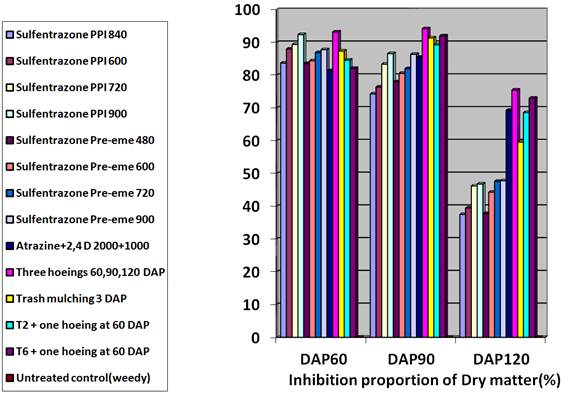