Abstract: Understanding crop physiology provides us with an exciting information and knowledge for better crop management towards increasing productivity. Based on this fact, many physiological aspects of cereal crops (wheat, rice, sorghum and barley) have been studied during the last two decades in Iraq with interesting achievements. These aspects included : physiological aspects of tillering in wheat and its relationship to the crop management and grain yield, seed priming of rice and sorghum for better seed germination and field establishment, accurate timing of agrochemicals application (e.g. nitrogen fertilizer and plant growth regulators) based on certain critical growth stages to increase grain yield of wheat and barley, and proposed strategies for saving water in rice cultivation among them growing rice successfully, under sprinkler irrigation for saving water and increasing water use efficiency (WUE). The objective of these four case studies was to improve the cereals management and, hence, increasing their grain yield via physiological approaches. Considerable increases in the grain yield of these cereals crops have been achieved via the combination of crop physiology and crop management. Full details of the methodologies and achievements will be presented for each case study. In conclusion, this approach, may represents a good and effective strategy to increase crop productivity and saving water.

Crop physiology is the science of plant's functions under normal and stressed conditions. Like any other area in biological sciences, both the scope and depth of our knowledge of crop physiology are rapidly expanding as crop physiologists are continuously making new discoveries. This phenomenon has resulted in the compilations of a large volume of information since the first establishment of crop physiology as a science. This led to the fact that physiological processes control plant growth and crop yield. Therefore, better, comprehensive and up-dated understanding of crop performance in relation to the yield becomes essential as yield is the ultimate gain of all physiological processes. In fact, this makes physiological studies very effective and successful approach to solve the problems of crop productivity. In Iraq, during the last two decades, many physiological studies were conducted aiming to increase the cereal crop productivity via improving the crop management. Four case studies will be presented include : relationship between tillering and crop management of wheat, seed priming of rice and sorghum for better seed germination and field establishment, rice and water requirement and accurate timing of agrochemical application for barley and wheat.

2.1. Relationship Between Tillering and Crop Management of Wheat

Tillering is a characteristics of cereals (e.g. wheat) as it is the longest process in the wheat life cycle and the most important growth stages where most grain yield components are determinant during tillering. Based on these facts, a comprehensive studies of tillering aspects of wheat under my supervision as influenced by genotypes, sowing date, nitrogen level, seeding rates and seeding depth were conducted in Iraq during the period (2007-2011) (Al-Hassan 2007, 2011, Baqir, 2011).

The objectives of these studies were to obtain better understanding of tillering pattern and capacity of different wheat varieties under the influence of many agronomics practices in an attempt to relate tillering process to the wheat management. The effect of seeding rates and nitrogen levels on tillering will be presented as they are key factors of crop management. Four wheat varieties (Al-Iraq, Al-Fath, Abu-Ghraib -3 and Iba – 99) were grown by using five seeding rates (60, 80, 100, 120 and 140 kg.ha-1) and five nitrogen levels (0, 100, 150, 200 and 250 kg.ha-1) in two seasons (2008-2009) and (2009-1010) (Al-Hassan, 2011). Results showed that wheat varieties were significantly different in their tiller numbers.-1plant in both seasons as affected by seeding rates and N levels. Al-Iraq variety had the highest averages of tiller number and grain yield in both seasons. The seeding rate (100 kg.ha-1) and N level (150 kg.ha-1) gave the highest grain yield.ha-1. Results also indicated that tiller number.-1Plant decreased by increasing seeding rate but increased by increasing N level up to 200 kg.ha-1 then a significant reduction in tiller number occurred when using 250 kg.ha-1. Therefore, seeding rate and N fertilizer should be based on the tillering capacity of each variety.

2.2. Seed Priming of Rice and Sorghum for Better Seed Germination and Field Establishment

Seed priming is a generic technology and addresses a fundamental requirement for crop production – the need to have a field full of vigorous plants. It is a simple, proven technology that has been developed, tested and refined in laboratories, in experimental plots, and by farmers themselves in their fields. It is easy to use with a wide range of crops in many different farming conditions. Seed priming can be accomplished through different methods such as hydro-priming (soaking in water), Osmo-priming (soaking in osmotic solutions such as polyethylene glycol, potassium salts, e.g. KCl, K2SO4), vitamin, e.g. ascorbic acid and plant growth regulators (GA3, CCC, Ethephon, IAA). Primed seeds usually have higher and early synchronized germination (Brocklehurst et al., 1984, Kaya et al., 2006, Farooq et al., 2009) due to simply a reduction in the lag time of imbibition (Brocklehurst and Dearman, 2008), build – up of germination – enhancing metabolites (Farooq et al., 2006), metabolic repair during imbibition (Bray et al., 1989) and osmotic adjustment (Bradford, 1986). Another benefits of seed priming have been reported e.g. better competition with weeds, early flowering and maturity and resistance to environmental stresses such as drought and salinity (Alireza EIVAZi 2012), and Farooq et al., 2013.

In Iraq, rice and sorghum grown widely as important summer crops. However, cultivation of these crops facing the problem of low germination and field emergence in rice grown by direct dry drilling and the high gap between standard germination percentage and field emergence in sorghum. Therefore, a study was conducted during 2006 – 2009 to solve these problems via seed priming technique under my supervision (Cheyad, 2008, Al-Selawy, 2011). 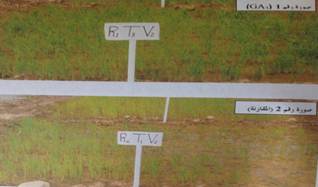 Fig. 1. Effect of GA3 on field emergence of rice (above) compared with control (below).

The future of rice cultivation and production in Iraq and elsewhere will depend entirely on the development of new technologies to use water efficiently i.e. more rice per unit of water or more crop per water drop to maximize the productivity of water unit not area unit. The new directions, currently are to develop efficient management policies in operating irrigation systems, adopting new technologies to reduce rice water consumption and making changes in the rice plants themselves that make them using water efficiently to prevent or reduce the rice field flooding. These strategies are so important as rice crop is the biggest consumer of water: it takes some 5.000 liters of water to produce one kilogram of rice. Compared with other crops, rice production is less efficient in the way it use water. Wheat, for example, consumes only 4.000 m3.ha-1 while rice consumes 7.650 m3.ha-1 (IRRI, 1994-1995). 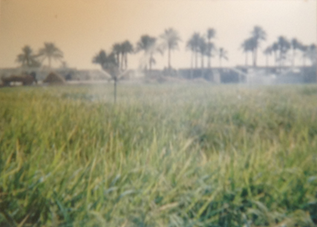 Over 5 years (1997-2001) of conducting field trials and on-farm research, a new rice cultivar was tested, evaluated and released in 2001 (Fig. 3). This variety was watered by using intermittent irrigation method (i.e. deficit irrigation) every 7 days. Grain yield (GY) t.ha-1, total consumed water (TCW) m3.ha-1 and water use efficiency WUE (1 kg grain.m-3 water) of this new variety when irrigated every 7 days is given in Table (1). 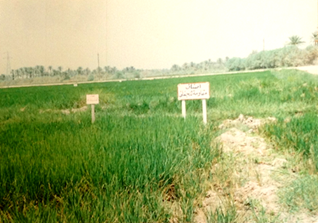 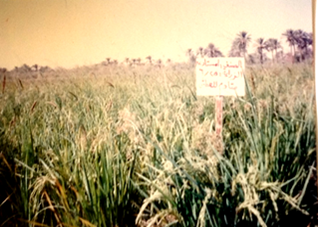 Although there was a reduction in the grain yield by (22%) when crop irrigated every 7 days, a huge reduction in the TCW by (70%) was achieved. However, the WUE was increased by (168%). This variety was characterized by its short growth duration (135) days, and short plant height (80) cm as an average compared with (155) and (130) for the local variety anber-33. Interesting results here, that the huge saving in TCW will be used in growing new land by rice or other summer crop e.g. maize which compensates for the reduction in GY of rice due to the intermittent irrigation (every 7 days). Additional benefits could be gained by using this method of irrigation among them: reduction in the contamination of environment via less amounts of agrochemical which used in cultivation of rice (fungicides, fertilizers, herbicides, etc.) to be moved to the drainage and irrigation channels. Therefore, human being, animals, birds and fishes will be protected from the chemical poising risks.

Breeding for short growth duration is considered one of the new directions in the field of plant breeding as short growth duration variety consumes less water. After 5 years of trialing, a new variety called Bernamaj-4 was released. (Fig. 4). Characteristics of this variety compared with local one and other genotype are given in Table (2). 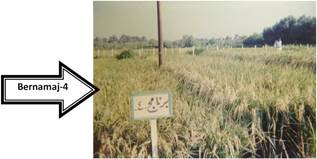 2.4. Accurate Timing of Agrochemical Application for Barley and Wheat Crops

From germination until harvest the plant develops through an orderly series of phases (Kirby and Appleyard, 1984). The timing of these phases depends on the environment and variety, and cannot be predicted with precision. Only direct observation of the shoot apex or developing ear of a plant allows precise identification of the developmental stage. Therefore, an understanding of cereal plant development can give extra insight into other aspects of crop production especially, the application of agrochemicals (e.g. nitrogen fertilizer, plant growth regulators … etc.) to the cereal crops to increase their grain yield. For nitrogen fertilizer, there is now much interest in the possibility that nitrogen could be used more efficiently if applications were timed on the basis of plant developmental stage. Based on this concept, a two – year field trial using widely grown barley varieties, Arivate (Hordeum vulgare L. six – rowed barley) and clipper (Hordeum distichum L. – two – rowed barley was conducted during 1992/1993 and 1993/1994 at the experimental farm of the college of Agriculture at Abu-Ghraib, Iraq (Jaddoa, 1997). Applications of nitrogen fertilizer were timed to coincide with double ridges, maximum spikelet number, and booting stages (Fig. 5). compared with the traditional top-dressing of nitrogen which was based on calendar date i.e. 45 days from sowing. 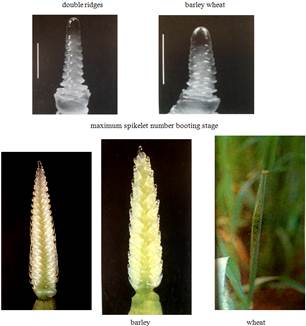 The idea of shifting from calendar date criterion to the apex development is based on the fact that barley grain yield can be divided into several components. These components are dependent upon processes controlling apical development and grain filling (Ma and Smith, 1991). In this two-year field trial, nitrogen fertilizer as urea 46% nitrogen was splitted two or three times. All split treatments increased barley grain yield. Three applications showed the highest increase, 39.6%. The increased grain yield was due to increased two components, ear number and 1000 kernel weight and, more interestingly, improved harvest index.

This result indicates clearly that timing of the application is equally if not more important than the amount of used nitrogen. In wheat, similar findings were obtained in large scale area (10 ha) south of Baghdad – Wasit province – private farm by application of the recommended nitrogen fertilizer at the same developmental stages. There was 22% increase in the grain yield due to increased ear number and grain number compared with the calendar method of application. Besides, no lodging occurred in the area fertilized by using developmental stages criterion with totally lodged area of control plants.