Abstract: To determine the elements of soil water balance equation during the growing season detailed description for calculating daily contribution rates to evapotranspiration of wheat

Surface water resources in Iraq of the Euphrates and the Tigris rivers declined sharply during the last two decades thus creating severe water scarcity in most irrigated areas and reducing Falkenmark water scarcity index from 2648 m3 per capita per year for the 20th century to 989 m3 per capita per year for the 21st century (Al-Shahrabli 2009, Saleh 2010). Limited water resources is the most effecting factor governing agriculture production and rising instability of food security. Understanding the magnitude and dynamics of applied irrigation water is crucial to development of technological options for sustainable management of available water resources (Strauss et al., 2010). The general soil water balance equation is given as:

where I is irrigation, C is upward capillary flux, P is precipitation,

is change in soil water storage, ET is evapotranspiration, R is runoff losses and D is deep drainage losses. Components ET, P, / and C are always positive, R and D are always negative but

can be positive or negative. Negative

indicates depletion of soil-water storage. In situ assessment of the hydrological mass flux is essential in food security research (Owonubi et al, 1991) and irrigation water and land management (Brown et al., 2012). Methodologies, experimental techniques and modeling at the field scale facilitate applying the right amount of irrigation water at the right time that can based on soil, plant and/or atmospheric measurements and is commonly known as scientific irrigation scheduling (Lieb et al., 2002). Metering the irrigation system laterals at the field scale allows precise application of the deficit in plant available water between irrigations to the effective root zone (ERZ) and minimizing run off and deep drainage losses ( Moiwo et al., 2011). In arid climates the contribution to plant needs from precipitation is negligible since rainfall intensity is low and mean annual precipitation is less than 100mm. Precipitation is always measured easily and precisely by rain gauge .

In most studies of soil water balance irrigation water is applied to replenish depleted plant available water to field capacity. Eiasu et al. (2006) applied four water depletion levels (20, 40, 60 and 80% of the plant available soil water) in the top 0.8 m root zone and noticed that plant roots extracted most soil water from the top 0.4 m soil layer. The depletion rate at which water content is determined depends on plant and soil characteristics and its critical to water productivity (Jalota et al., 2006). The difference in stored water in ERZ requires the determination of initial water content before planting besides final water content after harvest. When initial water content in the ERZ exceeds assumed deficit then stored water is positive. Even gravimetric method for determining water content is basic but it represents the yard stick for other methods thus can be used to monitor change in water content during irrigation (Odhiambo and Bomke, 2007). When water is applied to satisfy plant evapotranspiration only then no percolation below the root zone occurs and deep drainage losses is set to zero. To insure zero deep drainage losses tensiometrs can be installed at discrete depth intervals including at least the upper and the lower boundary of the ERZ and the vicinity of the capillary fringe of a shallow water table to determine soil water potential and flux direction (Saini and Ghildyal, 1977). Contribution form ground water to plant evapotranspiration can be determined according to Richard's equation (Richard's, 1931). In case of shallow water table the capillary flux is determined from the change in water content in the layer designated by tensiometer placement at the lower boundary of ERZ as its upper boundary and at the water table ( capillary fringe) as its lower boundary. This study aimed to detailed description of the components of soil water balance equation for determining daily water use by growing crops under shallow water table and providing all equations necessary for calculations.

latitude east and 32m altitude during 2008-2009 wheat growing season in Iraq. Wheat (Triticum aestivum L.) seeds were planted at a rate of 130 kg. ha-1 on 27/11/2008 at a depth of 5cm in grain drill rows and was harvested on 3/5/ 2009. Treatments included three levels of depletion rates 50, 70, and 90% from plant available water (PAW) and three irrigation depths [Depth of Effective Root Zone (ERZ)]; 30 cm from planting to harvest, 30 cm from planting to flowering then 60 cm from flowering to harvest and 60 cm from planting to harvest. The study was conducted in randomized complete block design with three replicates resulting in twenty seven 5m×5m experimental plots. Depth of applied irrigation water (DAIW) was calculated based on depletion rate from PAW in the ERZ. Water content changes was monitored gravimetrically using soil sampling tube (2.5 cm OD) extending to 90 cm depth. It is necessary to mention here that this study required predetermination of the soil-water retension relationship. Amount of irrigation water for the first irrigation was assumed equal to the volume of water required to increase water content for the plot from initial water content before first irrigation (

is the plant available water for the ERZ.

0.001 m3 volume difference fixed at the end of plot lateral. Each lateral equipped with control valve located directly before the water meter. Except first irrigation water was applied at different times depending on depletion rates and irrigation depths. Gauge tensiometres were installed at 30, 60 and 90 cm as shown in figure (1) for measuring matric potential (

Where Gr is gauge reading and zo is the vertical distance from the gauge to the center of ceramic cup of the tensiometer.

Total water potential was then calculated as the sum of matric and gravitational potentials to determining flow direction. Rate of ground water contribution to evapotranspiration was calculated for each irrigation according to Richard's equation from the change in soil water content in a layer designated by ERZ as Its upper boundary (30 or 60 cm) and depth of tensiometer placement at 60 cm for 30 cm ERZ and at 90 cm for 60 cm ERZ.

where i is a counter for irrigation number and k is the total number of irrigations. Laboratory determined values of

Table 1. Measured and calculated values of the components of the soil water balance equation.

† Average of data in column

†† Sum of data in column relationship

values in column (5) does not necessarily equal laboratory estimated

at the assumed depletion rates as shown in table (1) due to soil heterogeneity.

before first irrigation was 0.205 cm3.cm-3 resulting in the highest DAIW value (58.8 mm) for the 30 cm depth and 50% depletion rate. DAIW for the first irrigation was assigned to be equal to required volume of applied irrigation water divided by plot area (25m2) to replenish initial water content of the 30 cm ERZ to the field capacity (0.401 cm3.cm-3). For the remaining irrigations DAIW was calculated on the same basis for different treatments based on irrigation depth and

value at irrigation was greater than water content at 50% depletion (0.291 cm3.cm-3) then water storage (

value (25.5 mm) was obtained during first irrigation to compensate for the deficit in

values was obtained at harvest since soil profile was undergoing drying process under dry and hot conditions for 22 days after last irrigation. DAIW values were calculated according to depletion rate, irrigation depth and

0.001 m3 volume difference that facilitated applying exactly the right DAIW and eliminating run off losses during water application to experimental plots. Drainage losses were set equal to zero since total potential head at 30 cm was always lower than total potential head at 60 cm depth resulting in continuous upward water movement from the ground water (90 cm) towards ERZ (30 and or 60 cm). Daily contribution rate to plant evapotransiration (

) which was accounted for by irrigation water was calculated according to the following formula:

where T is time in days between two consecutive irrigations. Values of

are given in column (8). Contribution from DAIW to plant evapotransiration for each irrigation (

) was calculated according to the following formula:

and is given in column (10). Total contribution from DAIW to plant evapotransiration (

's for all irrigations and was calculated according to the following formula:

where i is a counter for irrigation number.  valuefor this treatment was 363.60 mm during the growing season.

rate, 2.22 mm.d-1 during first irrigation is attributed to low canopy and high evaporation potential. Except last irrigation where soil profile was undergoing drying process for harvest a consistent increase in

) for a soil layer designated by tensiometer placement was calculated according to Richards' equation as follows:

where zn and zn+1 wer are the upper and lower boundaries of the 30 cm layer below ERZ. Boundaries of this layer were determined by tensiometer placement either at 30 and 60 or at 60 and 90 cm for 30 and 60 cm ERZ respectively. ∂θ is the difference in volumetric water content which was calculated for the 30-60 cm layer according to following formula:

where 30 and 60 represent the boundaries of the layer of the upward flux for the 30 cm ERZ. For the 60-90 cm layer ∂θ was calculated according to following formula:

where 60 and 90 represent the boundaries of the layer of the upward flux for the 60 cm ERZ. ∂T is the time difference in days between two consecutive irrigations.

Daily ETc values are given in column (9). Contribution from upward flux to evapotransiration for each irrigation (

) was calculated according to the following formula:

and is given in column (11). Total contribution from upward flux to plant evapotransiration (

's for all irrigations and was calculated according to the following formula:

value for this treatment was 78.28 mm during the growing season which represents 21.5% of the

Actual rate of evapotranspiration for each irrigation,

and was calculated according to the following formula:

value for the first irrigation was 39.75 mm. Cumulative evapotarnspiration (

according to following formula:

. Compared with 30 cm irrigation depth almost the same values were obtained for

during the first seven irrigations. Increasing irrigation depth to 60 cm along the growing season decreased number of irrigations and

, and DAIW but significantly decreased

values with increasing irrigation depth is best explained according to the Darcy's law where flux term between two points is proportional to the difference in total water potential divided by the distance (vertical in this study) between the two points at given water content or suction head values. Values of total potential head for 30, 60 and 90 cm after 24 hours following irrigation ranged from -105 to -75 cm H2O as shown in fig. (2). 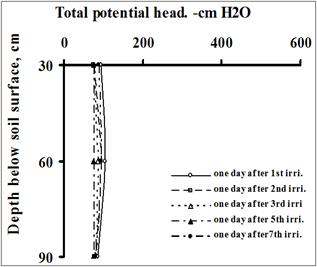 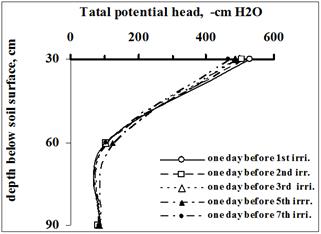 Values of total water potential at the 60 cm depth were almost the same during the growing season since water table level ranged between 70 and 90 cm. These findings agree with the findings of Salim and Rasheed (2012) who studied the movement of zero flux plane during irrigation under shallow water table condition. Compared with the distribution of total potential head shown in figure (3) different distribution patterns were obtained when the water table was deep enough from ERZ (Magdi et al. 2003, Joshi 1997).

Due to differences in

Depleting 90% from available water content decreased number of irrigations and increased DAIW. While

contribution to actual evapotranspiration, 96.59 mm, occurred under 30 cm depth and decreased by 62.7% for the 60 cm depth treatments. Decreasing average

values with increasing irrigation depth is attributed to decreasing hydraulic head gradient between 60 and 90 cm compared with the gradient values between 30 and 60 as shown in fig. (4) for the 90% depletion rate. 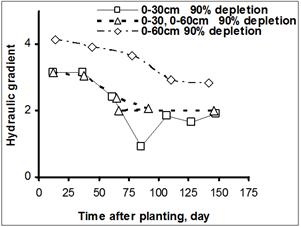 The highest DAIW, 524.40 mm, was applied for the 60 cm depth resulting in the highest positive

value ( 45.00 mm). It seems that the fifth irrigation was not necessary for plant growth since it was applied before 15 days from harvest where the grains were at the drying stage.

The highest ETi contribution to actual evapotranspiration, 496.50mm occurred under 50% depletion and 60 cm depth and decreased by 27.2% for the 30 cm depth. The highest

Under water scarcity circumstances and shallow water table condition, a precise assessment of flow processes occurring during the water distribution and redistribution in the vadose zone is required to determine daily contribution rates to plant evapotranspiration from the soil water balance equation and to minimize water losses and maximize capillary flux contributions which in turns increase water productivity. Results of this study can be used as a field practice for maximizing contribution from shallow water table to crop evpotranspiration when considering depletion rate and irrigation depth.