Abstract: The experiment was conducted to study the effect of sodium chloride (NaCl) at the concentrations of 0.0, 0.5, 1.0 and 1.5% on the callus cells. The Iraq wheat variety was grown in vitro for the purpose of knowing the effect of salt stress on some indicators and cellular components of callus by using a randomized complete design, at the laboratories of tissue culture propagation date palm unit in the College of Agriculture / University of Kufa during the period 2014-2015. Fresh and dry weight, the rate of absolute growth, percentage of dry matter of callus, content of the callus cells of proline, total soluble carbohydrates, sodium and potassium ions, effectiveness of the enzymes catalase and peroxidase study shock salt proteins in callus were determined as indicators of the effect of NaCl on the callus culture cells in the above salty medium and the results can be summarized, to control treatment achieved the highest average of (fresh callus weight, dry callus weight, the absolute growth rate of potassium ion), which was (0.0805 g, 6.13 mg, 3.147 mg / day and 1.125%) respectively, while the conc. 1.5% NaCl gave highest average in callus content of (proline, total soluble carbohydrates, sodium ion, the effectiveness of Catalase and Peroxidase enzyme and Salt shock proteins), which (0.134 mg / g, 2.9527 mg / g, 0.1050%, 0.1510 Micromol / protein / min, 0.1127 Micromol / protein / min and the emergence of small molecular weights), respectively.

The bread wheat Triticum aestivum L. is the most important cereal crops cultivated in the world. It is the source of a major energy needed by the human because of its high nutritional value, (high rate of carbohydrates and proteins) [1]. It also highlights the salt stress danger of through toxic, osmosis and prejudice in the balance of nutrients as well as in physical and chemical characteristics because it increases the speed of the demolition of cell processes and thus stimulate the plant to form osmotic organizations such as proline, glycine betanin, and that the organization of molecules is controlled on these routes. These engines are proteins and metabolic intervention materials in ion balance [2], as well as the reduction in photosynthetic activity for salt and toxic effects (specific toxic effects) such as those resulting from hormonal imbalance and generate effective oxygen species [3]and [4], study the growth of callus in different types of wheat (T. aethiopicum Jakubz., T. macha Dek. Et. Men., T. polonicum L., T. compactum Host. and T. aestivum L.) under stress conditions (0 and 1. 5%) of NaCl, the indicate that there were significant differences in fresh weight between concentrations and the mean was superior compared to other types T. macha Dek. et. Men. [5] studies the response callus induced from mature and immature embryos of three wheat varieties (Roshan, Niknezhad and Tabasi ) growth in the medium provider with 0, 70, 140, 210 and 280 mg / L of NaCl, and found that the average callus growth had been reduced by increasing of salt concentration and in which was Roshan gave the highest callus growth from mature embryos. [6] studying mutations in vitro to improve the endurance by exposing callus Sakha 93 and Sohag3 cultivars in-vito from immature embryos to salt concentrations of 0, 0.9 and 1.2%, and a found that the Sakha 93 var. was superior compared to other variety, which contained highest proline, salt concentration of 0.9% and exposed to 120 non-exhibition of gamma rays gave high proline content than the concentration of 1.2% which was exhibited to the same dose of gamma rays. In callus response (output of seeds) to salinity for several varieties of wheat (TJ83, Marav 2000 and Sindh81) under different concentrations of NaCl (75, 100 and 150 mM) [7] found that after 7 days of focusing salt, the carbohydrate content was high in Marav 2000 var. compared to other cultivars. [8] in their study to select tolerance varieties of wheat to salt stress in-vitro, in which they used six genotypes (Sebou, Anouar, Marzak, Ourgh, Tarek, Tomouh and Massa) and after induction callus resulting from immature embryos transfer to medium concentrations (4, 8.12 and 16 g / l) of NaCl, they found that Na concentration was increased while potassium behavior in different trend compared to sodium and Sebou genotype was superior significantly compared to rest genotypes in the endurance to salt stress. [9] study the effect of salt stress, which is concentrations of 50 150 and 180 mM of NaCl on protein pattern in wheat varieties (Sids1, Sakha69 and Gemmiza5) they found (in Sids1 var.) an appearance of molecular weights of 11, 35 and 46 KD in all concentrations of salt, but the treatment 50 and 150 mM of NaCl showed molecular weights of 52 and 68 KD respectively while Sakha69 variety gave 27 KD These weights not affected by salinity but formed three proteins weights molecular wihch is 11.52 and 68 KD resulted from the variety Gemmiza5 var. was found to be very sensitive to salt stress through the emergence of molecular weights 35- 48 KD under all salt concentrations, but the protein molecular weight of 46 KD were seen after treating this variety with 180 mM NaCl. [10] found in their study on the effect of salt stress in the growth indicators, and antioxidant enzymes in three varieties of wheat (Tekirdag, Pehlivan and Flamura-85) in-vitro prone to salt stress at the concentrations of (0-250 mM NaCl), there were an increase in the effectiveness of enzymes (Catalase and Peroxidase) resulted from exposure callus to salt stress conditions in which all varieties have followed the same behavior, but differed in their content of enzymes. Due to the importance of wheat crop, it had been chosen for this study by using different concentrations of salt because a lot of agricultural land in Iraq either saline or re-salinization which therefore targeted this experience to know the effect of salt stress in the cellular components of callus.

The Experiment was carried out at the propagation center of the date palm tissue culture, College of Agriculture, University of Kufa to study the effect of four concentrations of salt (0.0, 0.5, 1.0 and 1.5% NaCl) on the callus cells of Iraq wheat variety. Mature embryos of wheat as cereals was washed by running water for several times to remove dust, then left in the water for several hours, and after that sterilized with alcohol ethyl 70% for 10 seconds, then placed in hypo chloride sodium (minor commercial) for 15 minutes then washed with sterile distilled water several times to remove traces of material sterilization and then the mature embryo separated embryos sterilized in petri dishes sterile This process was done inside Laminer air hood flow and then put in agriculture tube containing MS add 2.5 mg/l (2,4-D) to induce callus and then after 4 weeks transfer callus to anther tube contains the same medium with the concentrations of salt (0.0, 0.5, 1.0and 1.5)% which left for five months this period with re- culture on the same medium and the same concentrations several times to maintain the callus and then the data were measured as follow:

Randomized complete design (CRD) was used and data were analyzed according to Genstat program and the means were compared according to (LSD0.05) [18].

Data in table (1) indicate that salt concentrations caused a significant effects on callus growth rate. Fresh weight of callus was declined sharply with increasing concentrations of NaCl in medium Notes from Figure 1 show that the average and the highest rate of fresh weight obtain from control and 0.5% treatment (0.0805 and 0.0636) g, respectively. While the was obtained at the concentration of 1.5% lowest rate (0.0307 g). The reason for this was that high concentrations of salt may lead to the inability of the cell to divide because of high osmotic pressure and the influence the ionian inside cells, as well as the lack in the ability of water and nutrients absorption due to decline in medium water potential.

As well as ion-induced toxicity by increasing concentrations of Na+ within the plant tissue [19]. The dry weight of Callus was highest significantly at control and 0.5% treatments where the dry weight concentrations (6.13 and 5.50) mg, respectively, which due to the increase in fresh weight.

Higher absolute growth rate of callus obtained of control and 0.5% concentrations (3.147 and 3.000) mg / day respectively and it was superior compared to other concentrations. The lowest rate obtained from 1.5 % reached (0.313 mg / day) It is due to that fresh and dry callus of Iraq wheat var. was optimum at these concentrations.

It linked also water from salty medium to reduce the toxicity of the salt ions at high salt concentrations in addition to its impacted on the protection of enzymes and cellular organelles [22], as well as its uses as storage for nitrogen, carbon and energy [23]. proline building materials in the cells (Glutamic and ornithine), used in conversion to proline acid by increasing enzyme activities involved in its construction [24] and increases the accumulation stimulate enzymes built.

Table 1. Effect of salt stress on growth indicators of callus after 5 months of agriculture in the salt medium.

Table 2. Effect of salt stress on physiological and biochemical components of callus after 5 months of agriculture in the medium salt.

Table 2 indicates that carbohydrates 1.5% salt concentration significantly compared to other concentrations of salt The lowest rate of carbohydrates was (2.4320 mg / g) was obtains from control treatment. The reason for this increase is due to lowest ability of callus in the transformation of simple sugars to complex sugars. Therefore, these organic compounds will work an important role to adapt to withstand salinity, where it works with proline effort to raise osmatic [26]. Sodium was significantly higher at 1.5% salt concentration component NaCl concentrations increase in medium the center has been at the (0.1050%), while the lowest rate (0.0131%) was obtain from control treatment in opposite of potassium concentration as high as possible and focus when control and (0.5%), where the focus was (1.125 and 0.638) %, respectively, while the lowest concentration of potassium was at (1.5%) NaCl (0.200%). The concentrations of 1.0 and 1.5 % gave higher effective of Catalase enzyme, and was the effectiveness of this enzyme at these concentrations were (0.1223 and 0.1570) Micromol / min / protein respectively. Catalase increases in callus was due to increases in salt concentrations to increase resistance to the conditions of stress acting on the induction voltage oxidative of increasing formation roots effective oxygen (ROS) such as Superoxidase, 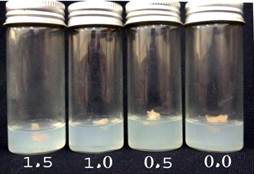 Fig. 1. Effect of salt stress on the growth of callus. 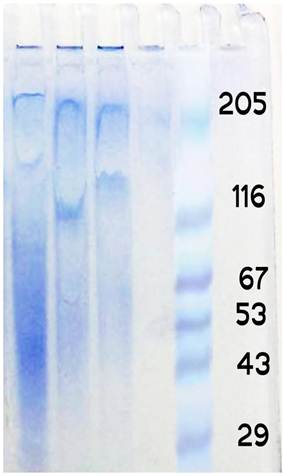