Absract: The objective of this study is to investigate the effect of the interaction between salinity and plant growth regulators (Kinetin and gibberellin) on the salt tolerance of two bread wheat cultivars (Dijilla) and (Tamooze-2) under salinity conditions. The present study was conducted to assess the effects of  Kinetin and gibberellin on plant dry matters (shoots and roots), chlorophyll content and stability in upper leaves, salt tolerance index, and organic contents in plant leaves of the two cultivars grown in salinized soils at two levels (0 and 16 ds/m). Seeds of both cultivars were sown in plastic pots which filled with the salinized soil in glass house during 2014-2015 sessions. Selected cultivar gave the highest dry matters, chlorophyll content and stability, and salt tolerance index under salinity condition as compared with local cultivar. Also the selected cultivar had the highest organic compounds in their leaves, especially under salinity condition. Both plant growth regulators were effective in increasing all the measured characters of both cultivars under non-saline condition but at salinity condition were effective in selected cultivar only. The Kinetin was more effective than the gibberellin in their effect on the salt tolerance of the plants under saline condition. Generally under these conditions the selected cultivar (Dijilla) was more salt tolerance than local cultivar.

Photosynthesis of plant is one of the primary processes more affected by a-biotic stresses, which more correlated with the shoot and root growth. Additionally, plant pigments such as chlorophyll are critical to the function and health of plants, and the concentrations of these pigments depend on the species and the surrounding environmental factors (2).Aldesuquy and Gaber(3) found that seawater at 25% induced significant reduction in soluble, insoluble and total photosynthates as well as ratio of soluble/insoluble photosynthates during growth and development of Vicia faba plants. Salinity adversely affects plant growth and development (4), enzyme activity (5). DNA, RNA protein synthesis (6) and mitosis (7).

Genetic variations in salt tolerance between species and cultivars are used to improve salt tolerance of wheat cultivars which gave more attention by the breeders to overcome salinity problems (8). The development of the technology and biotechnology technique is important achievement obtained providing a possibility to induce new salt tolerant cultivars effectively to reduce the adverse effects of salinity on plant growth and production in the most regions of the world. Plant breeders (9;4;10;8 and 11) have made significant achievements improving numbers of salt tolerant cultivars through plant breeding programs.

Cytokinins are important for plant growth and development including cell division, apical dominance, root formation, leaf senescence, stomatal behavior and chloroplast development (12). Roshotte et al. (13) suggest that Cytokinins modulate developmental processes in plants under environments stresses. Auxins and Cytokinins are important in plant growth because they interact in several physiological and developmental processes (14). On the other hand, Biddington and Thomas(15)reported that the differences in Cytokinins structure are likely to affect the function of the growth regulator. Plant growth regulators (PGRs) have been successfully applied to reduce the adversely effect of salinity on germination and growth of a number of species (16 and 17). Therefore, Gadallah (16) reported that at optimal concentrations of cytokinins have more beneficial effects on germination, growth, and yield of wheat under salinity conditions. PGRs could be the possible factors involved in priming – induced salt tolerance in plants. Therefore, pre-sowing seeds with cytokinins could regulate the changes in hormonal balance which induced by salt stress in wheat plants by interacting with other hormones(18). Also when plant exposed to salinity with application of Gibberellin, plant hormone and organic matter increased and caused biochemical, physiological and morphological changes and then increased the salt tolerance of plant under salinity conditions (19). Thus, the objectives of the present study are:-

2.   Evaluate the effect of plant growth regulators (Kinetin and Gibberellins) on the plant growth, chlorophyll content in leaves, and salt tolerance of the selected and local cultivars grown under normal and salinity conditions.

3.   Studying the effect of the interaction of salinity and PGRs on organic compounds in the leaves of the selected and local cultivars.

Effect of plant growth regulators on salt tolerance of selected and local cultivars were examined in saline soils experiment having two salt concentrations (0 and 16 ds.-1m). This selected cultivar was derived from plant breeding programs after 6 cycles of exposure and selection under high salinity levels of drainage water (30 ds.-1m). Salinity level was prepared by mixed two kind of soils differed only in their saline degree (EC). Using electrical conductivity meter to determine the degree of the above level. The experiment was carried out in plastic pots, which filled with salinized soils (3 Kg in each pot). The pots were set up in a glass house in completely randomized design with three blocks, each pot contained one observation. The total of pots was 36 (2cultivar × 2saline level × 3plantgrowth regulator ×3 blocks), 8 seeds of each cultivar were sown on each pot. All treatments were carried out during growth stages. Seeds and plants were watered with tap water (300 mill/pot) according to the field capacity. Plant growth regulators (PGRs 600 mg.-1L) treatments were applied on shoots of all observations after 75 days from the sowing date. Plant growth regulators were sprayed on the shoots once only. The chlorophyll content in the upper leaves was measured at one week before the harvested date by using chlorophyll meter. Plants observation were measured after 4 month from the sowing date and 45 days from the plant growth regulators application. The organic components contents in the leaves of both cultivars at each salt level and PGR treatment were estimated according to the methods as mentioned in Al-Mishhadani, (2015). The following characters were measured after oven drying for 3 days at 70 0C.

The data were subjected to analysis of variance according to the experimental design (Table 1).

Table 2. Effect of the interaction between salinity and growth regulator on shoots dry weight (g/pot) of the wheat cultivars.

Table 3. Effect of the interaction between salinity and growth regulator on roots dry weight (g.-1pot) of the wheat cultivars.

Table 4. Effect of the interaction between salinity and growth regulator on chlorophyll of the wheat cultivars. 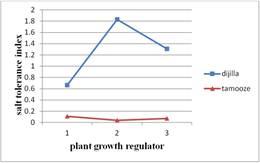 Table 5. Effect of the interaction between salinity and plant growth regulators on organic compounds percentage of wheat cultivars.

High salinity level was adversely affected plant growth (Tables 2 and 3) through its effect on water absorption by inducing a decrease in cellular permeability of water (20), and also through depresses meristematic activity and cell elongation and division (21). These effects were evidenced in the present study as the reduction in fresh mass of the salt stressed plants by 16 ds.-1m of salinized soils as compared to the control (0 ds.-1m). Moreover, dry mass of the salinized plants was also decreased by 16 ds.-1m, may be as a results of the limited photosynthesis production (22) and of the reduction in numbers of leaves and tillers.

The superiority of selected cultivar (Dijilla) over the local one under high salinity level (16 ds.-1m) may associate with high chlorophyll content in the upper leaves (Table 4), which is important factor in photosynthetic and then determine the dry matter production (29 and 30). Increasing dry matter is very important in plant growth, tissues extension, and; yield and its components production. Under salinity conditions, increasing chlorophyll content in upper leaves of plant due to the modification in morphological characters as a mechanism to tolerate salt stress (31).

Plant growth and chlorophyll content enhancement with PGRs have been successfully applied to counteract the deleterious effects of salinity on plant growth (Tables 2, 3 and 4). Generally, plant growth was improved by application of kinetin and Gibberellin under salinity conditions only in selected cultivar (Dijilla) as compared with control (no PGR treatment), while at non-saline conditions the growth of both cultivars was increased as compared with control (no PGR treatment). Similarly Angrish et al. (32) reported that applied PGRs to reduce the adverse effects of salinity on germination and plant growth. From these results, kinetin was more effective than Gibberellin at both conditions. On other hand, they reported that cytokinins are important signaling molecules in plants (13) and interact with other plant hormones in the regulation of plant growth and development. Also Aldesuquy et al. (33) reported that kinetin was the most effective in increasing shoot dry weight and grain yield of cultivar under salt stress. It has been reported for a number of cultivars that salinity can reduce the cytokinins production and export from the root to the shoot (34). Therefore an adequate shoot cytokinin supply is essential for normal growth and development. The most effectiveness of kinetin to promote later plant growth and yield production because application of kinetin and gibberellin increase chlorophyll content and its stability in leaves (Fig. 2) which was very important for dry mass production and increasing yield and its components under salinity conditions. Accordingly, the result of this study (Fig. 1) showed that the kinetin and gibberellin increased salt tolerance index in plant especially in selected cultivar under salinity conditions as compared with those of the control (no PGRs treatment), but the kinetin more effective than gibberellins. This refers to the effect of kinetin and their interaction on leaf area, pigment content, photosynthetic activity, chloroplast ultra structure of flag leaf and controlling the distribution of dry mass in shoot to alleviate the damage induced by salinity. On the other hand, the inhibition of leaf area and number by salt stress was alleviated when the grains were soaked in kinetin (33). This recovery may due to the role of kinetin in increasing the rate of movement of nutrients and hormones from root toward the developing leaves, and thus increasing the rate of leaf expansion and activities. Therefore, all these processes improve the response of plant to the salinity and increase the salt tolerance degree. More studies are going to determine the best concentration and growth stage for application of plant growth regulation (Kinetin) to increase salt tolerance of plant. Under high salinity condition, the selected cultivar Dijilla was more salt tolerance than local cultivar (Tamooz-2) under high salinity (Fig 1), and it contained high organic compounds in their leaves (Table 5). This means that there was high correlation between the salt tolerance degree and organic compounds contents in the leaves. Because it would be essential to balance the osmotic pressure of the cell cytoplasm and also to allow turgor maintenance of cells that would otherwise dehydrate (35). In addition, they reported that their compounds could stabilize the membrane proteins and so maintain growth at high salinity levels. The benefit of these compounds on response of plant to salinity increased with application of plant growth regulators (PGR) under salinity condition. Therefore, application of PGR is very important factor for increasing salt tolerance in plant.