1Dept. of Biology, Faculty of Mathematics and Natural of Science, University of Lampung, Bandar Lampung, Indonesia

Abstract: Ground orchid (Spathoglottis plicata Bl) is an ornamental plant widely appreciated by the public because it has a beautiful shape, colour and flower formation. One of trigger decrease of S. plicata production caused by Fusarium wilt which is caused the Fusarium oxysporum. Using resistant S. plicata cultivars are expected to be an alternative to control the disease. A resistant S. plicatta plantlet to Fo has been initiated by in vitro selection on medium countaining fusaric acid on different concentrations. This study aims to determine the peroxidase activity and total phenol of S. plicata plantlet. Research conducted at the in vitro Laboratory, Department of Biology, Faculty of Mathematics and Natural of Sciences, University of Lampung. The study design was Completely Randomized. Data analyzed using Analysis of Variance and if significantly different followed by Least Significant Difference (LSD) test 5% significance level. The results showed that increasing the concentration of fusaric acid, it also increases the peroxidase enzyme activity and total phenol in plantlet that resistant to F. oxysporum. At a concentration of 40 ppm, peroxidase activity and the highest total phenol content are 0.536 unit/mg/second and 10.33%.

The cultivation of orchids have many obstacles, one of which is fusarium wilt which is caused by Fusarium oxysporum [10]. One of business that is efficient and safe to control F. oxysporumwas by using eminent varieties which are resistant to the fungus [9]. Cultivars that are resistant to F. oxysporum infection can be identified by in vitro selection in a medium supplemented with fusaric acid [3]. Some of parameters that can be explained the mechanisms of plant resistance to pathogen infection include are increase of phenolic compounds, peroxidase enzymesactivity [17].

Fusaric acid (5-n-butylpicolinic acid) is a non-specific mycotoxin produced by F. oxysporum that causes symptoms of wilt and rot in plants [11]. There was a positive correlation between resistance to the toxin plantlets with plant resistance to Fusarium [2]. Using fusaric acid at a toxic concentration causes plant to be death, furthermore non-toxic concentrations (below 10-6 M) helped induce phytoalexin synthesis, a form of the response of plants to inhibit the activity of pathogenic [4]. Using selectors fusaric acid as the agent in vitro selection may produce mutant cell or tissue that is insensitive to fusaric acid, therefore after being regenerated into plants can produce strains that are resistant or tolerant to pathogen infection. This method had been carried out among others on the plant plantlets vanilla [9], showed resistance to fusarium wilt. Up to now, using fusaric acidin concentrations tolerant not conducted yet to induce resistance in plantlet ofS. plicata against F. oxysporum. Therefore, this research needs to be conducted.

This research was conducted in the in vitro Laboratory, Department of Biology, Faculty of Mathematics and Naturalof Sciences, University of Lampung, from January–March, 2016.

Orchid plantlets of Spathoglottis plicata Bl aged 6 months sterile in culture bottle. This material had propagated by in vitro and had selected by fusaric acid concentration of 0 ppm, 10 ppm, 20 ppm, 30 ppm and 40 ppm in the preliminary study. Fungal isolates F. oxysporum obtained from the personal collection of Dr. Endang Nurcahyani, M. Si.

2.3. Inoculation and Test of Resistance Fusarium oxysporum in plantlets of Spathoglottis plicata Bl

Inoculation of Fusarium oxysporum directly conducted on plantlets. It was conducted in a culture bottle according to the method [6] with a density of 1.7 x 104 spores per ml is dripped onto the plantlets 1-2 drops, then incubated at room temperature for 24 hours. Observations carried out starting the third day after inoculation for four weeks by observing and counting the number of leaves that show symptoms of wilting or yellow.

The Characters of S.plicata plantlets related to resistance to F. oxysporum could be viewed by the peroxidase enzyme activity and total phenol

Peroxidase enzyme activity was analyzed by [13]. It was created a mixture of 1.5 ml of 0.05 M pyrogallol, 0.5 ml of enzyme extract from the leaves of plantlets of S.plicata, and 0.5 ml of 1% H2O2. The mixture was precipitated at room temperature and put in a cuvette size 0.5 ml. Spectrophotometer set with a wavelength of 420 nm and readable from zero. In the initial phase was added 100 ml of 1% H2O2 in cuvette which had contains a mixture of sample and read for 5 minutes. The enzyme activity was calculated by U/mg/ min. One unit of activity is changing optical dencity (OD) 420 nm on a spectrophotometer per minutes.

Gallic acid was used as a standard solution. Pure concentration of gallic acid used were 10, 20, 30, 40 ppm in distilled water. Each concentrations was taken as 0.5 ml and added to 100 ml volumetric flask, then add 2.5 ml reagent Folin-Ciocalteau and 2 ml of 7.5% sodium carbonate after mixed inserted into the cuvette and seen the value of absorption at a wavelength of 765 nm, use distilled water as a control. After result had known, in the next steps standard curve must be created, and seen the regression equation between the concentration of gallic acid and uptake value.

2.4.4. Preparation of the Samples Plantlets

Ground orchid plantlets with weight 2 g crushed using a glass mortar and dissolved in 25 ml of 80% ethanol (Sigma Chemical Co). Furthermore, centrifuged the solution at 13,000 rpm for 15 minutes. After centrifuge the supernatant was taken.

The supernatant was taken as 0.5 ml was added to 100 ml volumetric flask, then added 250 ml of Folin-Ciocalteu reagent, after settling for 5 minutes and then add 1 ml of Na2CO3. When blended, was added to 5 ml volume cuvette premises and observed absorption value at a wavelength of 765 nm using a spectrophotometer, use distilled water as a control. From the absorption value determined content of phenolic compound gallic acid regression equation of the connection between the absorption value plantlets ground orchid extract and gallic acid concentrations series.

Data obtained from growth of ground orchid plantlets S. plicata during the selection with fusaric acid was quantitative and qualitative data. The qualitative data presented in the form of a comparative descriptive and backed photos. Quantitative data of each parameters analyzed by analysis of variant, performed on the 5% significance level and a further test with Least Significant Difference (LSD) at the 5% significance level.

Fusarium oxysporum which was used in this study is in the form of monospora. F. oxysporum colonies grown on Potato Dextrose Agar (PDA) medium having white on the bottom and the top surface. Isolates monospora used to obtain a uniform and stable nature of F. oxysporum was expected to provide consistent results [18] on the test used ground orchid plantlets. Inoculation method used in the endurance test plantlets of Spathoglottis plicata which is given essences of fusaric acid was by directly inoculating microconidium of F. oxysporum with a density of 1.7 x 104 spores per ml in 1-2 drops plantlets in culture bottles were incubated at room with temperature (25°C) for 24 hours [6]. Observations were made every day for 4 weeks by counting the number of leaves that show symptoms of wilting plantlets. Based on the observations of ground orchid plantlets were scanned, symptoms of wilting leaves at the controls appear on day 4 after inoculation. Colonies of F. oxysporum monospore are presented in Figure 1. 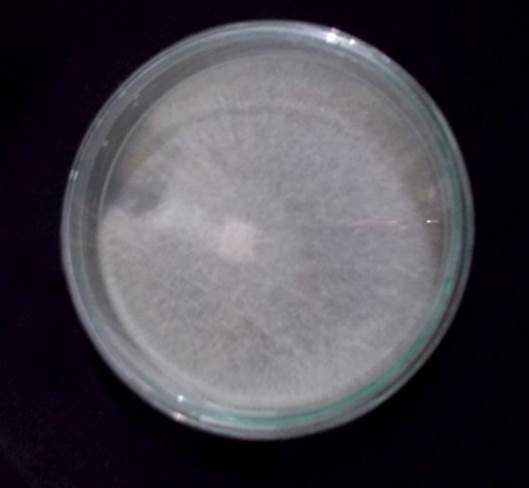 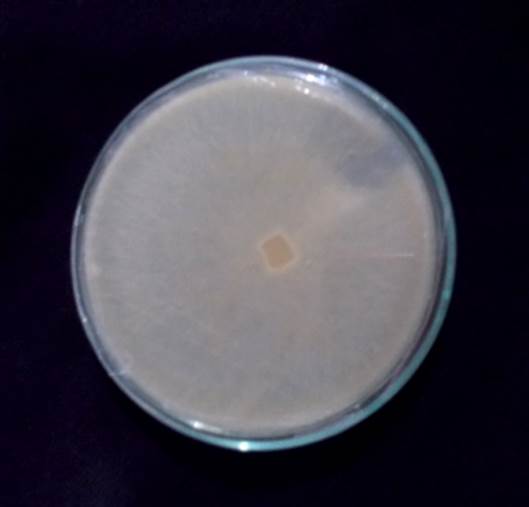 One of indicators mechanisms of resistance in S. plicata induced is increase of phenolic compound plantlets inoculated with F. oxysporum by in vitro. Phenol compound is result of plant metabolism which is formed by one of functions as an immune system chemical plants shown by the formation of a chemical compound that is capable of preventing the growth and development of pathogens [17]. Before observing phenolic compounds in plantlets of S. plicata for each treatment, measurements were taken by using a standard curve prior gallic acid to estimate the total quality phenol with a linear regression [1]. From measurement of the standard curve generated a linear regression equation (y= 0.001x + 0.002) and has a value of correlation (R2= 0998) it shows the diversity is homogeneous between gallic acid concentration with absorbance. Based on the standard curve gallic acid, it can be searched total phenol content of each treatment based on the equation of the regression line (Table 2).

Results from induce of Spathoglottis plicata orchid plantlets against Fusarium oxysporum that have selected using fusaric acid at a concentration of 10 ppm, 20 ppm, 30 ppm and 40 ppm in medium VW are able to increase the activity of peroxidase and total phenol content in Spathoglottis plicata planlets compared with controls, peroxidase enzyme activity and total phenol content are corelate with increase of fusaric acid stress.