Abstract: The Indian Pharma industry is on a robust growth path and is likely to be in the top 10 global markets in value term by 2020. Indian pharmaceutical sector accounts for about 2.4 percent of the global pharmaceutical industry in value terms and 10 percent in volume terms and it is expecting to expand at a Compound Annual Growth Rate of 15.92 per cent to US$ 55 billion by 2020. By 2016-17, India is expecting to be the third-largest global generic Active Pharmaceutical Ingredient merchant market. This study seeks to describe the status of Indian pharmaceutical companies, their position, ranking, financial status and forecasting of future opportunities based on the financial predictors i.e. Net sales, total share capital net profit, total assets, total income. The ranking of the top 10 companies’ changes drastically when they ranked based on total share capital and net profit. The financial stability of the companies can be described as they contribute more in market capitalization but are lagging behind in the ranking based on net profits and total share capital.

India has always been an important contributor to the global pharmaceutical industry with its large domestic market, impressive growth rate over last few years and due to that, it has become one of the sunrise sectors of the Indian economy. [1]

Total Income - Revenue may refer to business income in general, or it may refer to the amount, in a monetary unit, received during a period.

Net Profit – Often referred to as the bottom line, net profit is calculated by subtracting a company's total expenses from total revenue, thus showing what the company has earned (or lost) in a given period of time (usually one year). It also called net income or net earnings. [7]

Total assets - Total assets refers to the total amount of assets owned by a person or entity. Assets are items of economic value, which are expend over time to yield a benefit for the owner.

Net Sales- Net sales are the amount of sales generated by a company after the deduction of returns, allowances for damaged or missing goods and any discounts allowed. The sales number reported on a company's financial statements is a net sales number, reflecting these deductions. [8]

Net Profit Margin - Net profit margin is the percentage of revenue left after all expenses have deducted from sales. The measurement reveals the amount of profit that a business can extract from its total sales. The net sales part of the equation is gross sales minus all sales deductions, such as sales allowances. [9]

Quick Ratio - The quick ratio is a measure of how well a company can meet its short-term financial liabilities. Also known as the acid-test ratio, it can be calculated as follows: (Cash + Marketable Securities + Accounts Receivable) / Current Liabilities.

Cash Ratio - The cash ratio is the ratio of a company's total cash and cash equivalents to its current liabilities. The metric calculates a company's ability to repay its short-term debt.

Debt Equity Ratio - The debt-to-equity ratio (D/E) is a financial ratio indicating the relative proportion of shareholders' equity and debt used to finance a company's assets. Closely relate to leveraging, the ratio known as Risk, Gearing or Leverage. [10]

According to article "TOP 10 PHARMA COMPANIES IN INDIA 2016" Published16Jan 2016 at Listz Web page: The total revenue generated by pharmaceutical companies in India in the last financial year was more than 20 Billion dollar, which is expected to cross the mark of 26 Billiondollar by 2016.

According to article "Indian Pharmaceutical industry growth intact amid current headwinds faced by industry"Published Jan 2013 at Web page Express Pharma: The Indian Pharma industry is expecting to be among the top 10 global market in value terms by 2020, bolstered by increasing domestic demand. The Indian Pharma industry stood at Rs 629.0 Billion in FY12, registering year growth of 16 percent and expected to reach around Rs 55 billion by 2020. [4]

3. The Significance of the Study

This study helps to all stakeholders who connected to concern Pharma Company can know the status of respective Company.

It can help a pharmaceutical company to understand the need and address the problem, make a foothold through creative marketing to acquire a good market share for their product, make possible strategy to solve the problem so that they improve the performance of the company and predict the future opportunities.

• To forecast, the future sales opportunities of concern pharmaceutical company based on their previous sales data.

The methods of data analysis were both qualitative and quantitative. A quick impressionist summary used where the results were obvious and required no further analysis. Tables, graphs and charts used to present findings where applicable.

Researcher has used different parameter to check the significant dependency and independency with the Total market capital of Pharmaceutical Company. SPSS and advance excel were used for regression analysis at 95% level of confidence.

b. All requested variables entered.

These variable can influence the Total Market Capital, Variables are:

• The Indian Pharmaceutical Industry possesses dynamic characteristics and various companies contribute to the characteristics among which the above-mentioned companies are studied and its amount of contribution to the industry is determined by the graphical figures.

• It also inferred that the famous big players i.e. Dr. Reddy, Lupin and Aurobindo Pharma face tough competition from each other in the market and are in a very close competition in acquiring the rank in the top 10 Pharmaceutical Companies.

• Sun Pharmaceuticals rated as the leading company in the industry has thrown double sales than the other players in the market.

• Cipla acquires the third position based on the net sales ranking whereas it takes the fourth position in the ranking based on market capital, which shows that wide variety of products range in Respiratory segment contributes to the increased sales.

• Torrent Pharmaceuticals takes a leap and a jump to acquire the seventh position and GSK takes the last, showing the strong variability in ranking based on net sales v/s ranking based on market capital. 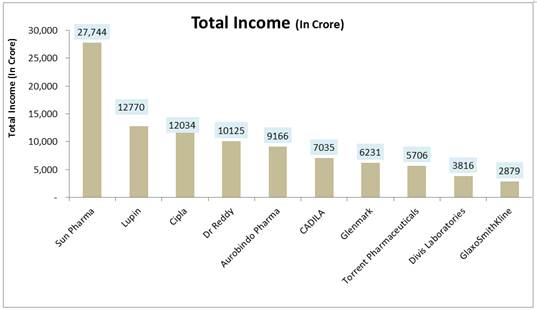 • In the FY 2015 -2016, since Cipla generated increased sales than Dr. Reddy’sthus, it has more income also; and it shows a marginal difference in the total income of Lupin and Cipla.

• Thus, the ranking shows Cipla taking the third position in the market. Cipla’s portfolio focus is on respiratory, oncology, and anti – infective that accounts for the majority of total income earned and in turn helps Cipla to take lead over Dr. Reddy. 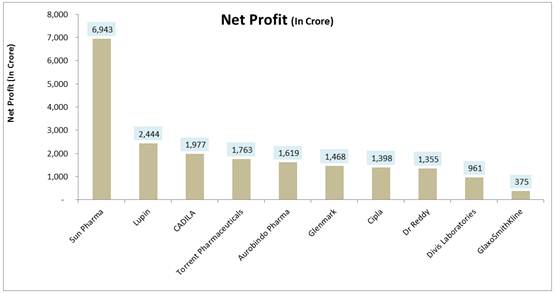 • Cadila Pharmaceutical Ltd being fifth or sixth position in the ranking based on market capital, net sales and total income takes a big jump to the thirdposition, and it indicates that Cadila is a profit-orientedcompany.

• It inferred from the ranking based on net profitthat, Cipla takes a back step on the ranking ladder at the seventhposition that indicates the less profit margin of Cipla as compared to other companies. In addition, the investment share of Cipla in R&D expenditure is very significant and thus it has fewer profit margins.

• Torrent Pharmaceuticals jumps to the fourth position from the seventhposition, which indicates that the company has significant profit margin. 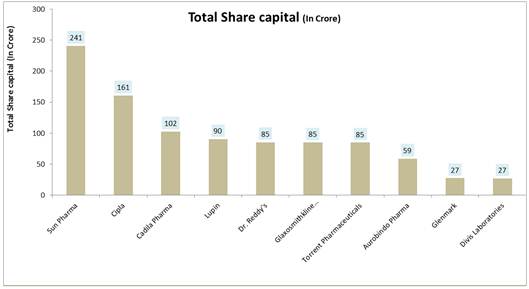 • Share Capital indicates the money invested in a company by the shareholders, thus it can be inferred that Cipla and Cadila has more number of shareholder investors and it has goodlong-term sources of finance. 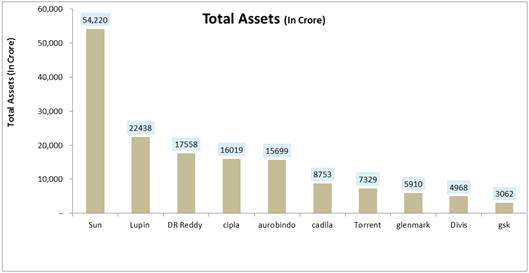 • The above ranking, based on the total assets a company has which shows that Sun Pharmaceuticals has good financial position in the market.

• GlaxoSmithKline taking the last rank in the domestic market shows that it has an unstable financial position.

• The domestic pharmaceutical companies as Sun Pharmaceutical, Lupin and Cipla performance has greater amount of variance in terms of sales. Year wise most of sales were higher than their mean sales.

• Whereas, Aurobindo Pharmaceuticals, Cipla and Glenmark performance is average and yearly sales were near to average sales.

• Since Dr. Reddy’s has good amount of market capital and total assets, still most of the company’s yearly sales is less than the mean sales.

• Sales forecast is an estimate of sales during a specified future period, whose estimate is tied to a proposed marketing plan and which assumes a particular state of uncontrollable and competitive forces.

• The above graph of sales forecasting shows that Sun Pharmaceuticals will almost double its sales and will remain the biggest player in the market with an efficient marketing plan and also taking the lead in the market with tough competition.

• The Industry would face tough competition between the major Indian Companies like Lupin, Dr. Reddy’s, Cipla and Aurobindo Pharmaceuticals.

• In addition, the graph indicates that GlaxoSmithKline would not have a significant change in its sales in the year 2020. GSK should have to increase CAGR to increase the sales in coming year and grab the market share in Indian pharmaceutical industry.

There exists a variable ranking of the top 10 companies in the Indian Pharmaceutical Industry. Each input variable contributes to a different ranking position of these companies. The ranking of the top 10 companies’ changes drastically when they are rank based on total share capital and net profit. The financial stability of the companies can be revealas they contribute more in market capitalization but are lagging behind in the ranking based on net profits and total share capital.

The understanding of market dynamics and adapting to them quickly is a huge strength that India has. Indian domestic market is engrossed with tough competition and it serves asan opportunistic market to all the pharmaceutical companies.